It’s January. In my book that means cold-weather cuisine. Nothing hits the spot like meat on the bone, which after long, slow, braising is rendered more tender and flavorful than any other cut. I’m referring to shanks, short ribs and oxtails.  Something truly special happens as these otherwise tough bovine cuts are transformed into delicacies. 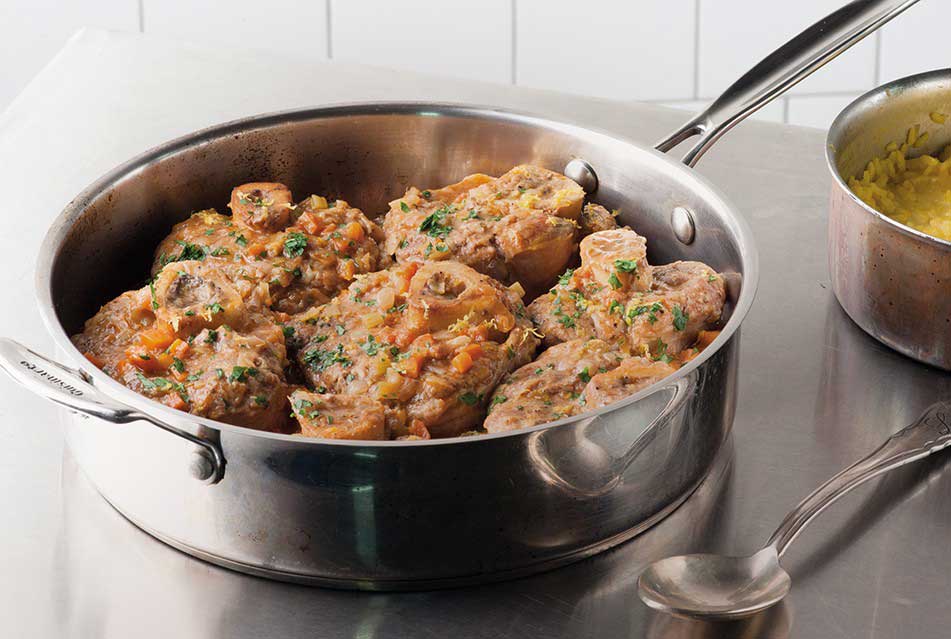 Ossobucco or “bone with a hole,” is made from cross-section slices of veal shank. This hard-working part of the animal literally resembles donuts of meat wrapped around sections of marrow bone.  This classic Italian dish is typically made by seasoning and dusting the shank slices in flour, browning them well, and then braising them in white wine and broth, along with diced vegetables, until the meat is literally falling off the bone.  As the meat cooks, the cooking liquids thicken into a luscious sauce that is finished with diced fresh tomato and a traditional “gremolata” of fresh chopped parsley, optional garlic and a scatter of fresh lemon zest, which serves to lighten and brighten the entire dish.  Serve it with the classic pairing of Risotto Milanese and this dish may become one of your new favorite special-occasion meals. 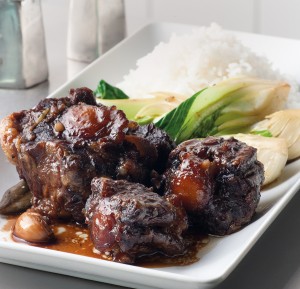 Oxtails look somewhat like Ossobucco, only they’re much smaller, so you’ll want to have plenty. Oxtails always make me think of my friend Ron, whose mother hailed from the Philippines. She introduced our group of friends to that country’s marvelous food. Goat, mussels with bitter melon, pancit and those super tasty, meat-wrapped bones (oxtails) come to mind.
Mrs. Decanay simmered her oxtails in vinegar and soy, which reduced down to a broth-like glaze. She served them with steamed jasmine rice and plenty of sriracha sauce. The resulting dish was a study in spectacular simplicity.  I remember being one happy teen when I ate dinner at Ron’s house. It didn’t even occur to me that being introduced to these different flavors would help to shape my culinary future. If you like the more tender bits of braised goodies Ω and licking your fingers as you nibble between the little nooks and crannies to get to the good stuff Ω then you will love oxtails! 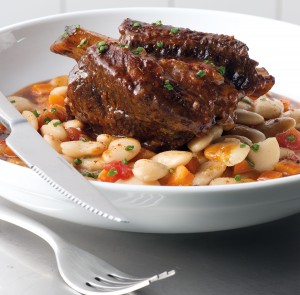 Thanks to the growing interest in all things barbecue, more and more people are falling in love with the world of slow-cooking with smoke. As a result, smokers have become backyard staples, not to mention the number of take-out shops that are on the rise.  At this time of the year, even the most die-hard barbecue aficionado might have to throw in the towel and give in to Mother Nature.
If you find yourself not wanting to brave the cold, try an easy-to-prepare barbecue fix that utilizes short ribs. When rubbed with barbecue seasoning, roasted and then braised in broth-thinned barbecue sauce, this cut of meat becomes deeply flavored, tremendously tender and supremely satisfying. Serve them over luscious butter beans and I guarantee the combination will get you through your craving. Just think, only another two months until you can fire up the grill or smoker!