Farm-to-table American cuisine, a dash of history and an unparalleled view of the Susquehanna River

The restaurant makes its home in a 27,000 square-foot brick building that was constructed in 1916 as a warehouse for the Wilton foundry and was used as a silk mill from 1932 until the early 60s. “We have guests who have some connections to the mill, and it’s really interesting to hear their stories,” says Executive Chef and Director of Operations Jim Switzenberg, who is one of the restaurant’s partners.

A graduate of the Culinary Institute of America, he had worked at restaurants in New York City, Houston and Los Angeles and served as the senior instructor for HACC’s culinary program prior to coming onboard at John Wright to oversee the restaurant’s expansion in 2011.

The restaurant’s rather humble beginnings date back to more than 25 years ago, when it served as a sandwich shop for patrons of the John Wright Factory Store. During the summer, a tent was erected to allow guests to enjoy outdoor dining – mainly breakfast and lunch – with a river view. “If only you served dinner,” guests repeatedly said.

Their pleas were answered. Today, the restaurant serves a full menu and has continuously worked to enhance its spectacular riverfront setting. The Four Seasons dining area, which is housed in a climate-controlled, glass-enclosed, timber-frame structure with floor-to-ceiling windows, seats 160. “We really have two restaurants,” Jim says, referring to the Four Seasons Room and the patio. “With the warm weather, there’s a whole different vibe,” he says of the 400-seat patio that features indoor/outdoor bars and a wood-fired Italian pizza oven.

Jim notes that the upstairs patio is a great place to take in Fourth of July fireworks. The patio is situated off the 180-seat River Room – a banquet area that boasts a separate entrance, exposed brick walls, beautiful wood floors and a bar. The restaurant’s setting makes it a perfect place for an outdoor wedding ceremony by the water and reception with a view in the River Room. Brides will enjoy the bridal suite with its separate entrance, parlor and small salon.

Those who enjoy outdoor adventure will find something to capture their interest. Outfitter Shank’s Mare has a kiosk on the grounds during warmer months. John Wright works with Chiques Outfitters, as well. “We sit on the Mason-Dixon Trail, and other trails are located nearby, so we see a lot of bicyclists and other outdoor enthusiasts,” Jim says.

John wright’s focus is on local – the barstools, dining tables and outdoor bars were built by a local craftsman who repurposed wood from fallen trees. The wine cellar, which is located behind the reception desk, was crafted across the street at Donsco.

As for the food connection, “We are all about local and non-GMO products. We work with local farmers, including those from York’s Horn Farm Center, for produce, meat and dairy products,” Jim reports. Last year, for the first time, all the potatoes used year-round in the restaurant (except for those that are used to make fries) were grown in York County. The winter menu featured shrimp and grits, which Jim describes as “the old-school stoneground grits.” Fish (including the farm-raised salmon) and seafood are sustainably harvested. “Our ‘fresh catch’ is just that,” he says.

Even the bar’s offerings reflect the local philosophy. Peaches, for example, are used in a house-made, infused, peach-flavored vodka, while blackberries are the definitive ingredient in a blackberry brandy.

“In-house” is also a tenet of John Wright’s kitchen. Beef for burgers is ground in-house. Sausage is made in-house, as is the sauerkraut. “We work with the farmer who raises the pigs, and they’re fed leftovers and veggie scraps from the restaurant,” Jim continues. Bread is also made in-house (with the exception of sliced bread, which is sourced from the Lancaster Food Company), as are the desserts.

The restaurant hosts a number of special events throughout the year, including cigar dinners, Oktoberfest, WOW (Wags on Wright, a dog-friendly event that’s a partnership between the restaurant and York County SPCA), River of Lights and Light the Night, which are two Leukemia & Lymphoma Society events. “We try to be community friendly,” Jim says. 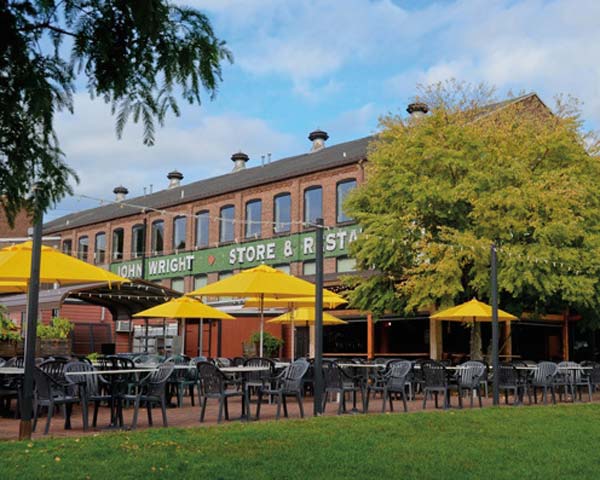 The ultimate in al fresco dining has become a John Wright trademark.