Carol and Pete Heth have been transforming homes for the past 35 years. Finally, they decided it was time to concentrate on their own home.

The Heths’ farmhouse, which dates to the 1860s, has been their home for nearly 35 years. Prior to the Heths moving in, Carol’s grandparents owned the house. During the Heths’ tenure, it has gone from the home of a growing and busy family (three children) to one of empty nesters (and devoted grandparents of five).

Now that it was just the two of them, Carol deemed it was time to make the house their own. She wanted it to reflect the interests she and Pete share, namely cooking and art. Both had become bona fide foodies and were leading a healthy lifestyle. Out went Carol’s recipes that were heavy on carbs, fat and sugar and in came fresh vegetables, grains, lean meat, free-range chicken and seafood. “We eat vegan a lot,” she says. “Our kids wonder where their parents went.”

Cooking became a hobby they share with each other and with the guests they invite for dinner. “I’m at Central Market every Friday,” Carol says. Cookbooks became preferred reading.

The Hheths’ new lifestyle essentially inspired their home’s makeover. Fortunately, Carol and Pete not only cook together, but they have also worked together since Pete launched his construction and remodeling business 35 years ago. The two met as students at Hempfield High School. Carol was always enthralled by art, while Pete, a transplant from the Midwest with a background in farming, was talented in anything that entailed working with wood.
It was only natural that Carol and Pete collaborated on his projects. They’re two of a kind, always looking to do something out of the norm, and having the foresight to buy and/or save materials and products they can use down the road. “Things might sit around for years, but we always find a use for them,” Pete says. Carol adds, “I buy things in anticipation that they will work at some point.”

Now in their late 50s, they say it’s time to enjoy the fruits of their labor. Pete no longer feels compelled to take on jobs that entail extensive travel time. “I’m happy working on second and third projects for clients who have become our friends,” he says.

Home entertaining was the driving force behind the design plan. “We essentially switched the flow of the house,” Carol explains. A small kitchen at the front of the house was replaced by a foyer and powder room. The living room became a dining room that can easily accommodate 16. A sleek media room replaced the original dining room. And the series of rooms at the rear of the house that contained a family room, spa and makeshift commercial kitchen gave way to a fabulous kitchen and breakfast room. “It was a tough space to design,” says Pete, referring to its long (45 feet) and narrow (12 feet) dimensions.

However, the dimensions had their advantages. The Heths’ dinners had grown into events. Guests no longer arrived to simply take a seat at the dining table. They began helping to prepare the multi-course meals. As a result, Carol envisioned having a series of prep areas in which teams of guests could carry out their duties. She also wanted to incorporate art into the space. An abundance of natural light was also on the wish list. And, she didn’t want typical doors for her cabinetry.

Pete had his own ideas, as well. He always wanted to incorporate a barrel-shaped ceiling into one of his projects and felt this one would be perfect. He points to the Bellagio Hotel in Las Vegas as his inspiration. However, in executing his design he relied on Lancaster County ingenuity and used what he calls “barn tin” to line the barrel-shaped ceiling. “I’d been saving it,” he says of the tin.

The idea for the makeover took root nearly 10 years ago when Carol and Pete called upon Dennis Shenk at Horizon Kitchens. He provided a computerized “cabinet vision” image of the proposed space, which according to Carol, provided them with a start. Two years passed. When designer Kevin Martin joined the company, he worked on two projects with Carol, and the two clicked. She asked Kevin to take a look at her kitchen and offer some ideas. Working off Dennis’s plans, Kevin created a CAD image that literally brought the space to life as it provided a “picture” that added functionality and aesthetics to the original snapshot. According to Kevin, “Carol became really excited” about the possibilities the space offered.

The design process began in earnest, with Kevin serving as the engineer and acting as the sounding board for Carol’s ideas and the yes (or no) man for Pete’s construction-related suggestions. “It was a true collaboration of creativity, function and craftsmanship,” Kevin remarks. It then became Dennis’s job to execute the “think-outside-the-box” cabinetry that fills the kitchen and media room.

“This was a really fun project to be a part of,” says Kevin. “Carol had the courage to be different,” he says, referring to the multiplicity of colors, textures and sheens she incorporated into the design. “I would estimate we used triple the amount that is normally used in a kitchen,” he explains. “She didn’t play it safe. Every idea is good by itself; the challenge is to make them all work together, and she achieved that.”

Carol and Pete concur, pointing out the fact that there’s so much to ingest (and digest) that guests rarely comment on the dimensions of the kitchen. 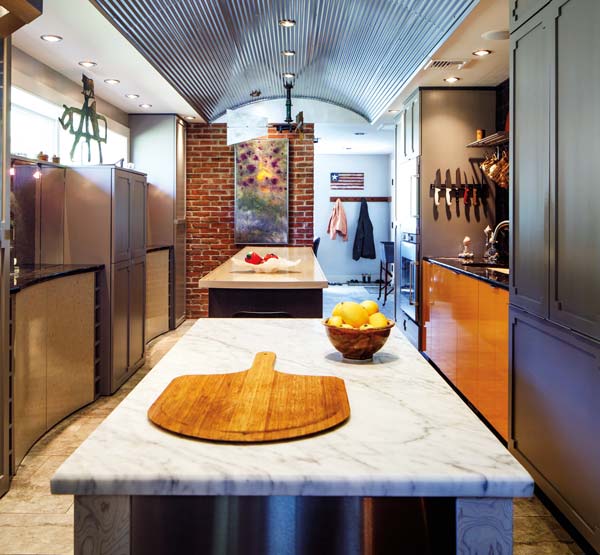 The Heths’ kitchen, with its series of islands and other prep areas, provides the perfect working environment for the many dinners they host. The barrel-shaped tin ceiling – something Pete always wanted to incorporate into a project – was inspired by the Bellagio Hotel in Las Vegas.