Where has the summer gone! It seems like only yesterday that over 1,200 revelers – festively dressed in white – gathered at Clipper Magazine Stadium for a BYOE (bring your own everything) party that celebrated summer’s arrival.

At the center of the glamorous party’s vortex is April LaMon, who was inspired by Dîner en Blanc – the annual event held in Paris to commemorate the longest daylight-filled day of the year. At this 25-year-old picnic, dressed-in-white Parisians pack their own white tablecloths, dining necessities and decor for an outdoor experience unlike any other. The actual location  – somewhere in Paris – is only revealed on the day of the event, shared through social media and the Internet.

The concept has grown to become an international franchised event that is celebrated in at least 17 cities. April saw Lancaster’s take on the party a bit differently: a free, non-sponsored event, supported by the collective energy of local vendors, inclusive of the entire Lancaster community and promoting diversity. French for “party in white,” the renamed Fête en Blanc Lancaster was created to “bring the community together and celebrate the city,” says April.

With the two requirements of being an outdoor venue and within the city of Lancaster, April and her small committee have surprised (and delighted) those who attended the previous three events with the unexpected venues of Musser Park, where 92 people sweltered in 103-degree heat; Excelsior, pre-renovations, where 138 dined and danced to live music; and last year, the Shreiner-Concord Cemetery (whose most notable gravesite is that of Thaddeus Stevens), where attendance grew to 500. Fête en Blanc Lancaster became the buzzword.

The power of social media and word-of-mouth swelled interest in 2015’s event to 1,200 – more than a modest neighborhood cemetery or most venues, for that matter, could handle. “I don’t step into the city without seeing and considering a space for this purpose,” says April, of her search for a venue. “Could we block off these streets? Could we . . . ?” she muses.

The former marketing executive for Kraft, Pepsi and Armstrong knew this heightened level of interest meant changes for the once-quaint event. How to maintain that sense of intimacy for 1,200 Lancastrians? Lancaster’s “field of dreams,” Clipper Magazine Stadium, was the answer.

On the infield of the Lancaster Barnstormers’ playground, the 1,200 celebrants carried tables, linens, lavish candelabras, gorgeous floral arrangements, gourmet food and fine wines, and set up, end-to-end, row after row of elegant place settings. By 7 p.m., all were seated and, with a welcome from the stage by April, the tradition of everyone waving their white napkins in the air kicked off the festivities. Musicians “Mama Tried” performed upbeat tunes, the dance floor filled, and toasts were shared among good friends as the summer sky transitioned from watercolor-hued clouds to twilight.

“It was a joy to see the space transformed physically then emotionally as people filled the infield,” April observes, describing the atmosphere as “lots of terrific energy and joyfulness.”

In the weeks leading up to the event, local businesses got caught up in the Fête en Blanc fervor: Commonwealth on Queen wisely offered a “Picnic Pick-Up” to-go menu and Rice & Noodles had a transportable prix fixe dinner. Mio Studio promoted white accessories, and Filling’s mannequins were clad in all-white party-worthy fashions.

Whatever lies ahead, says April, “It has been an amazing experience to see what the power of community can do in a short period of time!” 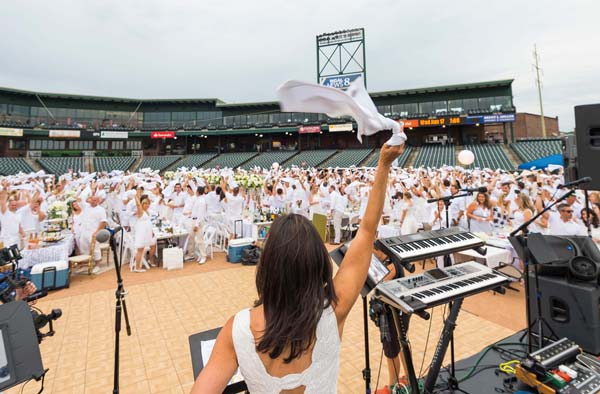 A Fête en Blanc tradition: Participants toast the beginning of the festivities by communally waving their white napkins.