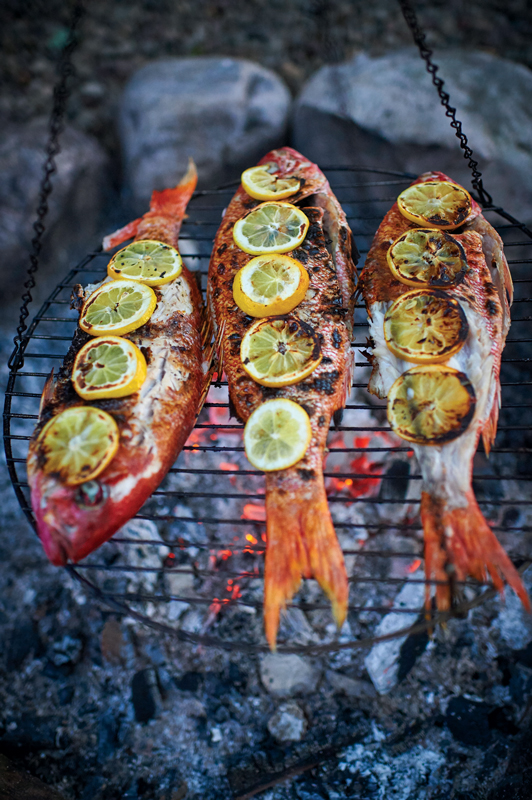 Watching flames lap against sizzling meats or instantly rising dough and getting lost in the aromas of smoke and wood account for a remarkable sensory adventure.

The allure of cooking over fire is both primal and romantic in nature. If you’ve ever seen footage of Argentine Chef Francis Mallmann cook with fire in Patagonia (check out Chef’s Table via Netflix), you probably understand this notion. While Mallmann, who admits to eating a steak at least once a day, oversees nine restaurants worldwide – including Los Fuegos in Miami Beach – his favorite kitchen is the one Mother Nature provided on a desolate island in Patagonia. His award-winning books, Seven Fires and Mallmann on Fire are stunning from a photography perspective (as is his Instagram page). Am I obsessed? Absolutely! And, I just learned through an article in Esquire magazine that for $44,000 me and three compadres could go to Mallmann’s island for a fire-cooking class. Heck, I’d be willing to go there as an unpaid intern!

Thanks to Mallmann, I’ve come to understand that cooking with fire is a wholly transformative process, adding flavor as though it’s a stand-alone ingredient. Fire allows textures to change in ways that cannot be achieved with other cooking methods, as sugars caramelize to add sweetness and smoke infuses savory characteristics courtesy of smoldering hot hardwoods. 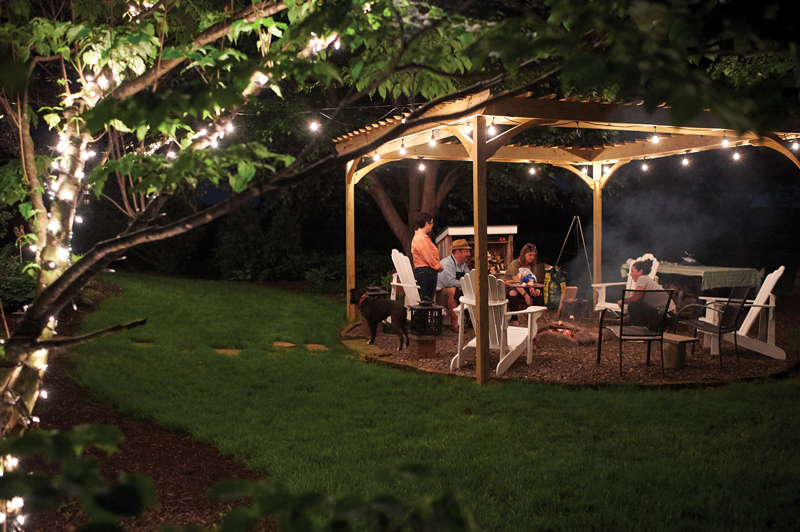 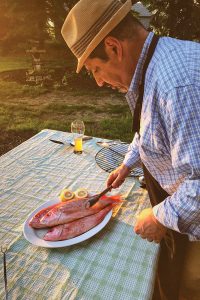 That premise prompted me to collaborate with my former cooking class instructor, Bruce Gingrich, to prepare a multi-course meal over a fire. Since I had been longing for authentic New Orleans-style chargrilled oysters, a typically foreign dish in northern climes, we devised a largely Southern theme for the cookout.

When planning our menu, we debated at length whether we should use a natural gas grill, lump charcoal or open fire. In the end, we resorted to using variants of all three. And, as is apropos, the student learned something from the teacher. On this night, Bruce introduced me to the tripod grill. This exceptional, yet inexpensive, gadget would serve as our primary cooktop over a fire. They can be purchased for less than $30 and are one of the simplest forms of grilling available.

Flames can be useful, but the raw heat emitted from a bed of glowing hot coals is even and controllable. Temperature can be adjusted by moving food closer or farther from the heat; in this case, that meant adjusting the chain to raise or lower the grate. 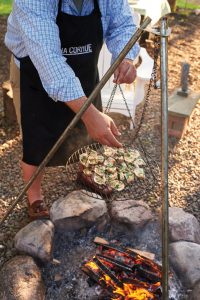 Throughout the entire meal, we didn’t look at a timer once. Conversation, each completed course, and the setting sun were our only indicators of the passage of time. Food was ready when it was finished, and recipes served only as inspiration. Cooking outdoors is completely freeing and equally as entertaining. You have total control of temperature, varied more incrementally and at high levels unobtainable on a stovetop.

Cooking doesn’t have to be an exact science to produce a beautiful and delightful meal. Oysters were by far the most and arguably the only complicated element to this meal, in that shucking requires a bit of elbow grease or a friend willing to do the work while you photograph (thanks, Bruce!).

Shrimp skewers with mango, pineapple, onion and peppers would have been an easy replacement while maintaining a Southern/seafood theme. Grilled pound cake topped with local strawberries (or peaches), fresh cream or milk, and sugar could take dessert to yet another level with ease. 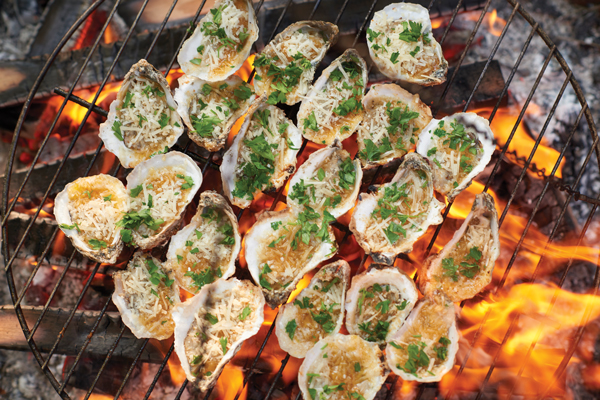 An appetizer course started the meal, signaling that Virginia salts were first on deck, which is also where the oysters were shucked. A regional oyster with an ideal size, fresh Virginia salts are available locally and have a sweet flavor.

If you’re not a raw oyster fan, this “treat” will convince you otherwise. So far, I’m batting 1.000 (one thousand) in converting people, and I have no plans of striking out anytime soon. Here’s how: Topped with parmesan cheese, melted butter, garlic, chopped parsley, Crystal hot sauce, Chili powder and bread crumbs (panko will do), we roasted shucked oysters over a bed of cherry wood charcoal.

Once you’ve devoured the oyster, you can dip grilled Italian bread into the shell to soak up a delicious soup of smoky, savory ingredients.

A pilsner, pale ale or Turkey Hill sweet tea pair well with oysters. Add a dash of hot sauce to Corona or Landshark Lager for an added zing on a hot summer day.

For shucking, a dull oyster knife, wood cutting board and towel are essential for prying open the shell, using careful force at the hinge of the oyster, flat side up. Before opening, be sure to scrub oysters thoroughly with a brush, especially around the edges. Once open, gently rinse any broken shell particles if needed. 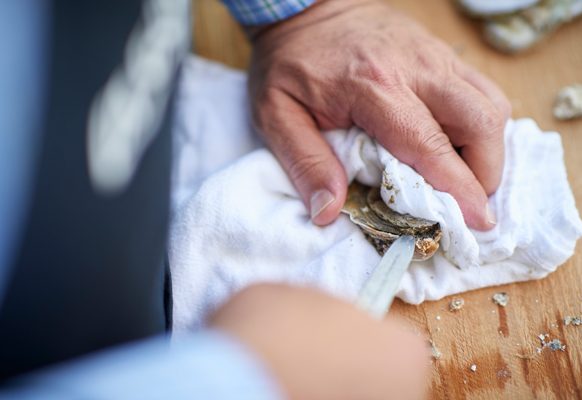 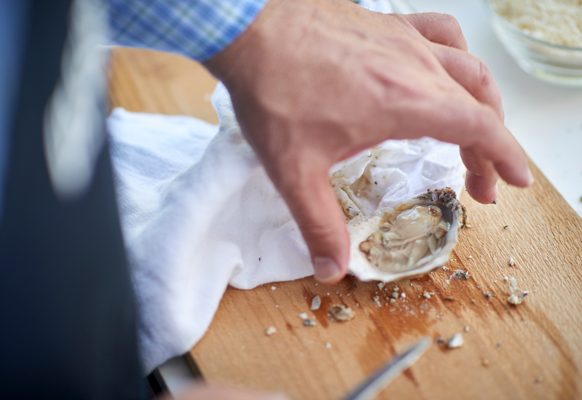 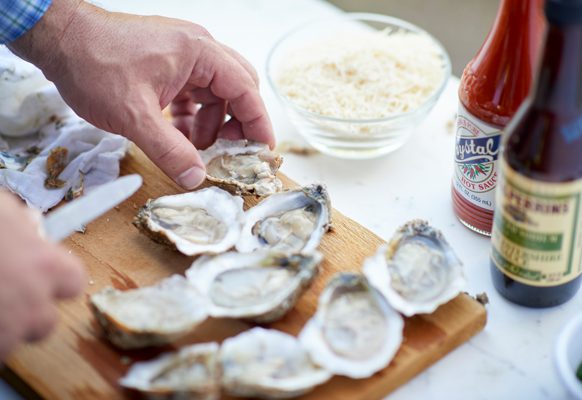 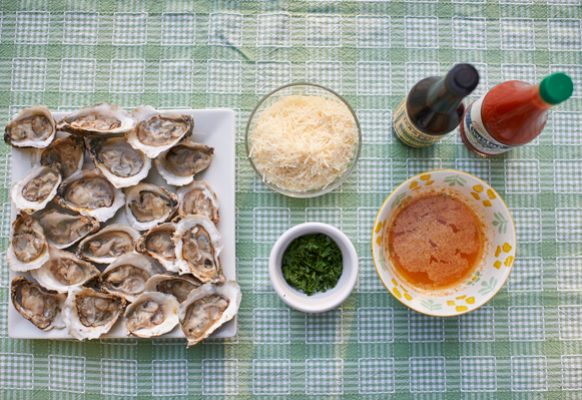 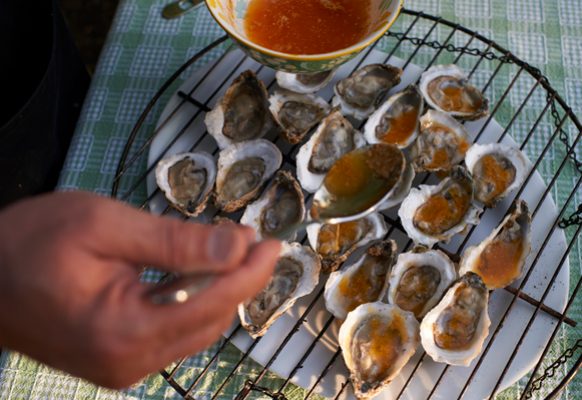 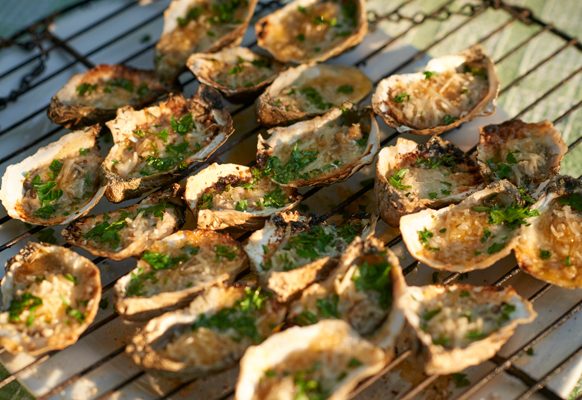 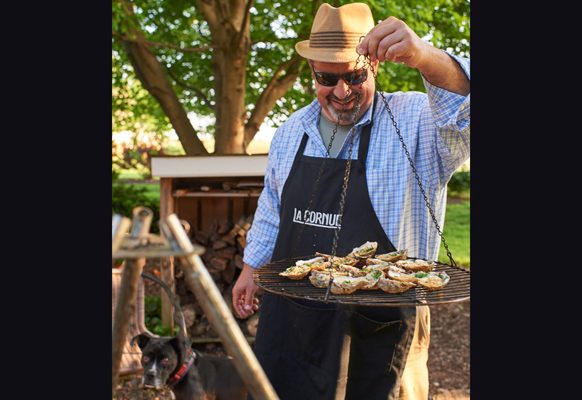 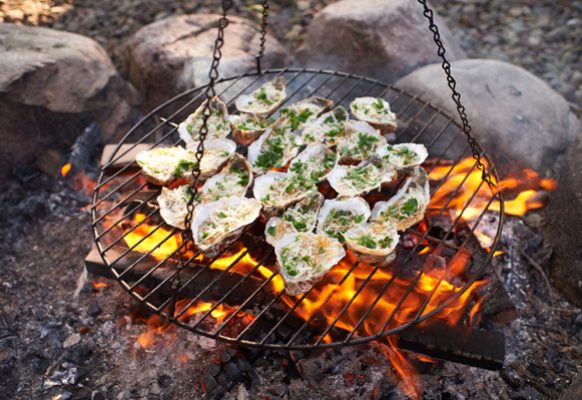 Inside, oysters have two muscles, one on each side of the shell. Served raw on the half shell, both muscles are typically cut. For chargrilling, we only cut the muscle on the flat side to hold the oyster while over the fire.  If you can’t already tell, this was my favorite part of the entire dinner, dessert included. 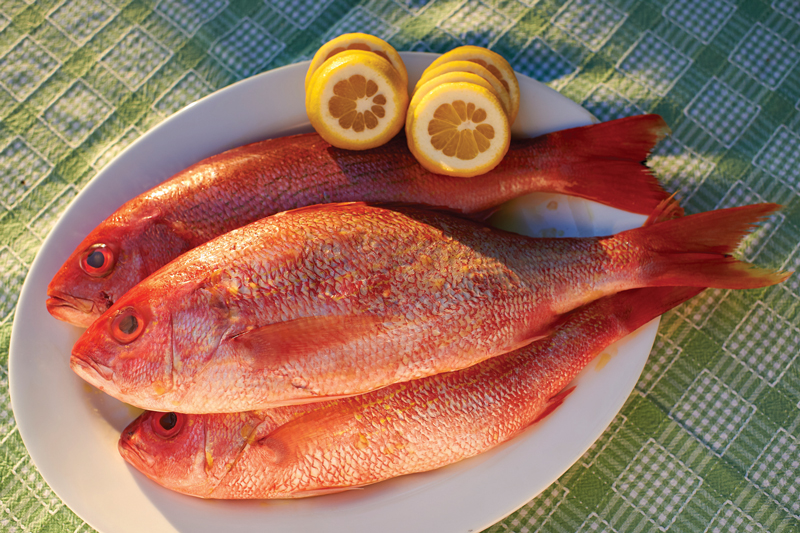 For the main course, three whole red snappers were bought, cleaned and then washed before olive oil was brushed on them. Lemon slices were grilled and then added for a brighter flavor. Being mindful of bones, cooked meat will separate from the skin and scales with little effort.

Using the tripod over the fire, raising and lowering the grate changed the quantity of heat relative to the coals for an even, yet not overdone, cook and a beautiful char. Smashed potatoes grilled atop a cast-iron casserole or griddle were prepared using copious amounts of butter. Local asparagus was grilled simply using olive oil, salt and pepper. 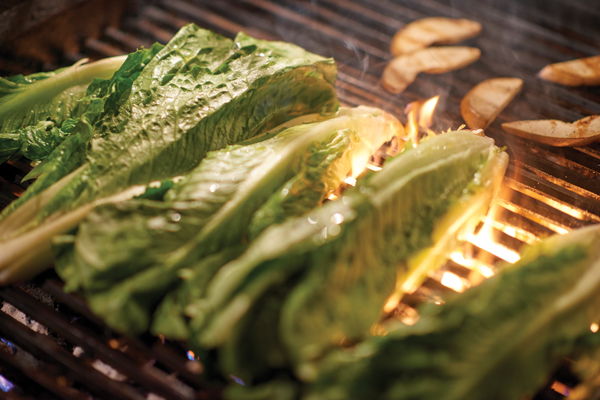 Grilled salad followed the main course, in part for European tradition and due to the fact that we prioritized evening light for photographing the beautiful red snapper.
Romaine lettuce hearts were sliced in half, coated in olive oil and grilled on a searing hot cast-iron grate on a natural gas grill. Bacon was grilled directly on the grates, and a dressing was made with fermented apple cider, vegetable oil, mustard, ground cinnamon and apple cider vinegar. Creamy blue cheese slices balanced the acidity of the dressing perfectly. 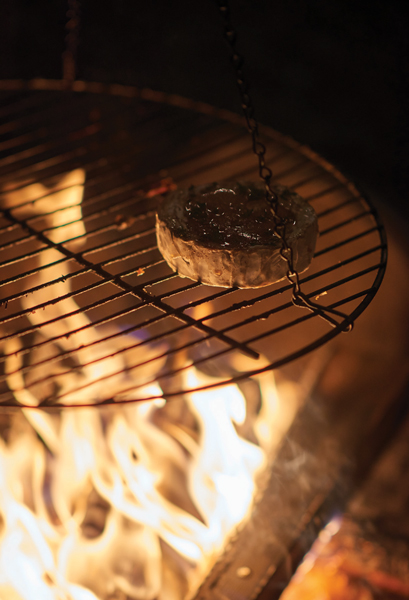 Following the salad, a cheese course was prepared over the fire with hickory and oak lump charcoal. A whole wheel of brie cheese drizzled with maple syrup, a dash of cayenne pepper and cinnamon was set directly on the grate. Sliced open for serving, gooey brie oozed onto the plate with a smoky-sweet flavor perfect for dipping crackers. Wine was the beverage of choice for this course.

For dessert, s’mores got an upgrade. Chocolate-chip cookies replaced graham crackers, and dark chocolate, jumbo-sized marshmallows and peanut butter were added. Peanut butter cups make for another excellent alternative to milk-chocolate bars, eliminating the need for a peanut-butter jar. 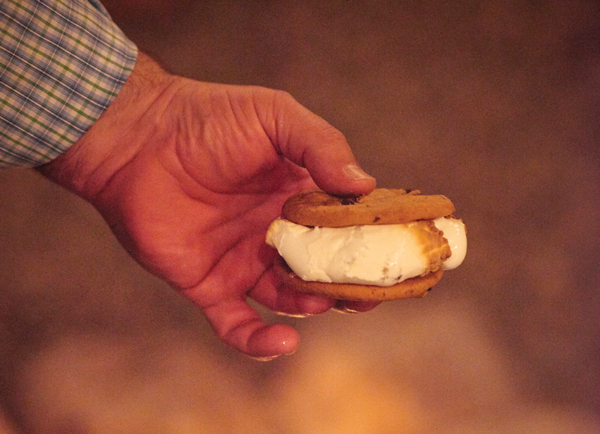