October 2020 Despite the fact that movie theaters were closed for six months, the sale of popcorn in the U.S. is ...Read More

Popcorn: A Worldwide Obsession
October 2020 Fall is a great time to squeeze in one last long weekend at the beach or schedule a week-long ...Read More

A New Green Light: Traveling Through Covid
October 2020 The coronavirus lockdown has provided an opportunity for us to spend more time in our gardens. Weeding is an ...Read More

The Pandemic of the Garden: Annual Invasives
Search The glam meter went off the charts when fashion designer Stevie Boi came to stay in Pete and Carol Heth’s FairView cottage. Part of what attracted Stevie Boi’s team to the Heth farm was the cottage’s well-appointed kitchen.

Carol and Pete Heth routinely welcome travelers from all over the country to their cottage-getaways in rural West Hempfield Township. Their country-farm setting, homemade blueberry scones and fresh eggs (provided by the resident chickens) garner rave reviews. They’ve even been tagged the Chip and Joanna Gaines of Lancaster County for their unique remodeling projects that have converted structures on their 6-1/2-acre farm into themed Airbnbs that include the Mod Pod (mid-century modern), the Birdhouse (French vibe) and FairView (featuring a cook’s kitchen). Their latest project is the Glamper, a restored 1975 Airstream that’s been converted into a quirky, fun guesthouse. Stevie’s interest in cooking began at age 7. Now, he intends to share his Southern roots with his followers. Here, he prepares his signature omelet as the camera rolls.

Meanwhile, in nearby Havre de Grace, Maryland, a young fashion designer named Stevie Boi was searching for a site to launch his latest project, Stevie Boi Eats – a series of cooking videos for his loyal social media followers who already know him as the designer of luxe sunglasses, as well as a world traveler, blogger and edgy style trendsetter. As an online booking service for unique accommodations, it’s the go-to website for those seeking uncommon, back-to-nature destinations like log cabins, cottages, treehouses and camper vans. GlampingHub.com’s Jessica Armstrong found the perfect spot in the Heths’ property: a beautifully decorated cottage that boasts a commercial-grade gas range in a spacious kitchen. “We wanted to find an accommodation listed on glampinghub.com that was more than suitable and also had a lovely story and importantly, a stunning kitchen, as most of his filming would be in the kitchen,” recalls Jessica. “I found Carol’s property on our site, shared it with his team, and we thought it would make such a great fit.”

The fit was superb. We joined Stevie Boi while he was taking a break between tapings, lounging on the hanging bed in FairView cottage’s screened porch and sipping wine on a glorious late-summer-in-Lancaster-County afternoon. The designer of glammed-up, luxury sunglasses was far away from his cosmopolitan life of New York Fashion Week premieres (his next destination) and whirlwind multi-city international tours. The youngest son of military-career parents, Stevie Boi (aka Steven Cordell Strawder) was born in Augusta, Georgia, but gained the worldly influence of European culture through his family’s travels and posts in Italy and Germany. Stevie Boi relaxes on the cottage’s floating bed, surrounded by trees and farmland.

He left his government job as a military contract specialist when his need to create, design and express himself called to him. Fame came somewhat by accident, when he designed his own protective eyewear with some fabric and glue, posted the results to his website, and received thousands of requests from interested buyers. The DIY project inspired the beginning of SBShades, a now-extensive collection of glitzy, futuristic sunglasses that will cost you $300 to $500 to indulge your inner fashionista. Clients include a who’s-who from the worlds of fashion and entertainment. His breakthrough came in 2012 when his eyewear appeared on the cover of Vogue. Now 30, the social media-savvy Stevie Boi has expanded his influence, having published a memoir about his nascent fashion-designer career, Shade Built My Empire. He recounts how “$20, determination, hard work and fearlessness” made Stevie Boi a brand name among luxury accessories, including how he hit the occasional pothole along his personal road to success. He intends that his story of successes and overcoming obstacles “empowers the trendy professional to pursue their entrepreneurial dreams with a dash of fierceness.” Having scored the cover of Vogue with his edgy, unisex sunglasses in 2012, Stevie Boi’s designs have shaded some of the world’s most famous eyes, including those of Beyonce, Jay-Z, Madonna, Britney Spears, Lady Gaga, Rihanna and Katy Perry. Check out the selection online at stevieboi.com.

His time in Lancaster County added to a new chapter in the Stevie Boi empire – online cooking videos. He is also working on a cookbook, Season to Taste. He is not a neophyte to cooking – he’s been an avid cook since he was 7. In the summer of 2018, he collaborated with Philly-based Little Baby’s Ice Cream to create the specialty flavor, PINK. With a mother of African descent, Stevie intends to share a unique cultural cuisine from his roots of Gullah Geechee, a lineage that connects to some of the first Africans who arrived in the Southeastern U.S. through the slave trade. A unique culture emerged that today is reflected in the Gullah Geechee’s art, crafts (the famous sweetgrass baskets), music, food and Creole-style language. Congress recognized the significance of Gullah Geechee culture and established the Gullah Geechee Cultural Heritage Corridor, which extends from Pender County, North Carolina, south to St. Johns County, Florida. Gullah Geechee cuisine is especially influential in the Charleston area and South Carolina’s Lowcountry. “I want to show people my roots,” said Stevie Boi, as he donned an apron for the next taping of his cooking video series, explaining that the Lowcountry cuisine “includes food like red rice with tomato sauce and white wine, and chicken breasts with bell peppers and jalapeno.” Creole and Cajun influences may come to mind, but Gullah Geechee’s hearty main dishes are a separate savory cuisine that often includes rice, local seafood, okra, tomatoes, braised vegetables and stewed greens. As Stevie prepared to demonstrate the making of his special omelet, he revealed his “secret ingredient” – adobo seasoning. “I have a Southern approach to everything I make,” he shared, “from collard greens to schnitzel, mac-and-cheese to pepper relish.” His grocery run to the local Musser’s Market was a highlight of his visit, exclaiming, “They were so nice!” The local chicks were fascinated by Stevie Boi’s style.

The Heths’ fancy-feathered chickens, burros and resident emu, Ferrari, kept Stevie Boi entertained and on-guard as they curiously checked out their new guest from the pasture next to the cottage’s front yard. It was just another day in Lancaster County, and a healthy dose of nature for the tres chic Stevie Boi. 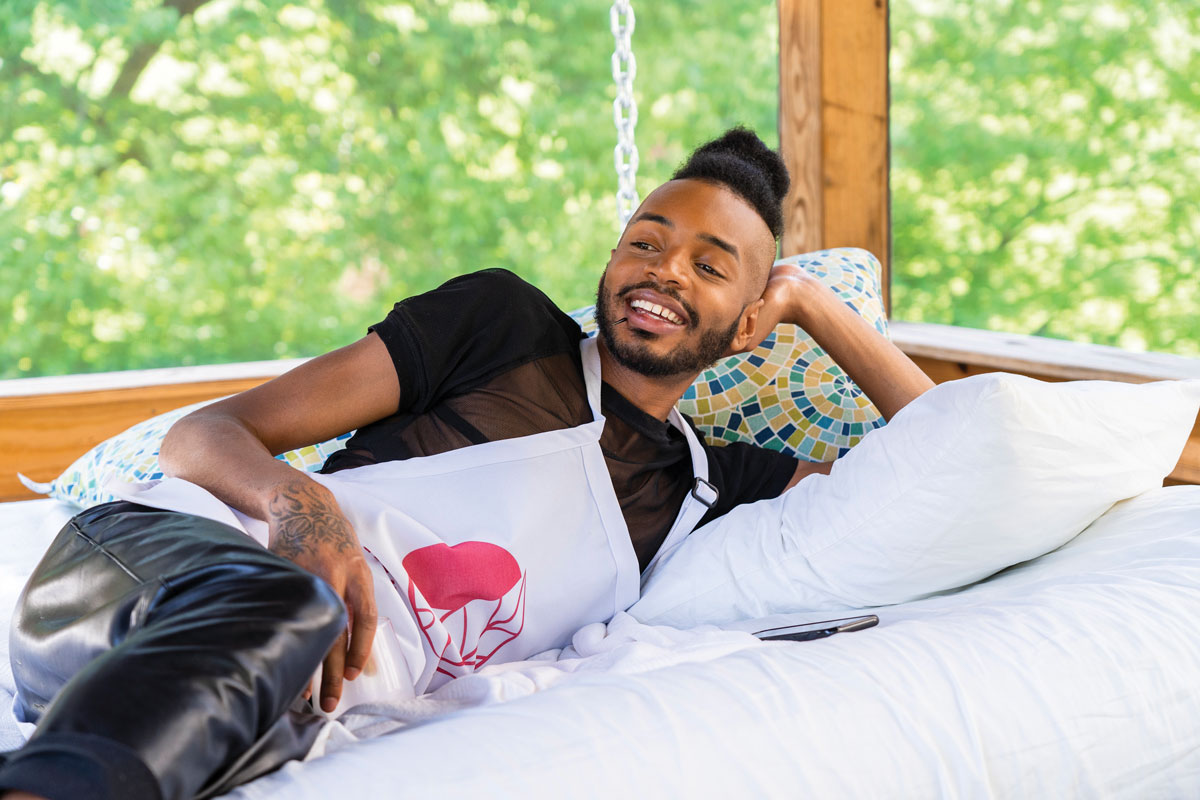