Tucked away in a valley along Route 72 just south of Manheim, The Caddy Shack offers old-fashioned family fun. The restaurant and mini-golf course, established in Kauffman Park in 1989, were purchased by Mark and Ronda Morrison in 2014.

Ronda or Mark can usually be found onsite, often with their daughter, Olivia. “We have a great family atmosphere. Being in Kauffman Park is pretty interesting. Some of the locals remember the park; they’ll come in and point out the location of a big slide or other features. But, we still have the merry-go-round in the same location that it’s been in for years,” Ronda says.

The seasonal restaurant seats 120 – 60 indoors and 60 on a spacious deck. The indoor area is defined by a kitchen, a counter where guests place orders for food and ice cream, and a dining area. Patio doors on three sides of the building slide back to admit cooling breezes. Even on a rainy day, it’s a bright space. Wood floors, wainscoting and a vaulted wood ceiling (with ceiling fans) create an airy feel.

The décor includes Tiffany-style ceiling lights, vintage photos of Manheim and golf memorabilia. Casual tables are topped with tablecloths that carry on the golf theme.

Ronda points out that a lot of people erroneously think of The Caddy Shack as being solely for mini-golf and ice cream. “Many people don’t know that we’re a family diner,” she says.
She describes the menu as American fare. It features burgers, beef brisket, sandwiches (including grilled paninis and cheesesteaks), hand-cut fries and salads. There’s also a daily soup. Broasted chicken (available as a dinner or by the bucket) is also popular with visitors. In addition to fries, sides include broasted potatoes, cheese sticks, corn nuggets, onion rings, applesauce and coleslaw.

A home-style meal is available every Sunday. Ronda says the Sunday meal varies weekly and has included such Lancaster County favorites as pig stomach, ham loaf, and chicken & waffles. “We have a group of people who come in after church on Sunday for the home-style meals,” she notes.

Ice cream is sourced from a dairy about two hours away. The hand-dipped ice cream can be served in a cone or dish (with or without toppings), as a sundae or a deluxe sundae (think Dusty Lane or banana split). Ice cream offerings also include shakes, malts and floats (who can resist a root beer or birch beer float on a hot summer day?).

The fun at The Caddy Shack also includes the 20-hole mini-golf course. Mark and Ronda refurbished all of the greens two years ago. The course also includes a spring that feeds a small pond and a water feature. A gazebo-like structure marks the location of the spring. “It’s part of the charm of the course,” Ronda says.

The course takes about 90 minutes to play, and Ronda says customers often combine dining with a round of mini-golf. A number of nonprofits and civic organizations have hosted mini-golf tournaments as fundraisers. Additionally, companies have used mini-golf as a team-building opportunity or as part of an employee picnic. The Caddy Shack also offers birthday party packages that include mini-golf.

The Caddy Shack restaurant and mini-golf is a seasonal operation. It opened in April and will close Sunday, September 10 (the Sunday after Labor Day). However, mini-golf tournaments can be booked for the off-season. For mini-golf tournaments, especially those held off-season, Ronda stresses that arrangements must be made ahead of time. 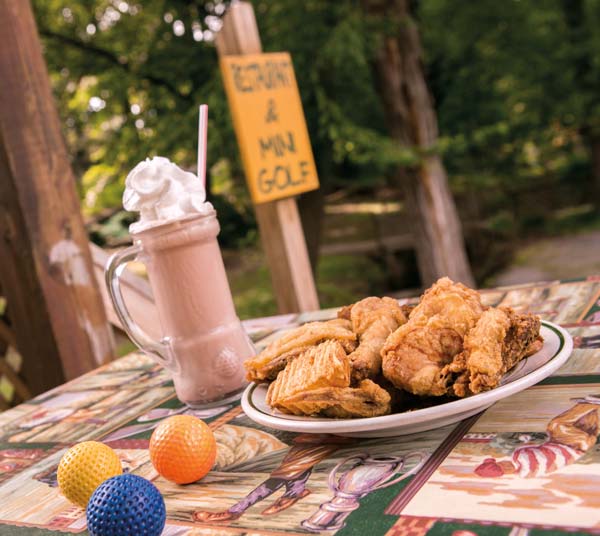