What do you get when you combine the rustic simplicity of Italian cooking, the top-notch hospitality of Napa Valley and a love of fresh, vibrant and locally sourced ingredients? You get Luca, a new restaurant in Lancaster that’s as homey and welcoming as it is chic.

Luca’s proprietors, Taylor and Leeann Mason, also own and operate Ma(i)son, a boutique restaurant along North Prince Street that opened in July 2011 and quickly became a sought-after special occasion spot. Luca, on the other hand, aspires to be a true neighborhood restaurant that can be as casual or as celebratory as each individual guest would like.

The two share a common thread: Taylor Mason’s passion for simple, fresh ingredients that are treated as simply as possible.

Taylor and Leeann met as students at Mount St. Mary’s College in Maryland. After graduating with business degrees (she in 2006 and he in 2007), they decided to head west. Taylor applied to the Culinary Institute of America in St. Helena, California, the heart of Napa Valley. As they got to know the area, they were not only impressed by the level of excellence and professionalism in the hospitality industry, but also the extent to which the land and nature were revered. “Everyone bowed down to understanding that Mother Nature dictated everything, and we were just harvesting a little bit of her beauty,” he remembers. “There’s huge respect for earth, seasons and agriculture in general.” As they were working in the wineries, they would meet people from the East Coast who marveled at the vibrancy and freshness of Napa Valley food.

Taylor credits that sentiment to a hallmark of California cuisine: Restaurants serve food that is harvested locally and in season. He doesn’t just mean the traditional four seasons. Taking a cue from California, Taylor works to develop cuisine that reflects specific points – what month or even what week – of the growing season.

And, that’s ultimately what drew the Masons to Lancaster.

Leeann grew up in Downingtown, Taylor in the D.C. suburb of Silver Spring, Maryland. Leeann’s mom’s side of the family resides in Millersville. After five years on the West Coast, the Masons decided to move back to the East Coast to be closer to family. But, before settling in, they wanted to travel through Europe to experience the food, wine and culture. They planned to come home to Downingtown for several months, enjoy the birth of their niece, and then hit the road for Europe.

Two days after arriving in Pennsylvania, Leeann got a call from a family friend who told her about a restaurant in Lancaster that had just closed and was on the market. Leeann’s love of real estate got them through the door, and despite Taylor’s skepticism, he says they walked into the space at 230 North Prince Street, felt at home and became restaurant owners. They named it

Ma(i)son, a play on their last name plus the French word for “home,” and took up residence in the upstairs apartment.

Taylor, who was inspired by Lancaster County agriculture, was excited to create a true farm-to-table restaurant built on family-like relationships with local farmers and respect of the ingredients they provide.

One of Taylor’s most impactful mentors, David Kinch of Manresa in Los Gatos, California, taught him that getting more involved and closer to the ingredients you cook with will ultimately elevate the cuisine you create. Thus, Taylor aspires to use all available parts of a plant – not just the pea pod for example, but the pea shoot and pea flower as well – “There are so many interesting and edible parts to a plant besides just the fruit it’s grown for,” he observes.

“We want to create a mind-blowing but very simple flavor experience [at both restaurants] based on the fact that people worked hard to grow great products,” Taylor says. “Then we want to put it on the plate in an unadulterated simple state.

“There are days that the veggies we’re using come straight from the farm and don’t touch refrigeration. That’s when I know I’ve done my job well.”

What’s In a Name

The Masons chose the name Luca for their newest venture in part as homage to a distant relative of Leeann’s who was an Italian shoemaker, and also because Taylor loves the name (if they had a son, he would be named Luca – the couple has two daughters).

Luca’s menu, which features rustic Italian-inspired dishes, will change often. As a “curator” of his menu, Taylor wants to create simple dishes that aren’t necessarily what you will find at other Italian restaurants.

“To me, food is a thoughtful curation of what reflects a time and place,” he explains. “We want to deliver a beautiful storybook experience of traveling through Italy with a menu that will evolve throughout the year with what’s available at that time.” Taylor refers to this as “food anthropology,” or where history, culture and tradition intersect.

In practice, that means offering lighter food in the summer and heartier, richer food in the winter. Taylor admits to enjoying the challenge of cooking in the fall and winter with local ingredients: “You paint with fewer colors, but darker richer colors,” he says.

A wood-burning hearth and handmade Italian wood-burning oven serve as the focal points of the restaurant’s design and help create dynamic, complex flavors for fish, veggies and pizzas.

As curated as Luca’s menu is, the Masons also took exacting care in creating a beverage program to enhance the culinary experience and advance wine culture in Lancaster. After tasting hundreds of wines, they created guiding principles to assist in making their selections.

First, the wine had to complement the cuisine. Which meant not just offering wines they knew would sell – oaky chardonnays or heavy cabernets – but listing wines that may be a bit unfamiliar and would elevate the food through characteristics like lower alcohol content, lighter body or higher acidity. Secondly, they wanted to create a spectrum of geographic wines that uniquely expresses where they’re from, which is why the wine list features selections from Sicily, Tuscany, Umbria and Piedmont, to name a few.

But what’s great food and drink without a great space? The James Street location was built in the 1940s as a grocery store and was then used as a dry-goods wholesale warehouse from the 1950s until the Masons acquired it in 2014. “I find that to be the most poignant thing about this project,” Taylor says. “We are bringing food back to a building that was built for food.”

The restaurant space features a bar that is perfect for walk-in guests, a mezzanine available for general seating and private events, a chef’s table right in front of the open kitchen and a large front dining area that overlooks a patio. When weather permits, it’s the Masons’ plan to raise a large (glass) garage door at the front of the building to create the feel of an open-air Italian café.

“We want Luca to be an Italian lifestyle,” Taylor explains. “Not just Italian food.” 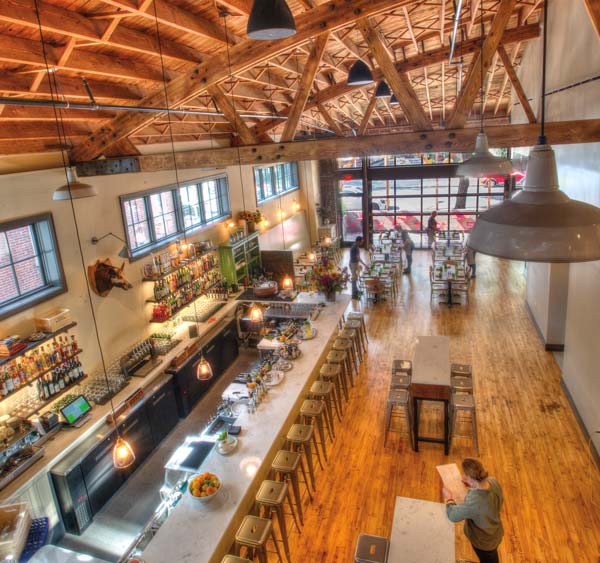 What was once a grocery store and then a warehouse is now an open, airy and light-filled restaurant.