The motto of Max’s Eatery is “everyday eating.” It lives up to that promise, offering “adventurous food” at affordable prices with a dash of fun and “beloved memories” thrown in for good measure. Located in downtown Lancaster’s market/theatre district, Max’s held its grand opening in September. 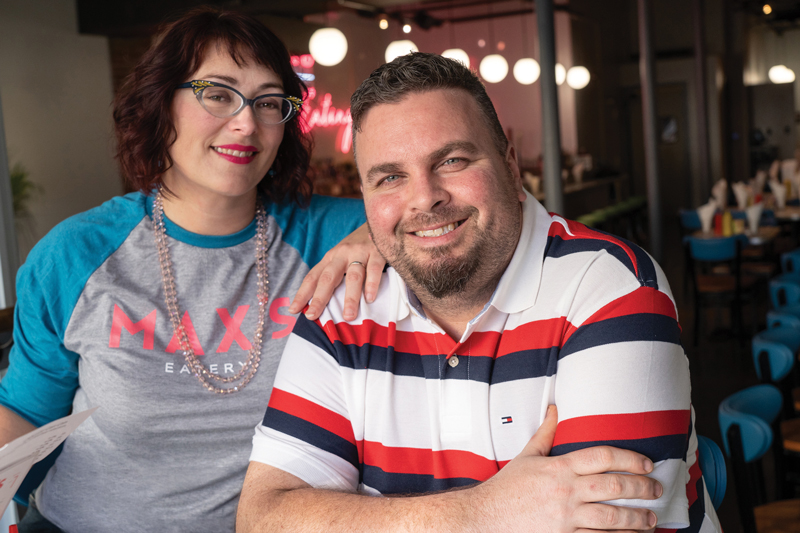 Megan Lefever Titter manages the front of the house, while Chef Matt Titter oversees the kitchen.

The restaurant is a collaboration between partners Douglas Bernard, Connor Harris and Chef Matt Titter. Megan Lefever Titter, who is a certified sommelier, serves as front-of-the-house manager. Named after Matt and Megan’s 9-year-old son, Max, the eatery fills a niche in the downtown restaurant scene.

“Matt and I moved from Lancaster to Arizona a few years ago. I was a teacher, and he went into the restaurant business,” Megan explains of their journey. Megan had worked in restaurants during high school and college. “While I liked being a teacher, I missed being in restaurants, so I worked part time in a restaurant,” she continues. “We would talk about opening our own place. When we moved back to Lancaster, the conversation continued. We wanted a central location, but we also looked at what was missing from the restaurant scene and decided to fill that niche.” 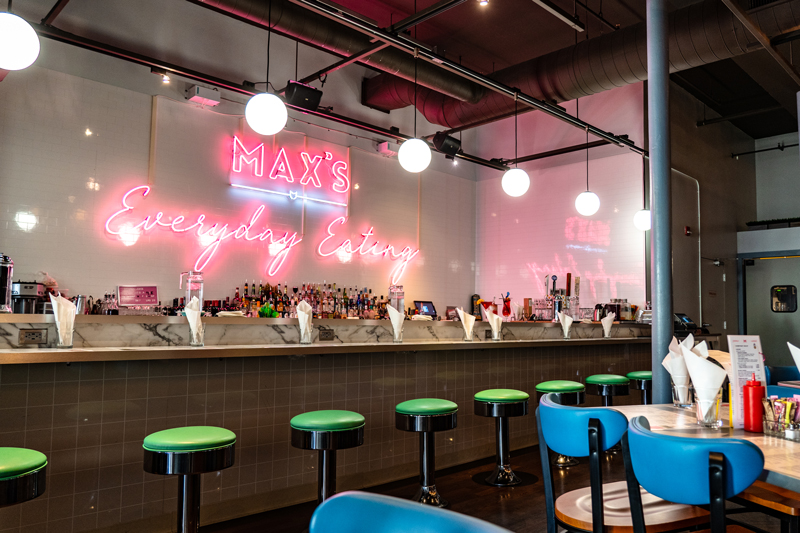 The interior, which is characterized by exposed brick and high ceilings, offers seating for about 115, including tables in the two storefront windows that flank the doorway. A counter features seating on soda fountain-style barstools. The restaurant’s name and motto are emblazoned in neon pink behind the counter/bar. Matt says the counter styling was inspired by sushi counters, which traditionally have two tiers. “We deliberately designed the counter to be two-tiered rather than a flat bar top,” Matt notes.

“You’re just as likely to be seated beside a child enjoying a milkshake from the JV menu as you are someone enjoying a meal and an adult beverage,” Megan points out. “And, counters seem to encourage conversation among people. We love that people are making memories here as they snap photos with the counter and sign in the background.” 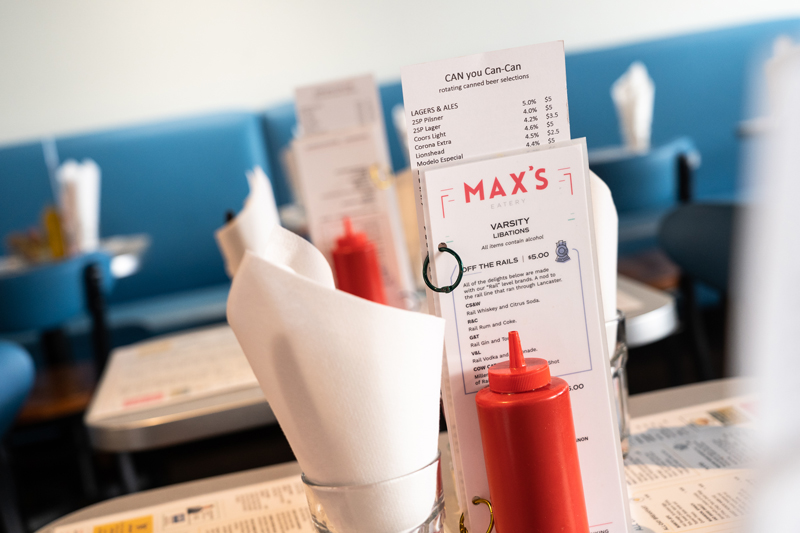 Also, by design, there are no TVs. “We want to encourage couples, families and friends to interact with one another rather than focusing on a TV,” she stresses.

“Our whole concept is a nod to the heritage and history of a community
‘go-to’ spot,” Matt adds. 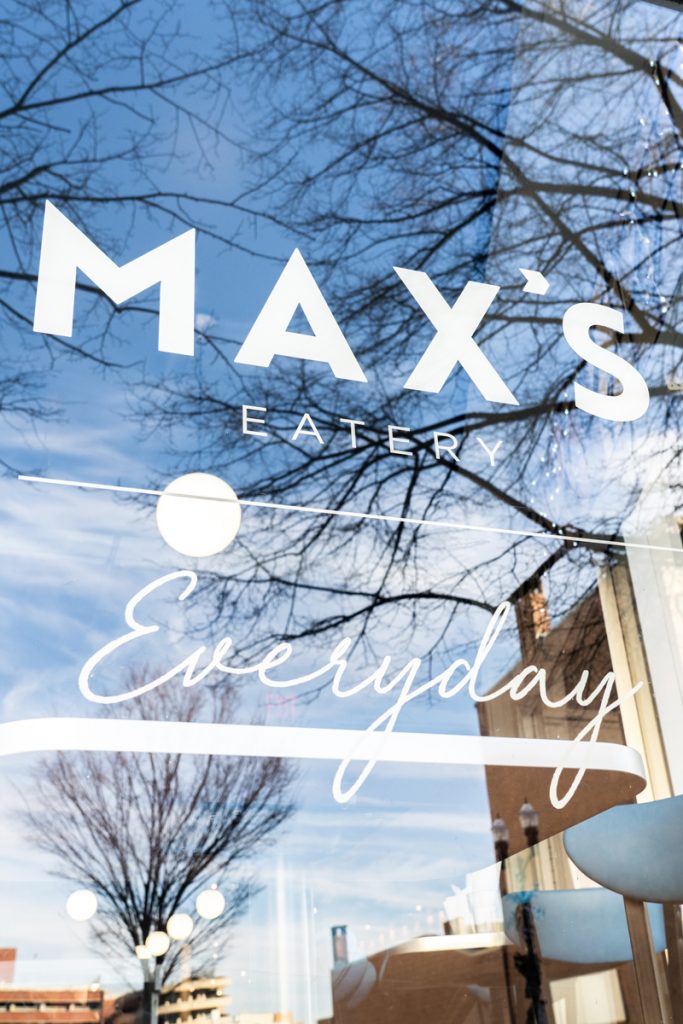 Max’s offers an “all-day” menu. “Breakfast meetings are popular downtown, so we offer breakfast items. But we’re also an everyday eatery, so we want someone coming home from third shift to be able to order breakfast, a sandwich or an entrée,” Megan says. 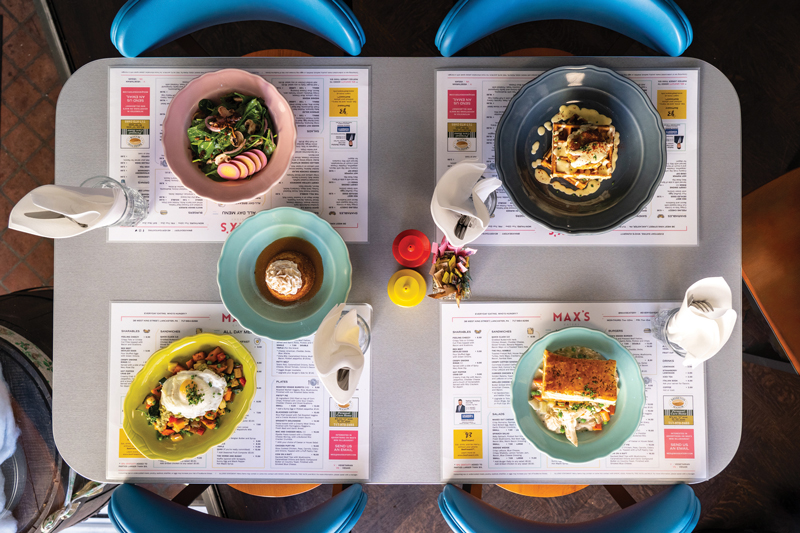 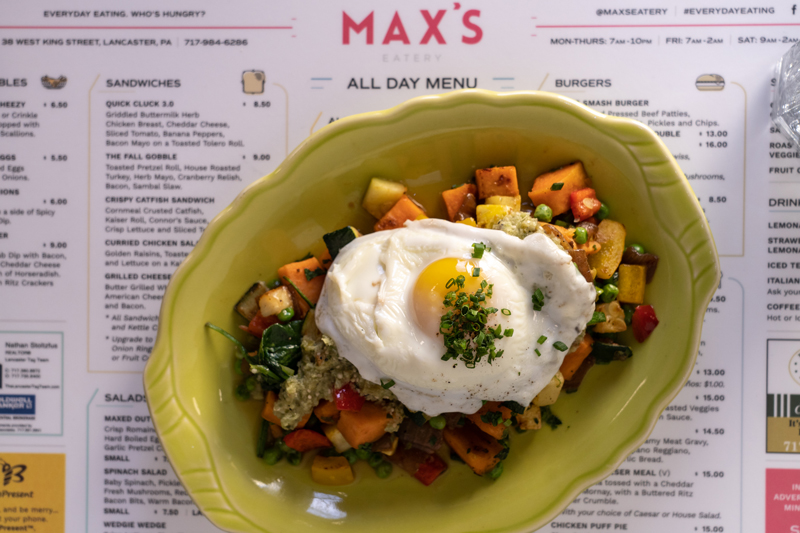 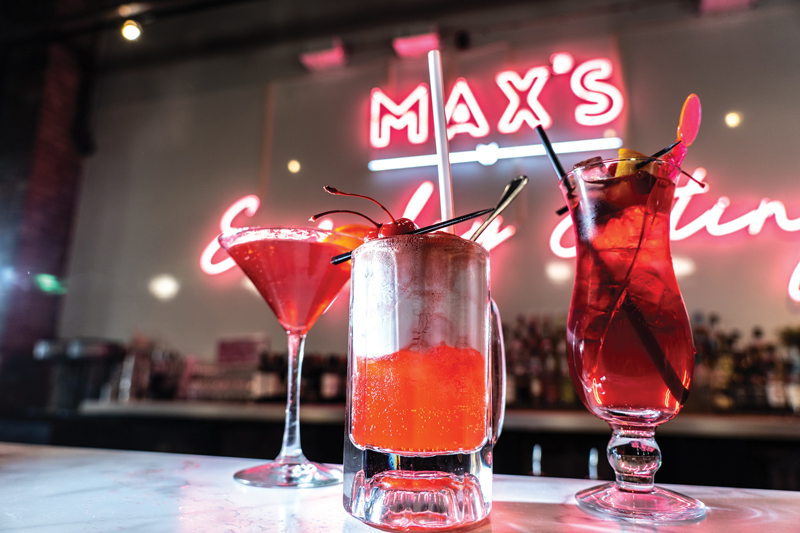 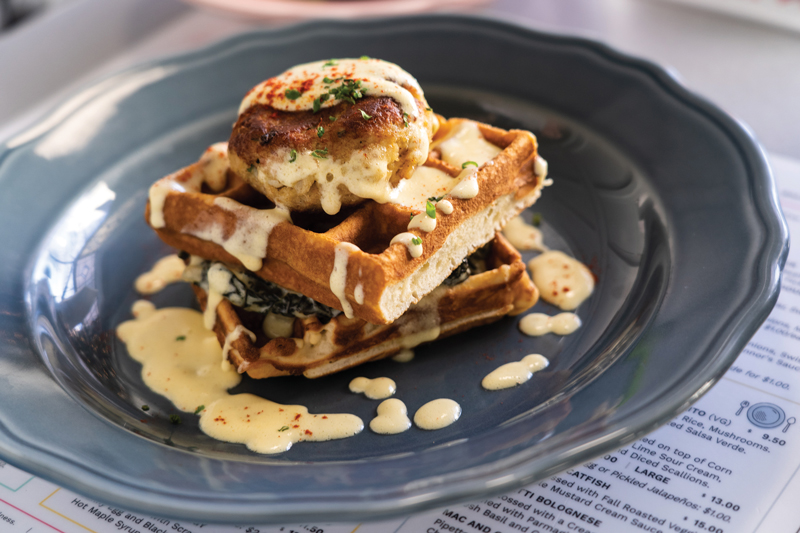 Staff engagement is part of the fun – in fact, Max himself can sometimes be found at the restaurant after school or during school vacations. If it’s a guest’s birthday, they not only receive a special treat (a waffle with whipped cream and a candle), but also a serenade from the staff. “We really love birthdays,” Megan says with a smile.
Max’s also hosts a monthly Sunday Supper that’s theme-based. According to Megan, the themes vary and have included the Great Maxby – a nod to the flapper and speakeasy era – where staff and many of the guests dressed in period costumes. 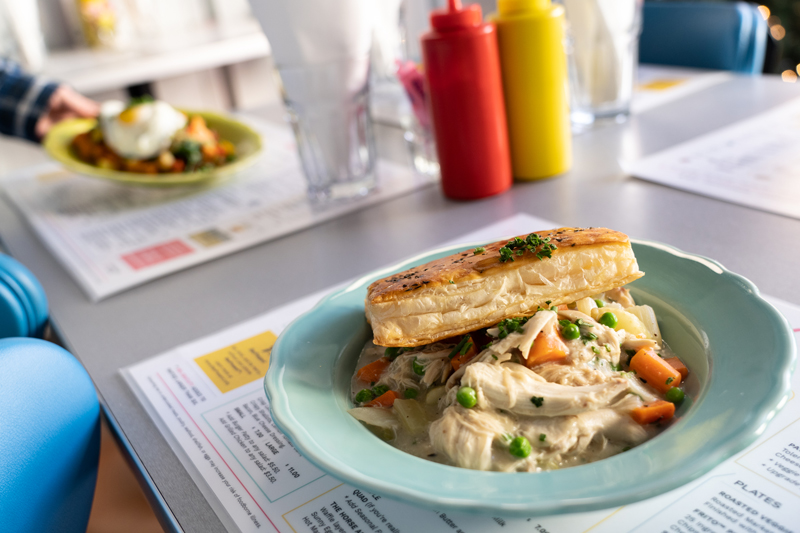 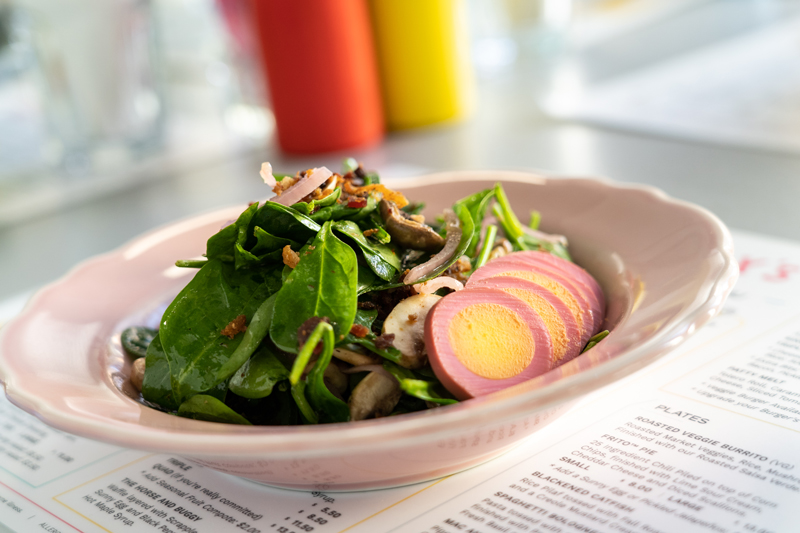 For the upcoming Galentine’s Day (February 13), Max’s will have a special float as well as a few other features. “It will be a fun time,” Megan says.

What is Galentine's Day?
What is Galentine’s Day? The comedy series Parks and Recreation receives credit for this pop culture-inspired holiday. In the February 11, 2010, episode of the NBC series, Amy Pohler’s character, Leslie Knope, referenced her annual Galentine’s Day party, explaining to castmates and the audience that “every February 13, my lady friends and I leave our husbands and boyfriends at home, and we just go out and kick it, breakfast style.” The episode inspired Galentine’s Day celebrations nationwide. Breakfast has since expanded to include brunch, lunch and dinner. Parties are held in which women celebrate their friendships. As a result, on February 13, many waffles (the official food of Galentine’s Day) are eaten, mimosas imbibed and gifts exchanged. Restaurants, florists, spas and salons, greeting card companies and retailers have jumped on the bandwagon. 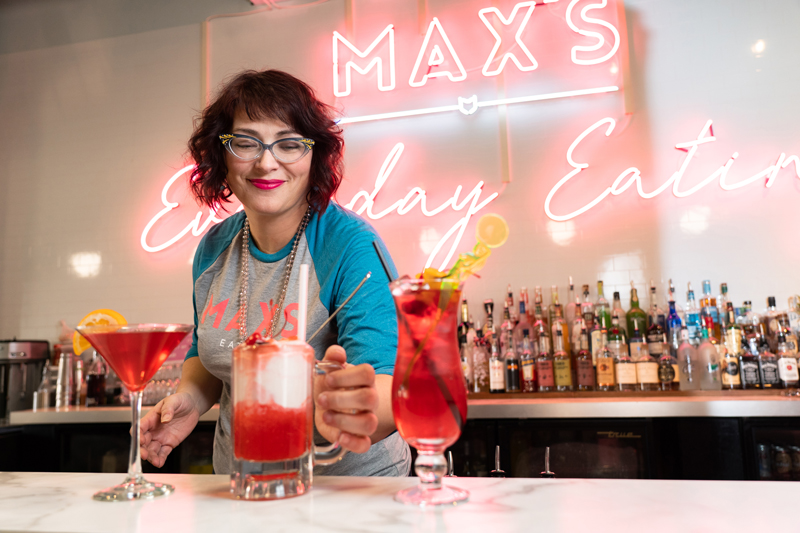