Lancaster’s favorite new restaurant will celebrate its one-year anniversary this month. Located next to the Science Factory in Lancaster, Frisco’s menu focuses on the distinctive food of Peru, which is where the restaurant’s founder and namesake, Francisco “Frisco” Gomez de la Torre, was born. 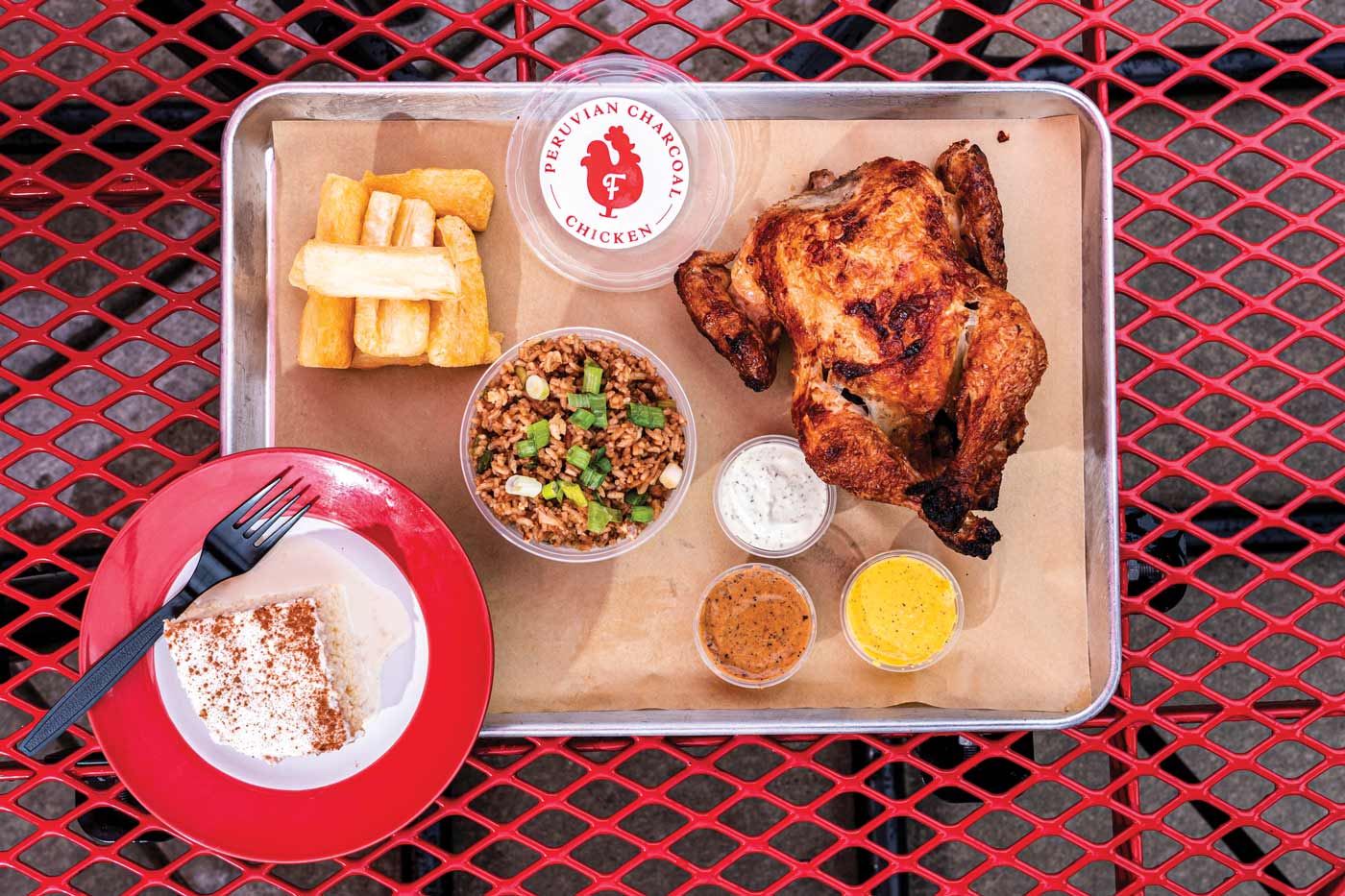 Locally sourced chicken is brined in Peruvian spices and slow-cooked over charcoal. Here, it’s accompanied by a trio of sauces whose heat index ranges from mild to hot, Peruvian fried rice and tres leches cake.

The walls of the restaurant provide a history lesson of sorts, as they are decorated with large posters that trace Frisco’s journey from his native Peru to becoming a restaurant owner in Lancaster County. Born and raised in Arequipa, Peru, he immigrated to the United States in 2003, arriving in Miami with $300 in his pocket, two suitcases and a big dream. Sadly, he had to leave his wife and one-year-old daughter behind. “My dream was to be able to work and soon send for my family,” Frisco explains.

His first job in the hospitality industry was as a banquet server at a hotel in Lexington, Kentucky. “I discovered my passion for serving there,” he explains. “I moved around and moved up, and with hard work and endless hours invested, I was eventually promoted to a management position. My wife and daughter came to the U.S. in 2010, and two years later, our second daughter was born.” 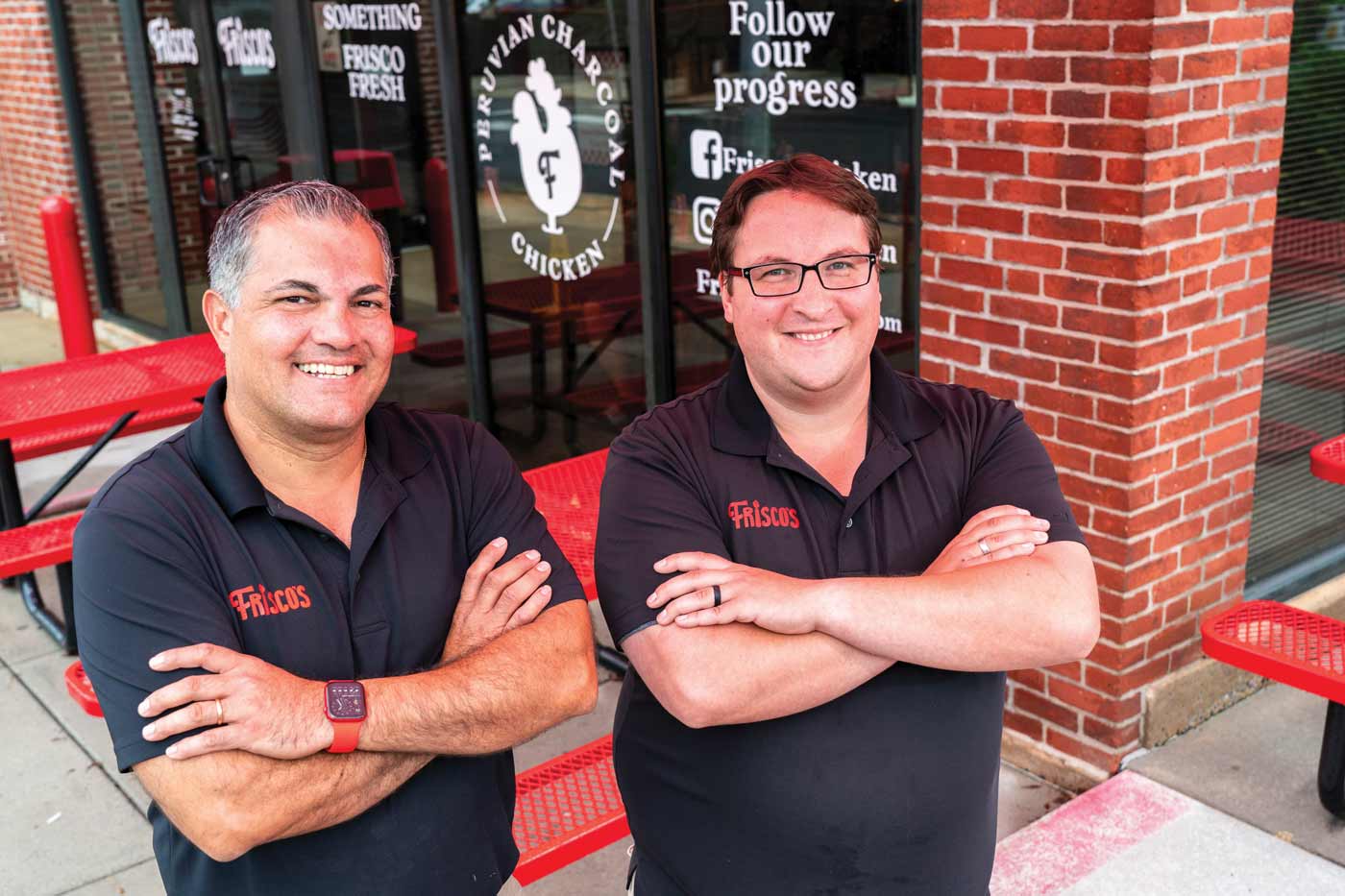 Along the way, a new dream of opening a Peruvian-style rotisserie chicken restaurant manifested itself. When he was laid-off from a position with a Lancaster restaurant due to the COVID-19 pandemic, Frisco says he knew the time had come to make his dream a reality. “I knew this food is ideal for take-out,” he points out. “In my country, there’s a rotisserie chicken restaurant every few blocks in the cities. People do take it home to eat.”

What differentiates Peruvian chicken from most rotisserie chicken is the way it’s prepared and cooked. At Frisco’s, the chicken, which is locally sourced, is brined in authentic Peruvian spices and then is slow-cooked in a special charcoal-heated oven that was sourced from Peru. The end result, according to Frisco, is “very flavorful chicken.” 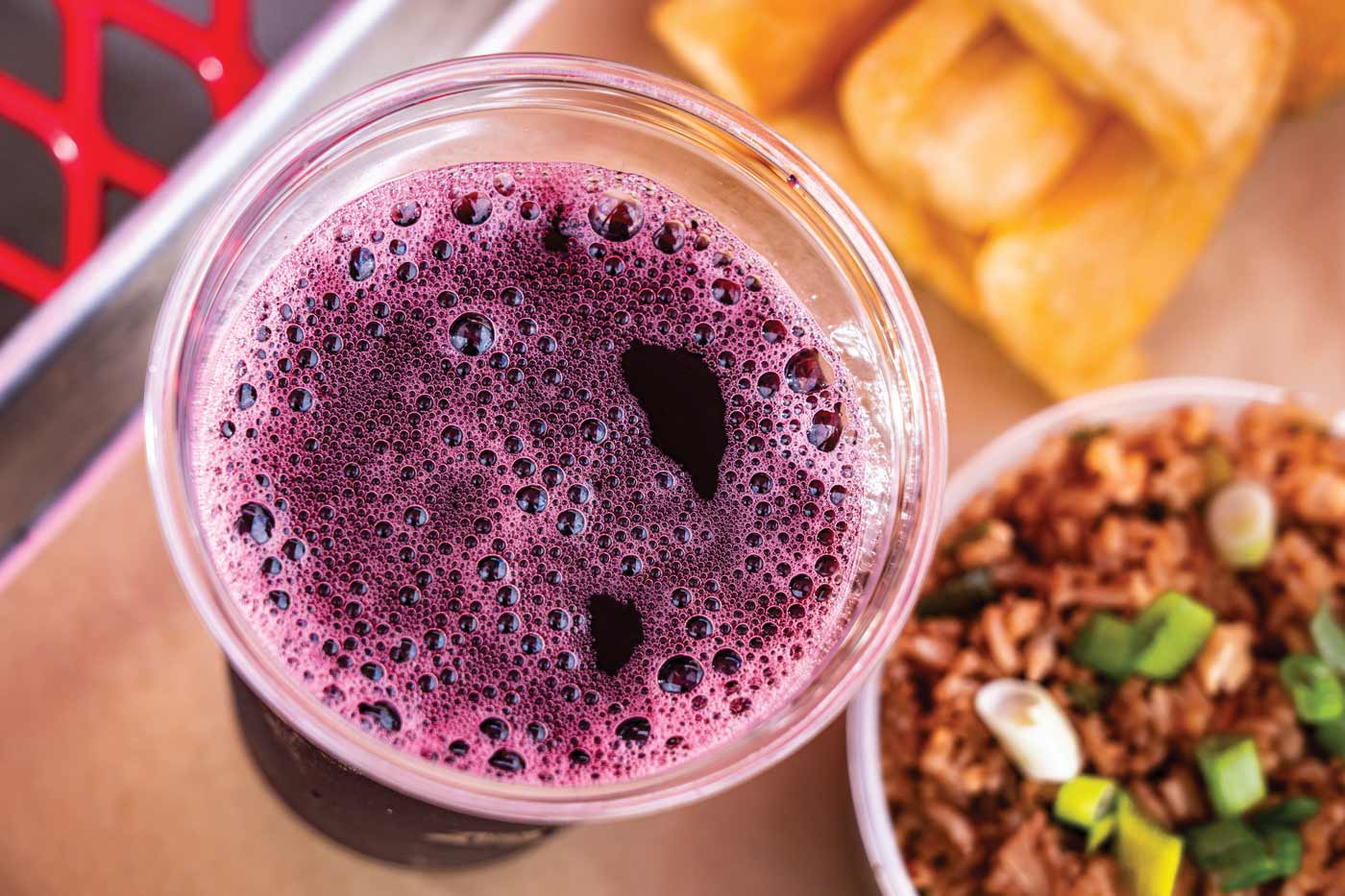 Chicha morada is a Peruvian drink made from purple corn, pineapple, green apples, cinnamon and cloves.

On November 1, 2020, Frisco’s Chicken made its debut just six weeks before a statewide shutdown was ordered prohibiting indoor dining. For most restaurants, the shutdown over the holidays couldn’t have come at a worse time. In the case of Frisco’s, the promise of flavorful food geared to take-out helped to make it an instant success. “We’re primarily a take-out restaurant,” says Josh Rinier, Frisco’s business partner. “You could say we’re the alternative to pizza.”

A bright and sunny ambience – thanks to large windows in the front of the space – welcomes those who choose to dine in at Frisco’s Chicken. The layout features a display kitchen, with seating available at tables and booths (38 inside and 32 on a sidewalk patio). Customers place their order at a counter and then pick it up when it’s ready.

Take-out has been an integral part of the restaurant since opening last November.

As for take-out, there’s a pick-up window along the side of the building. “We have some parking along the side in the back. When we were shut down for dine-in over the holidays [mid-December 2020 to mid-January 2021], we added numbers to those parking spaces for curbside delivery. We also offer delivery via DoorDash,” Josh explains.

The menu features a half or whole chicken with two or three sauces, which are house-made using Peruvian spices. The cilantro aioli sauce is the mild choice. The other two sauces offer some “heat.” Made with spicy Peruvian yellow peppers and huacatay leaves (taste-wise they’re described as a mix of sweet basil, tarragon, mint and lime), aji is considered to be a medium-hot sauce. Rocoto, made with spicy Peruvian red peppers and huacatay leaves, qualifies as the hot sauce. 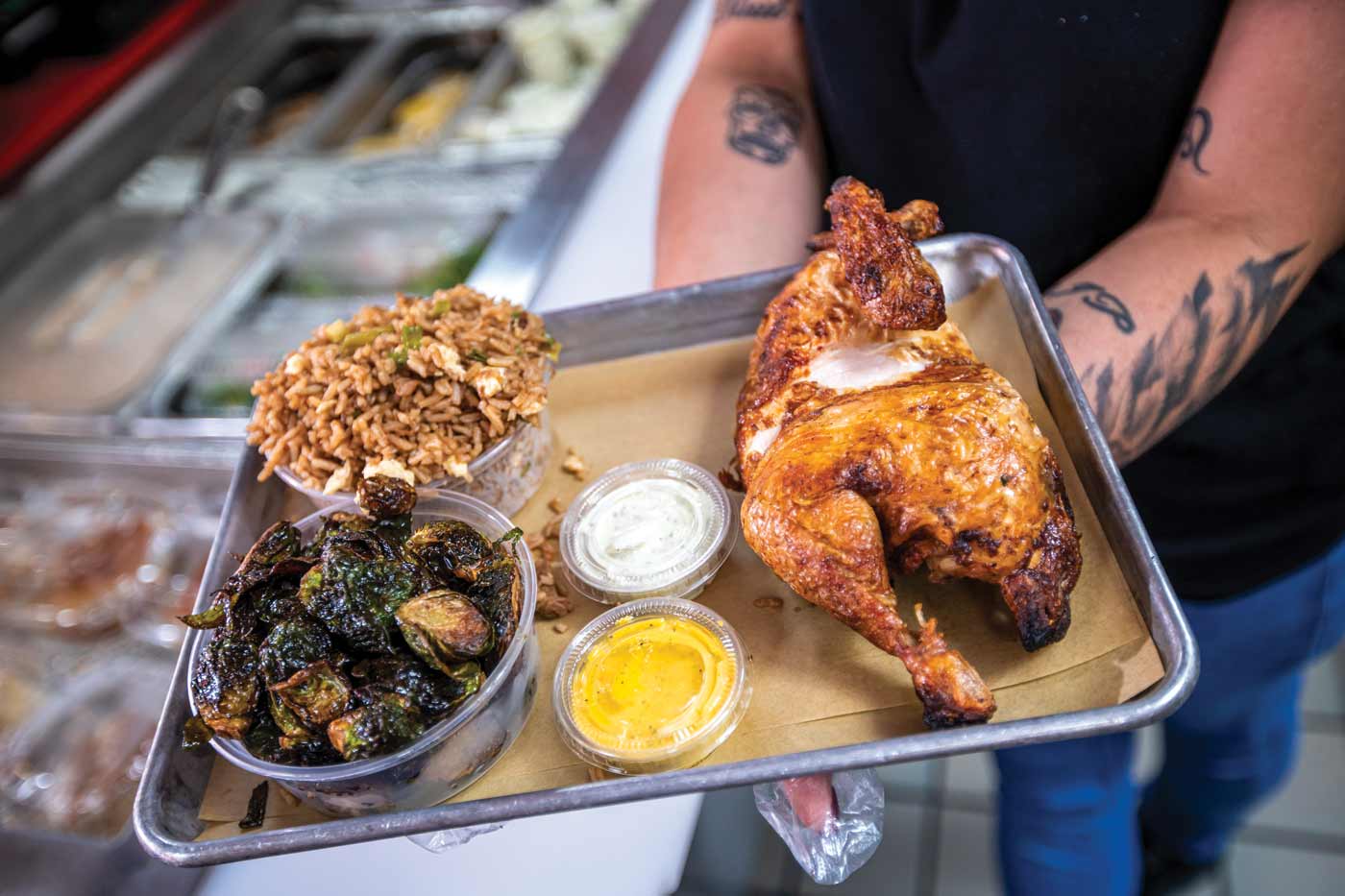 Peruvian chicken is accompanied by a signature dish – Brussels sprouts enhanced with a honey-and-balsamic glaze.

“Our motto is, ‘We’re not just serving great food – we’re serving happiness.’ We want to be sure our customers are happy with the food and service,” Josh says. To help ensure that, they’ve launched a customer loyalty club, Frisco Fresh Club, which currently has about 2,500 members. In addition, a new app was recently rolled out. Josh notes that it not only offers a better online-ordering experience, but there are also enhanced rewards for loyalty club members.

Frisco’s is also committed to caring for the Earth – biodegradable or recyclable products are used as much as possible. 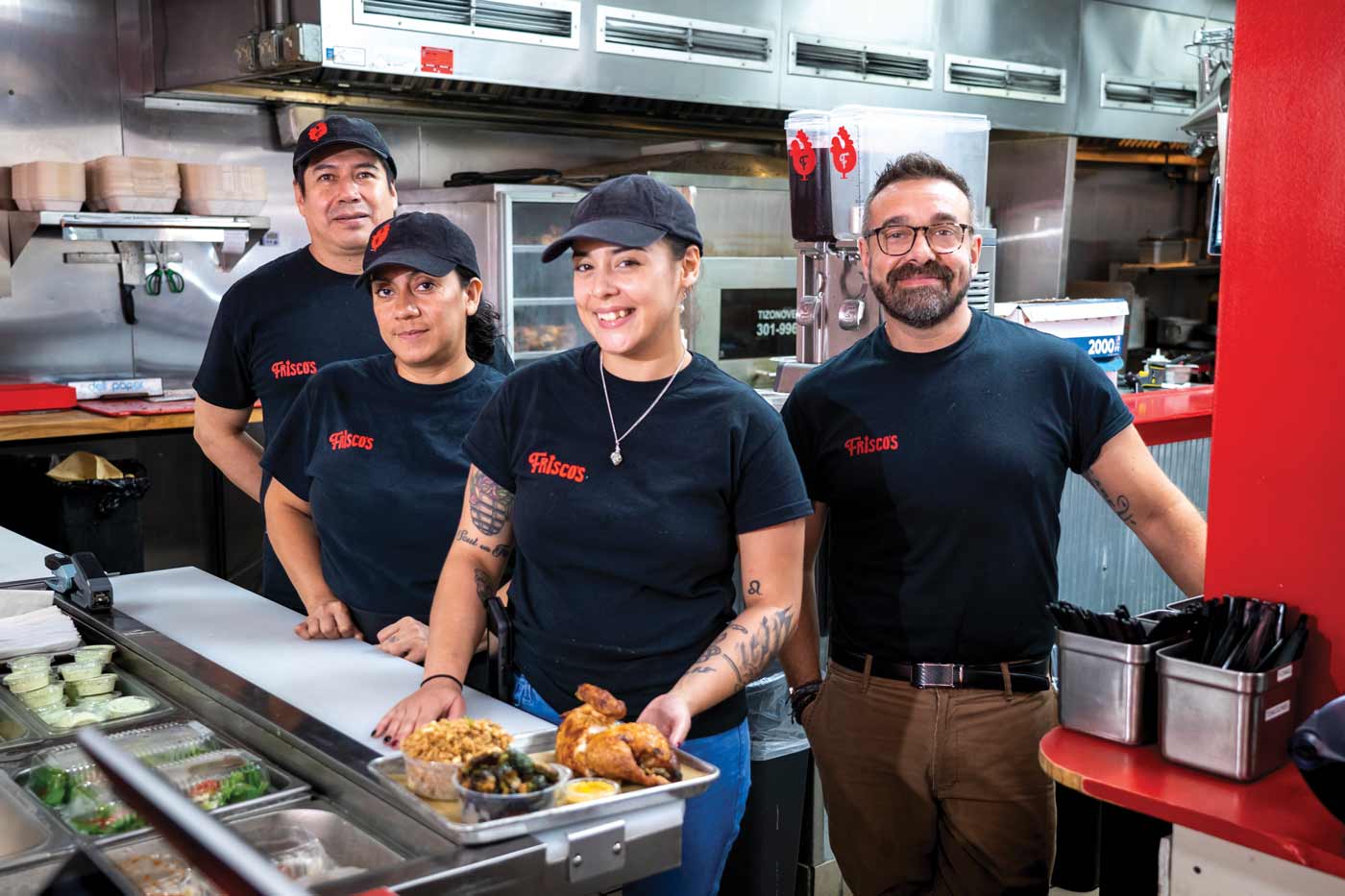 The owners of Frisco’s are also dedicated to supporting the community. Frisco and Josh plan to hold a community-outreach effort each November 1 – Frisco’s anniversary – whereby the restaurant is committed to providing 83 meals for those in need. Why 83 meals? That’s the number of meals the restaurant served on the day it opened.

The new app isn’t Frisco’s only news – a microbrewery is in the works. According to Josh, it will be housed in adjacent space in the same building as the restaurant. Frisco’s is currently seeking a master brewer and looking to secure equipment for the endeavor.  The craft beer would be available at the restaurant.

“We’re located at the edge of the city. We want to make this a destination,” Josh says of their efforts to be customer-oriented. He also shares that Frisco’s may open a second location next year. “It’s too soon to reveal the exact location, but it’s in the works,” he says. 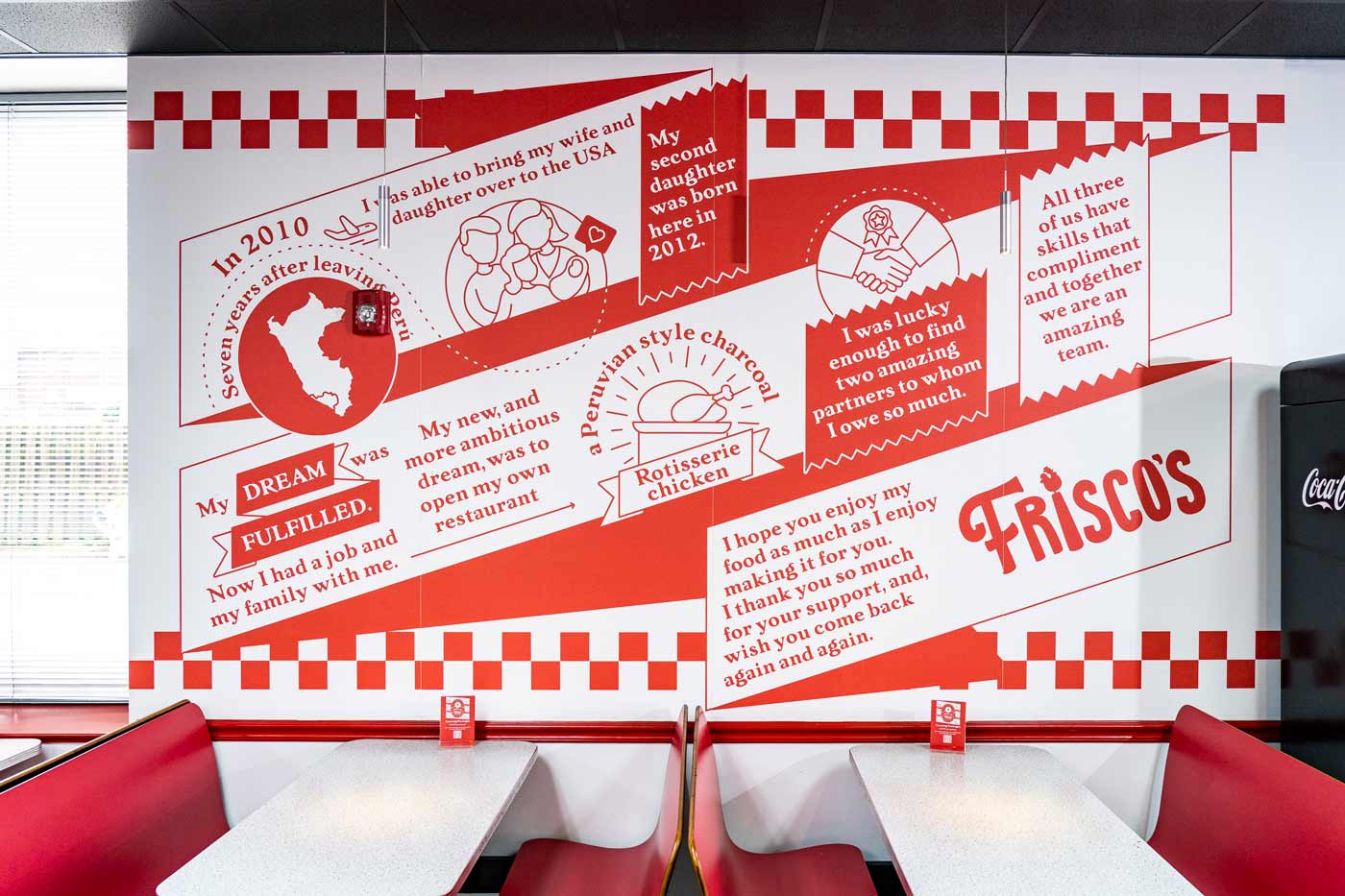 Frisco’s Chicken is located at 454 New Holland Ave., Lancaster. Hours are Tuesday through Saturday, 11 a.m.-8 p.m. Dine-in, take-out and delivery are available. Catering is also available. For more information, call  717-740-5262 or visit friscoschicken.com. Online ordering is available via a link on the website or on Frisco’s app.

Locally sourced chicken is brined in Peruvian spices and slow-cooked over charcoal. Here, it’s accompanied by a trio of sauces whose heat index ranges from mild to hot, Peruvian fried rice and tres leches cake.