Always an avid carpenter, and a master of many trades, Larry Ebersole began making miniature carousels after taking early retirement from Alumax in 1981.

Larry felt he needed something to keep him busy. Using his carpentry skills, he made dollhouses for a while. Then, his brother-in-law, who was a member of the Miniature Carousel Builders in Chambersburg, took Larry to a show, where he got his first look into the world of miniature carousel-making.

Totally surprised by the intricacy that’s involved in building a carousel, Larry admits his first thought was, “I’m not getting into this!” But in time, after helping his brother-in-law with the electrical and mechanical operations of his latest carousel, Larry became “hooked” and began creating his own carousels.

Today, at the age of 84, Larry is still making carousels (24 so far) and is proud to say he is a member of the Miniature Carousel Builders (carousels.com). One of Larry’s greatest concerns is that not enough young people are getting into miniature carousel-making, and he fears that one day it could become a lost art. 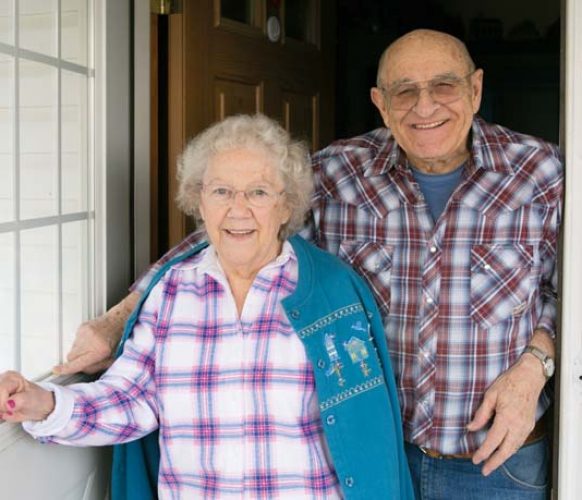 Larry and his wife, Retta, have been happily married for 60 years. In February, they celebrated the milestone by renewing their vows in a ceremony that is held annually at Masonic Village in Elizabethtown. 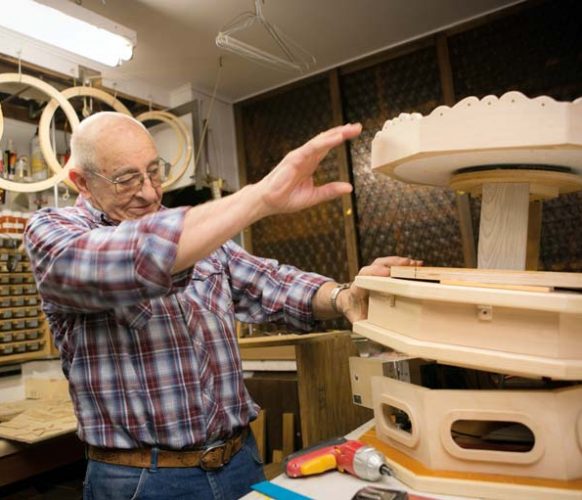 Larry at work on a carousel in his basement workshop. 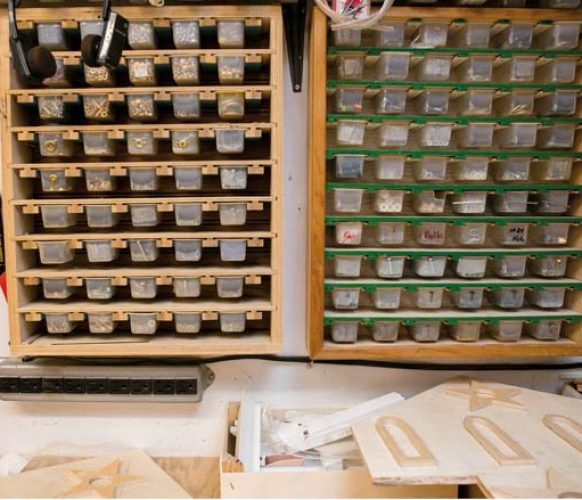 Larry is a stickler for recycling. He built this box and outfitted it with plastic containers that hold nuts, bolts, nails, screws, etc. He collected the containers, which once held pancake syrup, through having breakfast at McDonald’s. Friends who knew he was collecting the containers donated theirs as well. 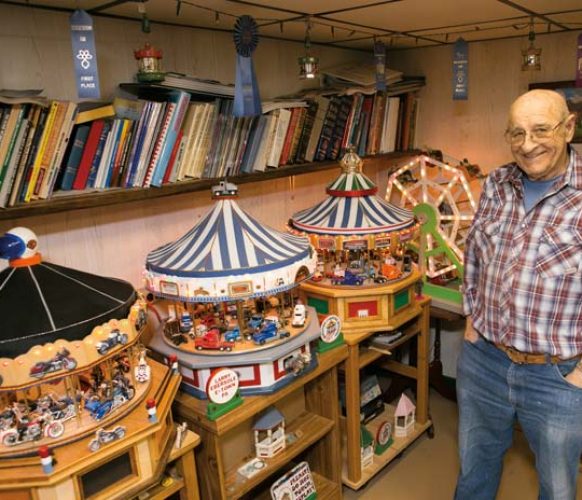 A ferris wheel and several of Larry’s carousels/merry-go-rounds are on display in the Ebersoles’ home. 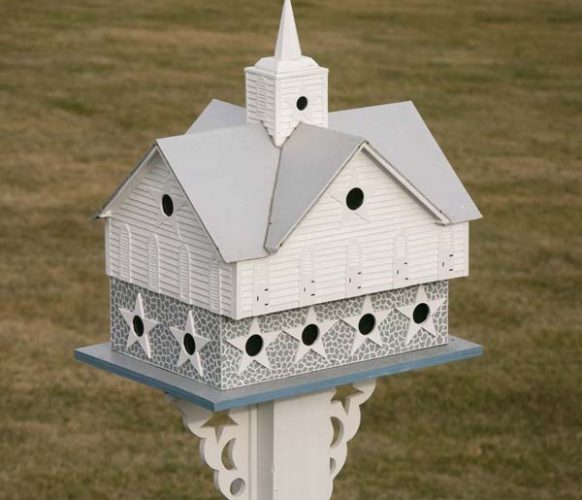 Larry’s Star Barn birdhouse was designed with purple martins in mind. Popsicle sticks are among the building materials Larry uses to construct the birdhouses. 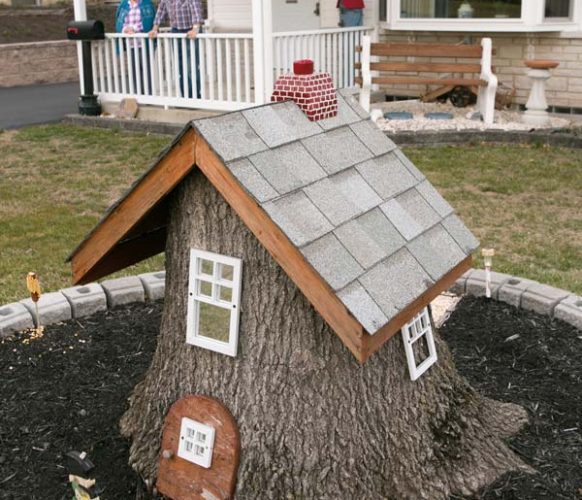 When one of Retta’s favorite trees had to be cut down, Larry gave it new life as a home for gnomes. 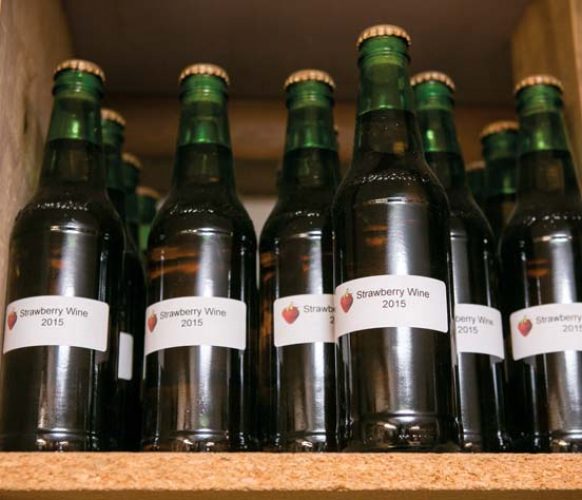 Wine-making is another of Larry’s hobbies.
While Larry never received any formal art training, he credits his father for having taught him all he knows today about anything mechanical and electrical, both of which are integral elements of building carousels. He says the artistic part of carousel-making just comes naturally to him.

Besides carousels, Larry also makes merry-go-rounds. There is a difference between the two. “Merry-go-rounds have all kinds of different animals on them,” he says, referring to deer, dogs, lions, etc. “Carousels, especially the earlier grand carousels, have nothing but horses on them,” he informs. Larry’s merry-go-rounds have featured everything from Harley-Davidson motorcycles to  tractor-trailer trucks and farm tractors. He is presently working on one whose theme is ballerinas and nutcrackers.  Looking ahead, he plans to craft one that employs an emergency equipment theme.

His carousels vary in size, with most being in the vicinity of 30 inches. “It is important to be able to get the carousels through doors and out of the house when they’re finished,” he explains.

It takes approximately 400 hours to make one carousel, depending on its complexity. One of Larry’s first carousels (and possibly his favorite) was a “double-decker” that required more than the typical 400 hours.

“My carousels are built from the bottom up,” he instructs. The base, or bottom box, houses the electrical and mechanical (motorized) part of the carousel and also holds the music, which emanates from a small cassette player. Above this is a ramp utilized in making the horses go up and down as they go around. The platform, which is the floor of the carousel, comes next. The final element is the canopy. But there are many artistic and intricate steps in between.

All of Larry’s horses are ceramic and fully painted. There is a small door in the bottom box of all his latest creations that enables the onlooker to peek inside.

Larry’s creativity is evidenced in the “jewels” he uses to embellish his carousels. He looks for sale jewelry wherever he goes and salvages colored stones from necklaces and bracelets. He also uses brooches and earrings to add glam to his works of art. He quips, “I am well-known at Kmart in Elizabethtown.”

The right lighting is also very important. He never uses blueprints – he just formulates an idea and runs with it.

One of Larry’s double-deckers was purchased by a Japanese businessman who wanted it for a museum in Japan. That transaction was a rarity, as over the course of his “career,” Larry has sold only four of his miniature works of art. The rest have either been given away or donated to benefit local charitable organizations. One such carousel changed hands three times, earning a whopping $8,000 for three different organizations. Larry confides, “What better gift could I have received than by giving it away?”

One birdhouse in particular is a standout – his Star Barn reproductions that are built to serve as residences for purple martins. In fact, his miniature replicas of the iconic barn, which will be reconstructed at Ironstone Ranch in Elizabethtown this summer, have all been award winners at area shows. 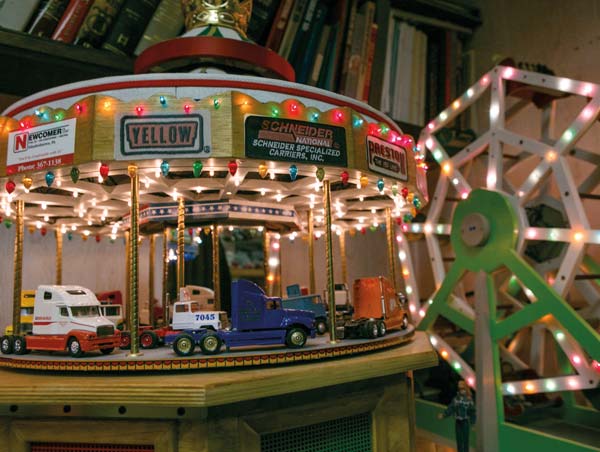 One of Larry’s carousels pays homage to the trucking industry.