Baseball might own the title of America’s Pastime and theme parks may
have brought in 371 million visitors last year, but movies are number one when
it comes to what Americans really like to do with their free time.

It’s not even a close competition. According to the Motion Picture Association of America, more than 1.3 billion movie tickets were sold in North America in 2013. Compare box-office results to Major League Baseball’s attendance of 74 million and clearly the silver screen is what people want to see. The draw is no longer cookie-cutter flicks from Hollywood. Theater owners are enticing people by offering some new (and not so new) choices. 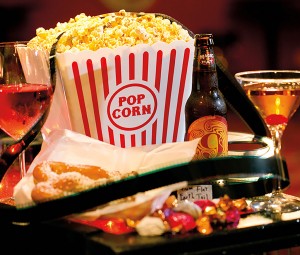 In addition to the usual treats that are available at the theater’s concession stand, adults can order their favorite beverages.

It was a happy moment. The first time I ever ordered a beer at Ephrata Main Theatre, I was a bit giddy with excitement. I came to watch X-Men: Days of Future Past with my family and took a peek in the cooler after ordering my popcorn. I was aware that the theater, which is operated by Lily’s on Main owner Steve Brown, started serving alcohol during showings, but I just hadn’t gotten a chance to enjoy a beer with a movie until that moment. I ordered a Magic Hat No. 9 – something a bit sweet to go with the salty popcorn.
Because Lily’s (housed above the Ephrata Main) owns a restaurant liquor license (as opposed to a tavern), it allows Steve to serve alcohol in an all-ages environment. (Of course, the Ephrata Main promotes responsible drinking and adheres to all state laws for the sale of alcohol.)

The theater has also been known to serve themed drinks for special movies. I’m looking forward to December when The Hobbit: The Battle of Five Armies releases, hoping Steve brings back the Midori slushies he served during the last Hobbit installment. A selection of craft and big-brewery beers are available, and so is wine. There are even upscale snacks to pair with your beverage like elegant cheeses and creative charcuterie. Let it be known the Ephrata Main is a fully functional theater with updated technology; there is no table seating. Steve encourages people looking for dinner and a movie to dine upstairs either before or after, and receive 10 percent off their meals with a movie ticket. 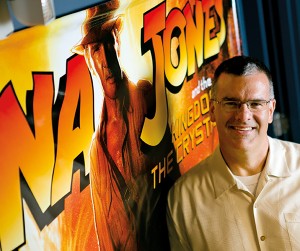 Penn Ketchum’s version of cinematic gems and classics are screened during the Monday Night Movies series that runs through December 15 at Penn Cinema in Lititz.

Theater owner Penn Ketchum admits there is still a little kid in him. The desire to have fun is the source of Penn Cinema’s Monday Night Movies. For several months, two times a year, Penn brings in movies he and others at the independent cinema want to see again on the big screen. While some of the films in this series are true classics, others are pop gems. “We define ‘classic’ as a cool movie we want to see on the big screen,” he explains.

Over the years of screening Monday Night Movies, Penn has learned a few things about what his audience wants. R-rated action flicks don’t work – sorry Die Hard fans. Instead, people go crazy for musicals, with Grease being one of the most popular. And, there are certain seasonal films he must show.

Monday Night Movies kicked off in September with The Sound of Music and will run until mid-December with the holiday gift of National Lampoon’s Christmas Vacation (December 15). November offers Monty Python and the Holy Grail (November 3) – if you ever wanted to fear a rabbit, be taunted by the French or serenaded by the knights of Camelot, then this is your movie! Things get a little more romantic on November 10 when Richard Gere and Debra Winger sizzle in the Oscar-winning An Officer and a Gentleman. Comedy returns on November 17 with the 2007 version of Hairspray (starring John Travolta), followed by the highly demanded Planes, Trains and Automobiles on November 24. Gone with the Wind, which is celebrating its 75th anniversary, will be shown December 1. Airplane! is scheduled for December 8. All shows start at 7 p.m.; encores are held the next day at 10 a.m.

The definition of an art-house film surely has changed over the years. The days of obscure and experimental art in the form of a motion picture have made way for more serious, introspective and retrospective films featuring some of the most widely recognized actors of the day. Where John Waters’ Mondo Trasho let us know how Baltimore was keeping it weird in 1969 – well before Austin or Portland – today, we have To Be Takei, a look at the life of activist, comedian and helmsman of the USS Enterprise, George Takei. “Art house” has moved from the surreal to the real, for the most part.

Leading the charge in Lancaster’s art-house scene is Zoetropolis. Opened in 1996 by Leigh Lindsay and reborn by Karen Roberts in 2013, the intimate, single-screen theater offers movies not common at most mega-plexes.

Running until November 6 is The Skeleton Twins, featuring SNL alumni Bill Hader and Kristen Wiig as estranged, death-defying twins. November 7-20, Zoetropolis gets satirical with Dear White People, which pits four black, Ivy League students against a riot over an African American-themed party thrown by white students. So far, the film has won four festival awards including the Special Jury Prize at Sundance.

When the Ware Center opened, directors knew they had a unique ability to serve county residents as the premier visual and performing-arts center. The Ware Center Film Series debuted almost immediately. Even though the center is affiliated with Millersville University, the film series was created with an emphasis on serving the public (as the university has a separate film program tied to its curriculum).

“Our film series is really aimed at the community,” explains Laura Kendall, director of the Office of Visual & Performing Arts at the Ware Center. “We have a committee who helps choose the movies we bring in. But, we also look at critic reviews and earlier viewer responses.”

When setting out to choose films, the folks at the Ware Center want to provide a varied experience that extends to foreign languages. Laura is excited about the showing of Love is Strange, November 16-18. Starring John Lithgow and Alfred Molina, Love is Strange tells the story of Ben and George, and how their marriage is taxed when they are forced to move into separate residences.

The epicenter of American filmmaking has its name blazoned on Mt. Lee overlooking Hollywood Hills, but Hollywood is not the capital of world cinema. Termed “Bollywood” sometime in the 1970s, the Hindi-language film industry produces more than twice as many films annually as Hollywood, but is only third in gross revenue. Riding a wave of exposure created by Slumdog Millionaire, Bollywood films have seen an increase in American popularity.

Some of those films can be seen at Regal Manor Stadium 16 in Lancaster. Regal Entertainment Group has jumped at the opportunity to be at the forefront of mainstreaming Bollywood films. The corporation has dedicated 38 theaters as “Bollywood Theaters.” Not getting the full slate of Hindi-language films, the Lancaster location receives select movies when available.

Even if Bollywood is not your thing, you have to see a movie – any movie – and check out the new king-size reclining seats at Regal. They can only be found at nine theaters nationwide and Lancaster is one of them! 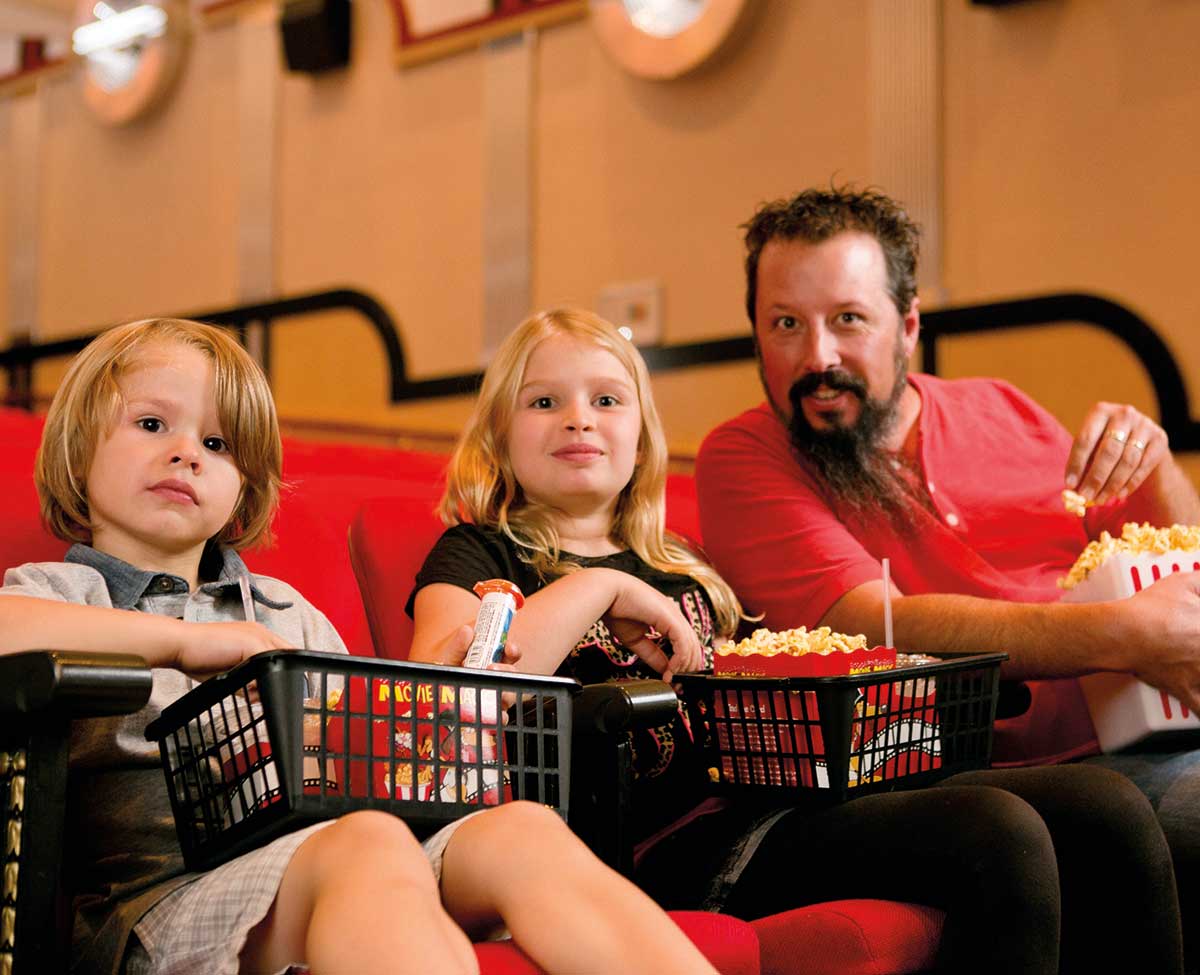 The kids and I settle in at the Ephrata Main Theatre .