Lancaster’s Extraordinary Give, a 24-hour tour de force that envelops the Lancaster community in a donation-a-thon for 367 area nonprofit organizations, is one reason why the Lancaster Metropolitan area is rated the most giving city in Pennsylvania by Philanthropy.com.

The extraordinary give is a shining example of how the people of Lancaster County choose to invest in the future of their community. The Lancaster County Community Foundation’s fourth Extraordinary Give, which kicked off at the stroke of midnight last November 20, generated $6.1 million over the course of 24 hours, topping the previous year’s record by 35%. Thanks to the Foundation and its corporate sponsors, donated dollars are stretched by another $300,000.

While many donors did so with a few clicks on their home or office laptops – online donations were made at the rate of $70 per second – there were plenty of more socially oriented opportunities to make donations. The Eastern Lancaster County Library pulled an all-nighter in New Holland, staying open midnight to midnight. Supporters of the Lancaster Housing Opportunity Partnership rang in the Extra Give at Characters Pub, with music, food and camaraderie. Leo’s Helping Paws kicked off its giving efforts at 5 a.m. at Ephrata’s Pancake Farm. Amenities like complimentary cappuccinos and homemade pie, musical and Shakespearean performances and Star Wars costumed characters were the attractions at various nonprofit headquarters and affiliated locations throughout the day.

The Lancaster County Community Foundation took its giving on the road with the Give Mobile. Generous-minded passersby could take a moment to download the Extra Give app or donate then-and-there to their favorite causes at the Amtrak train station, Willow Valley Communities, and hotspots in Lititz, Bird-in-Hand and Ephrata. The Give Mobile’s path was tracked like Santa’s sleigh on Christmas Eve by a local radio station. Let no giving stone go unturned!

by evening, the streets of downtown Lancaster were filled with Extra Give energy. The Ware Center’s Giving Party featured drinks and hors d’oeuvres, music, live animals and film, as well as representatives of 19 nonprofit organizations, who were standing by to help visitors get to know their missions and needs.

A collaboration of 14 nonprofits created a giving-focused party at King Street’s Tellus360. The Great Giving Gig featured musicians rocking for the cause, as visitors were invited to party as they donated. “We’re paying tribute to our thriving city,” said Tellus360’s online invitation, “exemplifying how Social Enterprise works by partnering local FOR-profit businesses with NON-profits, inspiring GIVING and social responsibility.”

The epicenter of the Extra Give was buzzing a block away at the Lancaster Marriott at Penn Square and the Lancaster County Convention Center, where the finale of the big day – the Extra Give Fest – was in full swing. Two stages featured a rotating list of seven local musicians and groups, from the mellow jazz of Amy Banks to the bluegrassy rock of Vinegar Creek Constituency. The Marriott lobby was teeming with a diverse cross section of folks, many with philanthropy on their minds.

Lisa Groff, of The Groffs Family Funeral and Cremation Services, was inspired. “All these wonderful organizations need our support,” she said. “This is a milestone for our community.” Lisa had donated throughout the day, but “when you’re here, you feel like you can give a little more,” she said.

Benchmark Construction Company’s Mike Callahan is a board member of the Lancaster County Community Foundation. “I’m here as a rah-rah cheerleader,” he explained of his role, “and it’s a great thing to cheer about.”

“It’s the connecting, the touch, the sense of community getting together for philanthropy,” explained Tracy Cutler, who oversees much of the Extra Give’s initiatives as the Foundation’s communications VP. “We’re engaging a new generation,” she observed, noting that in 2014, 30% of the donors were first-time givers.

That new generation was well-represented at the lobby’s “Donation Stations,” laptop kiosks that allowed donors to make their gives on the spot. It worked for Aimee Dilucido and Matt Clement, who chose Music For Everyone for their donation. “One of our first dates was walking around the city looking at the [Keys for the City] pianos,” Aimee recalled, which is one of the organization’s projects. And Matt played the violin while in elementary school, which was made possible by a community program in his hometown, “so I know how important it is,” he said.

The foundation also engaged some local creative energy. Specialists in building the infrastructure of large-scale events, Shumaker PDT (Plan/Design/Transform) routinely designs party spaces for corporate and individual clients. Atomic Design of Lititz brought its lighting and set construction creative juices to combine with Shumaker to inject a music festival atmosphere into the mix.

And then there’s the Griest Building. Penn Square’s stately “skyscraper” was illuminated by Atomic Design’s tech wizards in an ever-changing pattern of lights, a visible sign of the energy flowing throughout the city on this special night.

The minutes ticked down to midnight, and the crowd moved into the Convention Center’s ballroom for the magic moment: the announcement of the grand total of the day’s fundraising by Foundation CEO Sam Bressi. The crowd gathered to watch the tote board continue to move toward – could it be? – the $6 million threshold.

Yes, $6,132,344 is ultimately the grand total, and a collective sense of joy, wonder and gratitude permeated the ballroom. Extraordinary, indeed. 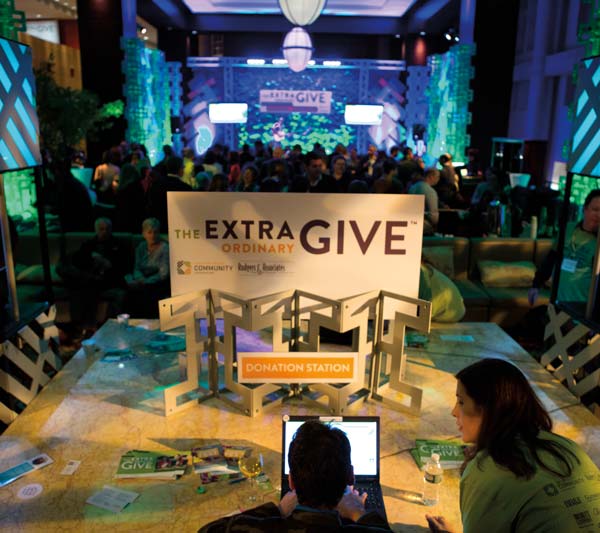