If your idea of camping is opening the hotel window for some fresh air, an RV adventure may not be for you. But for four media professionals, a girls-only glamping getaway was the perfect way to unplug. 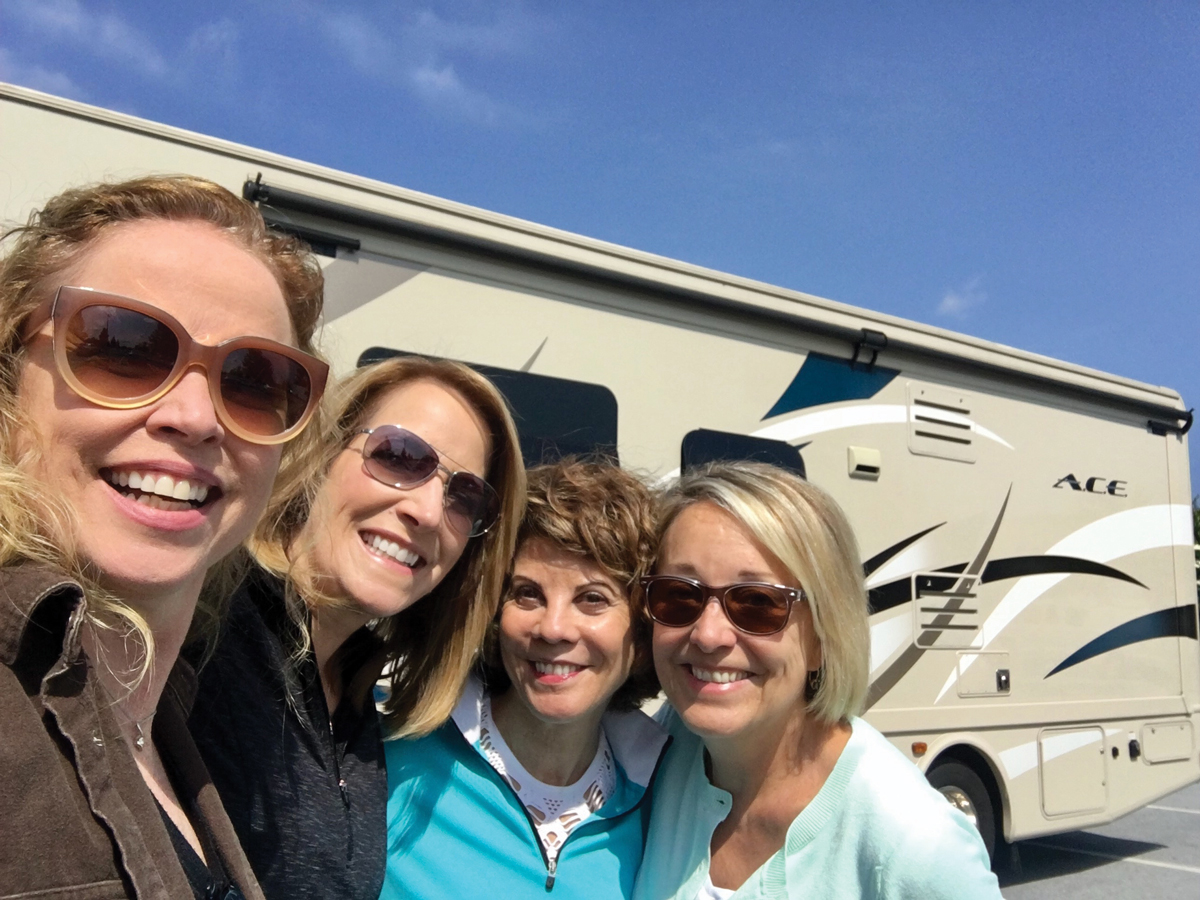 The foursome quickly learned that a womenpowered RV is a rarity among campground guests. “Whenever we arrived anywhere, people would say, ‘Have him pull in over here,’” Cara recalls. Lori adds, “People were floored when they saw four women get out of the RV.” Left to right are Cara Williams Fry, Lori Burkholder, Nancy Tulli and Kim Lemon.

With nearly three decades of friendship behind them, Kim Lemon, Lori Burkholder, Nancy Tulli and Cara Williams Fry have covered a lot of ground – literally as well as personally and professionally. Each having built a successful career in local media, they share an understanding of the television industry from both in front of and behind the cameras.

Cara, senior vice president and chief content officer of public broadcasting’s WITF, spent her early years at WGAL, where Nancy was the local, national and general sales manager for 20 years. Kim and Lori, both WGAL News8 veterans, share a combined 70 years as reporters and anchors on the station’s news desk. 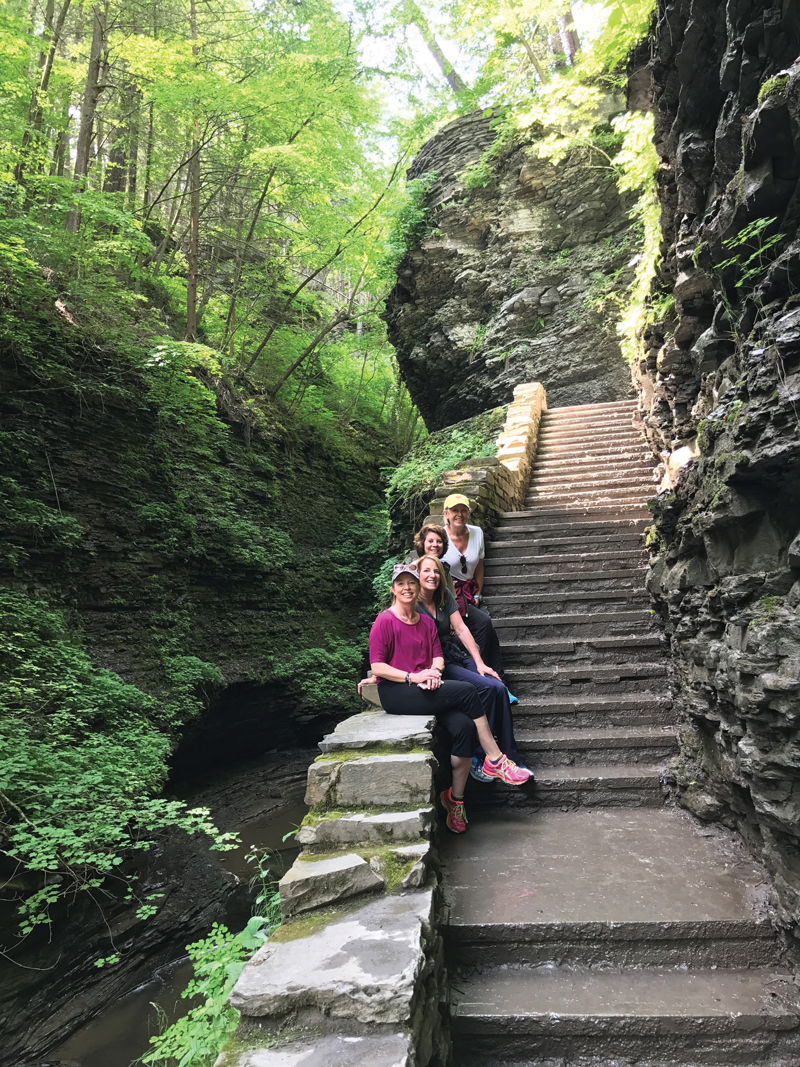 Over the years, the four have bonded over elegant champagne brunches, spa days and fishing expeditions on the Chesapeake Bay. Two of them even ventured to South Africa on a photo safari. Wherever their travels have taken them, they’ve shared life’s joys and challenges along the way.

It was not a stretch, then, when Kim suggested a camping trip in an RV. True to their shared sense of style, this trip was not just camping – it entailed glamping, as in glammed-up camping to the level of luxury. “We kept our foot in the door of fabulousness,” says Kim, describing the approach the foursome took to crafting the great adventure. 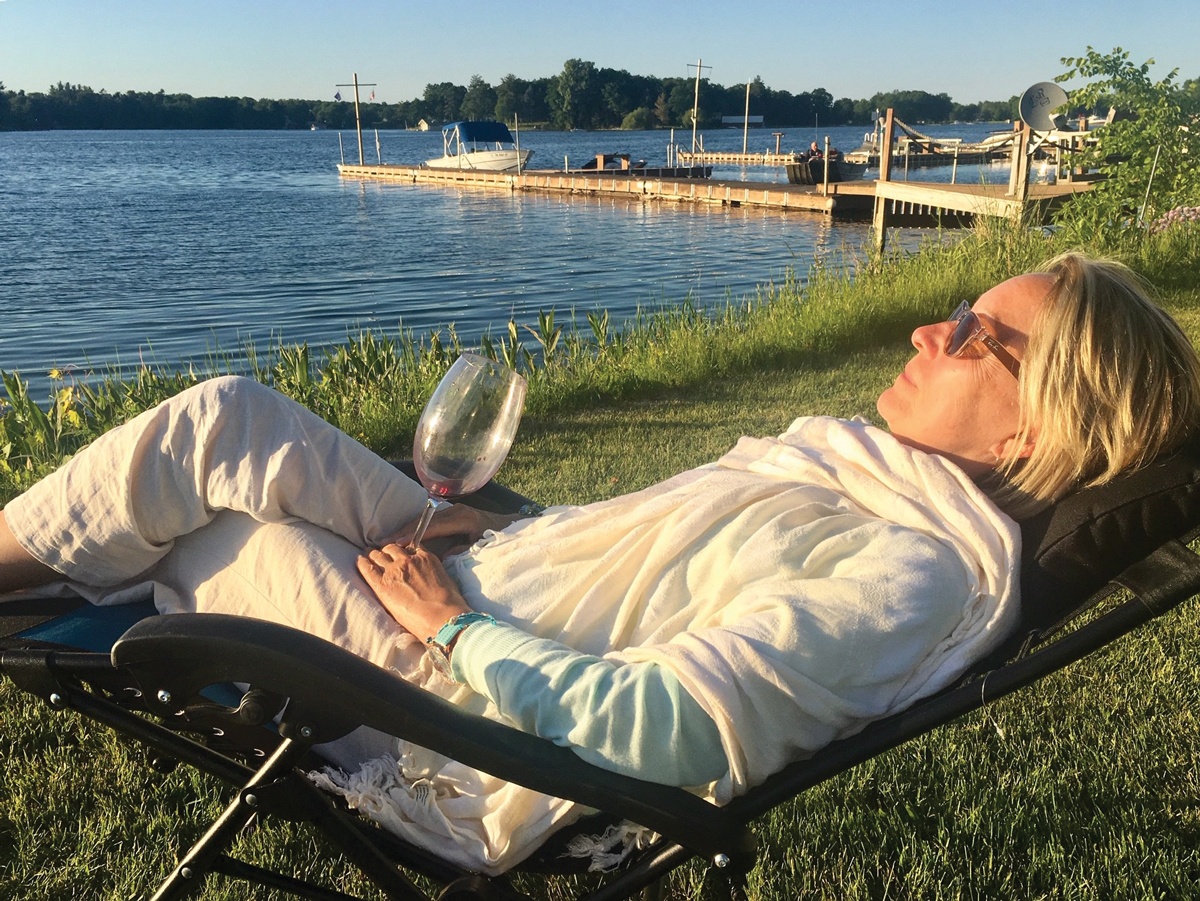 Kim takes a quiet moment to relax and reflect. “It was a splendid mix of adventure and trust in each other,” she says.

With about a year’s coordination of full schedules, research and planning, the fiveday “extended slumber party” was booked for early June of last summer. The 29-foot-long recreational vehicle was packed with camping essentials and beyond, the course was charted, and the odyssey began.

With the St. Lawrence Seaway’s Thousand Islands as their ultimate destination, and a two-night stop in Watkins Glen, driving the rolling house on wheels was an adventure in itself. Cara and Kim, both nascent RV drivers, shared the time behind the wheel. “We each played to our strengths,” Lori says of the divisions of duties. 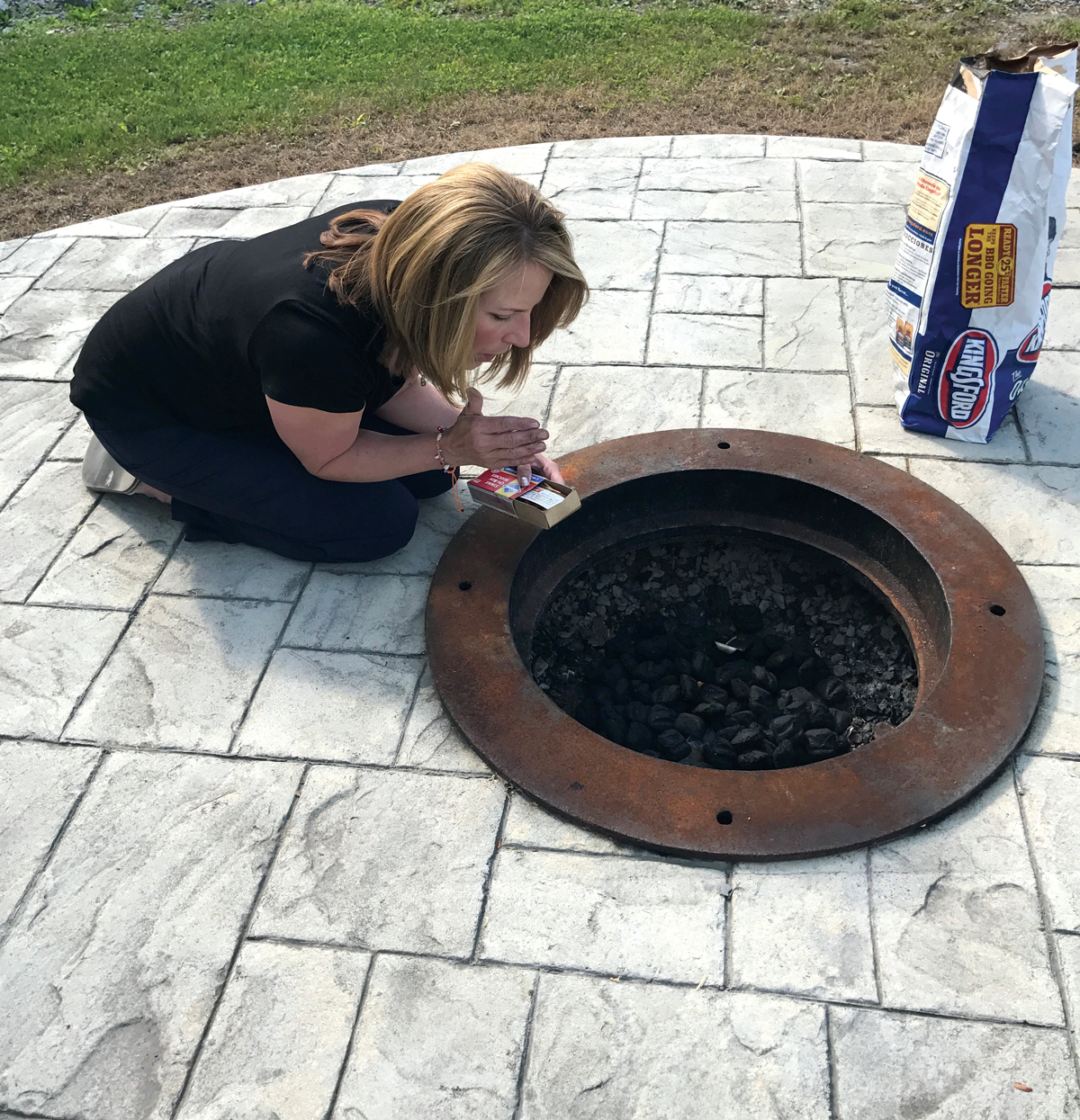 Lori called upon her skills learned as a Girl Scout to light the daily campfire.

Lori and Nancy tapped their mutual love of cooking to create gourmet-level meals wrapped in foil and ready for the campfire. A former Girl Scout, Lori was responsible for kindling the daily campfire. Cara’s tech-savvy, analytical approach put her in charge of all things mechanical in the RV and its navigation. 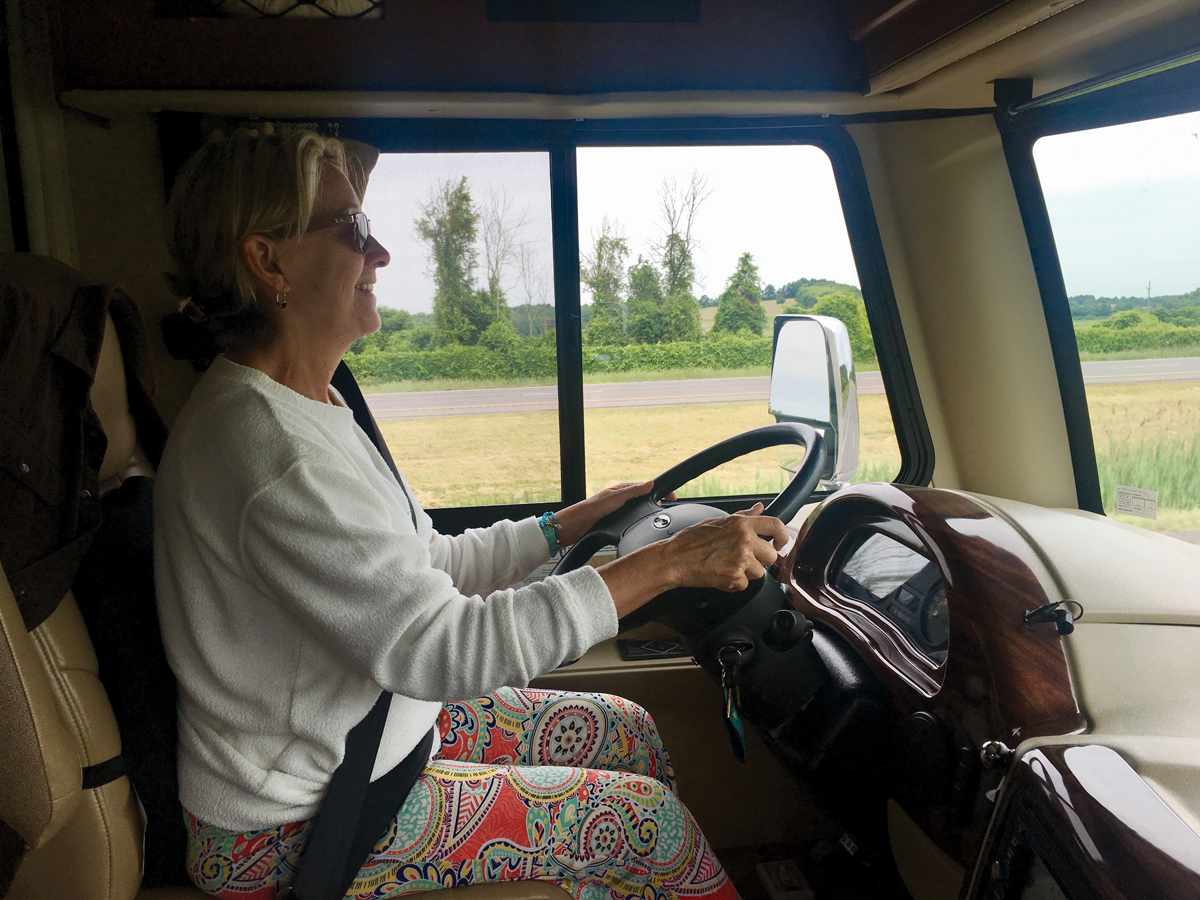 Kim takes the wheel of the RV.

Kim brought panache to the table with linen tablecloths, glass stemware and candles, and honed the itinerary and planning thanks to her television production training. “We are competent and confident in our own ways,” Nancy observes. “Each of us stepped up.”

“We’re all smart women,” Cara remarks. “We divided responsibilities and successfully drove, navigated, parked, dropped the jacks, bumped out the side and hooked up the power, water and, yes, plumbing, all while laughing, talking and planning the next day’s adventure.”

Besides perfect summer weather, beautiful vistas of Watkins Glen’s waterfalls and gorges, and a picturesque waterfront campsite in Swan Bay, New York, one of the best features of the getaway was the ability to be anonymous – a rarity for two very familiar faces in Central Pennsylvania. “No one knew who we were,” says Lori, which allowed for days with little makeup and the ability to unplug from television and breaking news. 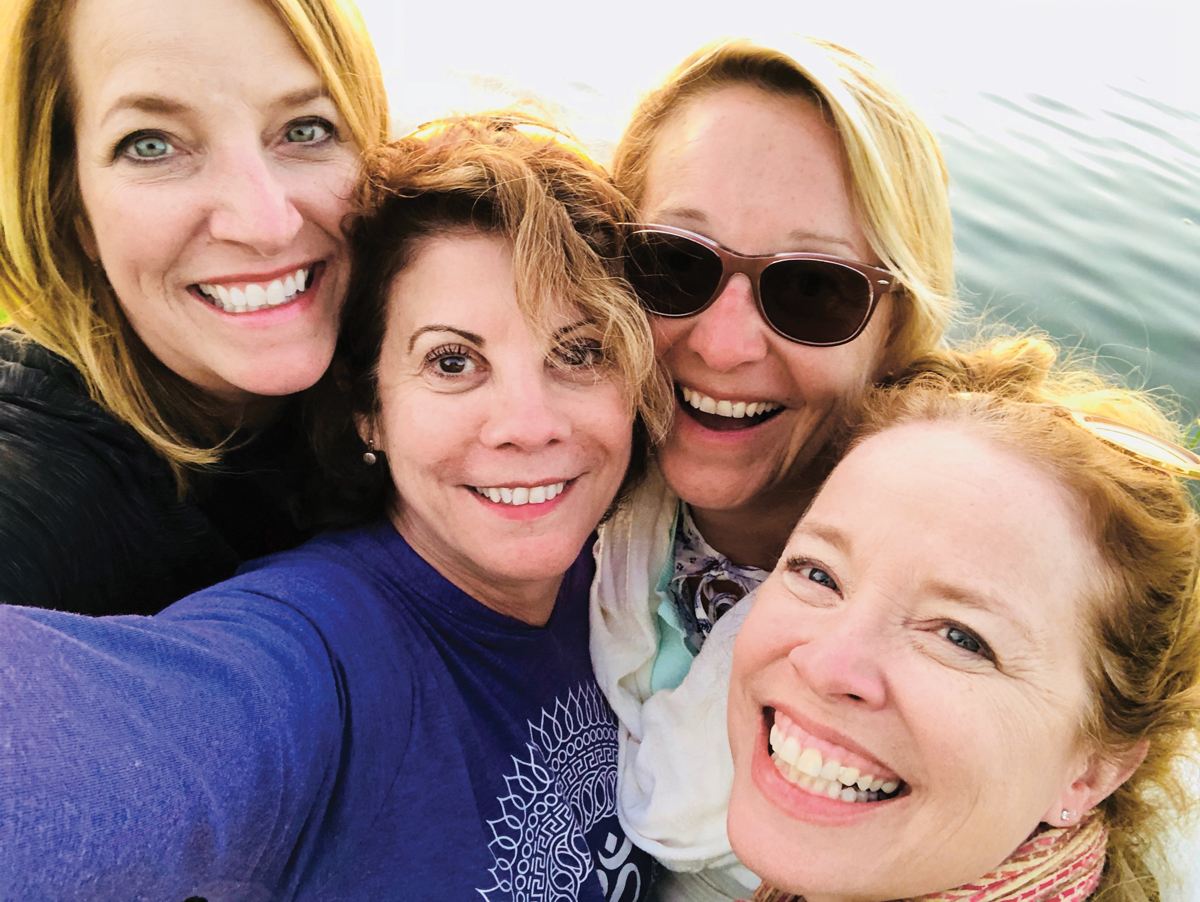 Of course, a vacation inevitably holds at least one unexpected event, and that was a dead RV battery that needed a jump from a helpful campground manager. “We all agreed that one thing would probably happen, and we handled it,” Kim notes. “I felt completely safe with these women because we all have each other’s backs.”

“I highly recommend experiencing a trip like this, where women support each other,” Lori says. “Outside of family, it’s important to have friends who you completely trust and feel supported by.”

Nancy adds, “At our core, our instincts and how we each approach situations are similar. We are open, embrace life and want to share experiences. I feel blessed for their friendship.”