Good carbs, which are derived from plant-based foods such as fruit, vegetables, beans and grains, are essential to our health. With the summer fruit and vegetable season still months away, now is the perfect time to experiment with grains.

Fruit, vegetables, beans and grains not only provide vital nutrients, but they also digest at a slower rate, thereby fortifying the digestive system with the fiber it needs to function properly. Good carbs also aid in controlling blood sugar levels and cholesterol, thus having a positive impact on our cardiovascular systems. Good carbs also play a role in the prevention of certain cancers.

Grains are all the buzz in the healthy-eating movement. They’re readily available in health food and specialty stores and even in supermarkets. Still, people tend to get caught up in worrying about the water-to-grain ratios, what they go well with, etc. My advice is to just experiment. One of the best ways to get your feet wet is to simply cook whole grains in water and taste them as is. Begin by taking a big pot of water, bring it to a boil, salt it a little if you like, and add your grains, cooking them according to the package’s directions (if they exist). Over time, you’ll learn to adjust the cooking time to achieve the texture and chewiness you prefer. If directions are not included, simply cook the grains until they are tender enough to enjoy.

The next step is to drain the grains and taste them. Determine if you’d like them hot, perhaps with butter and Parmesan. Maybe they’d be better chilled, with some diced vegetables and a little vinaigrette to create a grain salad.  Or, maybe the grain tastes like another variety you have had in an application, and you think it might work equally as well.

As for introducing whole-grain pasta (or anything for that matter) to your family’s diet, take it in steps. Kids will notice if there’s a sudden switch. Maybe start with half the amount of pasta you regularly use and substitute whole-grain for the other half. Adjust the amounts over time until you’ve made the switch.

This month, I’m sharing a few dishes that simply let the grains be themselves, allowing for all of their “whole-grain” goodness to shine. 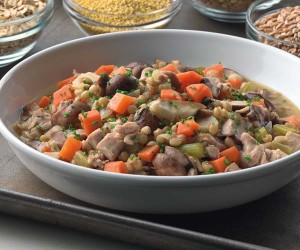 Wheat berries have been around for some time; you’ve probably seen cooked wheat berry salads at local delis. To make this stew, cook hard golden winter wheat in chicken broth. (You can make enough for an army and freeze some for later use.) The next step is to sweat some chicken, mushrooms and aromatic vegetables for a little while in order to develop some flavor. Then, simmer the ingredients in the broth and toss in some cooked wheat berries. What you get is a hearty soup or stew-like dish that’s ready in a matter of minutes as opposed to hours. 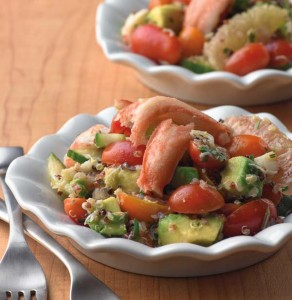 Sometimes even just a little cooked grain added to light, bright, simple salads can deliver amazing results. Such is the case with quinoa, which is the perfect ingredient for a Yucatan-style salad of crab, avocado, cucumber, onion, tomato, pomelo (a grapfruit-like citrus that is sweet and mild) and lime. I added a bit of cilantro and olive oil and then a few spoonfuls of the delicate grain. Aside from adding a huge shot of nutrients, the grain helps hold the delicate dressing that results on the crab, fruit and vegetables a little better, making each spoonful even more flavorful. 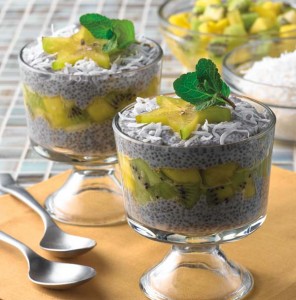 When I learned about this no-cook, overnight “chia seed pudding,” I had to give it a try. I didn’t necessarily do it for the health factor, but rather because it appealed to my lazy side.  You simply take this “super grain” (actually it’s a seed), and pour it into a flavorful, milk-type base (roughly 1/4 cup of chia to 1 cup of your liquid). Pop it into the fridge, and bingo, the next day it is a thickened, tapioca-like pudding that is absolutely delicious. It’s fun to eat, too, thanks to the swelled kiwi-like seeds that pop when you eat them.

The possibilities are endless. For example, you can use coconut and yogurt to create a healthy, easy-to-make breakfast. I decided to go in more of a dessert direction and used part coconut liquor (think Coco Lopez), part unsweetened coconut milk and part milk to create the pudding. You can lighten up the pudding even more by folding in some whipped cream before serving.  And, if you want to make it with stevia, almond milk and organic coconut extract, have at it. Layer it with some ripe, diced, tropical fruit and top it with shavings of coconut, and you have a yummy parfait.

While buckwheat is viewed as a cereal grain, in reality it’s a fruit seed that’s related to rhubarb and sorrel. Its fragrant flowers are bee magnets; the resulting honey is dark in color and has a strong flavor. Buckwheat is native to Russia, Northern Europe and Asia, but is now grown throughout the Northern Hemisphere. Buckwheat can be used to create breads, muffins and pancakes. It makes for a hearty breakfast cereal (similar to oatmeal) and can add texture and flavor to soups/stews.

For a time, Americans only knew this seed as a novelty item called the “Chia Pet.” But, in pre-Columbian Mexico and other areas of Central America, the seed rivaled corn as a food crop. Legend has it that after the ancient Aztec warriors soaked the seeds in water and imbibed them, they could run for hours on end. Two years ago, chia seeds became the darling of the healthy-eating movement. Demand for the seeds, which are high in Omega-3 fats and fiber, skyrocketed. They became ingredients for smoothies and high-energy drinks, cereal, energy and granola bars and yogurt. The applications are endless.

Barley has been cultivated for 10,000+ years. Considered a superfood, early Greek athletes attributed their strength to barley-laden diets that provided them with copious amounts of vitamins, minerals and other nutrients. Roman gladiators were known as “hordearii” or “eaters of barley.” The grain was a diet staple during the Middle Ages, when wheat prices were too expensive for the common man to afford. Barley is a versatile cereal grain that delivers a rich, nutlike flavor and chewy texture. Hulled barley denotes that the outermost hull of the grain has been removed. Use it in soups/stews and to create beverages such as beer. Its flour can be used for baking purposes. Use cracked barley or barley flakes to create a hot cereal. Cook it to create a pilaf.

No, millet isn’t just for the birds! Originally grown in the dry climates of Africa, millet made its way to China and Europe, where it was widely used during the Middle Ages. Today, it remains a staple for 1/3 of the world’s population. Millet is a versatile grain. It can be used to create a porridge-like breakfast cereal or a mashed-potato-like side dish. Substitute millet for rice. Toss it with veggies.

Once grown exclusively in the Andes Mountains of South America, quinoa is now being successfully grown in the Rockies. Regarded as “the mother grain” and “gold of the Incas,” this superfood (a complete protein, it’s high in vitamins and minerals) is readily available on grocery shelves across America. Its sweet, nutty flavor makes it a popular substitute for pasta and rice. Use it in stews, soups and casseroles, too. While there are hundreds of varieties available, white is a good choice for first timers, as the red and black varieties offer more distinctive flavor profiles.

There are two types of wheat: winter (planted in the fall/winter and harvested in spring/summer) and spring (planted in spring/summer and harvested in fall/winter). Within those are six classifications, including red winter wheat, which is the variety that’s most commonly grown in the United States (specifically in Kansas, Nebraska, Oklahoma and Texas). According to Ohio State University, 40% of America’s wheat production is devoted to red winter wheat. Its red hue is derived from the pigmentation that’s found in the bran layer of the wheat berry. It is primarily used to create flour for baking purposes.

While oats are most often associated with horses, humans have come to rely on this nutritious grain. However, humans prefer them to be cleaned, toasted, hulled and cleaned again. The process produces oat groats (which still contain most of the original nutrients). Oat groats can be cooked and served as cereal or prepared in the same manner as rice. Use it as a side dish or add it to salads and even stuffing. When steamed and flattened with huge rollers, oat groats become regular rolled oats (also called old-fashioned oats). We associate rolled oats with oatmeal, oatmeal cookies and oat bran.

Wheat berries are whole kernels of wheat. Now widely available, wheat berries, which deliver a chewy texture and pleasant taste, are a good alternative to rice, couscous and pasta. You can also add the berries to soups, salads and multigrain bread.

This ancient grain – originally grown in Iran circa 6000 B.C. – only became known and grown in North America 100 years ago (it was primarily used as feed grain for animals). Spelt’s high nutrient content (it has more protein than wheat) and sweet, nutty flavor prompted health-conscious humans to add it to their diets. Flour made from spelt can be used in recipes that call for whole-grain flour. Pasta made from spelt is also available. Spelt grains can be added to side dishes, salads and cereals. 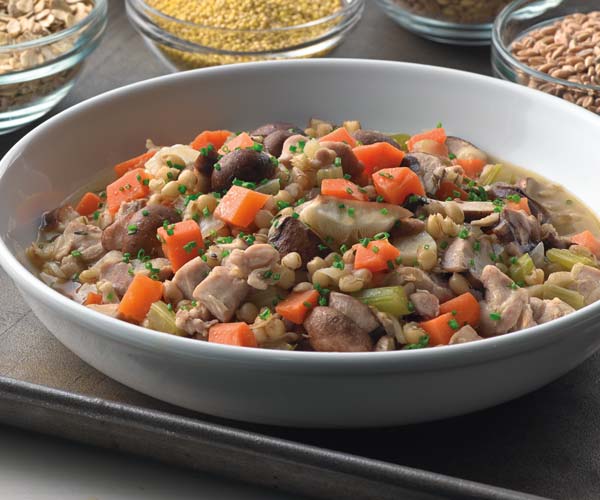