Because they are considered more beneficial to our native pollinators and birds – as well as non-native bees – there is a trend among avid gardeners to grow as many native annuals and perennials as possible. That’s all good, but how about considering native shrubs also?

I would add the argument that native shrubs create a sense of place rather than the ubiquitous Japanese barberry and euonymus, both of which have become invasive and are crowding out our native species. In my opinion, they should be banished from our gardens and no longer sold in nurseries. One recent report claims that only 4% of the woody plants sold in the nursery industry are native.

Here are several of my favorite native shrubs: 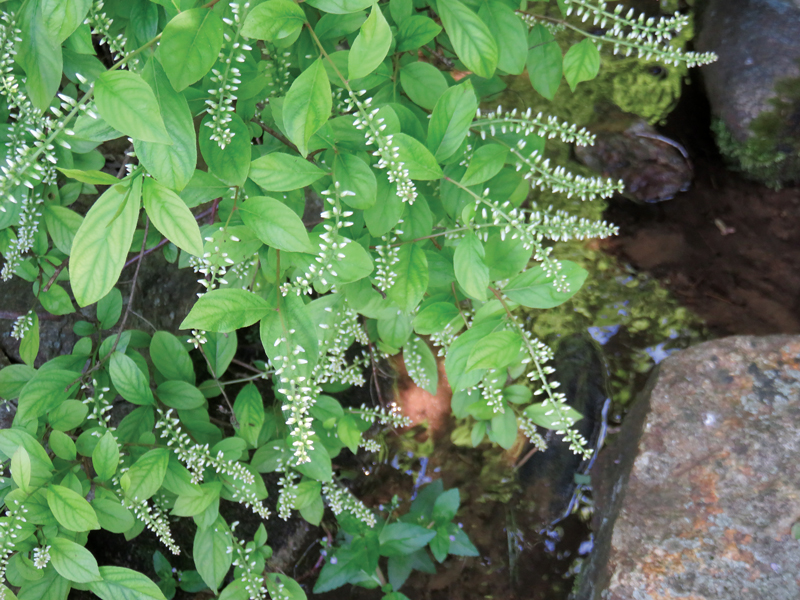 This shrub attracts attention twice in the gardening year. Typically growing 3- to 4-feet high, it is a broad-spreading, deciduous shrub with arching branches. In late spring to early summer, it is completely covered with showy, tiny white flowers borne in cylindrical, drooping racemes (3-6 inches long). The fragrant flowers attract butterflies and other pollinators. 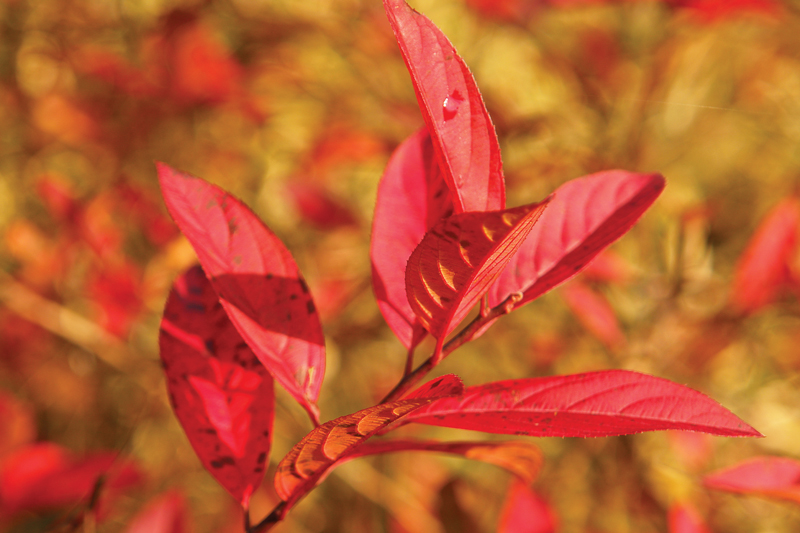 Oval, dark-green leaves turn a stunning deep and glossy burgundy in autumn. There is a long period of fall color well into November, and the leaves often persist on the plants until early winter.
Virginia sweetspire is a versatile shrub. It will grow in sun or shade and can be used as a single specimen or massed in a shrub border or foundation. It is a good choice for wet locations such as low spots or pond and stream margins. It naturalizes well because of its suckering habit and has no pest or disease problems 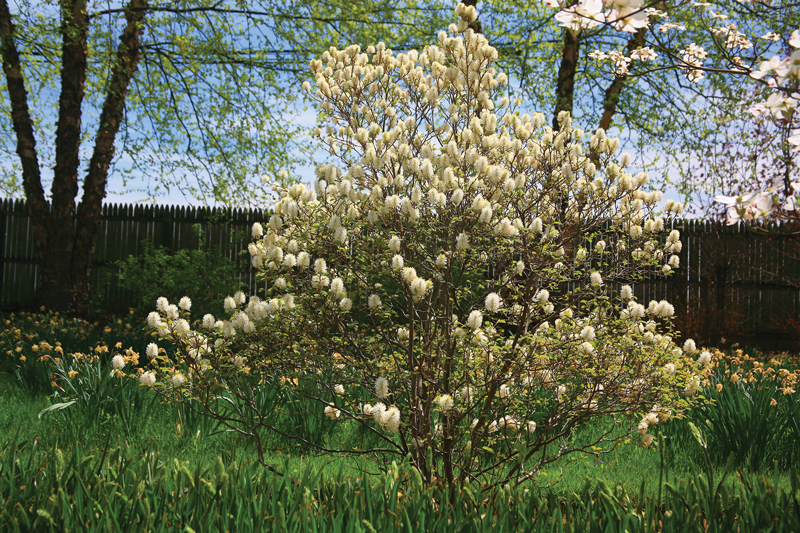 This underused shrub is related to the more familiar witch hazels and also has fragrant flowers – but they are 2-inch-long bottlebrush-like spikes that appear in late April, before the leaves emerge. The fragrance has been described as being like clover honey.

The leaves, which are free of pests and diseases during the growing season, turn vibrant shades of yellow, orange and red on the same plant in the fall. My experience is that the shrub displays its fall color late, after most plants have shed their foliage. 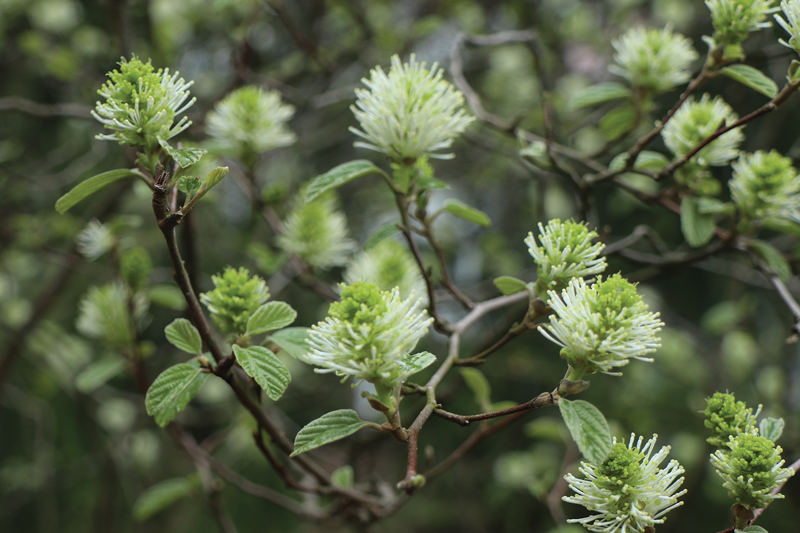 Fothergilla is native to moist, lowland coastal areas in the southeastern states. It is compact and slow-growing to 3-feet tall and wide. Situate this trouble-free plant in full sun or part shade. It makes a nice accent plant or can be used for mass planting. It will perform best in well-drained, moist, rich soil. ‘Mount Airy’, a cultivar, is more vigorous and upright in growth habit and is said to have more abundant flowers and brilliant fall color. 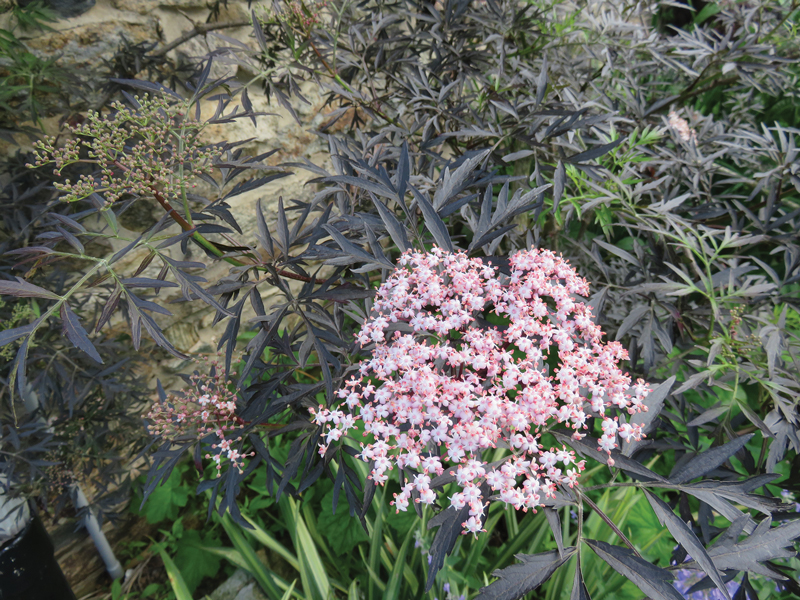 Elderberry is native from Nova Scotia to Florida and Texas and is often seen in rich, moist soil along roadsides or the edge of meadows. But, it also makes a great addition to a large border or for naturalizing. Large, flat-topped white flowers cover the shrub in late June into July in full sun or part shade.

By August and September, it is covered with huge clusters of purple-black fruit, which are great for jellies, pies and very easy wine-making. (You can make elderberry flower fritters, as well; online recipes are plentiful). At least 37 species of birds relish the fruit, including grosbeaks, brown thrashers, mockingbirds, eastern bluebirds, catbirds and woodpeckers. It also hosts the splendid cecropia moth. Because it can reach 8 feet, I suggest cutting it back regularly to keep it dense and provide showier fruit display.

Several cultivars are available for garden use: ‘Adams’ and ‘York’ for their larger fruit; ‘Aurea’ for its golden leaves that hold color; ‘Laciniata’, which has deeply cut leaves; and ‘Variegata’ with creamy white-yellow outlines on the leaves. You might also find black-foliaged selections like ‘Black Beauty’ and ‘Black Lace’. These are cultivars of the European S. nigra with alluring foliage but not edible fruit. 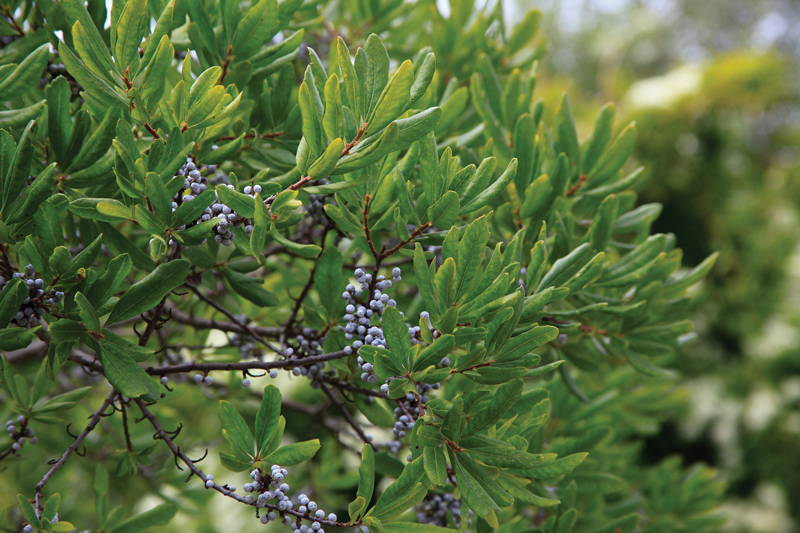 Generally listed as Myrica pensylvanica, this native has a new Latin name, Morella pensylvanica. Found from Nova Scotia to Florida, this one prefers sandy, acidic, dry and infertile sites like beach and seaside areas. Thus, it is useful in hopelessly difficult places like the edge of a parking lot where it tolerates salt spray. It is an upright rounded suckering shrub with lustrous, leathery green foliage that will grow in full sun to partial shade. It fixes atmospheric nitrogen in the soil.

The April flowers are not showy, but by the end of summer, the female plants are covered with clusters of gray, spherical, waxy aromatic fruit, which often persists throughout the winter. Many birds eat the fruits, including woodpeckers and meadowlarks. If you get to them first, you can always boil the berries to extract the wax and make bayberry candles, soap or sealing wax.

Why isn’t this versatile and adaptable plant used more often in our gardens? One likely reason is that it is difficult to find in nurseries (one should buy regionally-grown container grown plants to ensure heat and cold tolerance). Use it for screening, naturalizing or in the mixed border. 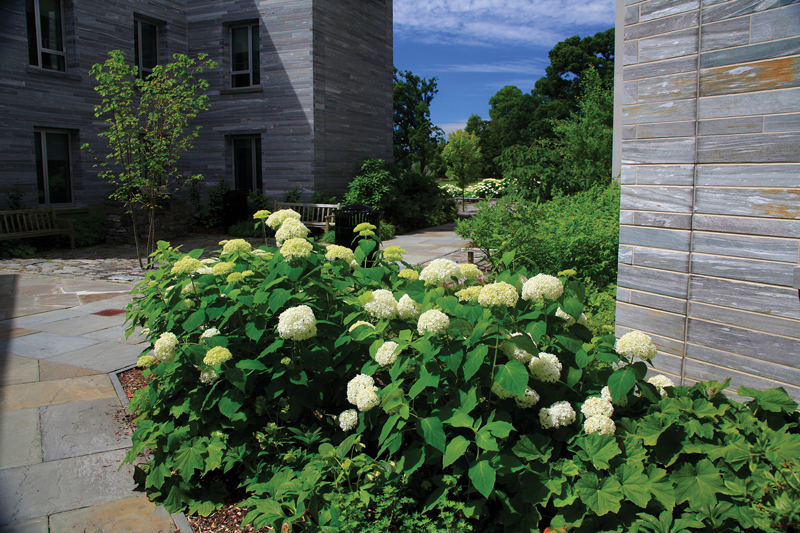 It seems everyone loves hydrangeas, particularly the dramatic colorful ones that are often greenhouse-grown container plants with flowers that are sometimes globes, sometimes discs in colors that range from intense pink to nearly pure blue. Widely planted is the majestic oak-leaved hydrangea, Hydrangea quercifolia, with its huge white flowers and red fall foliage color. There is even a climbing hydrangea, H. petiolaris.
Less familiar is the eastern woodland native, H. arborescens, sometimes called the smooth hydrangea. It is a perfect choice for moist, humus-rich soil at the edge of woods or on the north side of the house, where it has relief from midday sun.

This 3- to 5-foot hydrangea flowers on new wood, meaning it can be cut back in late winter to encourage larger flower heads. I recommend the cultivar ‘Annabelle’ because its larger mop-head flowers develop in early summer in a progression of icy greens, maturing to pure white and then, in late summer, darkening to a rich avocado. Thus, a spectacular show in the garden for several months from an easily grown shrub. There is no fall foliage color. 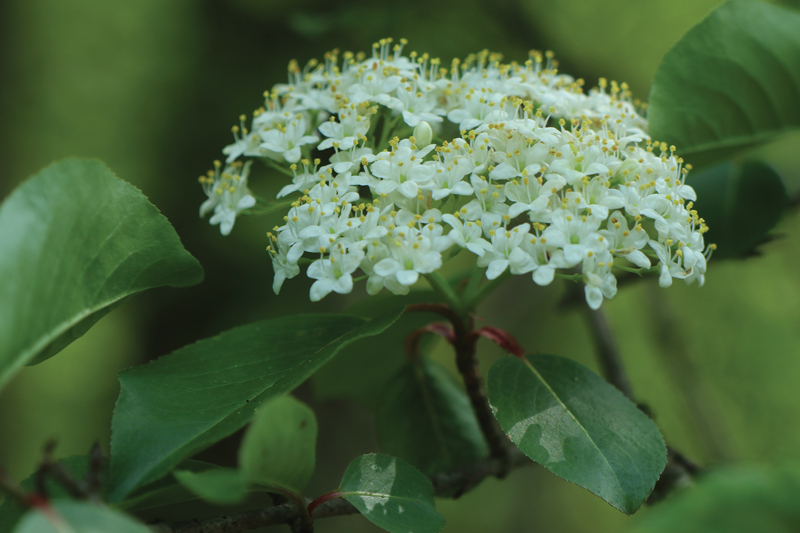 This tough small tree (up to 15 feet) is also hard to find in nurseries but is definitely worthy of landscape use. The small oval leaves look similar to those of cherry trees, which accounts for its Latin name. It will tolerate full sun to heavy woodland shade but will flower best with at least a half day of sunlight.
The flowers are flat-topped and white in May but are not fragrant like its cousins, the viburnums. They are followed by blue-black edible fruits, which can be used for jelly, but the birds will likely get to them first. The fall color is usually a terrific glistening purple-red. The tree displays distinctive pebbled bark. It can also be grown as a multi-stemmed shrub. 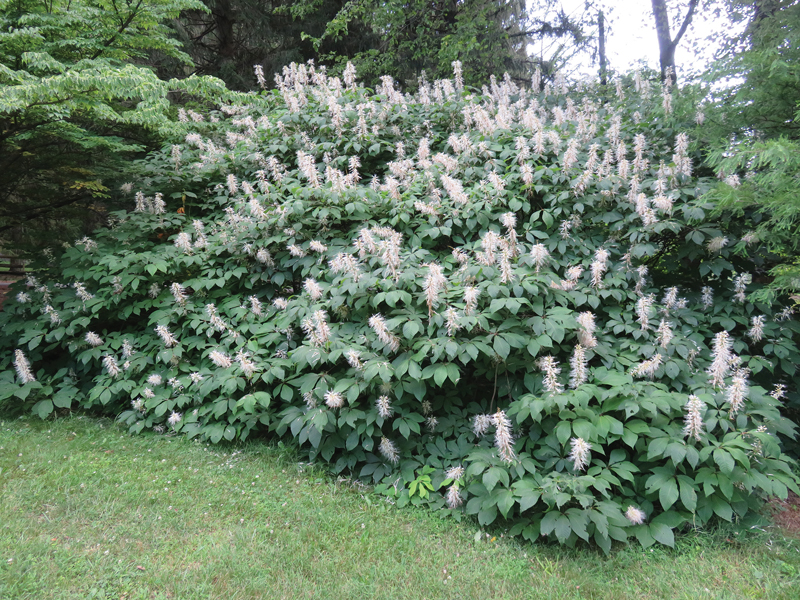 First noted by the famous plant explorer William Bartram during his travels in the southeastern states, it is reliably winter hardy in Lancaster County. This is one of the best flowering shrubs for shade. It is dense and mounded, 8- to 10-feet high with equal spread in part to full shade. It prefers rich, moist, loamy soil and will not tolerate dry soil. 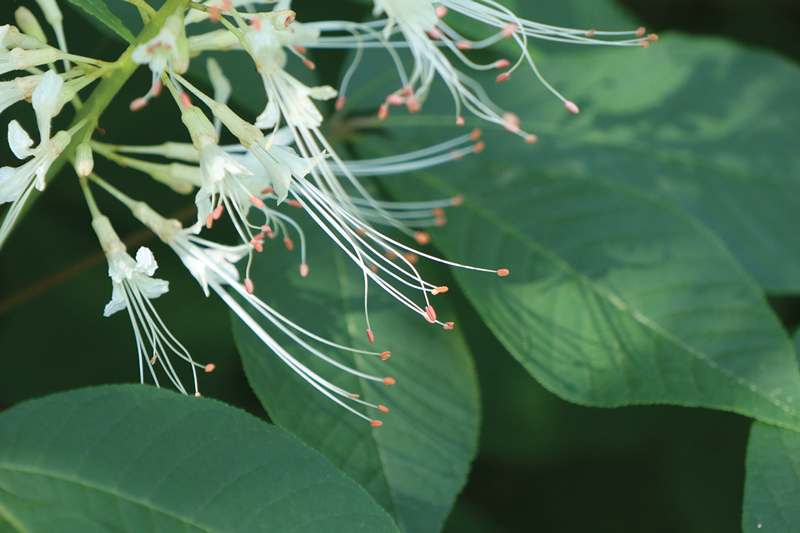 The large palm-shaped leaves support erect, very showy cylindrical panicles (to 12 inches) of tubular white flowers with conspicuous red anthers. This July bloom in the shade is spectacular. Flowers give way to glossy inedible (actually toxic) buckeyes. The foliage turns yellow in autumn and quickly drops. I particularly like that it does not have “bare knees” – like so many tall shrubs – because of its suckering habit. It is an ideal choice for large-scale understory plantings. It is not susceptible to the foliar diseases one usually associates with the buckeye trees. It attracts hummingbirds and eastern swallowtail butterflies. Deer do not touch it.