Inspired by European bistros, C’est La Vie makes its home in the heart of Downtown Lancaster – across the alley ...Read More

Bistro-style Dining in Downtown Lancaster
Valentine’s has always been a popular day to become engaged and even married. In fact, Thanksgiving through Valentine’s is referred ...Read More

Love!
Valentine’s Day is all about chocolate. But what happens if your significant other dislikes the “most popular sweet treat” in ...Read More

Another changing of the seasons is upon us, and this one is perhaps my favorite. Yes, the daylight hours grow shorter and the clock is set back an hour, but the weather is oh, so sweet. Fall also brings with it a craving for hearty, comfort food, making it the perfect time to pull out your Dutch oven.

How did the Dutch oven get its name? Three theories persist. In the early 1700s, brass was the metal of choice in creating cookware. However, it was expensive. An English businessman by the name of Abraham Darby learned that the Dutch had developed a more cost-effective method by using sand molds for the casting process. Curious, he traveled to Holland to check it out. Returning to England, he experimented with the “Dutch method” and added yet another cost-saving element by substituting cast iron for brass. The alterations enabled Darby to create cookware for the masses. He patented his design in 1707. 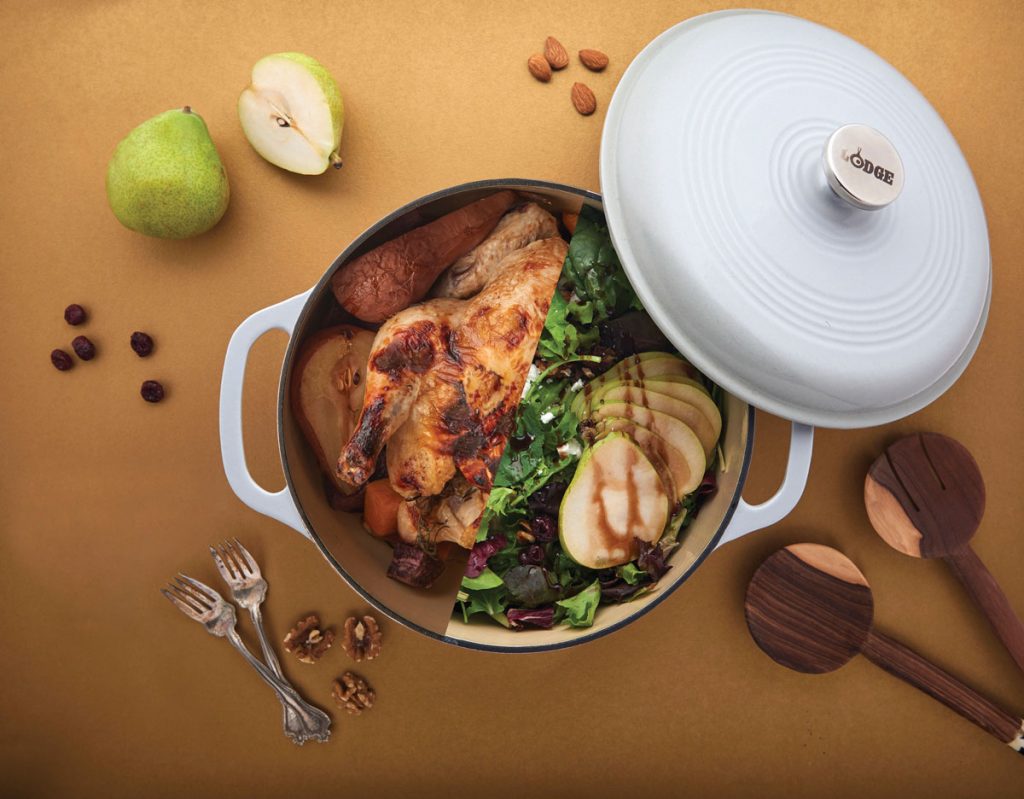 Another theory relates to the Dutch peddlers who sold the wildly popular cooking device door-to-door.

Yet, another curious theory has to do with Pennsylvania. It seems the German settlers relied heavily on their cast-iron cookers. Pennsylvania German … Pennsylvania Dutch. You get the picture. I think I like the third theory the best.

Of course, good old Yankee ingenuity prompted an evolution in the design of the Dutch oven – some say courtesy of Paul Revere. The American version’s legs grew longer (mostly because they were used in open fires), the pot shallower, and the flat lid was designed so that hot coals could be placed atop it. 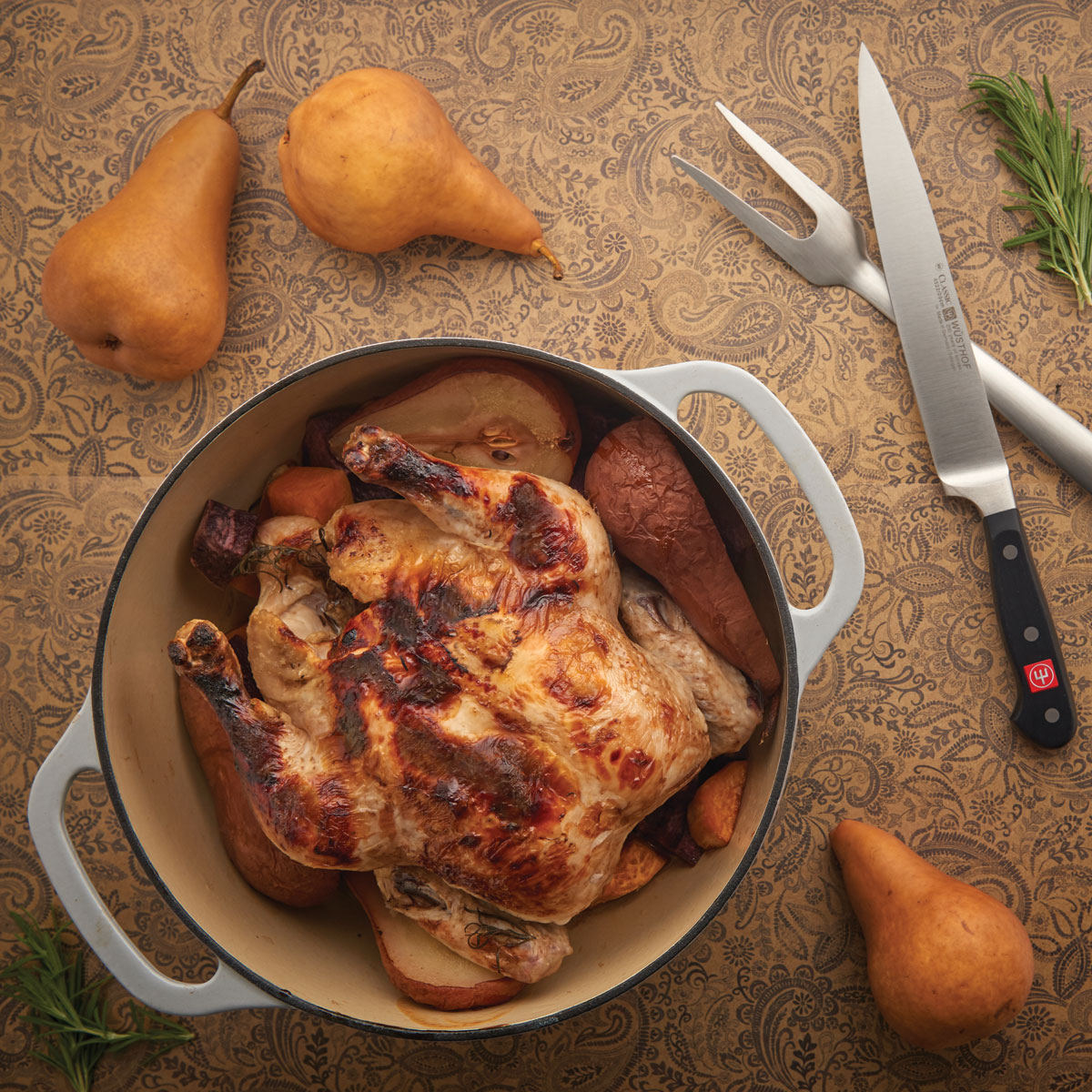 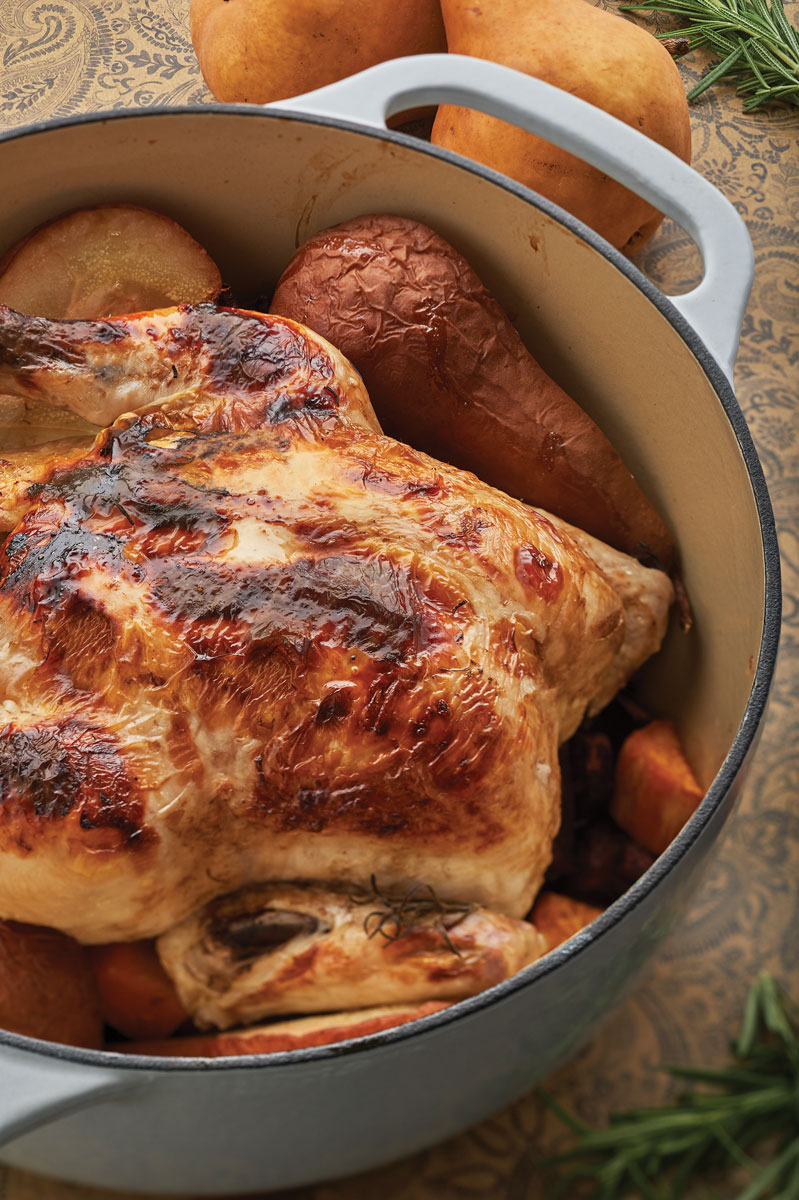 Bell & Evans 4-pound organic chicken with a fig glaze, roasted with rosemary, Bosc pears, orange and purple sweet potatoes drizzled with Tuscan olive oil from Olio Olive Oils & Balsamics in Lititz. Elevating the chicken high in the Dutch oven provides air circulation for an even roast. Cook at 350 degrees for about 20 minutes per pound.

In 18th- and 19th-century America, the cooking vessels were so “revered” that they were passed on to the next generation via wills. In fact, George Washington’s mother decreed in her will that her Dutch ovens and other cookware should be evenly divided between her grandson and granddaughter.

Dutch ovens are even part of American folklore. The Lewis & Clark expedition toted Dutch ovens into the great unknown. Food was cooked in Dutch ovens during the California gold rush and the construction of the transcontinental railroad. Chuckwagons became synonymous with Dutch ovens. Watch any cowboy movie or TV show, and you’ll inevitably spy a Dutch oven.

During the 20th century, housewives discovered their allure – the now-legless Dutch ovens allowed them to clean the house and watch over their children while dinner took care of itself. Yes, the Dutch oven probably qualifies as the original slow cooker. The versatile cooker can be used for stewing, slow roasting, baking, marinating, braising and even deep frying. As a bonus, they are indestructible. 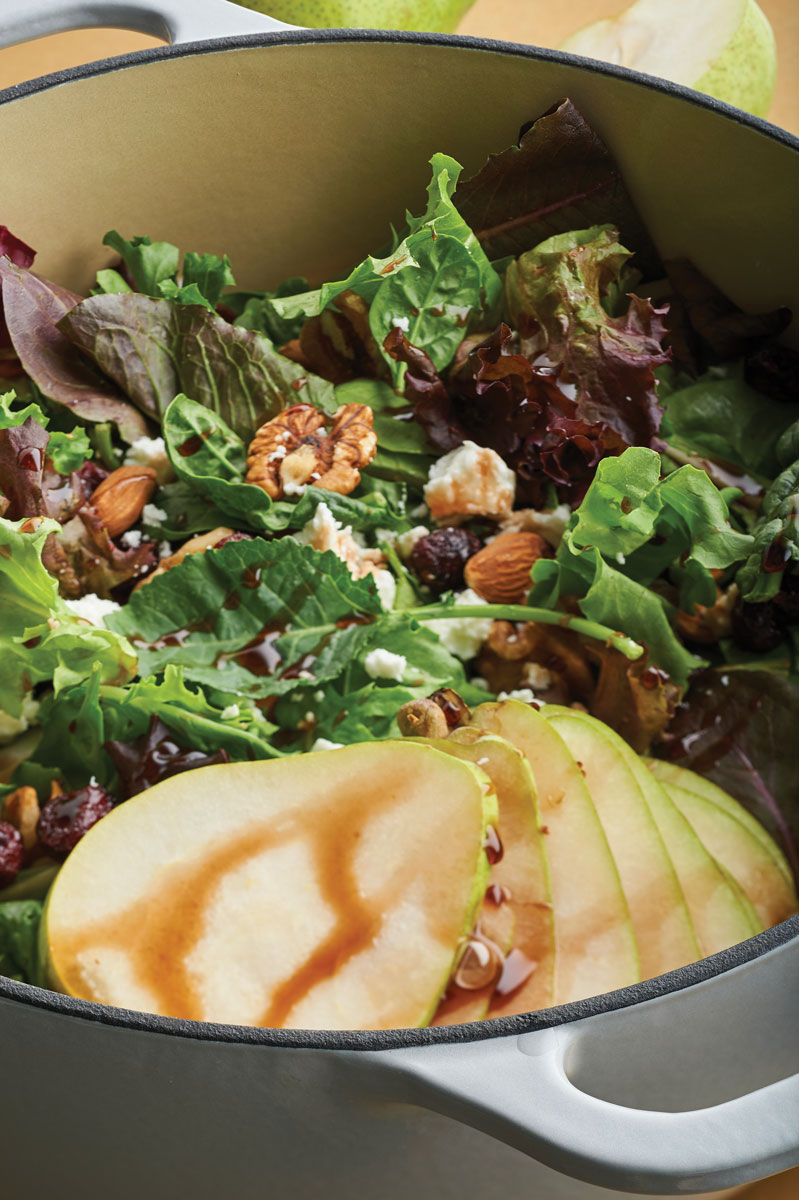 Enamel cast iron offers many benefits (including easy to clean), whether you’re cooking on gas, electric or induction ranges. Thick, dense cast-iron sides uniformly heat food for everything from baking sourdough bread in the oven to making popcorn on the stove.

Bare cast iron is ideal for outdoor use – commonly over a fire with a tripod. Some feature cast-iron lids that harken back to colonial times, as hot coals can be placed atop them, allowing food to be heated from below and above.

While heavy Dutch ovens hold temperature well – given the energy required to change the temperature of dense iron – there’s an often overlooked, yet excellent use for Dutch ovens: serving cold foods. On a hot summer day, a Dutch oven can keep fruit or salad chilled to perfection. By chilling a Dutch oven in the refrigerator before serving, your food will remain cool and crisp on a warm evening. 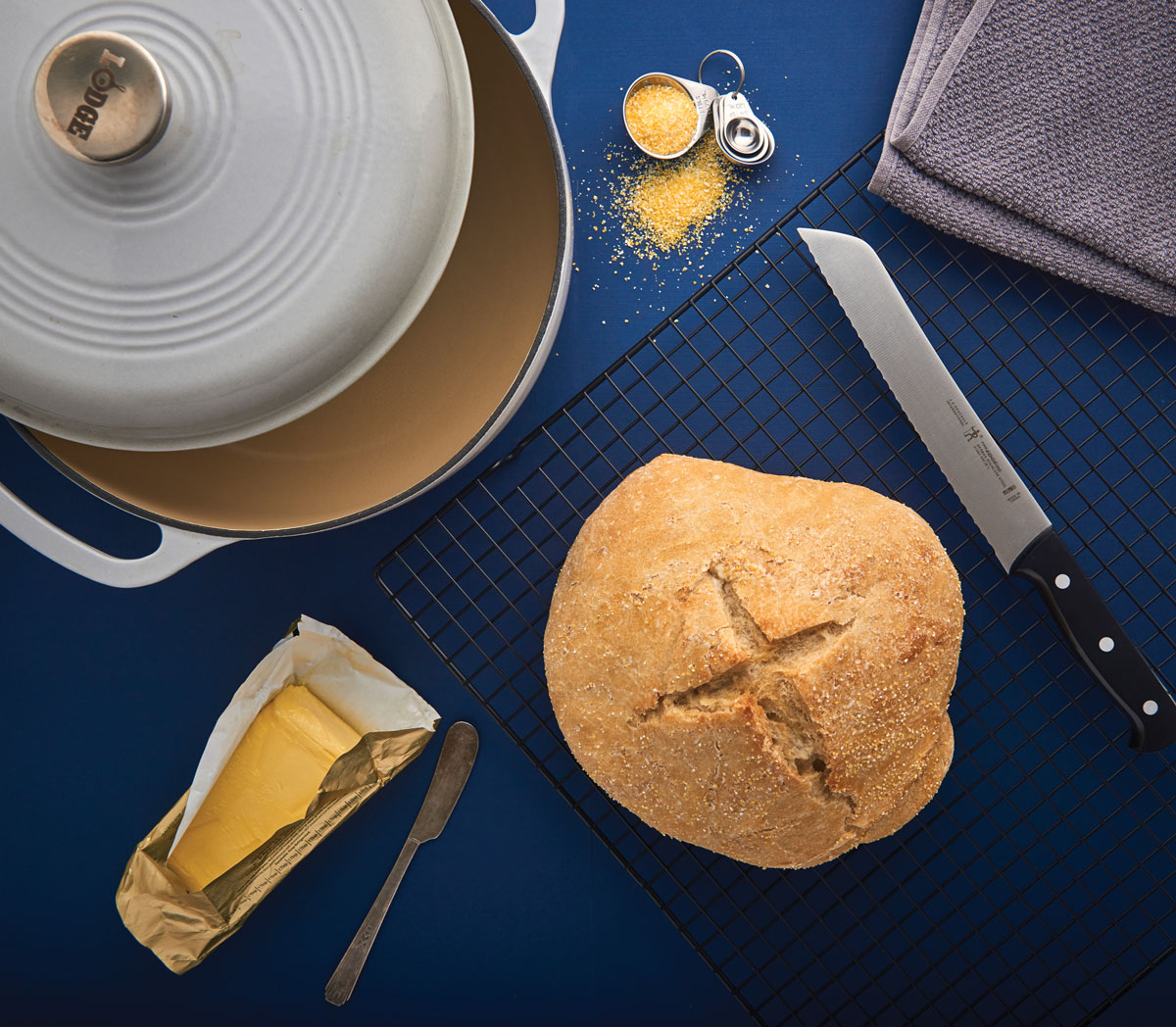 Fresh, homemade sourdough bread topped with cornmeal and a side of Kerrygold Pure Irish Butter. A Dutch oven’s thick cast iron sides deliver an even bake all the way through, here at 450 degrees.

If you’re interested in adding a Dutch oven to your arsenal, you certainly have options: round or oval, casserole or cocotte, deep or shallow. Capacity varies by volume measured in quart sizes, so consider the number of portions you plan to prepare when making your selection. A 4-quart Dutch oven is large enough to prepare a meal for one or two people. A 6-quart Dutch oven will offer more utility.

Bear in mind that with larger sizes, weight can be, well, a bear. For example, a 6-quart Dutch oven can weigh between 10-15 pounds empty. On the plus side, meals can be served out of the oven or from the stovetop directly to the table, making for easy cleanup.

According to Consumer Reports (November 2018), the top Dutch ovens are (in alphabetical order): Ayesha Curry, Le Creuset’s Signature, Lodge, Staub’s Cocotte and Vremi. Le Creuset, which Consumer Reports ranks No. 1, and Staub are two options from France. Le Creuset, which was founded in 1925, produces some of the most renowned cast iron in the world. (Locally, it’s available at William Sonoma.) While a variety of colors are available, orange continues to be their signature hue, resembling glowing iron in the sand-casting process that is still used today. Le Creuset offers a lifetime warranty, and its pieces are heirloom quality. 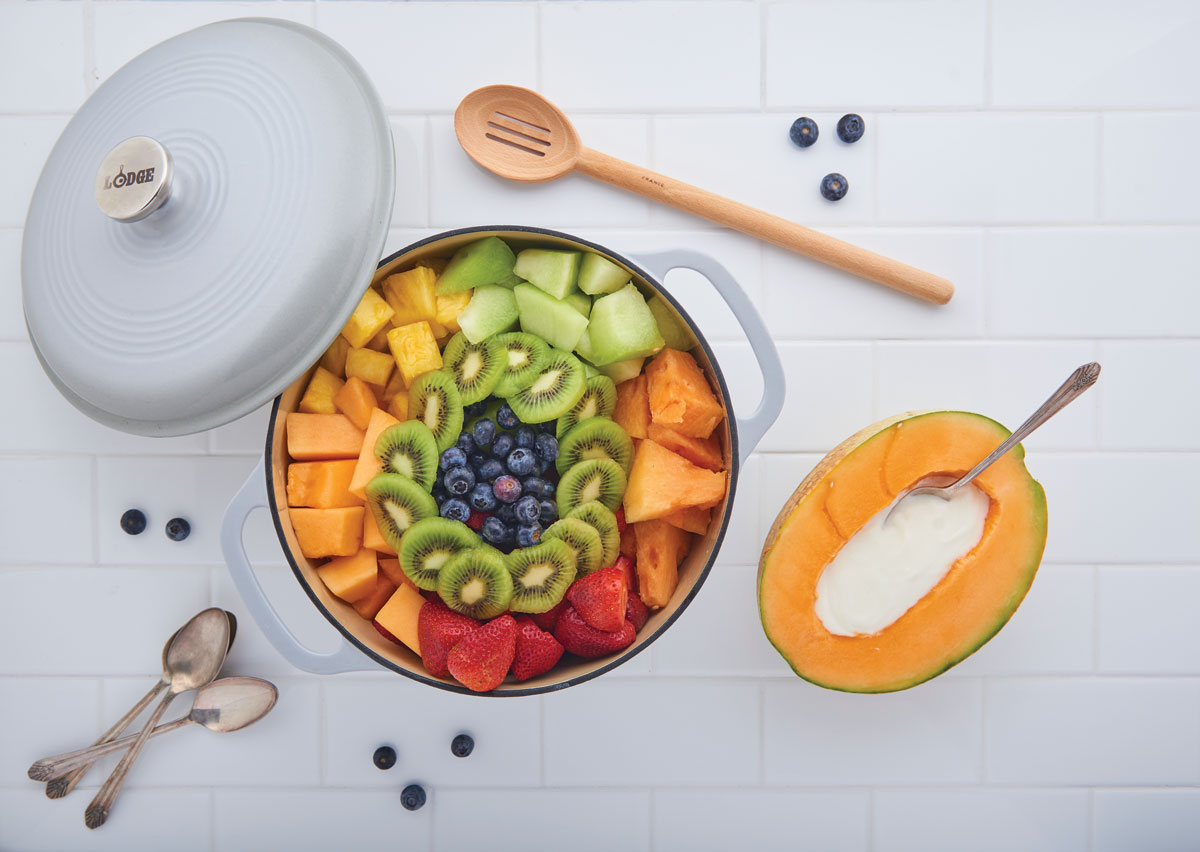 Prices for Dutch ovens vary widely – you can expect to pay anywhere from $45 to well over $300. Color can be a great way to save when purchasing any enameled cast iron. For example, Le Creuset offers sales at its outlet stores based on color family. Color-based discounts can be found online, too.

While it was tempting to go for a Le Creuset, I did my research and opted for a Lodge 6-quart Dutch oven in gray enamel. While the color isn’t exciting, the savings made up for it – half price compared to its brighter brethren.

For my purposes, surpassing the value of a Dutch oven from Lodge is practically impossible. Lodge offers superb quality and comparable utility. Of the 6,865 Amazon reviews for Lodge’s enamel Dutch oven, 79% of them are five-star ratings. Similar to competitors with enameled interiors, the lip of the cast iron is left bare to avoid chipping. (The enamel on mine is in great shape after two years of frequent use.) Lodge’s handles and knobs are oven-safe up to 500 degrees. Another plus is Lodge’s bare cast-iron braising lid for skillets is identical in size to the lid of their 7-quart Dutch oven. The only downside is that while Lodge is based in South Pittsburg, Tennessee, its Dutch ovens are made in China. 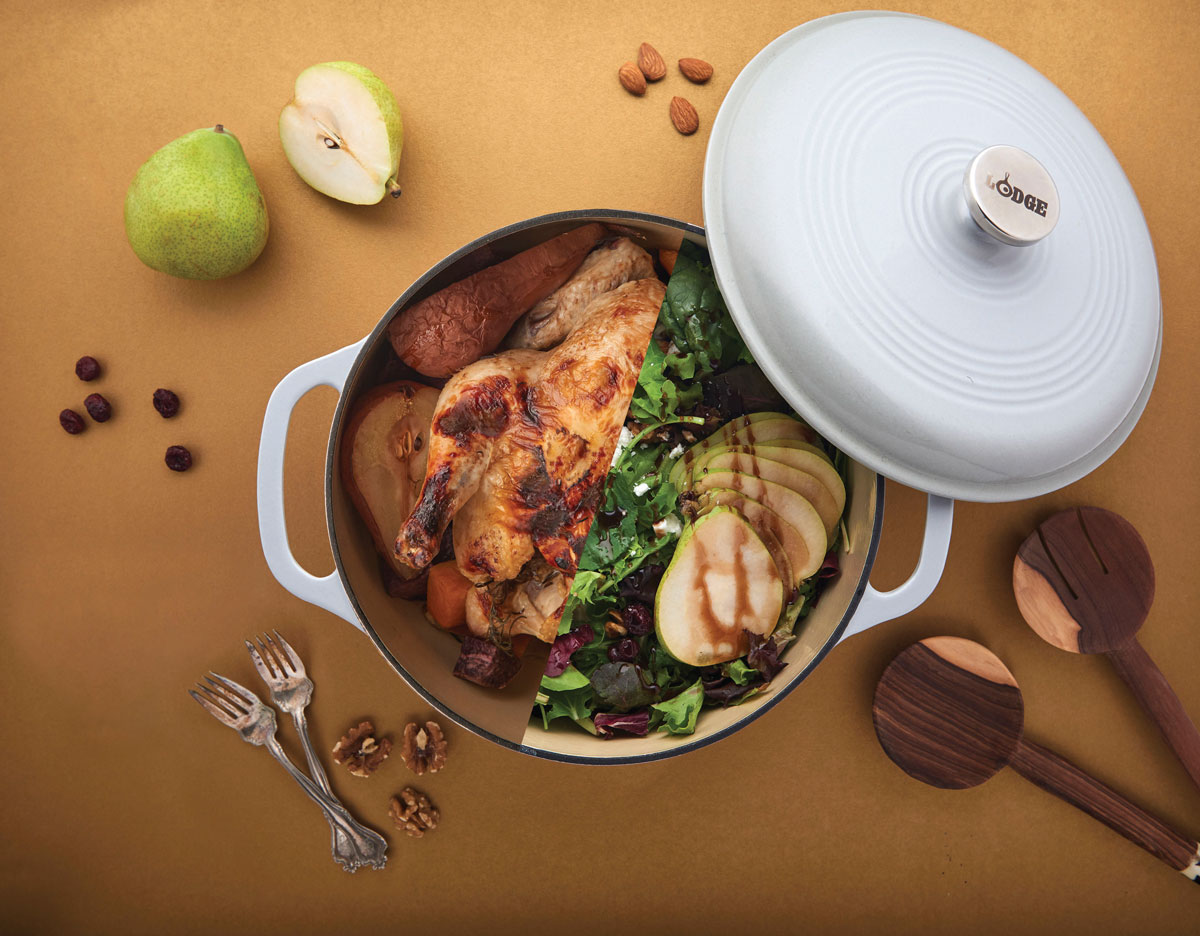