Dwight Graybill of Cocalico Builders views the basement as a hidden treasure. “Finishing or remodeling a basement is a great way to utilize square footage that often goes to waste and expand your living and entertaining space,” he says. “Plus, it does wonders for the equity in your home.”

Dwight’s clients wanted to update the lower level of their 25-year-old home. The basement had been finished to the extent that the block walls were painted and the floor carpeted. A brick wall provided the backdrop for a wood-burning stove. “It was really outdated,” the homeowner says, and with grandchildren expanding the size of the family, they needed a place where everyone could gather.

So, they turned to Dwight. “They showed me pictures of things they liked, and we went from there,” he says of the project.

The space was divided into five zones that were ultimately dedicated to a bar, two game areas, a media room and a small dining area. An existing bathroom was also remodeled. The game plan called for raising the ceilings as high as possible in order to create bulkheads through which ductwork, mechanicals and electrical lines travel. The bulkheads also help to visually demarcate each area. Tray ceilings distinguish the bar and the billiards room.

Drywall now encloses the entire space. “We rounded the edges,” Dwight points out. “I think it helps to soften up smaller spaces.”

The carpet was replaced with a vinyl interlock floating floor that is a dead ringer for hardwood. “It’s almost indestructible,” Dwight reports. “The homeowners were a little doubtful about its durability, so I took a hammer to it and nothing happened. It might be more durable than bamboo.”

The barnwood-inspired floor, with its hand-scraping and hit-or-miss markings, created a blueprint for the custom-built bar and moldings. Wanting the wood to match the mood of the floor, Dwight and his crew “aged” it with hammers, picks and chains before it was stained. “We wanted that wormy look,” he explains.  Honed granite complemented the aged look.

Tin covers the  tray ceilings in the bar and billiards room. “The homeowners wanted a specific color, so I took it to a local body shop and was able to get an exact match,” Dwight notes.

Lighting, no doubt, sets the space apart from a typical basement remodel. “Lighting is everywhere,” Dwight remarks, “and it’s all on dimmers. It’s gorgeous at night.” The homeowner especially likes the rope lighting that softly illuminates the crown molding.

Sound zones were also incorporated into the design. “Someone can be watching the television in the media area while music is on in the billiards area, and the TV is on in the bar without anything interfering with the other. It’s quite amazing,” says the homeowner.

The bar art is equally as amazing. “We had a lot of fun with that,” the homeowner reports. “My wife saw on Craigslist that a bar in Reading, which had closed in the 70s, was selling everything, so we went and came home with all kinds of stuff,” he says of the neon signs, vintage trays and coasters they purchased.
Space was also created to accommodate the homeowner’s three prized pinball machines.

As you might guess, the basement has morphed into more of a man cave. “I enjoy hanging out down here,” the homeowner admits. “But it’s great when the family gets together. We especially enjoy it in the fall and winter months.” 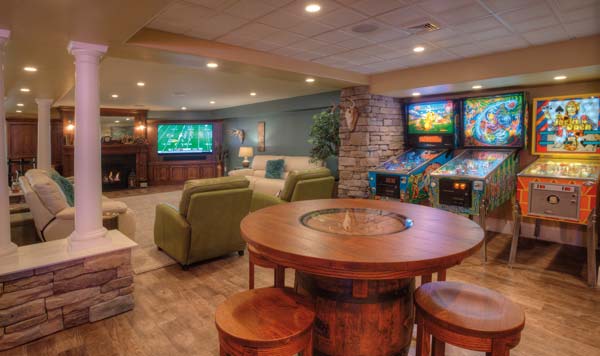 Wanting more space for family gatherings, the homeowners transformed their basement into living space that is perfect for relaxing or entertaining. Zones are dedicated to a media room (with fireplace and big-screen TV), a bar, a small dining alcove and two game areas.