It’s only appropriate that the Halloween-loving Schaeffer family lives in one of Columbia’s grand Victorian homes – many of the traditions that now define Halloween are rooted in the era in which their home was built. 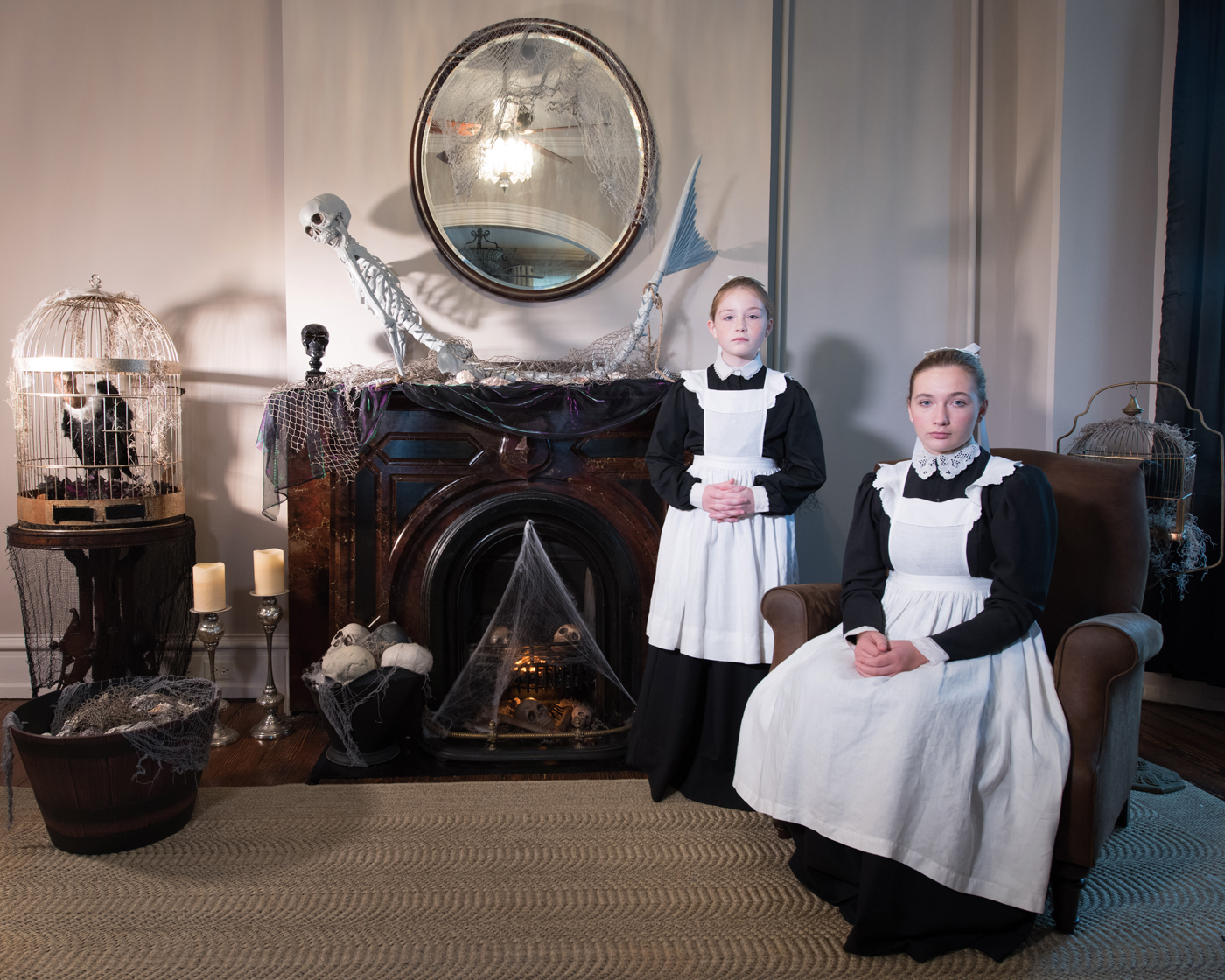 Reece and Riley Schaeffer pose in front of the fireplace that was hidden behind river rock and paneling. They are attired in dresses created by Janet Wood of Regalia Costumers. Reece and Riley are students in the Columbia Borough School District. They are also students at Paula’s School of Baton. Both will be participating in the Mardi Gras Halloween Parade.
Have you ever wondered why Victorians never smiled in photographs? There are several reasons. In the early years (late 1820s) of photography, exposure time could be as long as 15 minutes, thus making a smile impossible to maintain. Also, portraits were only taken for special occasions and therefore their formality required a more serious look. Broad smiles were also considered to be ill-mannered. Aesthetically, small mouths were in vogue – in fact, photographers told subjects to say “prune” in order to make their mouths look even smaller. As few people had “pearlie whites,” it was simply better to not smile.

Glen and Crystal Schaeffer were on the hunt for an old house. The search came to an end in 2000, when Crystal’s mother called to say she saw the perfect candidate on Chestnut Street in Columbia. “She was driving past and noticed the columns and then the For Sale sign,” Crystal recalls.

The house has a storied past. Dating to 1880, it was built for Emily Fitzgerald and her children following the death of her husband, a surgeon who practiced for a time in Alaska. Upon the family’s return to Columbia, Dr. Fitzgerald fell ill and died.

In 1920, the Brown family purchased the house. Over time, an apartment was added to the second floor. The Schaeffers also learned that rooms on the upper floors were once rented to railroad workers. 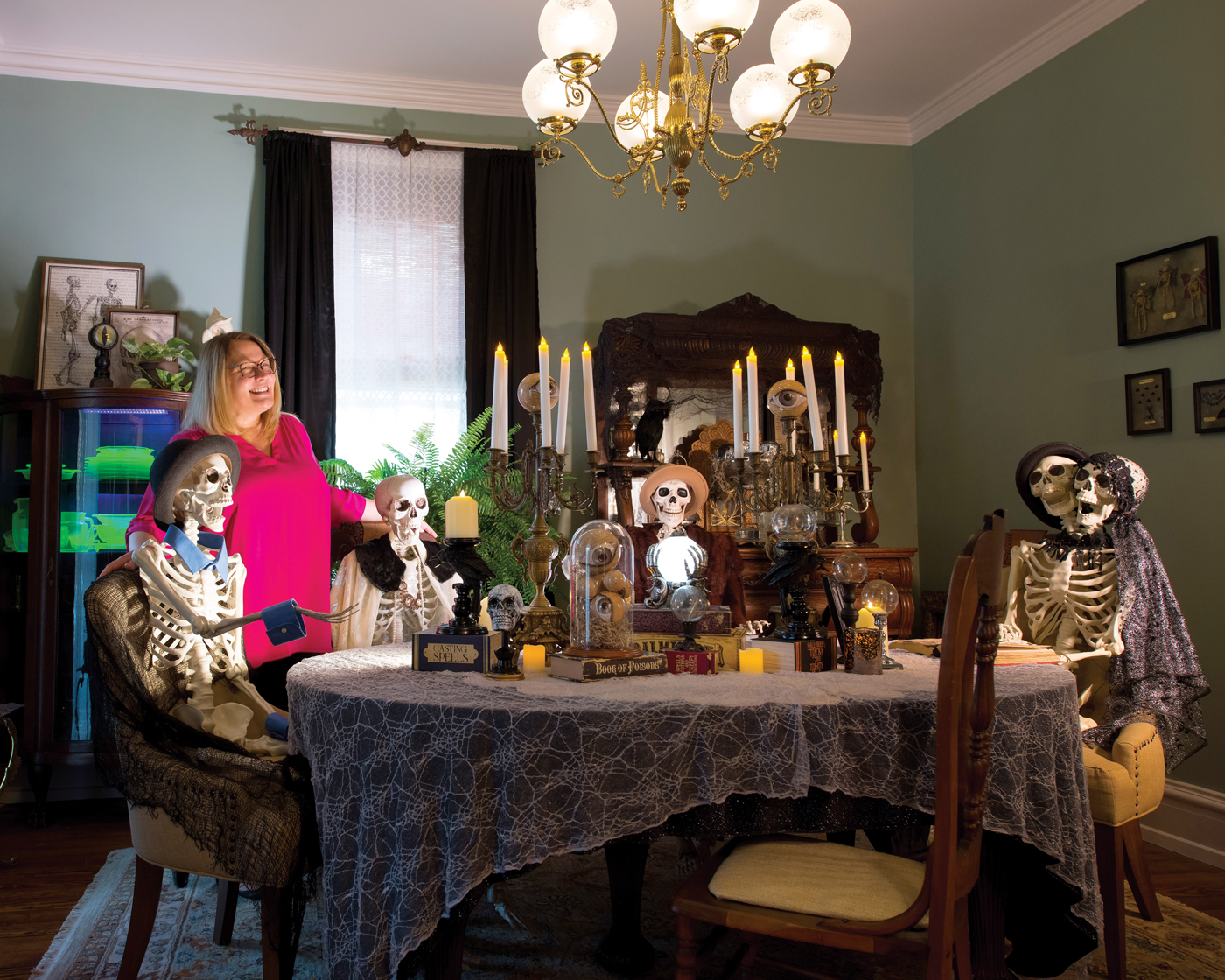 The house passed through several generations of the Brown family, with the last owner being Tybertus Brown, who died at the age of 91 in 2005. Even though she had moved, her obituary referenced her one-time residence in Columbia. According to neighbors, Mrs. Brown, who taught in the Columbia Borough School District and was a regular volunteer for Holy Trinity’s annual fasnacht sale, was such a meticulous  gardener that she was often seen using scissors to put the final touches on the mowed lawn. Legend also has it that she painted portions of the exterior of the house pink. “We were told it had to do with the arrival of a grandchild,” says Glen, who questioned the pink paint he uncovered when he was prepping the exterior for a new color scheme. 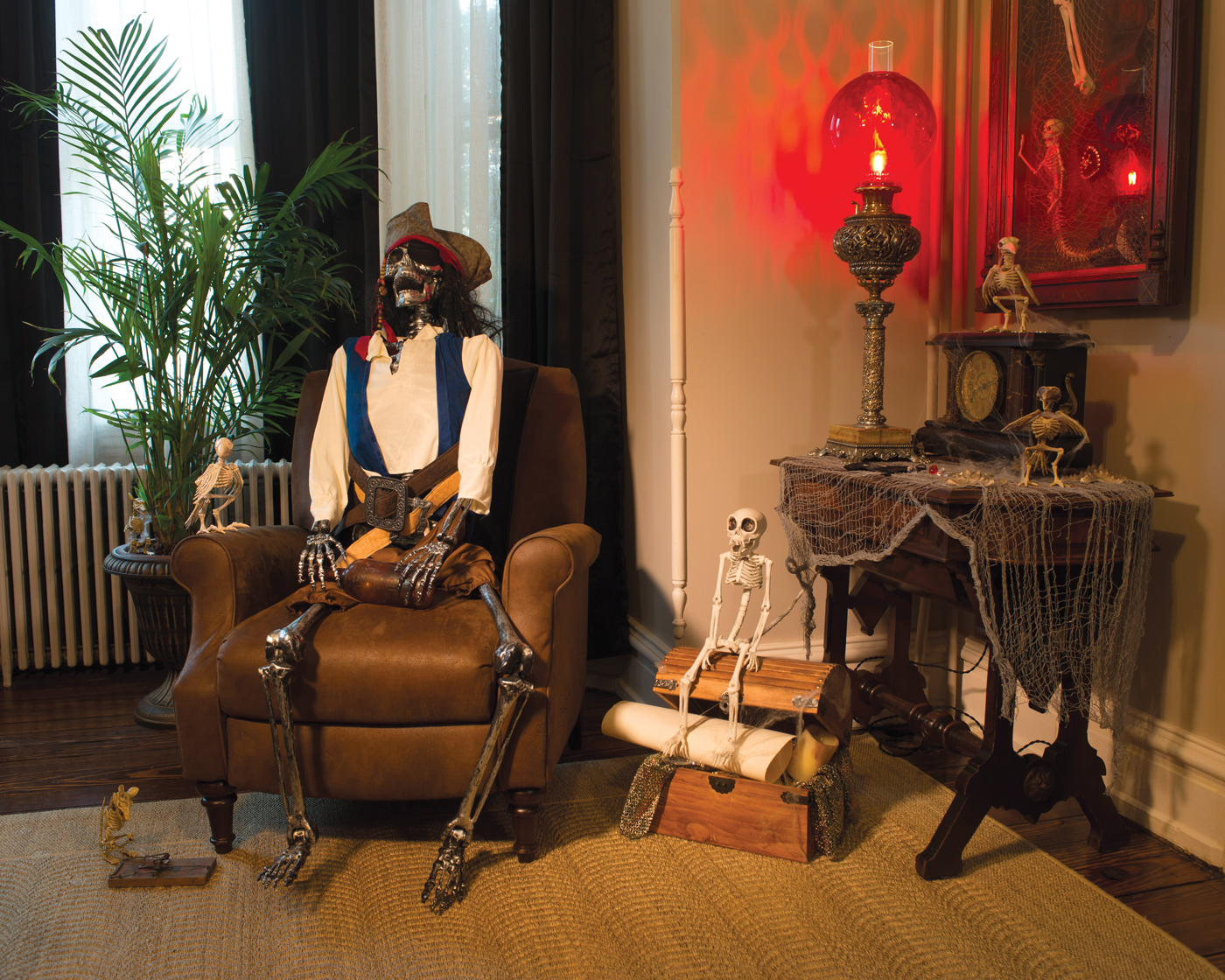 A skeleton dressed as a pirate and his friends welcomed guests to the sitting room. The red glass of the period globe lamp adds to the ambiance. At one time, kerosene oil was used to illuminate such lighting fixtures.

The Schaeffers toured the house and loved what they saw. “The bones were good, it just needed updating,” Crystal notes. The process began by addressing the mechanicals, with the house receiving a new HVAC system. It was completely rewired, as well.

Fortunately, Glen, who grew up in an old house in Coatesville, was able to carry out many of the projects, the first of which was eliminating the apartment and returning the house to a single-family residence. Then came the mundane projects such as removing layers of paint and what Crystal remembers as “lots of ’70s wallpaper.” He also removed a back staircase. The acoustic tile that covered the ceilings throughout was also removed. 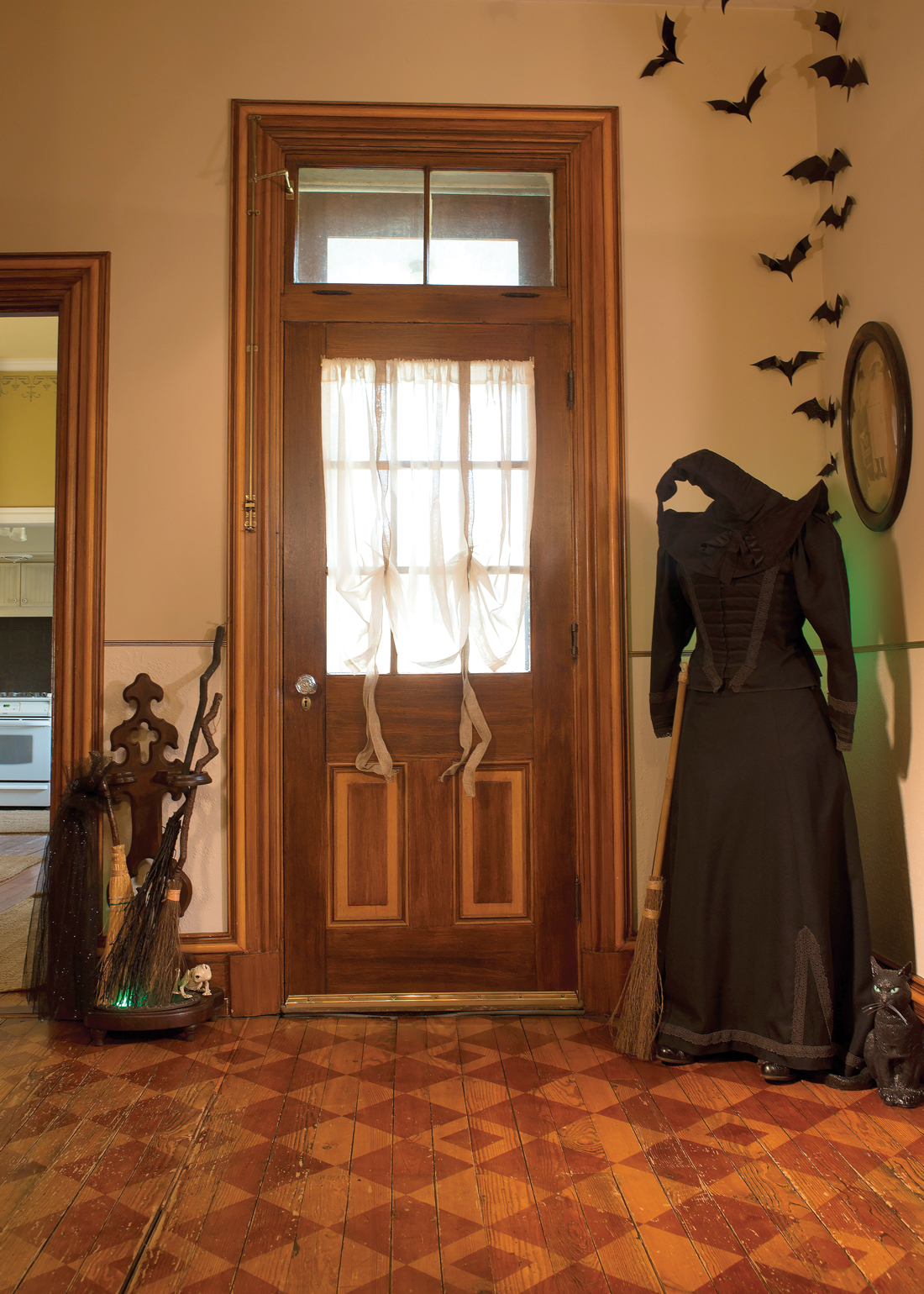 A witch’s dress borrowed from Janet Wood’s collection of costumes set the tone in the foyer that leads to rooms at the back of the house. Glen and Reece made the bats. The floor was a project that saw Glen create a stain that was applied in a stenciled diamond pattern over the original subfloor.

A mystery was solved in the sitting room with the help of Cle Berntheizel, whose Victorian-era home is a block away. Someone had covered the fireplace in river rock. “Cle came and looked at it and said, ‘I bet the original fireplace is under there.’” Then the three noticed the wall had some give to it and discovered paneling had been erected to eliminate the niche in which the fireplace sits. As Cle suspected, the original marble fireplace was still there. Better yet, it was in pristine condition. By removing the paneled wall, the room became a foot wider. “The room looked so much bigger,” Crystal notes.

Other projects included transforming the third floor into a dual-purpose media and craft room. The kitchen and bathrooms were remodeled, as well. 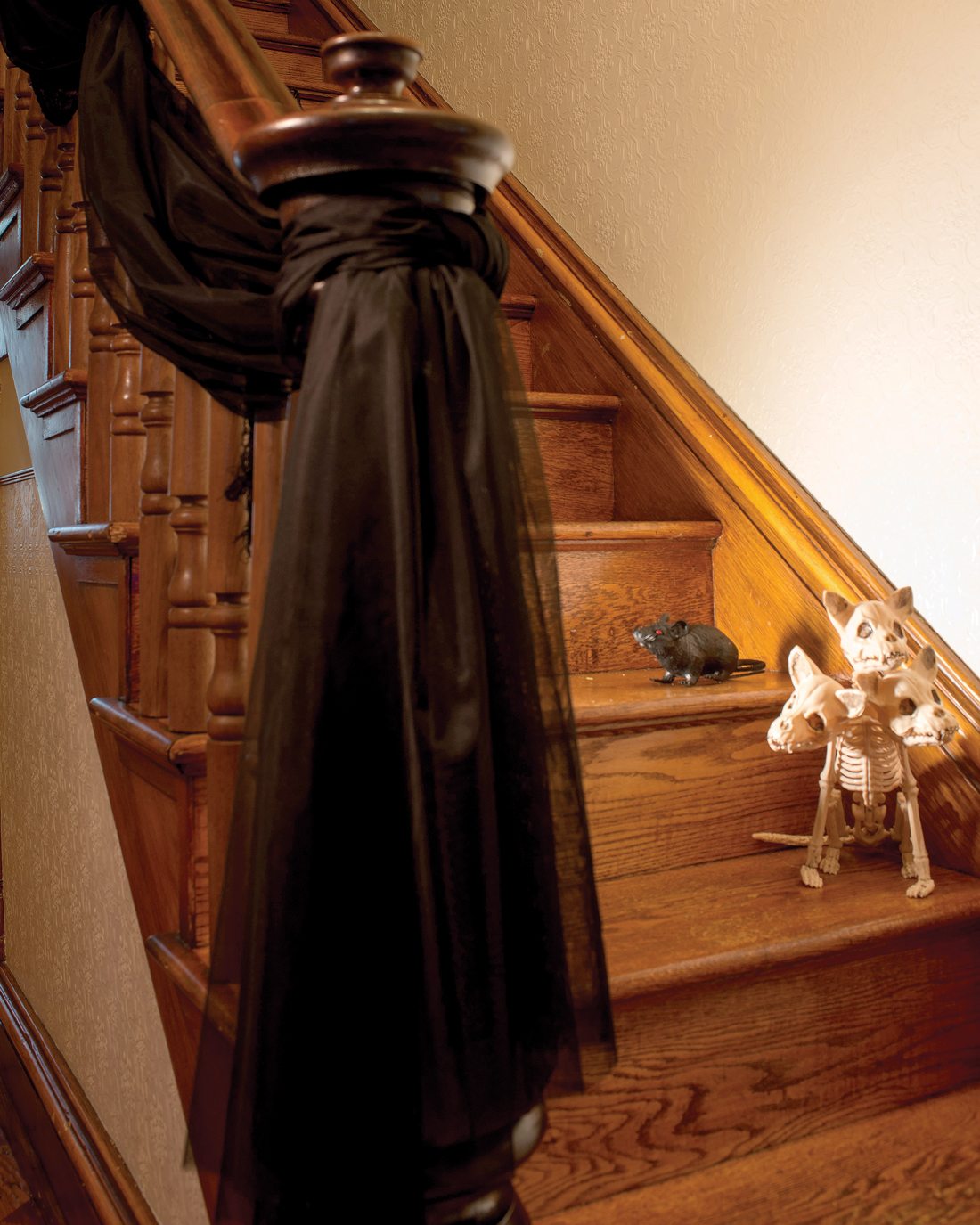 Glen also got creative in the foyer and hallway that leads to the back of the house. “The parquet floor was not in the best shape, so I took it down to the subfloor, put a finish on that and then created a darker finish and stenciled it over the subfloor to create a diamond pattern,” he explains. What was meant to be a stop-gap measure proved to be an eye-catching and enduring project. Glen also created a period stencil for the breakfast-room walls, with Crystal applying the gold-hued paint.

Furnishing the house became a labor of love. Glen notes that because of the high ceilings (10 feet), contemporary furniture looks out of scale, thus the need to mix in period pieces. Early on, the antiques shops in Adamstown became their Sunday destination. The prized breakaway bookcase in the parlor was scored at the legendary Brimfield Flea Market in Massachusetts. Auctions also provided them with finds. “You have to remember, back in 2000, the Internet was still new,” Glen says. “There weren’t online sources for furniture and auctions. Now, I can bid on something online and go and pick it up.” Crystal reports that Victorian Homes magazine became her bible. “One thing you quickly learn is that a Victorian is never done,” she notes. 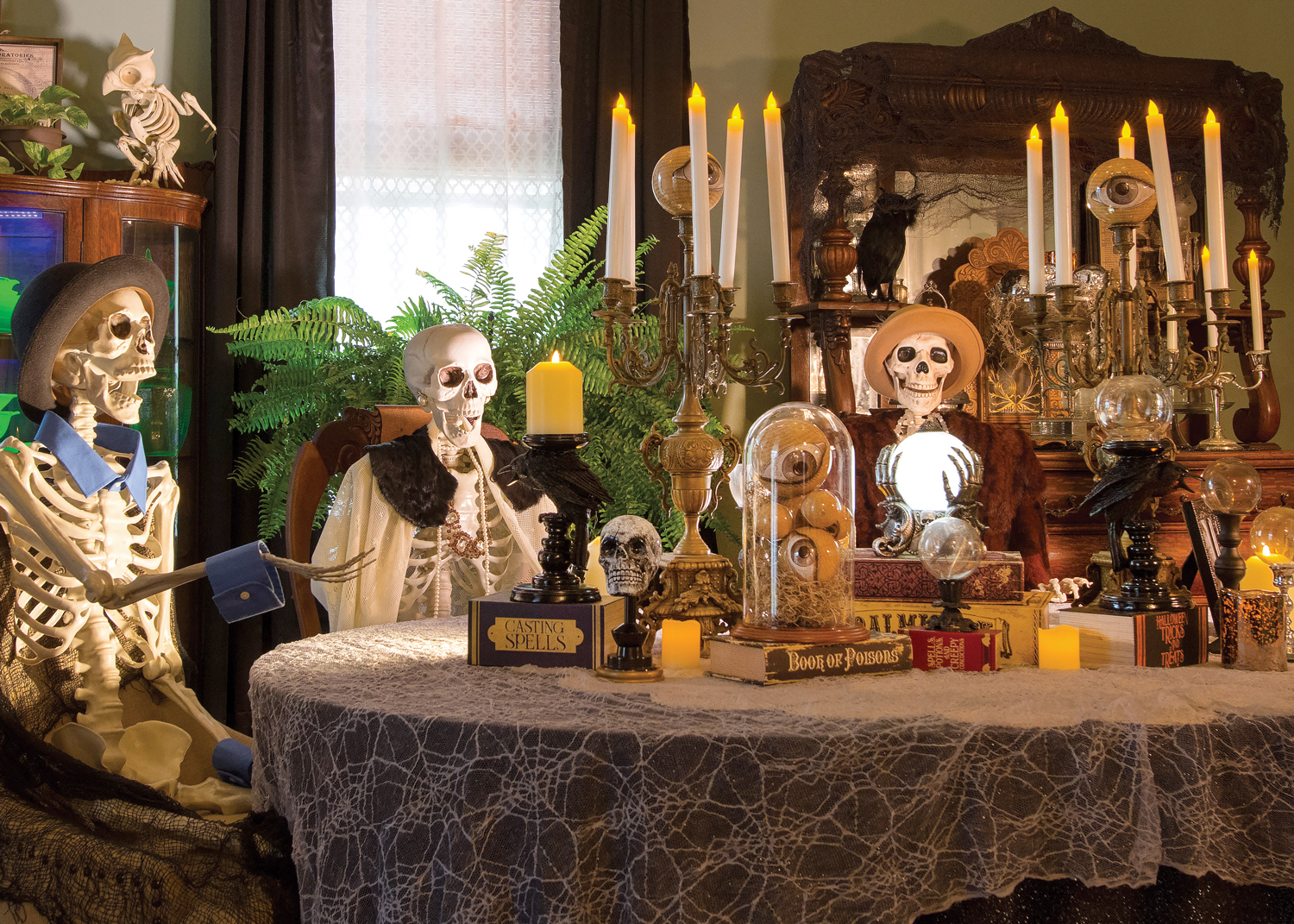 Being new to town – Crystal grew up in nearby Kinderhook – the Schaeffers wanted to get involved in Columbia happenings. They volunteered to take part in the Haunted Lantern tours. Working with artistic people like Janet Wood introduced the Schaeffers to another creative outlet – decorating for Halloween. “Halloween is just fun, there are no expectations,” Glen says of the creative and artistic direction they take to welcome trick-or-treaters to their home on October 31.

The decorations are a mix of vintage and new. For last year’s séance theme, Crystal put her skeletons – most purchased through Michaels – to optimal use. However, scary was the last word that came to mind when you entered the dining room. Instead, the Schaeffers definitely achieved what Crystal termed “whimsical and fun” with their theme.

“We are always looking for things,” Crystal notes. She also adds that she makes it her mission to shop the post-Halloween sales and considers the Oriental Trading Company (online) as a top source for anything Halloween. 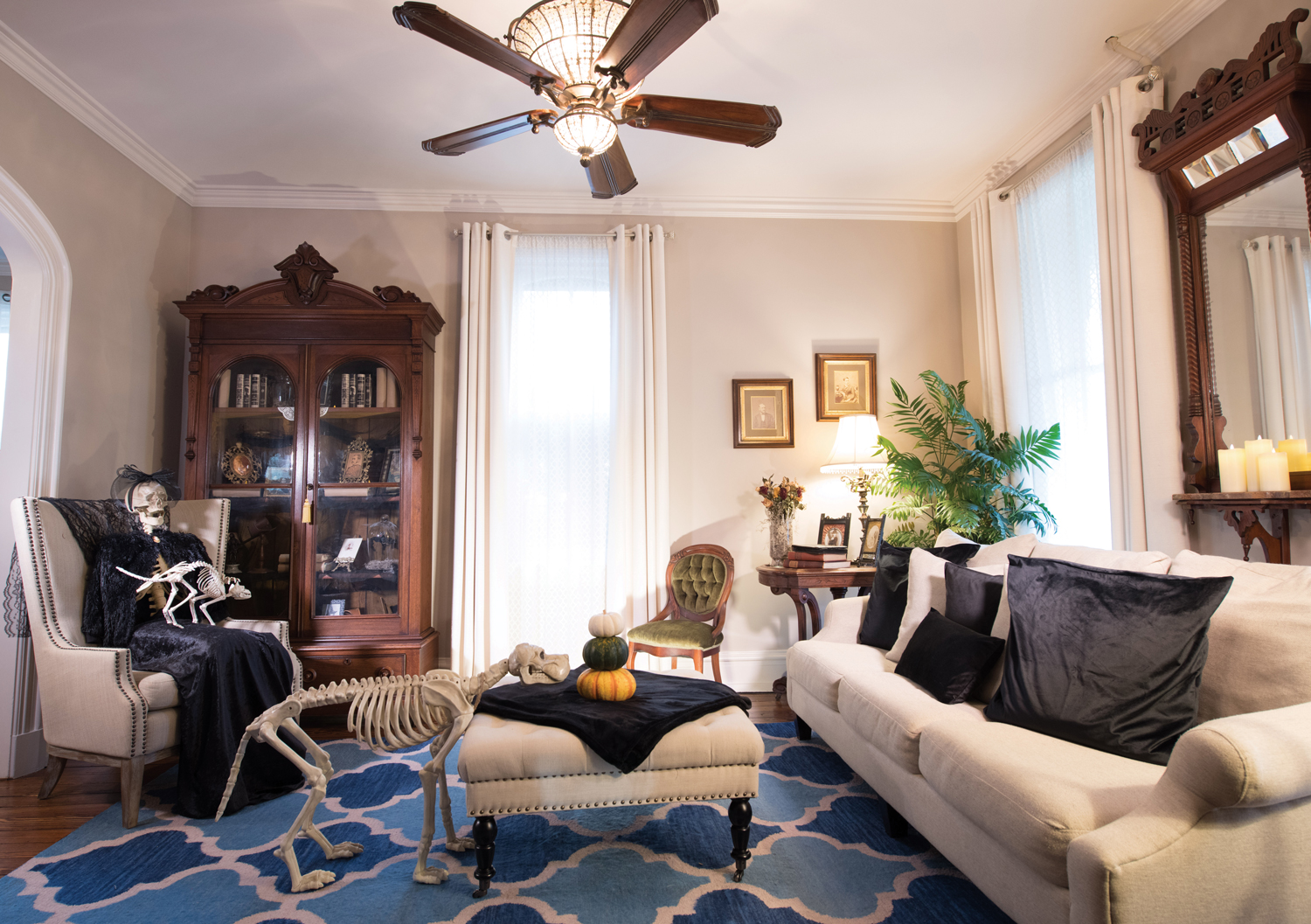 The breakaway bookcase in the parlor, which was purchased at the Brimfield Flea Market in Massachusetts, brings scale to the 10-foot ceiling.

“We love Trick-or-Treat night,” Crystal shares. “We set up a cemetery on the front lawn, have projections going in the windows and Glen short-circuits the porch light.” On a “slow” night, they’ll hand out 300 pieces of candy.

The Schaeffers have another reason for celebrating Halloween. Their daughter, Riley, was born on October 31. And, no, she has never had a Halloween-themed birthday party.

As for last year’s house tour, the Schaeffers were thrilled to show their first visitors through the house. “Members of the Brown family were our first visitors,” Crystal says. “They wanted to see what we did with the house and we were happy to give them the grand tour. They seemed very pleased, which made us happy.”

The Schaeffers’ home will be on this year’s Columbia Halloween House Tour. They plan to welcome visitors to their “Dead and Breakfast Inn.”

The era’s namesake, Queen Victoria, loved Halloween and the most coveted invitation during the fall social season was to the annual party she held at Balmoral in Scotland. Many of the traditions that now define Halloween are rooted in the Victorian era. 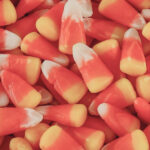 Candy Corn was introduced in the 1880s by the Wunderle Candy Company of Philadelphia. Candymaker George Renninger concocted the treat out of sugar, corn syrup, marshmallow, fondant and other ingredients. Cincinnati’s Goelitz Candy Company (now Jelly Belly) began producing a similar treat they called Chicken Feed in 1898 and the rest is history. Candy Corn revolutionized Halloween as it was among the first manufactured treats to be handed out to trick-or-treaters. 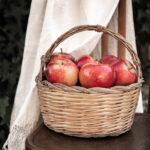 Before manufactured treats were slipped into bags, trick-or-treaters received homemade treats, apples and nuts. The apples helped homeowners economize as they were plentiful and inexpensive as compared to chocolate and other sweets. 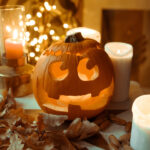 Jack-O-Lanterns are rooted in Ireland. Legend has it that a ne’er-do-well known as Stingy Jack struck a deal with the devil that he would never claim Jack’s soul. Upon his death, Jack was not welcomed in heaven or hell and was doomed to wander the Earth for eternity with only a hollowed-out turnip lighting his way. In the 1800s, it became customary for the Irish to carve faces into root vegetables such as turnips and potatoes and sit them on doorsteps and windowsills at Halloween time to ward off evil spirits. Irish immigrants continued the tradition, using the more plentiful pumpkins and gourds that grew in America. 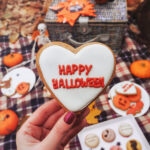 During the 1800s, Halloween had romantic connotations. Superstition held that if a woman gazed into a mirror at midnight on Halloween, she would glimpse the reflection of the man she would marry. If a skeleton appeared, she was destined to be an old maid. 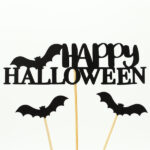 Halloween-themed paper goods and party favors came into vogue during the late 1800s. 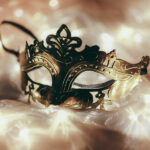 Masquerade balls became fashionable at Halloween during the 1800s. Initially, partygoers borrowed from historic figures to fashion their costumes. Later, the discoveries made by archeologists and astronomers led to a fascination with costumes that conveyed ancient civilizations and celestial themes.