In my younger years growing up in the city, expansive cemeteries served as footpath shortcuts to get from point A to point B. The monuments, gravestones and statuary dedicated to the departed were simply a backdrop to my travels. After I moved out of the city, I couldn’t help but notice the small, seemingly abandoned gravesites dotting the countryside. 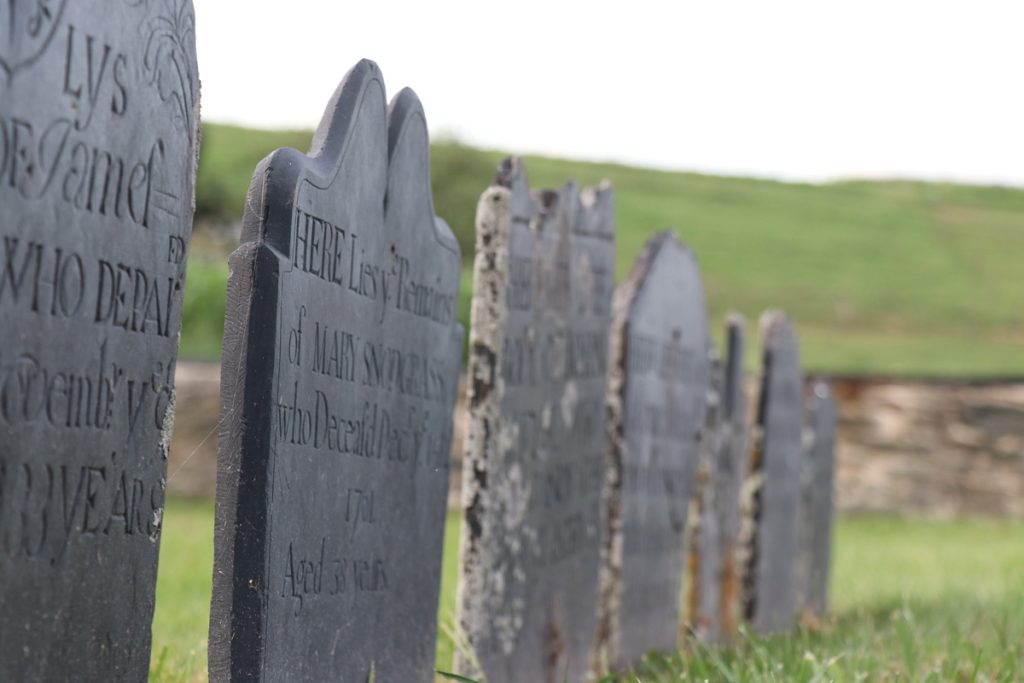 The graveyard at Chestnut Level in Southern Lancaster County dates to 1725. The earliest markers were made of black slate, which has helped them to withstand the passage of time. The markers are works of art, as they are carved with flowers, animals and other symbols. Reading them is fascinating.

I would often see my high school English teacher, nearing retirement in the 1990s, mowing and weeding a small patch of earth pocked with a handful of stone markers at the intersection of two seldom-traveled roads in East Earl Township. In small graveyards like this, markers fight against encroaching roadways. Stones of history stand – and lie – tucked away in corners of fields.

In the city, places like the 32-acre Woodward Hill Cemetery, founded in 1852 and the resting place of the 15th President of the United States, James Buchanan; Lancaster Cemetery, with its 100-plus-year-old limestone entrance created by famed local architect C. Emlen Urban; and the Shreiner-Concord Cemetery, with the honor of remembering statesman and abolitionist Thaddeus Stevens, carry their merits proudly. The small family plots – like the one looked after by my former teacher, Earl Pickel – are lonesome, neglected and forgotten … for the most part. 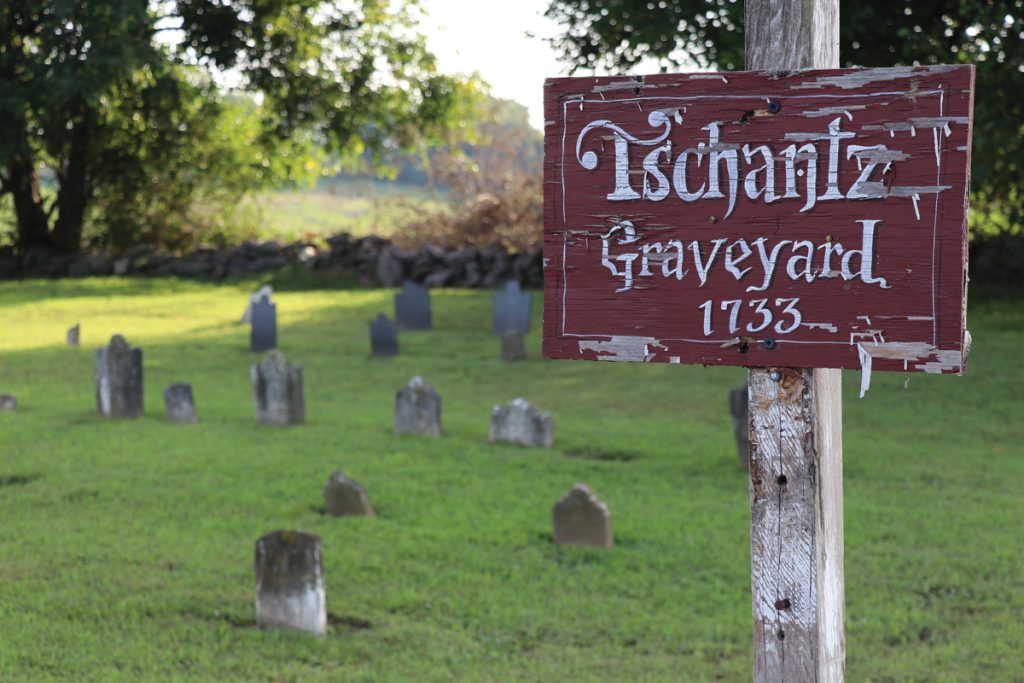 The Tschantz Graveyard, near Lampeter, dates to 1733. It is believed to be the final resting place of Martin Meylin, the inventor of the Pennsylvania Long Rifle.

Some will not let these beds of the afterlife drift away into nothingness. Jim McMullin likes to say, “We speak for those who can’t speak for themselves.” The nonagenarian helped form Grave Concern Inc. back in the 1990s to preserve the county’s cemeteries and gravesites otherwise forgotten to time. Today, the nonprofit is headed by Sam Mecum, attorney and acting legal arm of the group.

“The whole idea is to promote the preservation of historic graveyards in Lancaster County,” says Mecum. “Lancaster County has been around a long time … and since the early 1700s, we’ve had little family plots. Left unprotected, these burial sites just disappear.”

This was almost the case with the Mayer Cemetery, which contains the recorded burial of the infant Mina Meier in 1725. The family plot is home to 21 headstones and 17 footstones; in 2013, it vanished from construction plans for the new Shoppes at Belmont. Grave Concern quickly brought the matter to the attention of the municipality, and the developer graciously chose to not only preserve but enhance the site with landscaping and signage. The Mayer Cemetery stands out of sight, safe and unsullied beside the Whole Foods Market. 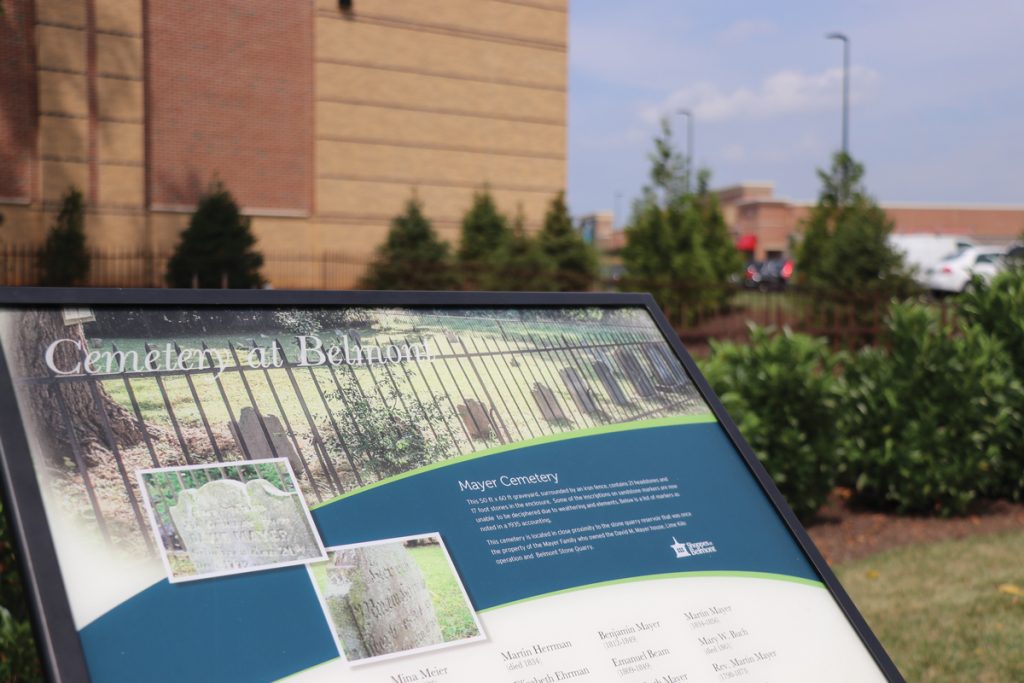 The Mayer Cemetery, located off Fruitville Pike (beside Whole Foods), nearly met its demise until Grave Concern stepped in and worked with the municipality and the developer of the Shoppes at Belmont to save it.

“It’s one of my prouder moments of activity with Grave Concern,” says Mecum, who has been working with the organization for 23 years.
The Mayer Cemetery is an example of how the collective thinking about these small plots has changed. In the past, gravestones were often considered a nuisance and sometime discarded or moved. (The Historic Burial Places Preservation Act of 1994 makes removing a stone, fence or monument from a “historical burial place” a second-degree misdemeanor offense.) A deeper understanding of their importance and a push toward stewardship have prevailed as of late. “We still have a need for an organization like Grave Concern. People tend to think governments take care of this kind of stuff,” Mecum says. “There are hundreds upon hundreds of these cemeteries, and they always need work,” he says of fences needing mended and stones requiring repair.

The headstones are a living record of our county history and date back to the land’s first European inhabitants. Historian-genealogists Darvin L. Martin and Regina Christman Martin have recognized Tschantz Graveyard and the old Chestnut Level Cemetery as two of the oldest, non-Native American burial sites in Lancaster County. I took a trip out to each to have a look around.

Located just off the lesser traveled portion of Penn Grant Road in West Lampeter Township, the Tschantz Graveyard sits alongside Pequea Lane under the shade of a few old trees growing at the edge of a cornfield. A lone designator marks its place and gives a year of 1733. Historians claim the site is the resting place of settlers Martin Meylin, Jacob Miller and Wendel Bauman (Bowman), who predate the establishment of the county itself. 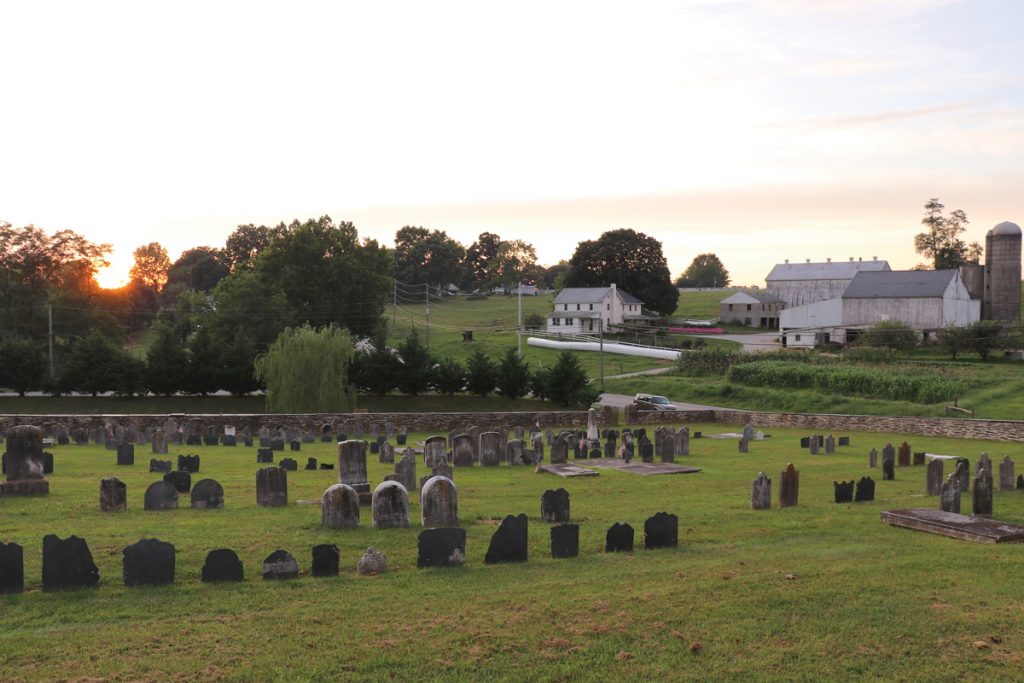 The graveyard at Chestnut Level is surrounded by farmland.

After my visit, I stumbled onto a blog called Uncharted Lancaster, which told me more about Martin Meylin, who is credited as the inventor of the Pennsylvania Long Rifle. Meylin’s historic gun shop is less than 4 miles away on the northeastern boundary of Willow Street. The Swiss settler is immortalized with a plaque on the still-standing building at 1501 Eshelman Mill Road.

Farther south in Drumore Township sits a quaint spot called Chestnut Level, where the headwaters of Fishing Creek form on rolling farmland. It is here where some of the county’s earliest settlers have been laid to rest. The old cemetery, not the one attached to Chestnut Level Presbyterian Church, is nearby at the intersection of Slate Hill and River roads and contains what is claimed to be 14 of the oldest grave markers in the county. The beauty of these markers – both aesthetically and historically – is they are made of black slate, which has withstood the test of time in an amazing way. Carvings of stars, flowers and animals adorn nearly 300-year-old tombstones where exquisite and elegant script details the passing of the deceased. A pillar at the entrance to the Chestnut Level Cemetery establishes it in 1725. Lancaster County was founded in 1729. 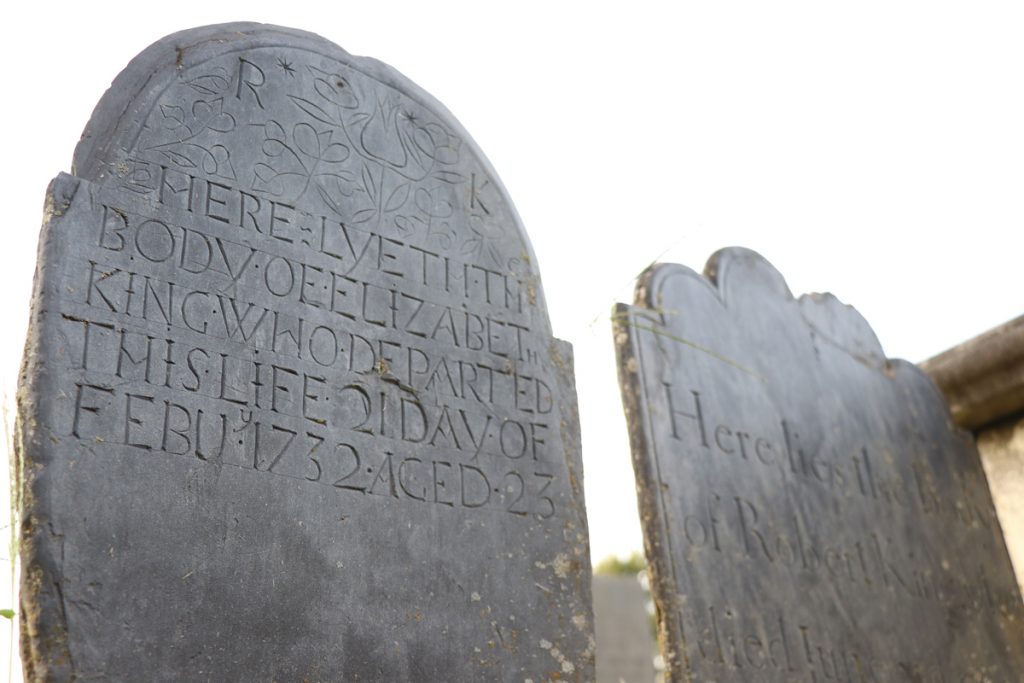 The marker of Elizabeth King may be the county’s oldest original stone still in existence. King died in 1732 at the age of 23 and is buried at Chestnut Level.

Back at the new portion of the cemetery, I took time to find the gravesite of Elizabeth King. Hand-carved flowers adorn the top of her stone upon which pale and golden lichens cling. It reads: “Here lyeth th(e) body of Elizabeth King who departed this life 21 day of Febu’y 1732 Aged 23.”

Martin wrote me via email when I contacted him about King’s grave marker, “There are more modern stones that commemorate older individuals, and there are certainly older graves that are no longer marked … I still think (King’s) is the oldest original stone in existence in Lancaster County.”

Turns out Martin also lends his special skills to Grave Concerns as a member of the governing board. He’s just another example of the preservation-minded group of men and women who gather every third Wednesday at the Lancaster Mennonite Historical Society. Without groups like Grave Concern and people like Earl Pickel, who have no familial tie to those at rest in these sites, many more of the county’s historic burial grounds surely would be lost to time. 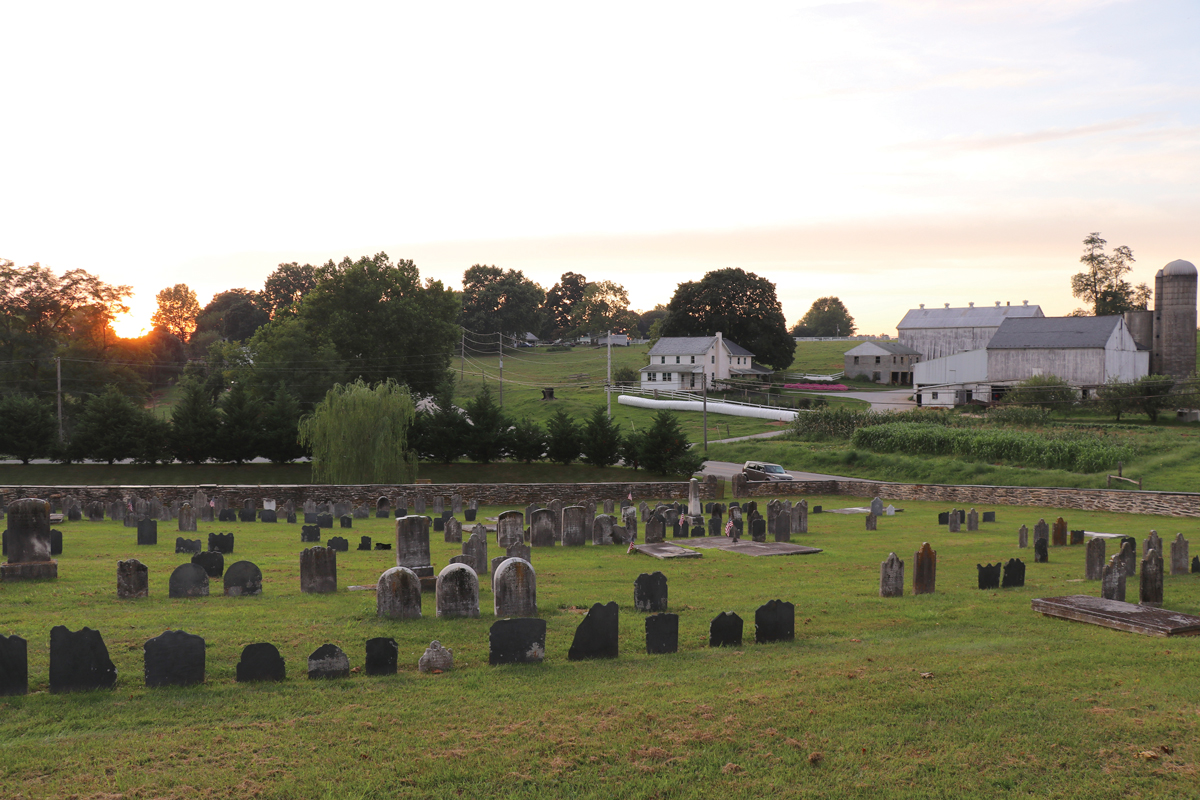 The graveyard at Chestnut Level is surrounded by farmland.