Back in 1875, the Groff brothers drove their cattle into Elizabethtown via North Market Street. Theirs was one of several butcher shops that dotted the town. Ingenuity was their key to success: ice cut from a pond on their farm was hauled to the shop in an effort to keep the beef chilled.

Joseph’s sons, Frank and Wilford, became the next owners. Customer service entered into the picture as the brothers began offering home delivery, first with a horse and wagon and later with a truck. While they continued the tradition of herding cattle down Market Street, they also invested in an electric saw and slicer.

After World War II, Frank’s children, Joseph and Helen, became the company’s caretakers. Tragedy struck when the shop was demolished by fire. However, the Groffs turned their misfortune into an opportunity and expanded from both a size and selection perspective.

Now, a fourth generation oversees the family business. Groff’s expanded once again in 1987 when the company took over a vacant property along North Market Street, allowing both the shop and butchering facility to grow in size. As a result, Groff’s, which employs 45 people, has been able to cultivate an impressive customer base that is 80% wholesale and 20% retail. Nine trucks service wholesale customers that range from local restaurants (such as The Hotel Hershey) to standholders at regional farmers’ markets. Owners of ethnic markets/groceries also rely on Groff’s, as does a client in Florida, whose truck arrives in Elizabethtown every two weeks. As for the retail aspect of the business, co-owner Nancy Groff reports, “This place is packed on Fridays and Saturdays.”

The popularity of grilling and smoking has provided shops such as Groff’s with a new lease on life. In addition to always-popular beef cuts, pork has become a hot commodity; Nancy reports that pork butts are in such high demand by grillers/smokers that they can’t restock the case fast enough on Fridays and Saturdays. Bacon is also a huge seller. “We sell it like crazy,” she notes. Sausage is also coveted, and Groff’s has 14 varieties, including flavors such as blueberry maple, Cajun, Italian (hot or sweet), and peach jalapeño. Again, according to Nancy, grillers snap it up.

The area’s cultural diversity has made Groff’s the go-to place for ethnic groups. As a result, new products/cuts have joined the menu. Nancy points to fresh belly of pig as an example, explaining it’s widely used among Asians. “It’s interesting to see how one cut is used in so many ways,” she says.

You name it, and it’s probably available. “Or, we will find it for you,” Nancy guarantees. As a result, the customer base – primarily representing Lancaster, Dauphin and Lebanon counties – for the retail aspect of the business covers the spectrum. Older customers select products they’ve been eating since childhood. (Scrapple or pudding, anyone?) Younger foodies arrive with recipes in hand. Families eat healthy through the market planner packages that are available. Ethnic groups have discovered products that help to capture a taste of home.

Beef lovers will find nearly four dozen products available, ranging from brisket and Delmonico steak to ground chuck and tripe. The pork menu includes more than two dozen products. (The Groffs work with farms that are located within a 25-mile radius of Elizabethtown.)

The lineup also extends to smoked products, deli items (some made in-house) and poultry. The shop also sells condiments and sauces (and more) for one-stop shopping. There are even bones and hogs’ ears for your dog. And, whole roasting pigs are available for the ever-popular pig roast.

Specialties of the House

“We make our own smoked products,” Nancy notes. Ham? It’s par for the course to sell 800-plus the week before Christmas. Custom cutting is also a Groff’s specialty. Deer butchering is another of the company’s trademarks. “That keeps us busy from October right through January,” Nancy notes.

However, the Groffs are especially proud of their mincemeat, which is used to create pies and other savory desserts. Made from an old family recipe, the mincemeat is comprised of apples, raisins, beef, sherry, rum, cider and spice. “We make a ton of it September through December,” Nancy reports. In her estimation, mincemeat is an integral part of a traditional Thanksgiving or Christmas dinner. Groff’s mincemeat is renowned and is shipped to bakeries and specialty stores throughout the country. 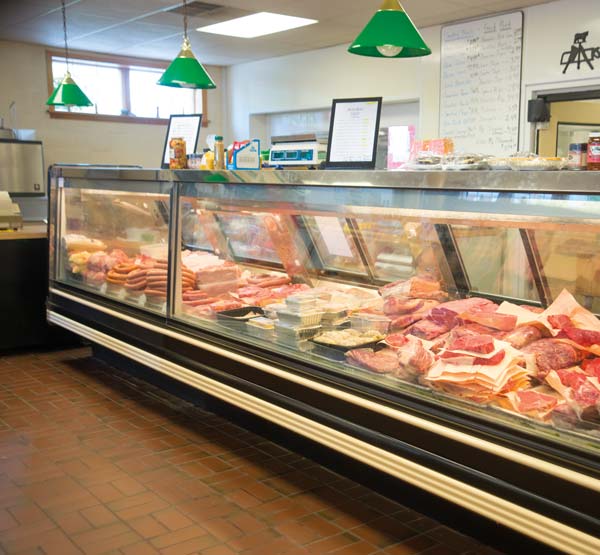