It’s not unusual for families to outgrow their homes. Nor is it unusual for businesses to relocate when office space becomes inadequate. What happens when a family-owned business needs to expand? In the case of Garman Builders, the company solved the problem by embracing adaptive reuse and relocating to a new headquarters that includes a state-of-the-art design studio. 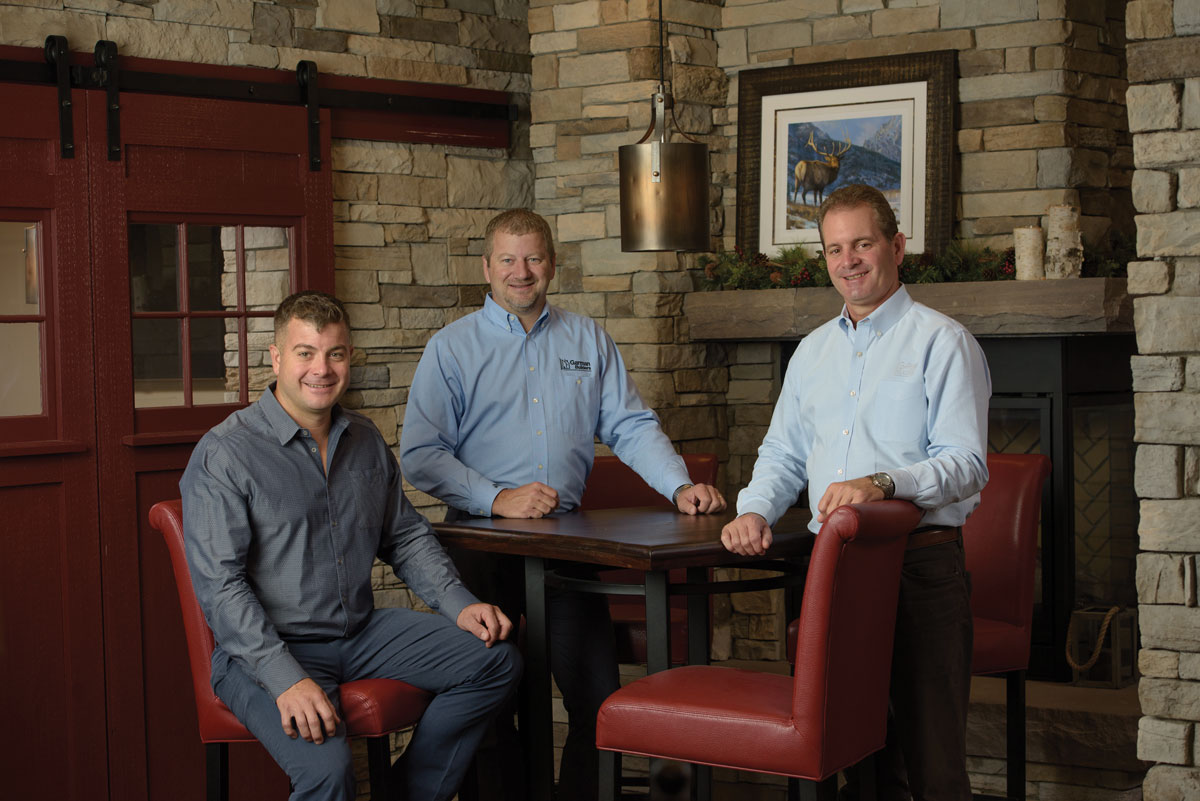 The Garman brothers, left to right, Jason, Shawn and Mike.

More than five years ago, the Garman brothers  – Mike, Shawn and Jason  – realized their company’s headquarters along North Reading Road in Ephrata, was not keeping  pace with the growth of the multifaceted company. Founded in 1972 by their parents, Ivan and Charmaine, Garman Builders was originally located at the family’s home in Ephrata. “My dad used to meet with clients around our dining room table,” Shawn recalls. “We were not fond of those meetings,” he says. “It meant we had to be quiet and keep the television volume down low.”

Still, the Garman brothers knew from the time they were small children that they would one day join their parents in the family business. In fact, you could say that Shawn was born to it. “My mom was helping my dad hang drywall on the night I was born,” he says of Charmaine, who wore the hats of wife, mother, PR and marketing person, bookkeeper and staging wiz for the company’s model homes and Parade of Homes entries. 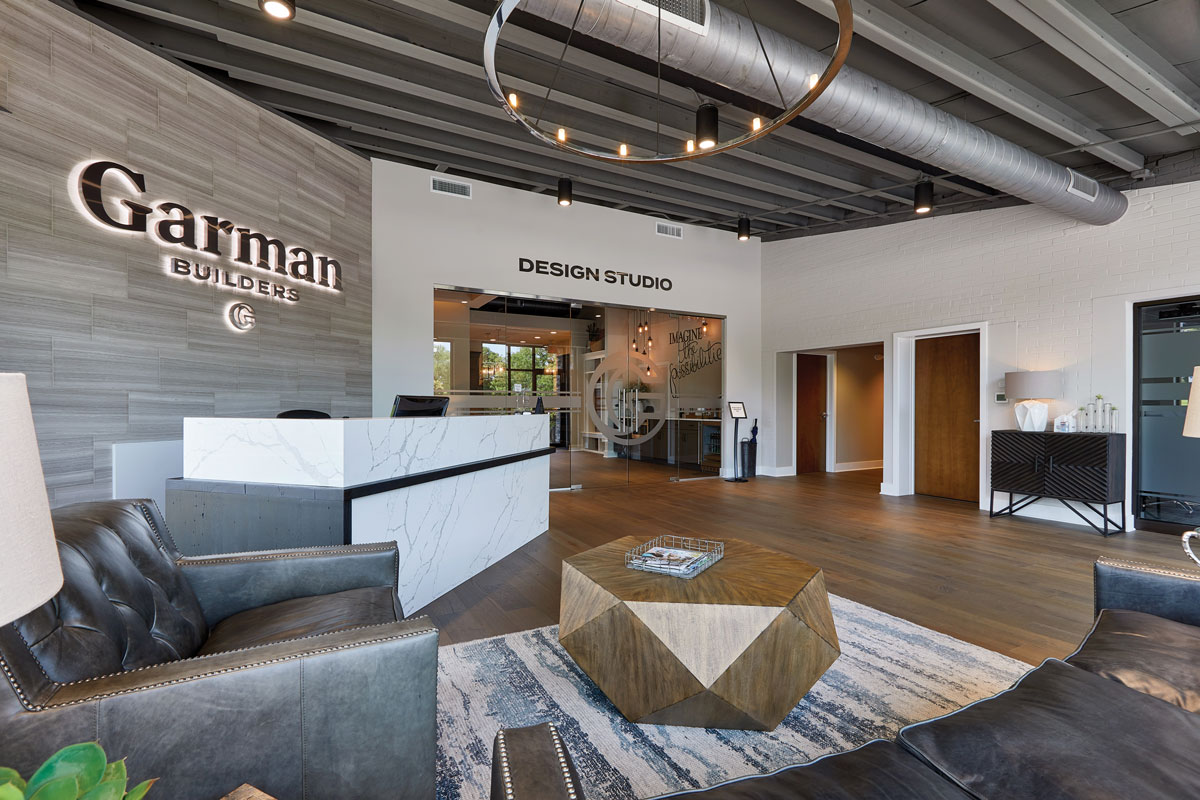 All the flooring, finishes, moldings, lighting, etc., seen in the reception area, model rooms and design studio are representative of products clients can choose for their own homes. Garman’s design studio was a recent winner – Best Showroom category – of the Building Industry Association of Lancaster County’s Pillar Awards, which recognize professional achievement. In addition, the company took top honors in the Builder of the Year and Remodeling Company of the Year categories.

Shawn, who is the middle son, remembers going to job sites with his dad and brothers when he was 5 years old. “It was our job to sweep the floors and carry wood to a pile,” he recalls. He also shares that as much as it was a bonding moment for the Garman men, Shawn believes Ivan saw it as a way to give Charmaine a break from dealing with three energetic boys.

Speaking for his brothers, Shawn says becoming part of the family business was “all we ever wanted to do.” Now, a third generation has followed in their grandparents’ footsteps, as Mike’s sons, Jared and Matthew, and Shawn’s children, Brandon and Abby, have joined the staff. 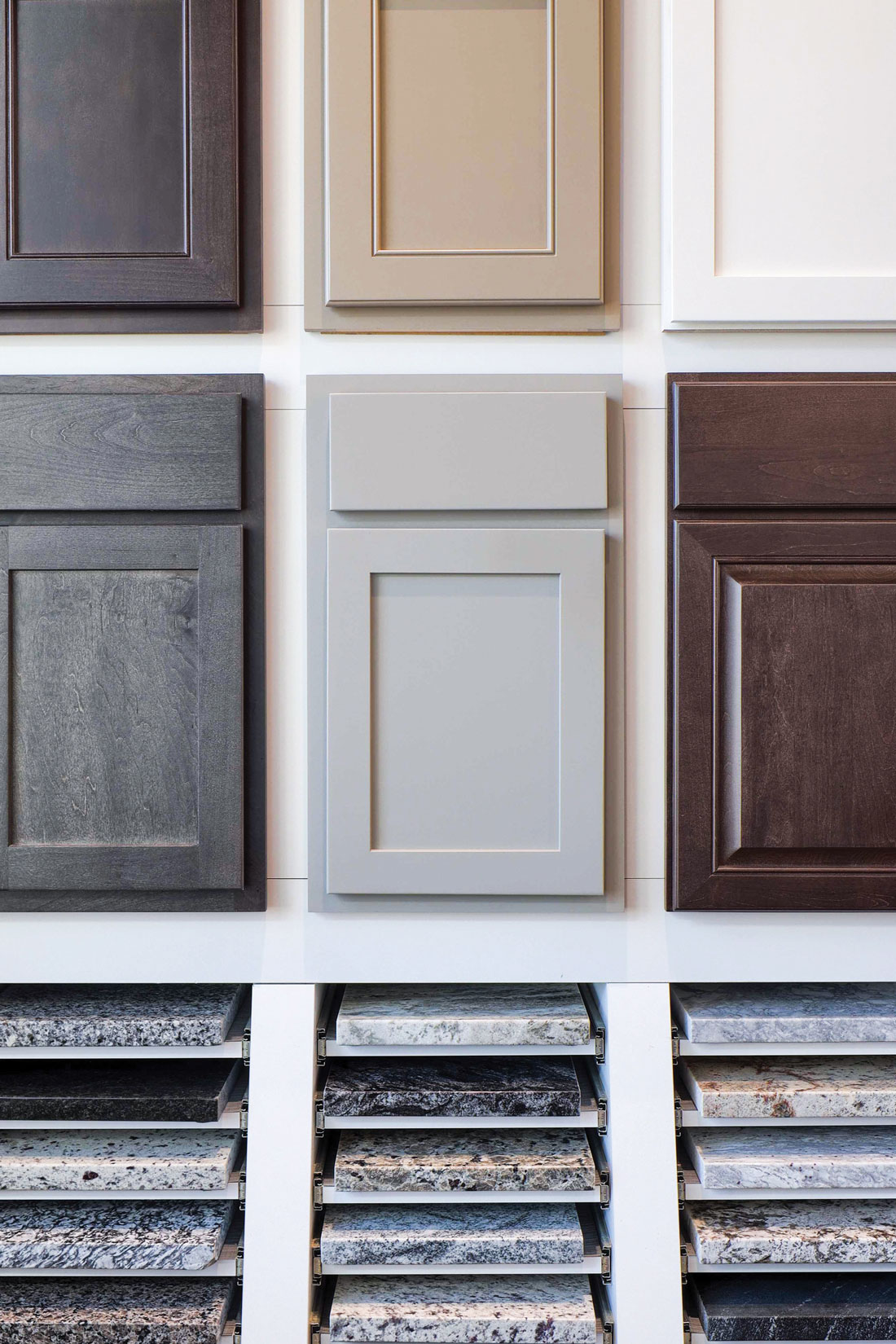 When the business outgrew the family garage, it moved to the site of a former auto dealership along North Reading Road, where it remained for 23 years. There, the home-building business expanded to include renovation and restoration divisions. The company’s new-home communities were springing up all over South Central Pennsylvania. “It was time to do some major renovations or move on,” Shawn says.

The three brothers live in close proximity to each other in the Brunnerville area. During their travels they often passed a building that sits at the corner of East Main and North Oak streets in Lititz. “I often thought it had possibilities,” Shawn says. So, he placed a call to the building’s owners, Listrak, a multi-channel marketing company, and, to his surprise, learned the building had just been put on the market.

While Listrak had outgrown it, a walk-through convinced the Garmans that they had found their company’s new headquarters. “We have a thing for former car dealerships,” Shawn laughs, explaining an auto dealership once called the property home, as did a home-furnishings store and a succession of other businesses. 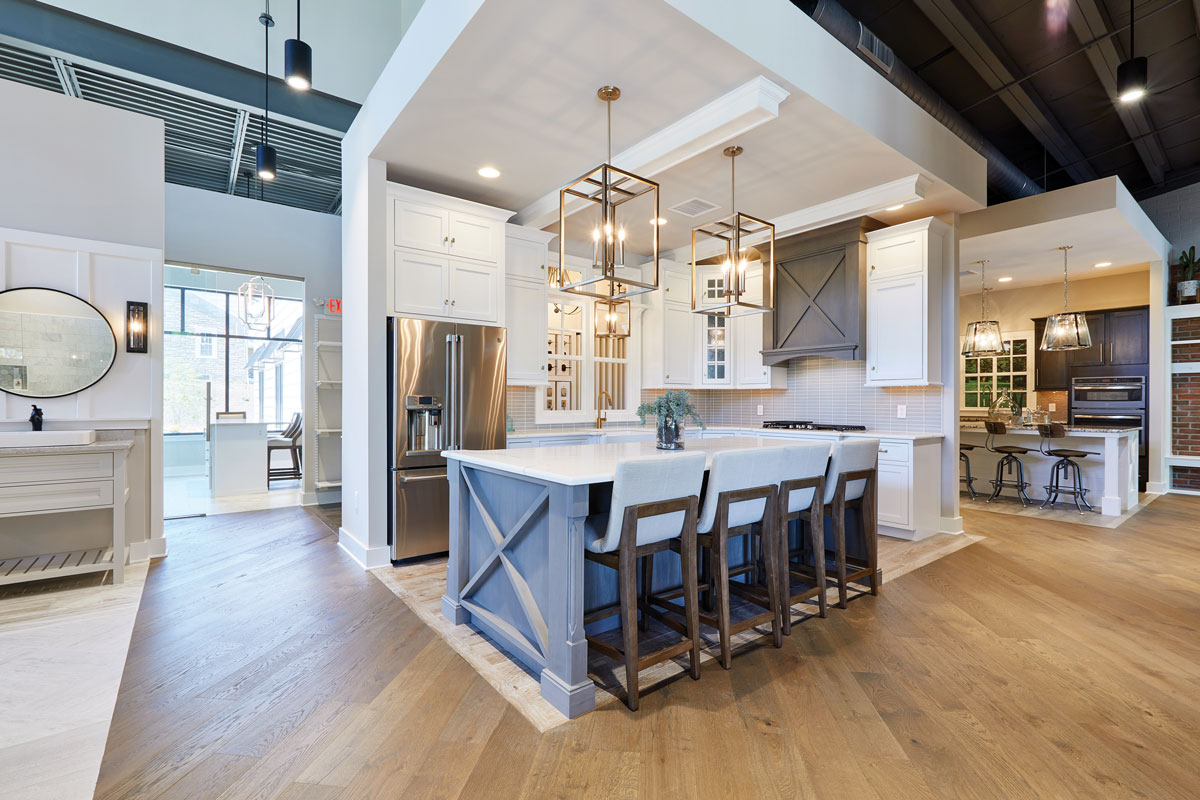 Model kitchens provide a starting point for clients to formulate ideas for their own kitchens.

The Garmans also had an idea beyond office space. They wanted to provide clients with a one-stop selection experience. “We live in an instant-gratification world,” Shawn observes. A design studio would allow Garman to showcase the company’s capabilities as far as moldings and finishes are concerned, plus it would enable clients to select all aspects of their home’s design and finishing touches under one roof. The days of going from vendor to vendor – which can be time-consuming, sometimes frustrating and always mind-boggling – to choose the detail items that define a home’s style, would be relegated to the past. “We weren’t giving the customer a good experience,” Shawn says. “We wanted to change that. We wanted to make it an enjoyable experience.”

Three years ago, the brothers got serious about transforming the building into what Shawn calls a “customer-centric” design studio. They personally visited design studios outside the area and sought input from their employees. “Everyone provided input,” he says. Once they began the design process, it became evident that even this building would not accommodate their vision, so they made plans to enlarge it with a 3,000-square-foot addition. 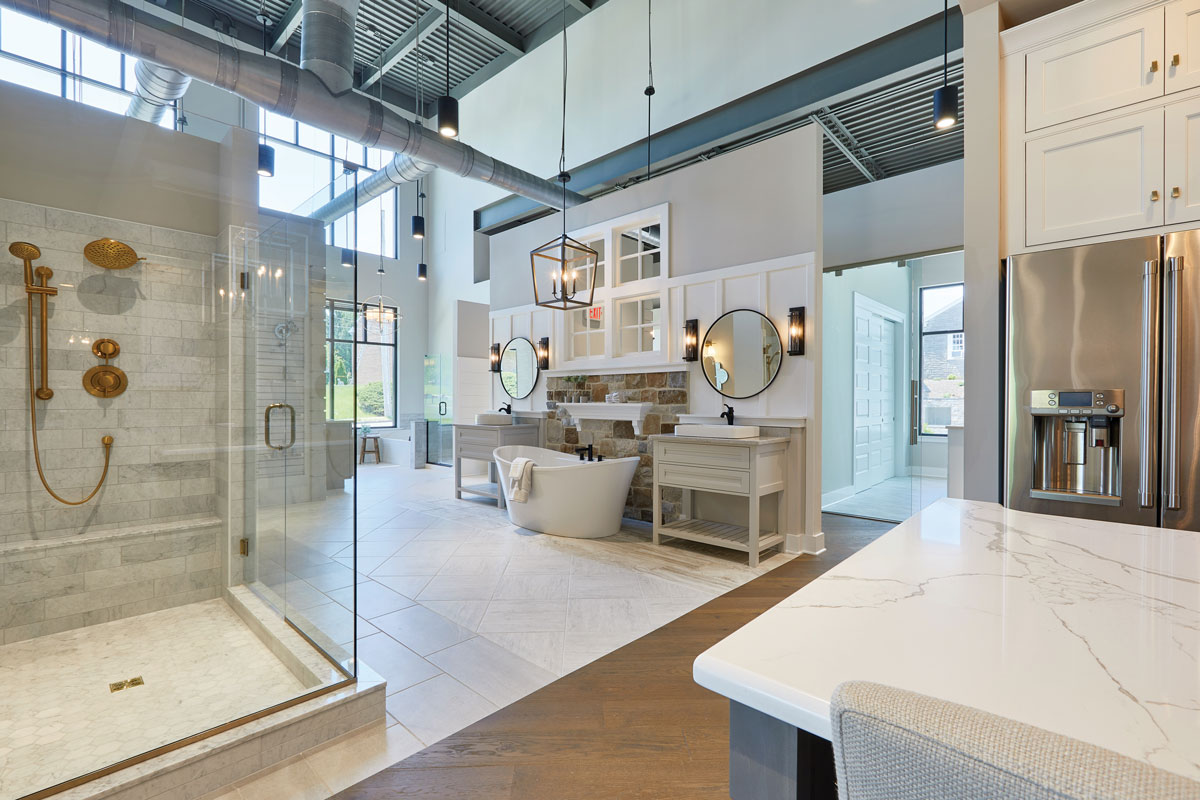 Model baths help clients envision the spa-like spaces they can design for their homes.

In the meantime, an outside consultant was brought in to streamline all the ideas that had materialized.

Last spring, the Garmans unveiled their new headquarters. The design studio is both beautiful and inspiring. Envision a home and a series of showrooms under one roof. The rooms of the “home” – including kitchens and baths – are stylishly trimmed with moldings and other finishes, illuminated, decorated and furnished. The concept extends outdoors, as well. The showrooms are outfitted with the wide selection of products that figure into Garman’s designs.

“We pride ourselves in offering our customers the most current products that are available,” Shawn says. “We feel the things we have to offer our customers represent where the industry is heading. Our trade partners have been very supportive. In fact, we are now at the size where the manufacturers are coming to us. Our work is being featured on their websites, social media and internal communiques.” 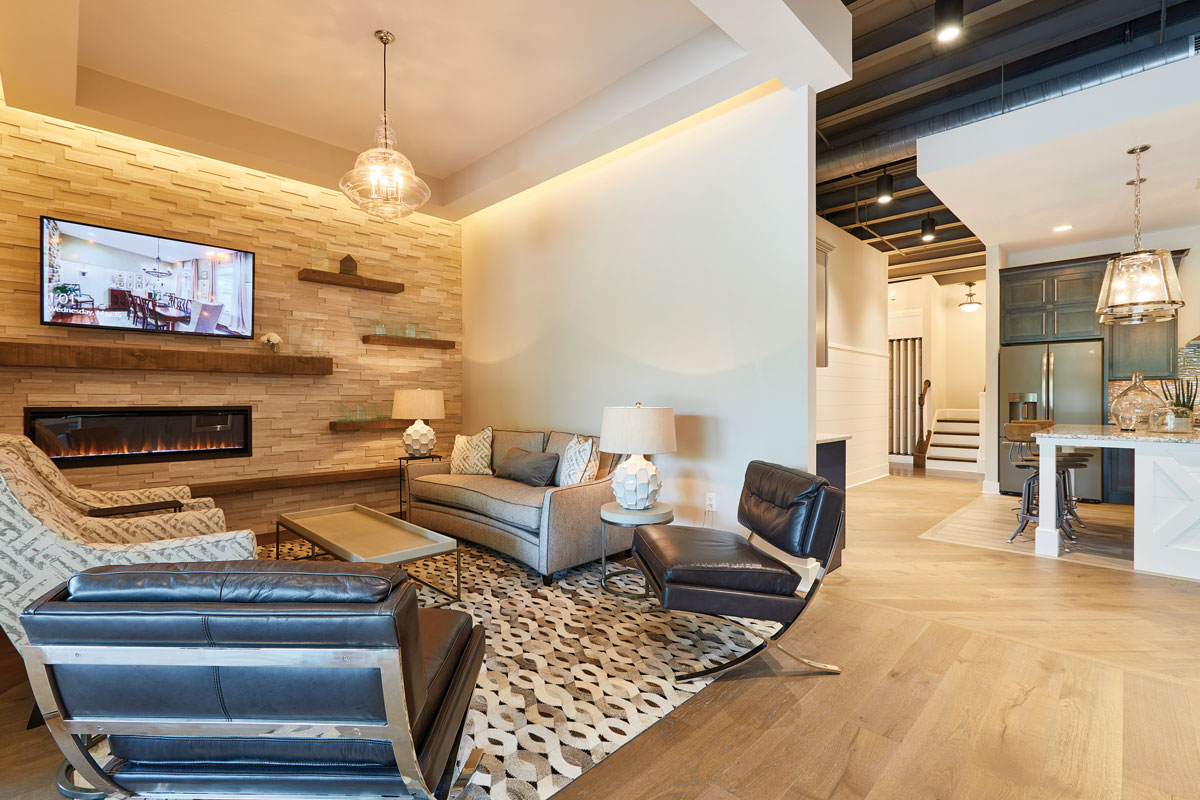 A furnished model room in the design studio.

Shawn maintains that a design studio such as Garman’s is a reflection of the changing dynamics of the region. Lancaster County, of course, has always been regarded as the epicenter of traditional styling. We have always liked our cherry kitchens, oak furniture, quilts and antiques. But, according to Shawn, “Lancaster isn’t Lancaster anymore.” He attributes the fact that Lancaster’s tastes have become more diverse to newcomers (many times from urban areas) who have been attracted to the charm of Lancaster County, the post-recession business climate, and to a new trend that is seeing parents follow their children to Lancaster in order to be close to their grandchildren. “They’ll build houses on the same street,” Shawn says.

Garman’s price points are also proving to be popular with downsizers, rightsizers and that coveted demographic, the millennials. “They are starting to buy homes,” Shawn says of the latter. 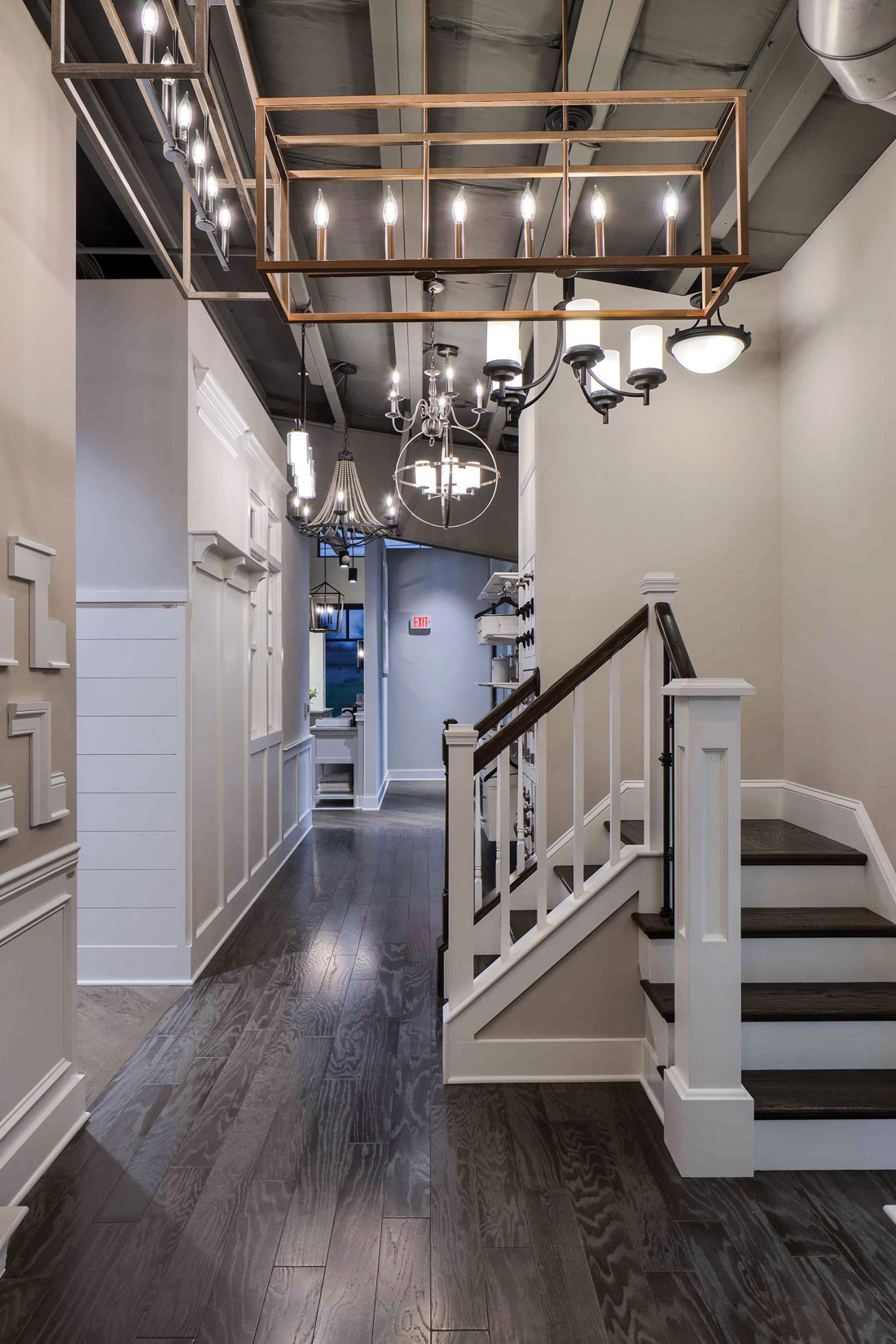 A hallway provides ideas for molding, flooring, lighting and even staircase options.

Lancaster has also become more “worldly” thanks to the Internet and television shows/networks (Chip and Joanna Gaines’ Magnolia Network is set to debut this fall) that inspire ideas for the home.

Living in Lancaster County also presents potential homeowners with a factor that is becoming increasingly difficult to find – craftsmanship. “Lancaster is blessed to have forward-thinking tradespeople,” Shawn says.

The selection process begins soon after clients sign on the dotted line. A required orientation meeting is followed by an appointment with an interior designer during which customers make their selections. “They’ll spend anywhere from three to six hours with one of our designers,” Shawn explains. ‘Everything is priced a la carte, so they walk away knowing what the final cost of their home will be.”

A 3,000-square-foot addition and upgrades to the exterior of what was originally an auto dealership provided the solution to the fact that Garman Builders had outgrown its Ephrata location.

While customers are giving the design studio rave reviews, Garman is doing the same for Lititz. “We’ve been received very well,” Shawn says. “A lot of people have told us that the work we did to upgrade the building has provided Lititz with a gateway from the east. Our employees love being in Lititz. Customers love coming to Lititz. Our new concept has received nothing but positive feedback. It’s been a win-win for everyone.”

All the flooring, finishes, moldings, lighting, etc., seen in the reception area, model rooms and design studio are representative of products clients can choose for their own homes. Garman’s design studio was a recent winner – Best Showroom category – of the Building Industry Association of Lancaster County’s Pillar Awards, which recognize professional achievement. In addition, the company took top honors in the Builder of the Year and Remodeling Company of the Year categories.