Native plants are doing battle with harmful invasives that are taking over natural areas. Some have even radically altered the ecosystems they have taken over. This month’s focus is on invasive shrubs and how to eliminate them. 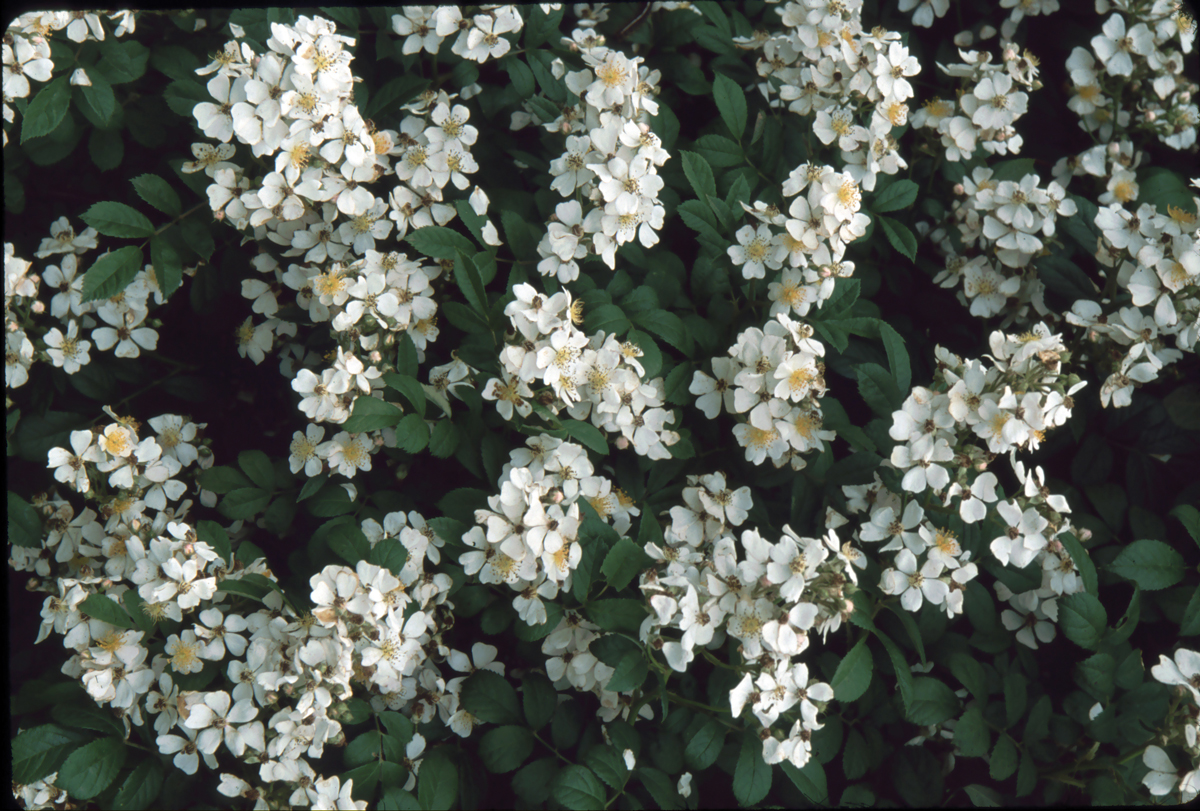 In earlier Gardening Journeys, I’ve written about planting shrubs for wildlife, especially those that produce habitat and seeds for the birds. Shrubs with fruits that last throughout the winter are especially valuable. And, particularly valuable are high-fat, calorie-rich seeds like those on our native spicebush. I’ve also promoted both native and plants that have been introduced from areas with similar climates to ours, like Japan and southeast Asia.

Most of these plants that have been introduced by intention or accident have been beneficial to us and are ecologically benign. But, a small percentage have run rampant. They have moved into natural areas where they’ve not only driven out indigenous species but, in the worst cases, radically altered the ecosystems they’ve invaded. Sadly, the misguided promotion – sometimes by the Department of Agriculture – of several exotic species for erosion and livestock control has been a very important contributor to the problem.

One list includes over 300 plants that are invading wild lands in the continental United States; about half of these were brought here to beautify our gardens. Some authorities claim that invasive plants are a major cause of the extinction of native shrubs. Not often discussed is a much tinier fraction of native plants that have shown signs of invasiveness. Examples of such introductions include: Honeysuckle (Lonicera japonica); Barberry (Berberis thunbergii); Tree-of-Heaven (Ailanthus altissima); Multiflora rose (Rosa multiflora); Autumn olive (Elaeagnus umbellata); and, south of us but on its way here, Kudzu (Pueraria lobata).

How These Plants Get Around

The distances seeds travel can be astonishing. Seeds move by wind or water, on fur or feathers, or in scat. They also arrive in sacks of grains or in mud stuck onto wheels. These invasive plants reproduce rapidly and form stands that exclude nearly all other plants. In the process, they damage natural areas, alter ecosystem processes, displace native species and, as it has become evident, can even hybridize with natives and change their genetic makeup.

Shrubs that become invasive usually produce many small seeds beginning early in their growth. The seeds typically have no special germination requirements such as exposure to cold. The plants are more generally self-fertile. They usually have long flowering and fruiting periods. But, there are also examples where many decades have passed between the first introduction and eventual rapid troublesome spread.

Invasive plants also have the ability to adapt and can grow in many different conditions.

A major thug, this wide-spreading, multi-stemmed thorny shrub is tolerant of wind, heat, air pollution and drought. It will grow anywhere except full shade. It will thrive even in poor soil since it has the ability of fixing nitrogen from the atmosphere. It is typically found colonizing the edge of woodland. All parts of the shrub are scaly and covered with spines. 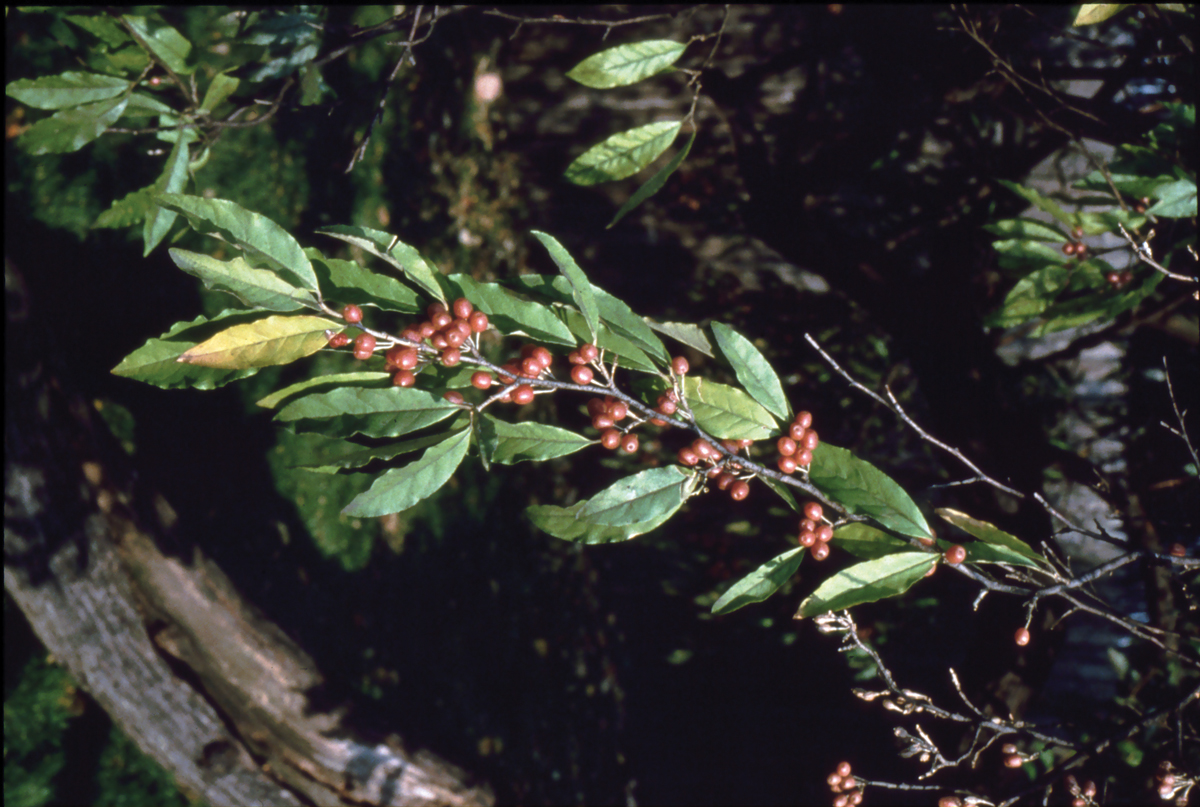 The flowers are inconspicuous apart from their delicious scent. A single autumn olive plant can produce an abundant annual crop of edible fruits (to 80 lbs.) containing up to 200,000 seeds. The berries cling on the plants through most of the winter. Birds – especially cedar waxwings, robins, mockingbirds, catbirds, thrushes, bluebirds and grosbeaks – consume the fruit and help to distribute the seed. 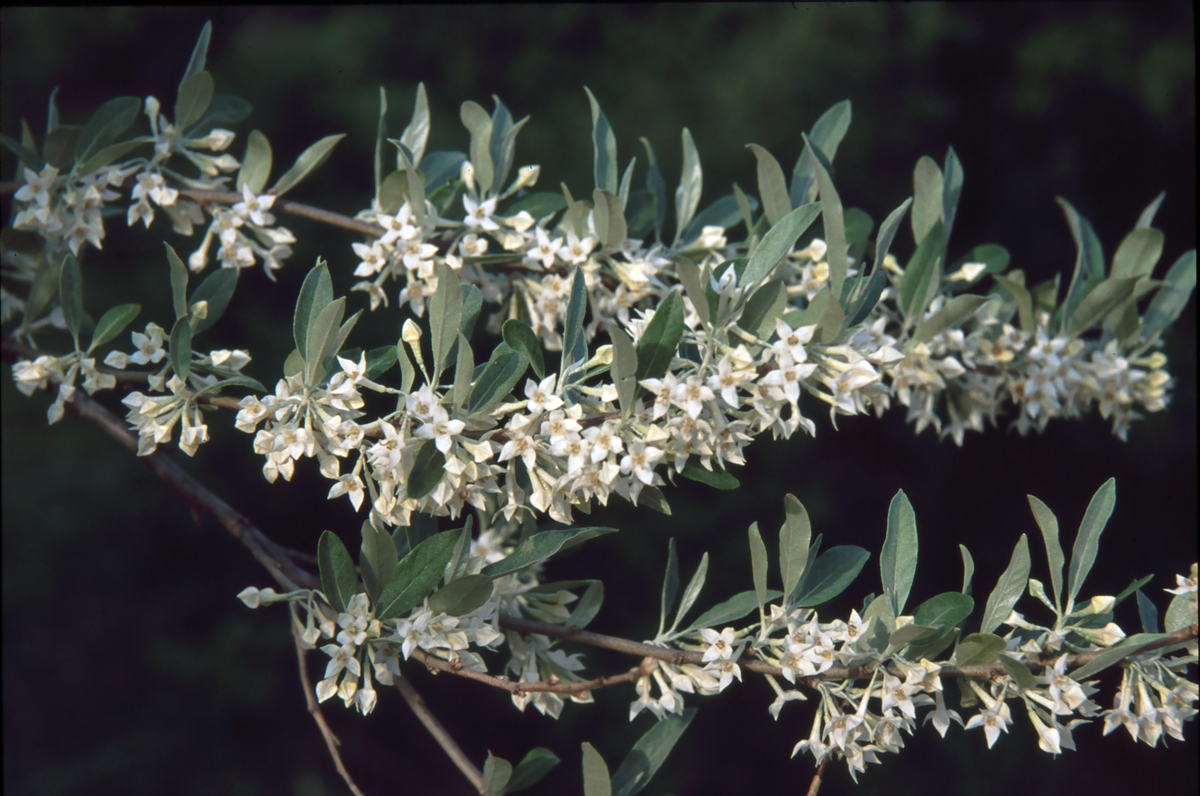 Autumn olive has been found to easily out-compete, suppress and displace native plants in the landscape through rapid growth, root suckering and self-seeding, resulting in the creation of dense shady areas that prevent continued growth of nearby plants that require sunny conditions to survive.

In the 1950s, autumn olive’s vigorous growing habits prompted the U.S. Soil Conservation Service to recommend this shrub for rural windbreaks, erosion control and for wildlife food. However, the aggressiveness and tendency to form dense impenetrable stands was soon recognized. It is now illegal to sell it in many states. Elaeagnus is easily identified by the thorny, scaly twigs and leathery gray-green leaves (2-3 inches) that have wavy edges and distinctive silver scales on the undersides. 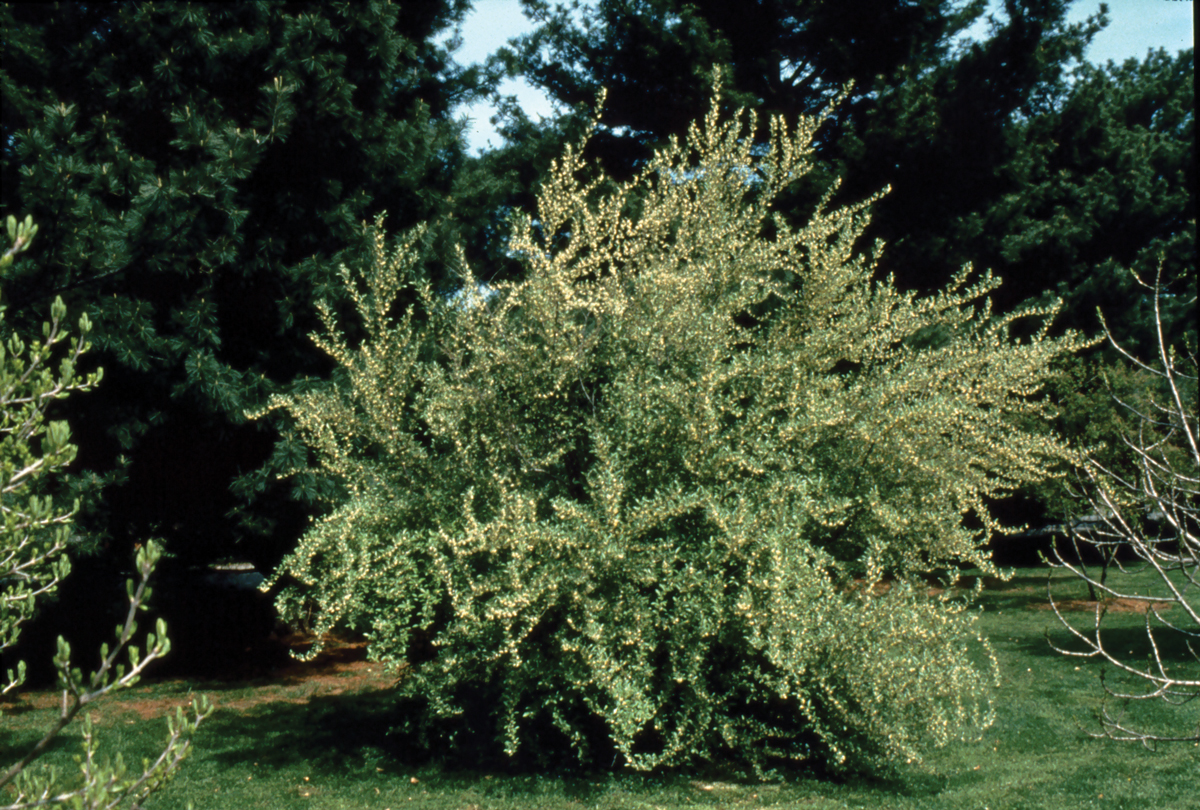 These shade-tolerant thugs grow as shrubs or twining vines. Honeysuckle, which was introduced in the mid-19th century as an ornamental fragrant shrub, quickly escaped gardens. Tolerant of many soil types and moisture levels, it invades roadside ditches and the edges of forests, overcoming native ground covers and strangling saplings. There are dozens of species of honeysuckles; some that are supposedly docile continue to be sold by nurseries. 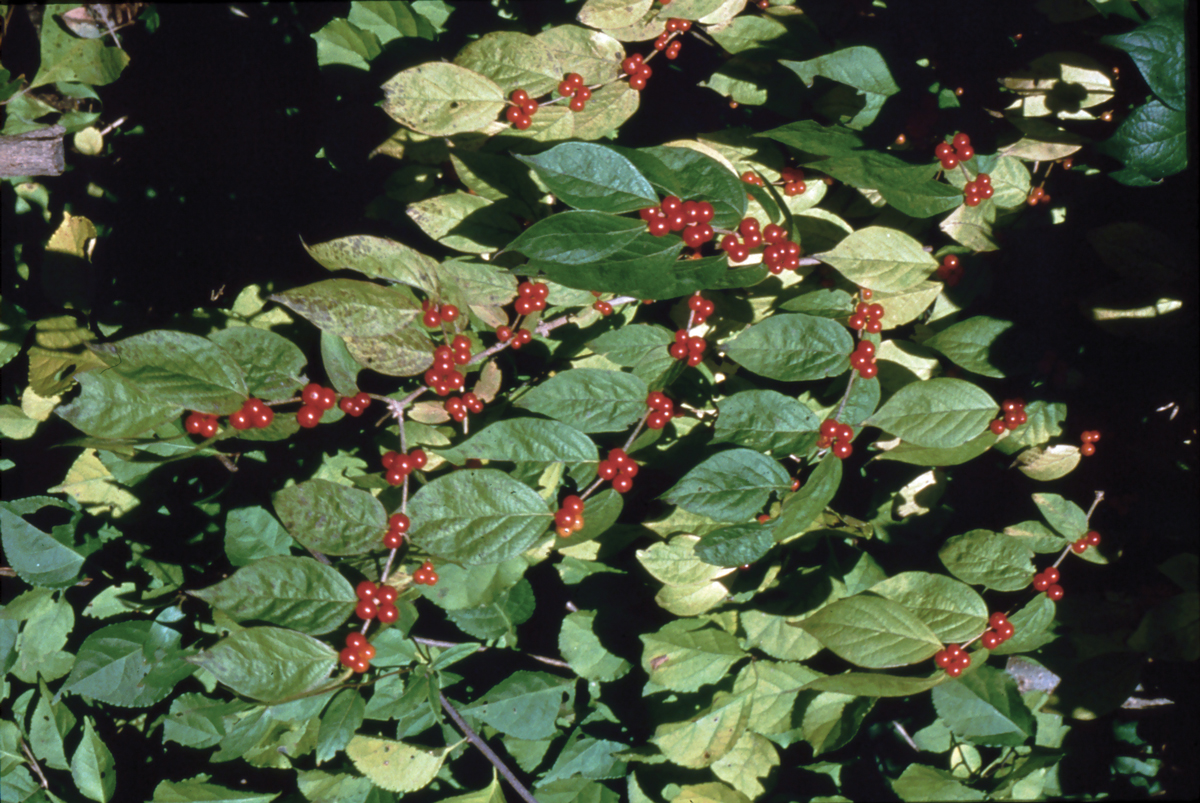 The red fleshy berries contain six or seven seeds. A well-established shrub can produce up to 1.2 million seeds. These fruits are low in nutrients and are not even the first choice of birds, which is why they remain so long on the shrubs. They are harvested once other berries are gone. Of course, deer do not eat this shrub. 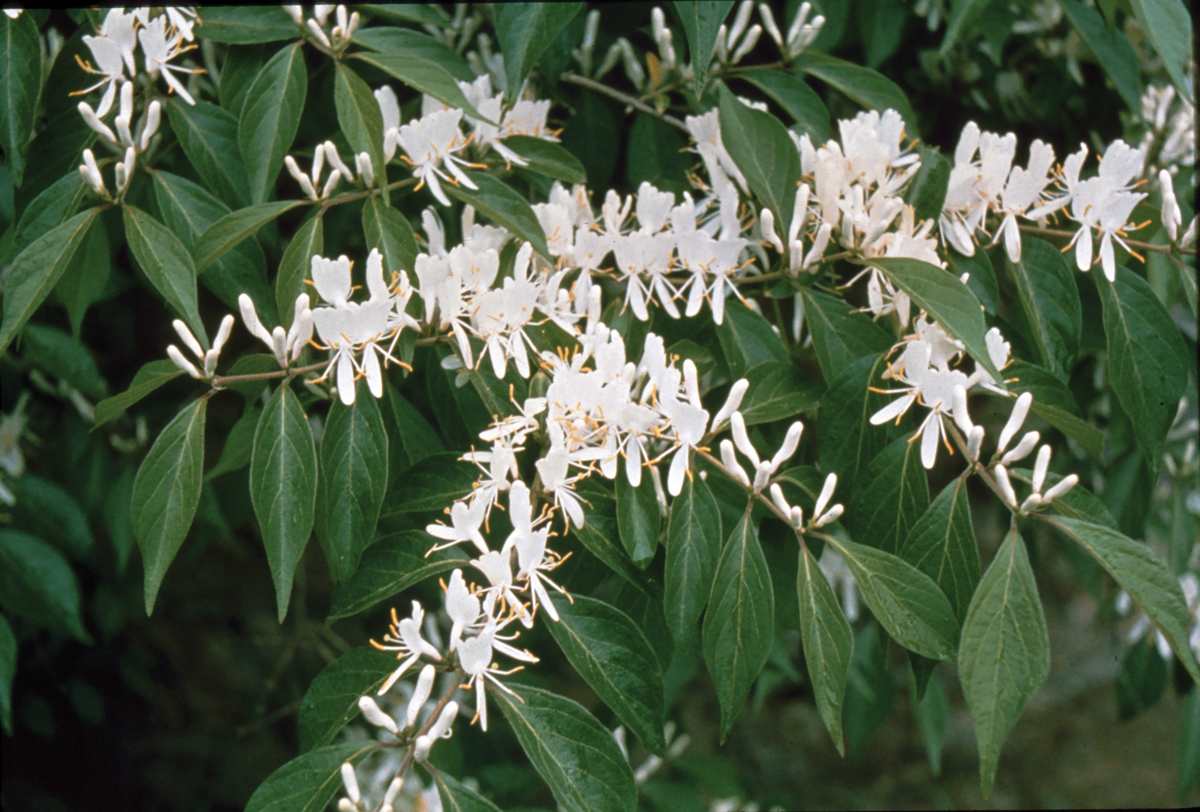 In addition to birds distributing them, the seeds can build up in the soil beneath the shrubs – up to 1,100 seeds per square yard of soil has been recorded! However, they do not germinate until we disturb the soil when we pull up the shrubs. Wicked!

Another reason honeysuckles are so successful is that they are among the first woody plants to develop leaves in the spring and among the last to shed them in fall. This gives them a photosynthetic window to produce and store the carbohydrates they need to grow and produce fruit in the low-light habitats of the understory.

The rose is considered by some a magnificent garden plant and remains an essential and sometimes exclusive element in many home gardens. I do not grow roses because to keep them flourishing, a spray, fertilizer and pruning regimen is essential. But, the monstrous invasive multiflora rose shrub needs no such coddling and appears without invitation. I have battled it for decades in my rural garden. 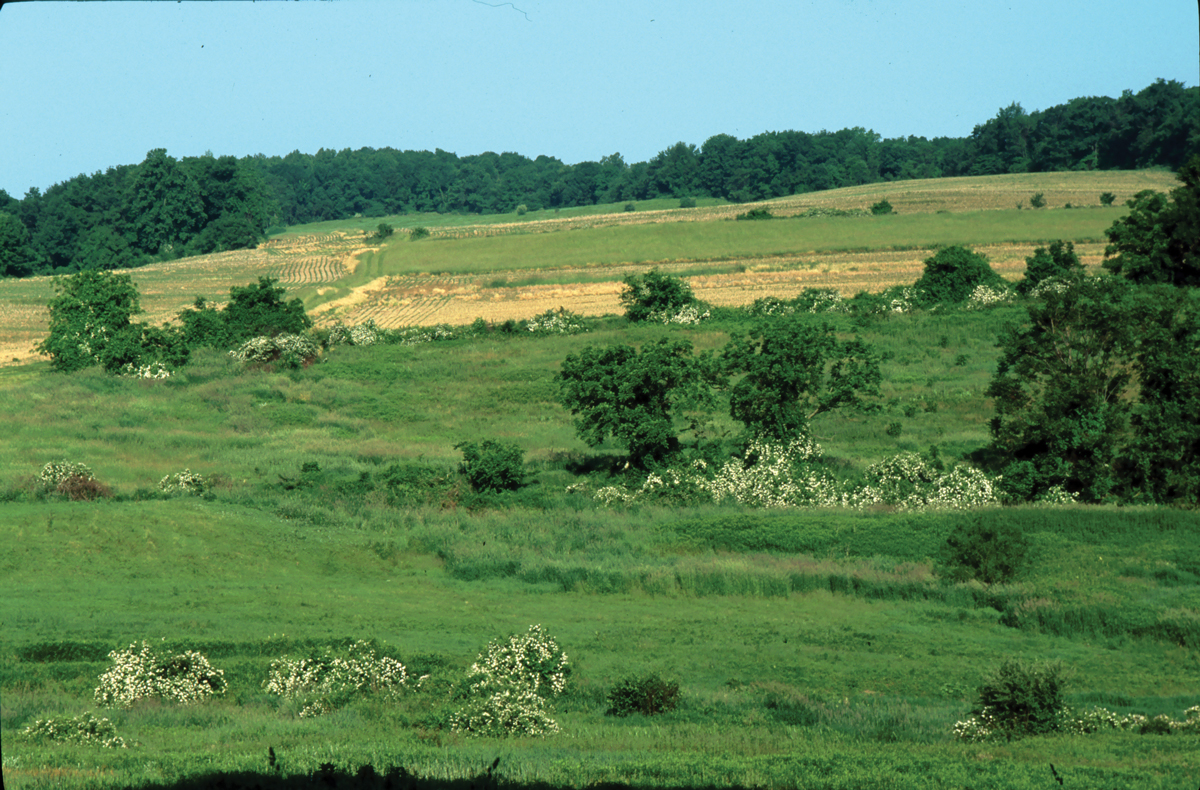 Multiflora rose is multi-stemmed with 4-10 foot-long stems that curve to the ground where the tip of the cane forms a root system and generates a new plant. Mature shrubs can be 12 feet wide. It can climb 15 feet up a tree. This rose engulfs entire pastures and edges of woodlands. The green stems are covered with prickles (sorry, botanically they are not considered thorns). By any name they are nasty because they are recurved so as to rip your clothes more easily. The abundant clusters of single white flowers appear in June and are followed by copious hips that persist into the winter to be dispersed by birds and other animals. 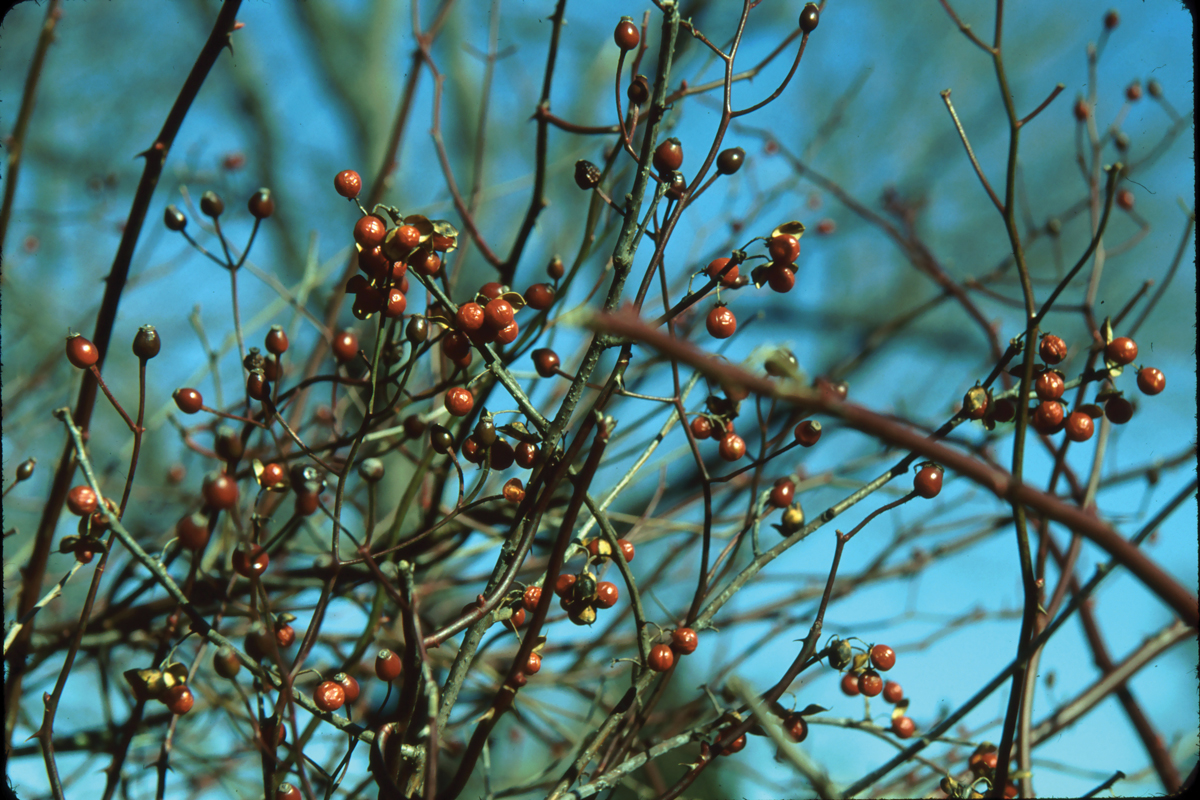 And mull over this: the bright-red fruit contains seeds that can remain viable in the soil for 10-20 years.

Multiflora rose thrives on idle land, fence rows and low-maintained hilly pastures. Everywhere it sprouts it creates an impenetrable tangle of brush. It was originally introduced from Asia and promoted as a “living fence” to control erosion and provide food and cover for wildlife.

It is very difficult to control. According to research, successful control requires mowing three to six times per season for more than one year. Repeated mowing defoliates the plant, depleting its root food reserves and eventually killing it. Unfortunately, repeated mowing can become quite costly, time consuming and laborious. Oh, and mowing disturbs the soil, which unearths those dormant seeds to germinate.

Deer will not touch this shrub, but goats and sheep can help control it. Goats are superior because they are not deterred by the prickles and can browse higher up the plants since they can stand on their hind feet. A landowner will need eight to 10 mature goats per acre for two seasons to control infested pastures.

How to Deal with Invasive Shrubs

The use of chemicals can be a difficult solution, as one must deliver an adequate amount of the appropriate chemical only at the target plants and at the correct time in their growth cycle. And, consider the potential risk to the worker and the environment.

If you take that route, apply the least amount of the safest chemical to specific species of plants in a specific area at the appropriate time to obtain desired control. Read the instructions before buying. Mix according to directions, and make sure it is suitable for your weed. Dress appropriately with protective clothing. Apply only during effective season. Be prepared to repeat treatments.

Limit the use of fertilizers, as native plants are adapted to naturally low nutrient levels. High nitrogen levels often give an advantage to weedy species that are better adapted to using plentiful nutrients for explosive growth.

Scout your property annually for invasives, and remove them before they become a problem.
Protect healthy native plant communities by limiting landscape disturbances. The often-promoted idea of thinning out native forests periodically is now being questioned. Opening up the canopy in a forest provides light, and the invasives will quickly reoccupy the available growing space. It is important to plant trees and shrubs in wooded areas where trees have been thinned or invasives have been removed.