When Pete and Carol Heth began inviting friends, colleagues and clients to dinner, they did all the cooking. Now, everyone pitches in! 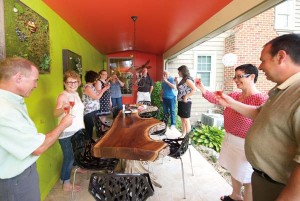 The evening started with a toast on the patio. 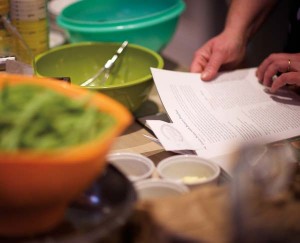 Carol and Pete do all the prepping and provide the cooking teams with the ingredients and directions they need to finish their courses. 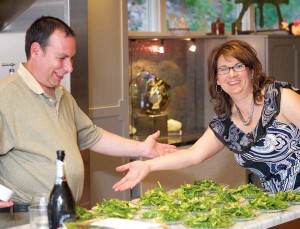 Peas were the star of the salad course for the June dinner. 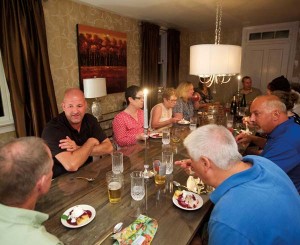 Enjoying the dessert course around the dining room table.

What’s hot in New York, Chicago, San Francisco and DC? The Un-restaurant.  According to the July issue of Food & Wine magazine, “Everyone arrives at the same time, hangs out in the kitchen, then lingers for hours over a fabulous meal.” It’s being called “the restaurant-as-dinner-party” trend.

Hmmm. Sounds kind of familiar, only it’s not being done at an area restaurant, but at Pete and Carol Heths’ home near Columbia. “We just love to cook,” says Carol. And, they have always loved sharing food and hospitality with their friends, many of whom were once clients, and colleagues. “We began by inviting a few friends for dinner,” Carol explains. Soon those core set of friends were suggesting other potential guests and, in turn, those guests began doing the same. Once-a-month dinners, which typically entail 12 to 14 guests, soon became the norm. “Sometimes everyone knows everyone else, sometimes it’s a room of total strangers,” she notes.

Everyone arrives bearing a bottle of wine to share. At the April dinner, kitchen designer Kevin Martin brought along a bottle of wine from the Kluge Estate Winery in Virginia that Donald Trump now owns. Kevin and his wife, Sherrill, also attended the Valentine’s Day dinner that included an uninvited guest: a terrible snowstorm. “I thought we were going to have overnight guests for that one!” Carol recalls.

Over the years Carol and Pete have tweaked the format of their dinners. The first change saw guests become involved in preparing the multi-course dinners. “We do all the prepping,” Carol explains, noting all the ingredients are purchased at Central Market. Once guests arrive, numbers are pulled and two-person teams are created.  “Guests are not allowed to work with the person they came with,” Carol points out. Teams then choose the courses they would like to tackle and go to work at their stations.

As for the menu, Carol and Pete devise each one after perusing the many cookbooks that Carol has collected over the years. The April dinner celebrated the arrival of spring. The June dinner, which is depicted here, paid homage to the Barefoot Contessa, Ina Garten, plus had a slight Southern accent. The weather allowed for the party to get underway with cocktails and hors d’oeuvres in the outdoor-living area. The entertainment included just-born calves teetering around the adjacent meadow under the watchful eyes of their mothers, and deer frolicking on the hillside at the back of the property. July’s dinner had a tapas theme and was held outdoors. “We don’t test any of the recipes,” Carol notes. “We just wing it and hope for the best.” According to Pete, “If it isn’t good, we blame the cooks!”
Oh, and Carol has a new rule for the dining table: Guests who arrive together are not permitted to sit together, as she feels it makes for a more lively dinner conversation. “People are either dubious or are all-in when they’re invited,” she admits. 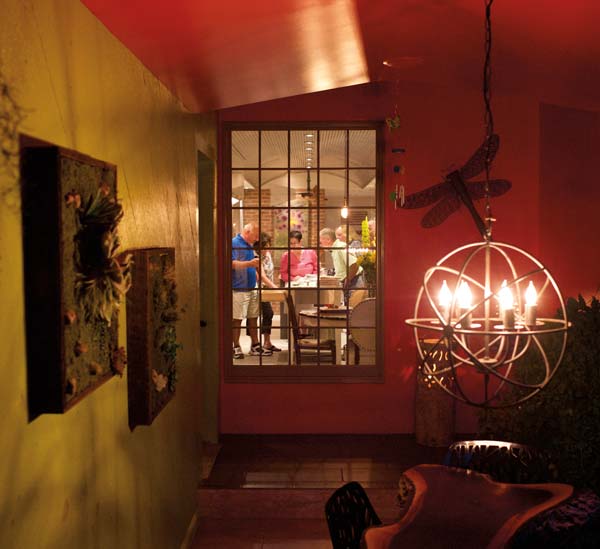 The Heths’ new kitchen provides ample space for the cooking teams to work.