Kevin Peters loves to deck the halls at holiday time. David Gelatt brings his artistic talents to the process. Together, they devise a theme that transforms their home into a Christmas extravaganza! 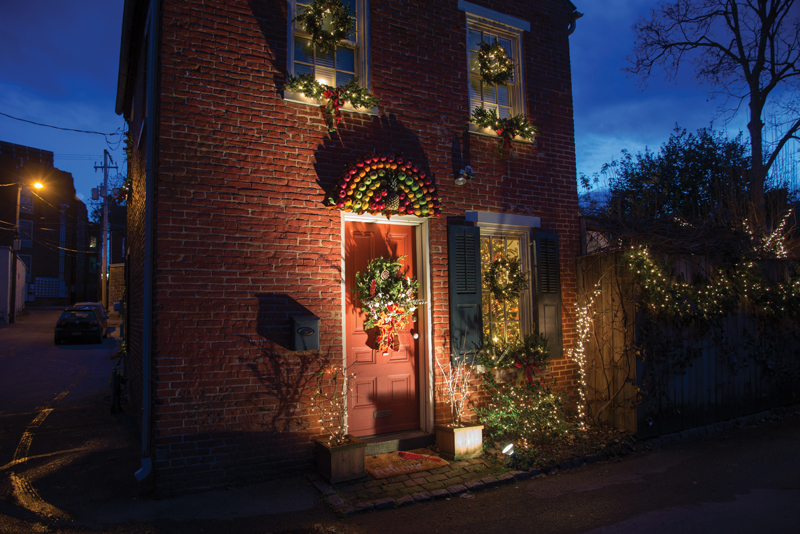 Kevin, who grew up in Manheim, has been “into Christmas” for as long as he can remember. He takes charge of the tree at his workplace, Wiley’s Pharmacy in Quarryville, and is the mastermind of the lighting display at his and David’s home on the East Side of Lancaster. “Our basement looks like the grid of an electric company,” David notes. Outdoors, more than 30,000 lights twinkle in the trees, on the garlands decorating the fence that encloses the backyard, as well as on the swags and around the wreaths (19 of them) that decorate the windows. What seems to be an equal number of lights illuminates the interior of their home. According to David, Kevin can spot a non-functioning bulb from a block away. Did I mention the lights are remote controlled? “It’s our gift to the electric company,” Kevin jokes. 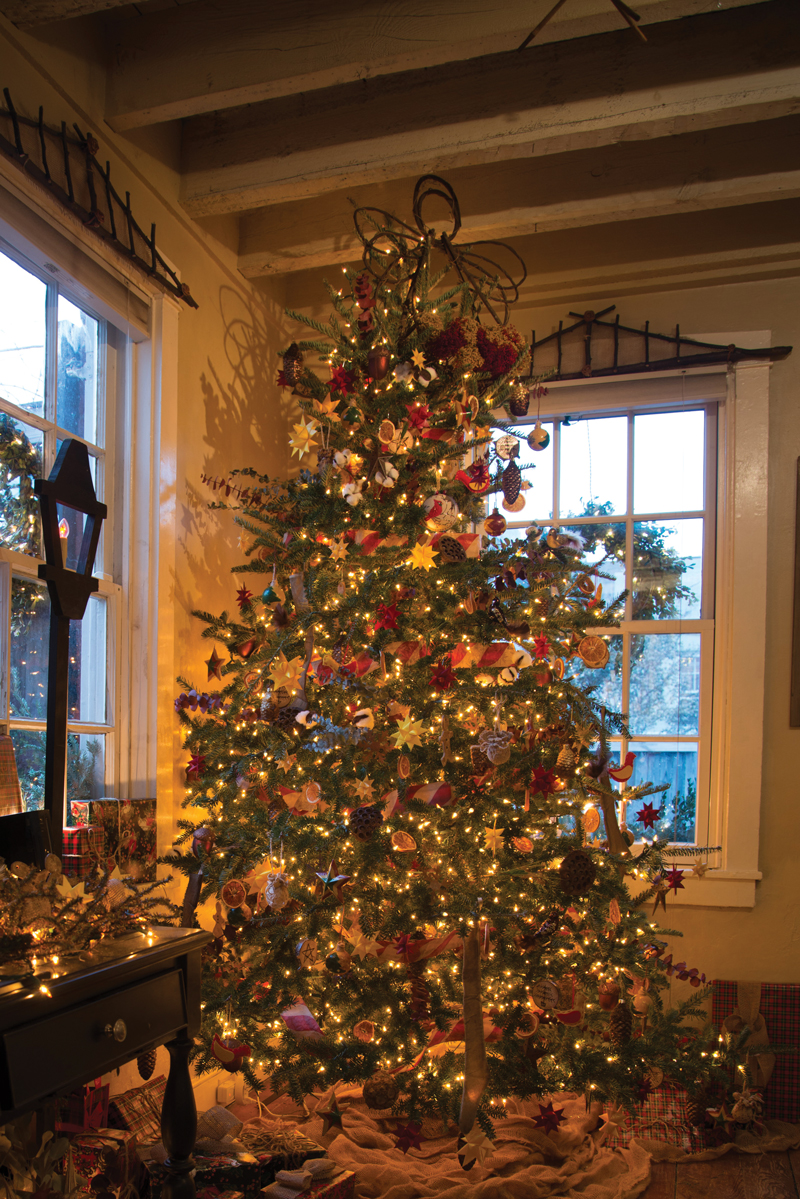 In order to get the always-ambitious project completed by the first Saturday in December, Kevin typically takes off the week of Thanksgiving and the week after. “We have to get it all finished in time for our wreath-making party,” David explains of the tradition that attracts neighbors and friends. Attendees are instructed to bring along the elements they want to include on their wreaths, while David and Kevin supply the frames, wire and cutters for their projects. The hosts also prepare a ham, and guests are asked to bring sides along to share. “It’s a lot of fun,” David says, noting that over the course of the last decade, they’ve only had to deal with inclement weather on one occasion. “We might have as many as 30 people here,” he adds. 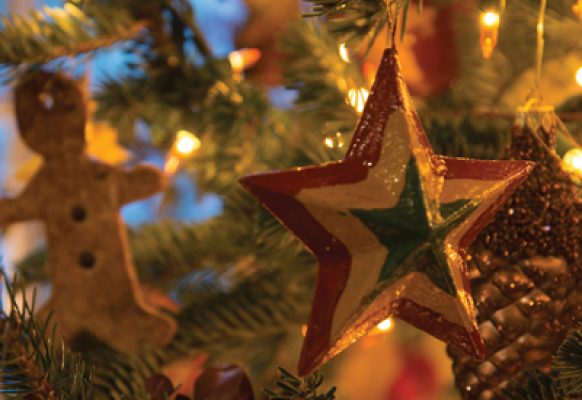 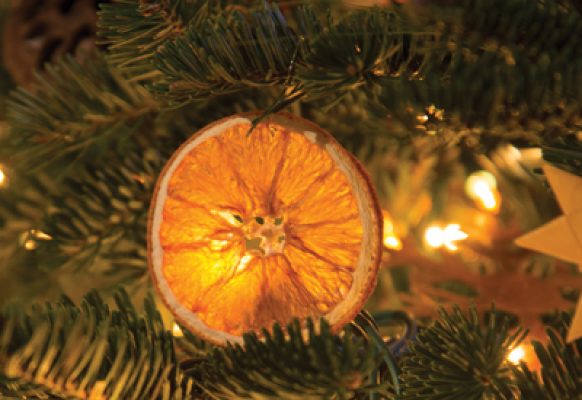 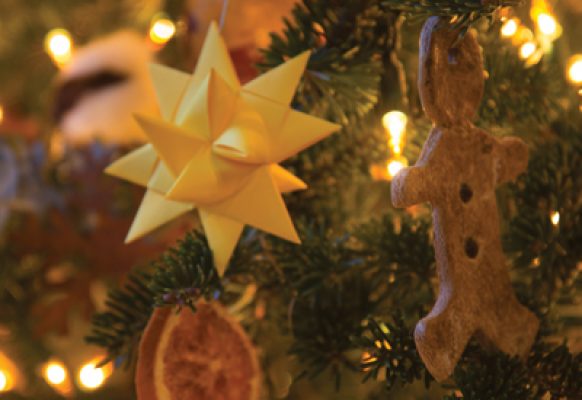 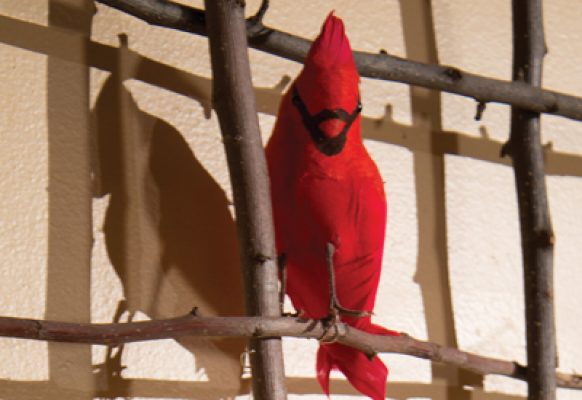 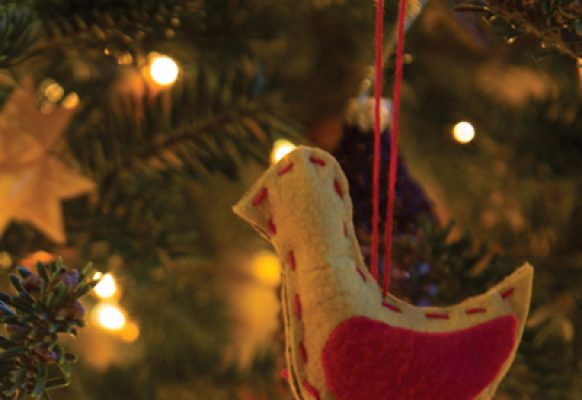 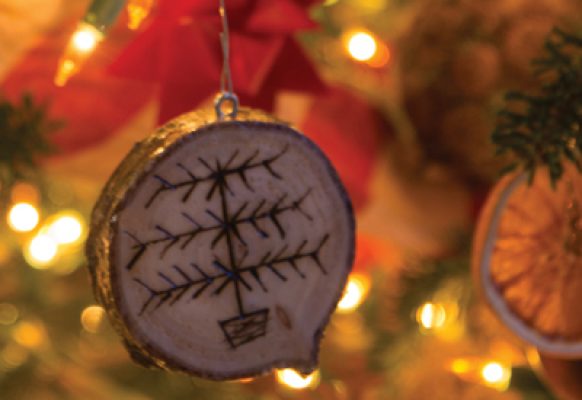 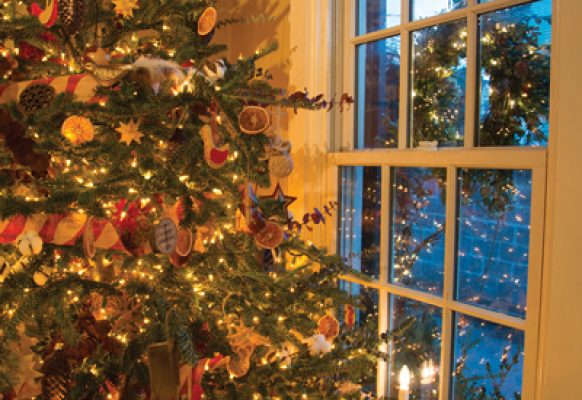 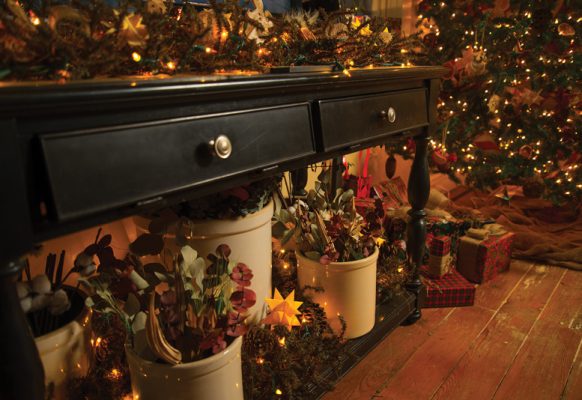 The two have settled into a decorating routine through which they devise a theme that is utilized for two successive years. Thus far, themes have revolved around the colors green and black & white. “Next year, it’s going to be purple,” David says. Another theme created a woodland scene.

Last year’s Williamsburg theme will carry into this year’s décor. “We went to Williamsburg to do research for this one,” David explains. While they expected to see the natural elements for which Williamsburg styling is known, they were surprised to see a tree bedecked with folk art at a museum they visited. “That really inspired me, but even with the natural elements, we saw things that we didn’t expect,” David says, referring to such things as pods, feathers and even oyster shells. 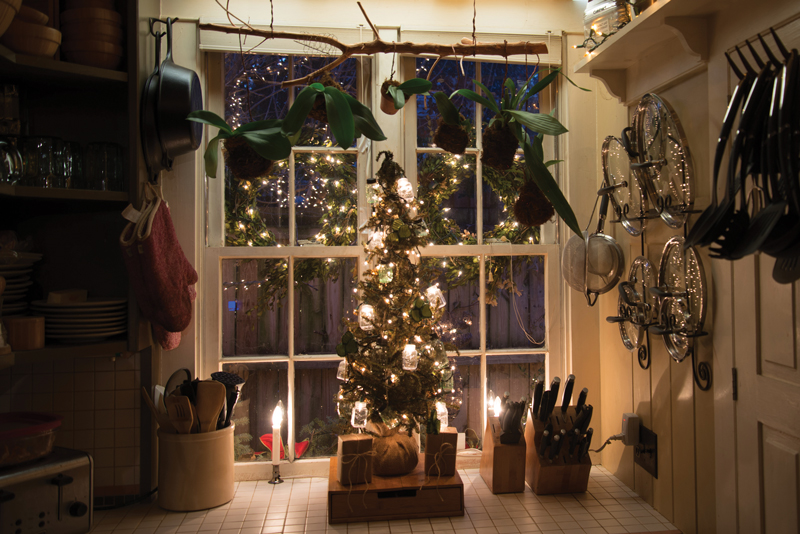 In August 2017, David began making ornaments. He created “stained-glass” ornaments by drying thin slices of oranges. Origami stars also abound – made from paper, he dipped them in shellac to give them a more aged appearance. He burned primitive images of trees into slices carved from the trunk of a Christmas tree. “That was Kevin’s idea,” he admits. Birds made from felt add to the folk-art look. Vintage doilies were wrapped and secured around gold balls. The handmade elements perfectly complemented the vintage ornaments that decorate the tree. 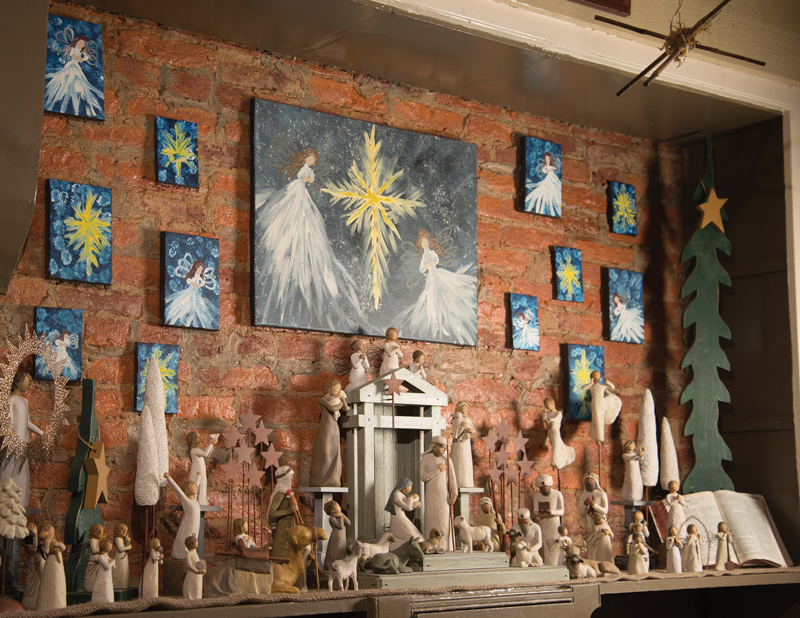 The final touch was adding amber lights to the tree. Again, the color tone complemented the theme and the period – late 18th century – in which their home was built. “Since this was a new theme for us, we started decorating right after Halloween last year,” David points out.

The Williamsburg theme carried into the outdoors with the design of the wreaths (all of which are crafted by David) and the welcoming fruit-and-magnolia-leaf fan over the front door. “The weather can really play havoc with that,” he says, referring to the fruit. “On warm days, you can end up with fruit salad on your doorstep.” 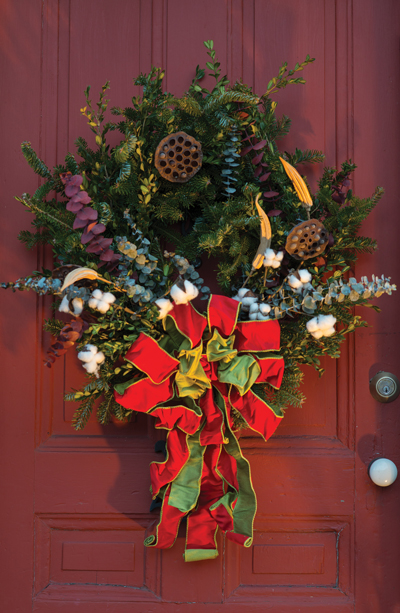 Natural elements also inspired David and Kevin indoors. Using found tree branches, David crafted a woven “quilt” that hangs on a wall. For the holidays, a colorful cardinal is added to the simple display. Looking for a way to use leftover twigs, the two devised a design over doorways and windows that mimics a manger. Twigs were also used to create primitive stars that hang from the ceiling.

Kevin’s beloved collection of Willow Tree figurines that comprise his very large Nativity also figures prominently into the display. One year he surveyed it and shared with David that it needed “something.” He had an idea – David could create some angel- and star-inspired paintings for the wall behind the display. The result is beautiful.

To whom does he credit his creativity? David names his mother, explaining, “I grew up in the middle of the Catskills. My mother, who was into cooking, canning, sewing and crafts, was self-taught. I think I get it from her,” he says. An accomplished cross-stitcher (as is Kevin), his new hobby is needlepunch.

In addition to the wreath-making party, December is a busy month for David and Kevin. The week before Christmas, the two host a dinner for Kevin’s family. “Twenty in this tiny space is tight,” David says of their home. “But, we manage and always have a wonderful time.” 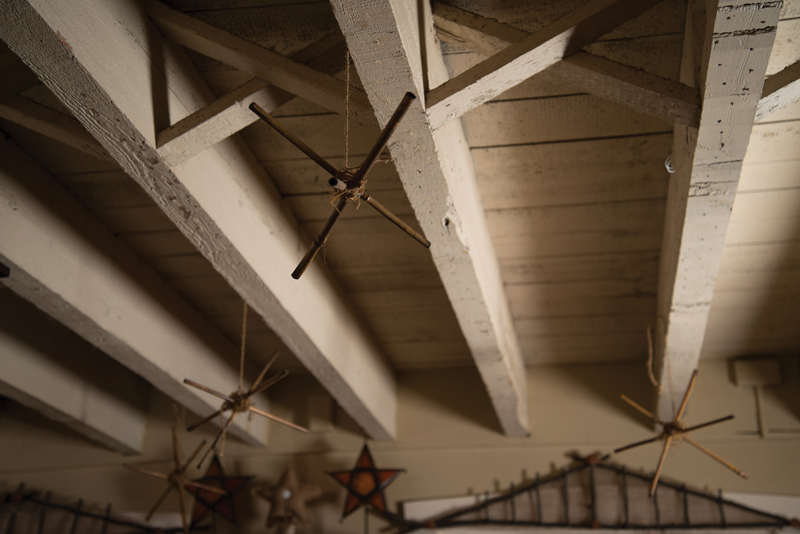 David is also the orchestrator of the flash mob that regales shoppers at Lancaster Central Market with their rendition of the Hallelujah Chorus on the Saturday before Christmas. “This will be our eighth year,” he shares. “We’ve had as many as 250 take part; it varies from year to year.” The event has grown so much that this year he has four people assisting him with rehearsals and logistics.

The mob consists of members of area church choirs, as well as people who have learned of it through word of mouth and simply enjoy taking part. “This year, we’re excited to have cast members from Dutch Apple participating,” he says.

In addition to Lancaster Central Market, the flash mob will be popping up at other places around town on Saturday, December 22. (Past locations have included Building Character, the Lancaster Marriott at Penn Square, Rachel’s Creperie, Binn’s Park, the Amtrack station and Excelsior.) David does share one tidbit. “This year, for the first time, we’ll be making an appearance outside the city.” 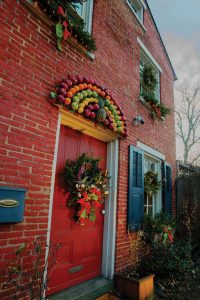 The famous Williamsburg holiday look dates to the mid-20th century. It was during the 1920s that John D. Rockefeller, Jr., his wife, Abby, and the Rev. William A.R. Goodwin began the effort to restore the town to reflect its Colonial roots. By the 30s, Colonial Williamsburg had become a tourist destination. Unfortunately, it initially lacked Christmas spirit at holiday time.

That changed when a Williamsburg look was devised that celebrated 18th-century English traditions (candles in the windows) and the natural beauty of the Tidewater area of Virginia. Somewhere along the way, designs that incorporated fruit (a luxury at Christmas in Colonial days) became a Williamsburg trademark.

The tradition continues. The famous decorations bring the spirit of the season to the grounds and buildings of Colonial Williamsburg, as well as to the quaint houses that surround them. What goes into the displays? According to The Washington Post, last year’s supply list included 2,552 wreaths (they go into production in September), 4,450 yards of pine roping and 79 cases of fruit (apples, lemons, oranges, pomegranates). Elements such as oyster shells, pods, feathers, grasses and plant matter are also needed.

According to Laura Viancour, Williamsburg’s director of landscaping, 40 degrees is the perfect temperature to maintain the fruit-laden décor. At higher temperatures, the fruit rots. At colder temperatures, it freezes and decays. As a result, the staff keeps Colonial Williamsburg looking picture-perfect throughout the season by simply replacing the fruit as needed. 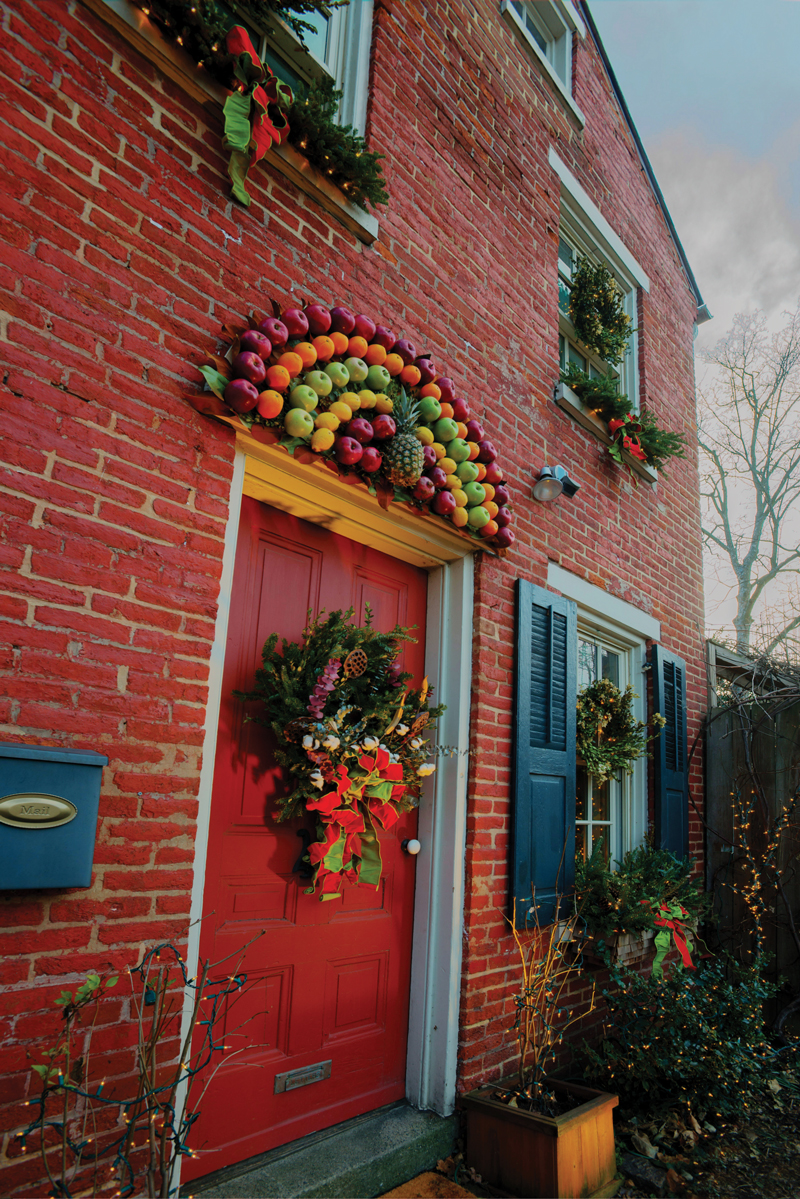