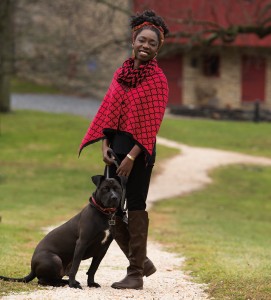 Hawa’s reversible black/red cape and infinity scarf are from Festoon.

Hawa hails from the North Shore in Massachusetts. Franklin & Marshall College brought the psychology major to Lancaster. During Hawa’s sophomore year, tragedy struck. Her mother died.  The Ghana native, who was once a stewardess for Pan-Am, had suffered a debilitating stroke. Complications led to her death. She was only 49 years old. “I had to go home and pack up the house,” Hawa explains.

Hawa returned to Lancaster and finished the school year. During her junior year, a fascination with photography prompted her to enroll in a studio art program. Her creative efforts were later rewarded with a first-place finish in 2013’s Expanded Visions exhibit (Lancaster Summer Arts Festival). XXC, which was taken from the series, The Last Frame, represented her film experimentations. A year later, she earned second place for Step One: Introduce Yourself, which came out of her How to be the Life of the Party series.

After her junior year, Hawa had to make some decisions. Paying for school became impossible. She didn’t feel compelled to return to Massachusetts. New York? Maybe. In Hawa’s mind, Lancaster had become home. “I had a great group of friends here,” she says. “I viewed them as my family.”

With the realization that Lancaster was her future, Hawa began exploring her options. In order to support herself, she worked at area restaurants and at Coe Camera Shop.

Having explored Lancaster’s art scene convinced Hawa that something was afoot. “I liken what’s happening here to what put New Hope on the map,” she says. “Artists are building a legacy here. Anything that comes out of Lancaster is worth something.” Realizing that “Lancaster is very much on its way” to becoming an art center, in 2010 she launched The Discerning Eye, a blog that covered Lancaster’s art scene. The following she developed convinced her that “Lancaster was ready” for what its artists have to offer. She also began curating shows at retail sites such as Seasons and the now-closed Roaring Brook Market. Pop-up shows also became her realm. Art had become her passion.

Her life was changing in other ways. Through one of her restaurant jobs she met her husband, Greg Good. “Nothing would be possible without him,” she says. “He believes in me.” Greg supported her dream of expanding the local art scene by opening an art enclave she envisioned as being an “incubator” for new talent.

She explains a path that was forged through her psychology classes and involvement in the art scene ultimately led to the Discerning Eye Center for the Arts, which makes its home on West New Street. Open since fall, the center enables member artists to share studio space, exhibit their work and literally “takeover” the space and help to plan scheduling during a designated month. She views the center as being a place where artists can receive support in a “realistic and tangible manner.” She also hopes that DECA can help expand the art scene beyond the downtown area and bring it into Lancaster’s neighborhoods, as well as encourage youth participation. “The ideas are endless,” she says, noting that in addition to art, the center has hosted music, films and First Saturday events.

Hawa is especially eager to help younger artists, women artists and unsung artists gain a foothold and grow in confidence.  “Support is everything,” she says and points to Clinton Reckart as an example. The collage artist, who often took part in the Center’s Sip & Snip events, doubted his ability until a famous collage artist bought one of his pieces. Now, he will be having a show at DECA in February. In March, PCAD’s senior class will be exhibiting their work at the Center.

Hawa and Greg have become city dwellers and live in a house that dates to 1792. A year ago, they welcomed a dog to the family. “I hadn’t thought about getting a dog, but I had a friend who moved to Philadelphia and was working at the animal control center,” Hawa explains. “She was always posting photos of animals that needed homes.”

A pitbull-Lab mix caught Hawa’s eye. But, she didn’t act on it fast enough, and the dog was moved to a shelter in the Allentown area. Hawa was able to track her down. Despite a medical issue (her back legs were injured due to being kept in too small a cage) and an aloof nature, Hawa adopted her. “She’s doing good now,” Hawa says of two-year-old Mulan. “I think that’s a perfect name,” she says, referring to the warrior princess of Chinese lore who was made famous in a Disney film. “She can be a bit of a diva, but I love her and she loves me back. She motivates me to exercise. And, she’s my protector. If we’re walking down the street, people cross to the other side!”

Exercise is part of Hawa’s healthy-living strategy. “My mom’s death was a wake-up call,” she remarks. “She had high blood pressure. For a while I completely avoided salt.” In addition to walking Mulan, Hawa enjoys running, hiking, yoga and dancing. She relies on natural remedies and makes an effort to eat well. “Between our schedules, that can be difficult,” she notes.

Despite not earning a college degree, Hawa maintains that life is filled with educational experiences. “I had a tough ride, but you do what you need to do to survive and succeed,” she says. “And, you learn along the way. Working with artists has been educational. The best part of my business has been seeing all the young artists come out of the woodwork.” And, she’s continuing with her own artistic expression:  Her photographs Step 1: How to be the Life of a Party and XXA and XXC (both from the series The Last Frame) are on exhibit at the Women’s Center at F&M.

Discerning Eye Center for the Arts is located at 12 W. New St. in Lancaster. Visit DECA-PA.com.

The statistics speak for themselves: