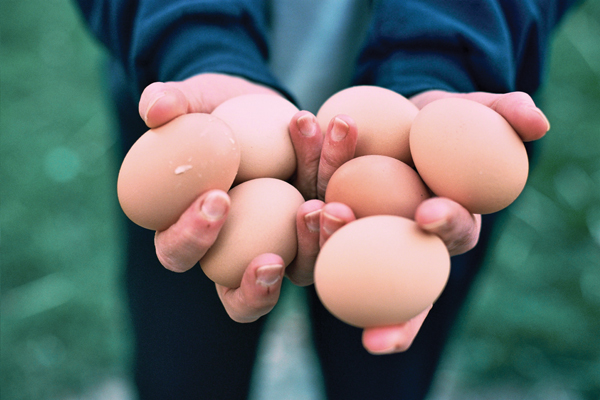 A growing number of folks are returning to the age-old tradition of raising backyard chickens. It’s a curious hobby that a number of my friends have adopted. From a culinary perspective, having fresh eggs on hand is almost certain to enhance your menu, but what else does it bring to the table? I set out to discover which came first, the chicken or the egg?

In pursuit of answering that question, I spoke with about a dozen other folks – from all over the world through the magic of the Internet – who raise chickens in their backyards. From the general consensus of backyard chicken raisers, I’m told the satisfaction one derives from raising a healthy flock is quite rewarding. Whether you provide eggs to your family, friends and neighbors, trade them for the extra tomatoes from their gardens, or resell them to help offset feed costs, all contribute to that sense of pride.

In quizzing many folks about why and how they got into keeping backyard chickens, all shared amazing feedback, which I needed to revisit in person. To do so, I crossed the mighty Susquehanna River into York County to visit with friends Robin and Jeff Cannon. While too humble to admit it, they’re primo backyard chicken experts and were kind enough to share what they’ve learned.
Their current flock started out nearly six years ago with nine, two-day-old peeps from The Mill of Red Lion. The chicks were kept warm under red heat lamps (first in the house and later in a pen in the barn). The temperature they should be kept at varies and reduces gradually as they mature. Eight of the chicks grew into healthy adults, and six of “the girls” remain to this day. 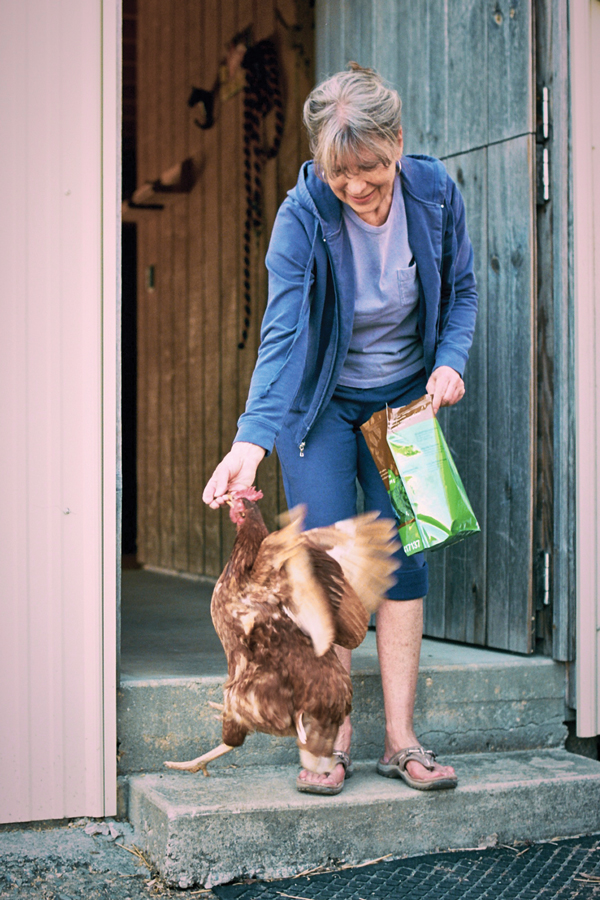 The Cannons’ chickens are quite social and, being pets, they crave attention. That came as a complete surprise a few years ago as I spent more time around them and noticed that individual and flock personalities quickly emerge. Adorably, the Cannons’ chickens are often named in pairs. Lucy and Ethel, Laverne and Shirley, all harkening back to classic sitcoms. Watching them bob about as they run around is hilarious, an extremely different type of chicken soup for the soul.

March or April is the best time of year to begin raising chickens, and Robin will tell you it’s important to define your goals before starting. “You have to commit to what you’re going to do when they stop laying eggs,” she says of either keeping them as pets or rotating the flock. If you plan on raising chickens primarily for eggs, you’ll need to rotate the flock every two years, as hens age and egg production starts to decline. That means either finding them refuge or adding them to the stew. For many, it’s difficult to justify the cost of supplies and the vet when chickens are no longer able to lay eggs on a regular basis. If they’re pets, as in Robin and Jeff’s case, eggs are simply a bonus. At more than 5 years old, all still lay eggs, though not every day. “Ours are pets. I want them to have a good life. I want them to be able to free range,” she notes. 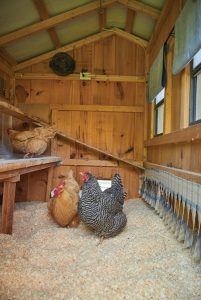 When choosing specific breeds of chickens, be aware that certain breeds are kept for meat, as they’ll reach a larger weight quickly. Other varieties are bred to be dual purpose, for meat and eggs alike. It takes about the same amount of work to take care of a couple chickens as it does for a dozen. Depending on the size of your household, three to four chickens is a nice minimum and will produce as many eggs per day once they’re at about 10 months old. 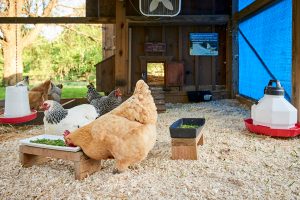 Select breeds are cold hardy, while others can better adapt to the heat. Lucy and Ethel, for instance, are Buff Orpingtons and do well in this climate. They have single combs at the crest of their heads, which are more prone to frostbite. Proper ventilation in the coop will keep moisture out, thereby preventing frostbite. Laverne is a Barred Rock or Plymouth Rock chicken, one of the most popular domestic breeds as they’re friendly pets, cold-weather tolerant and dual-purpose chickens.

Within those breeds, according to Robin, a few are more prolific egg layers. Goldie was “an egg-laying machine,” Robin says of a hybridized Golden Comet hen who laid eggs daily for two years year-round. The Red Star is another hybrid breed. Personality wise, they are typically the sweetest chickens as pets. Sadly, they often end up with health (internal organ) problems because of the physical stress of laying so regularly. 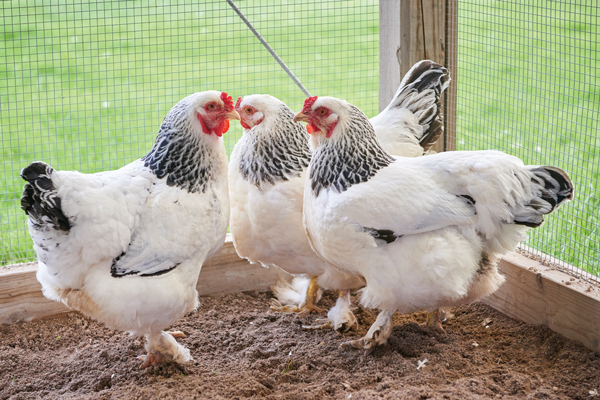 For home gardeners, benefits include tick, bug and even rodent control. The compromise with free-ranging chickens is that flowerbeds can quickly become uprooted, turning into dirt baths for chickens. Good hygiene is imperative, as the ammonia in the waste can attract bugs if not maintained properly.
For children, keeping chickens is an excellent tool for teaching responsibility. They can help with simple, daily tasks such as collecting eggs, morning and evening feedings, and making sure they always have fresh water. 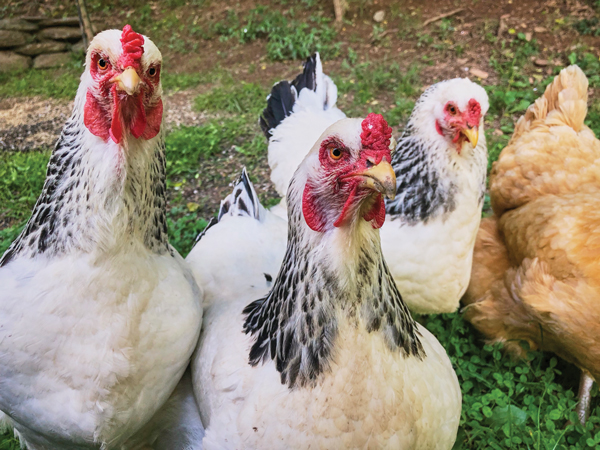 In this area, hawks, eagles, foxes and snakes are among the biggest threats to a flock. Pets, including cats and dogs, should also be considered. Roosters, while loud and often a noisy nuisance to nearby neighbors, can be effective security guards. The Cannons once raised a rooster named Wido who fought a fox to his own death, protecting the flock who otherwise would have seen certain demise.
Another friend mentioned that keeping a rooster quickly became complicated. One day, his children got between the rooster and the two hens, Butterscotch and Spot, which sent the rooster on offense. The habit continued over time, even with adults, and the rooster was eventually sent to live on a farm.

Speaking of roosters, they are not necessary for hens to lay eggs, but they are if you want to raise chicks of your own without buying from a hatchery. For eating eggs with a rooster around, you’ll need to hold eggs to a flashlight to see if they are fertilized, which is denoted by veins and a dark spot that is the embryo. 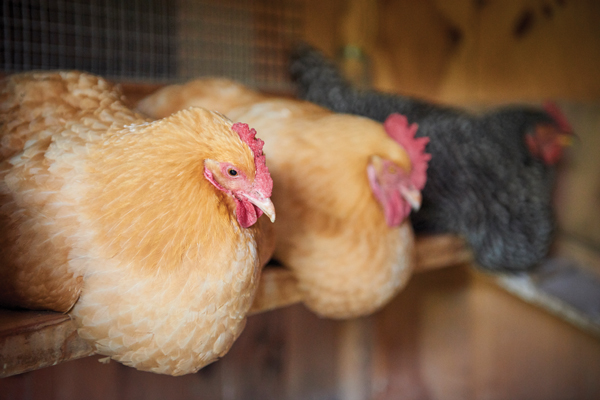 Robin and Jeff feed their chickens with dried mealworms, spinach, grapes, corn, peas, cucumbers, tomatoes, vegetable table scraps and feed. As a treat, they will be given Greek yogurt, ramen noodles, corn on the cob and cabbage heads. Running wild, they’ll eat bugs, worms, grubs, grass and wild berries. They’ll go after snakes and even rodents, adding to the list of pests they’ll help control.
It takes time to produce an egg, typically around 28 hours, so every week there’s a day they’ll often skip. Hens will sound the alarm anytime they lay an egg. On one particular visit to the Cannons, the hen “Baby” laid an egg and carried on for some time until Robin’s mother, Dana, went over to acknowledge her triumph. 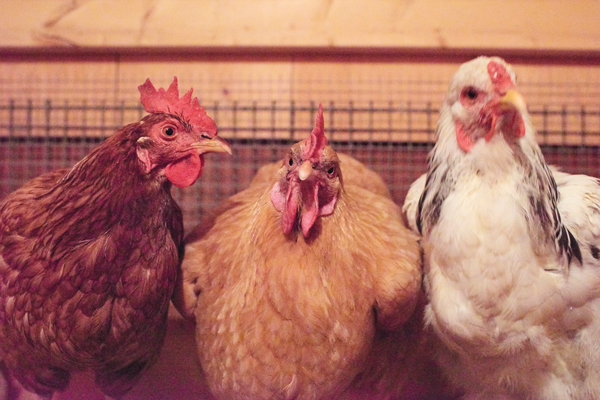 In the cold winter months, egg production will typically slow down or stop regardless of age. If you’ve ever wondered why farm stands charge more for eggs in winter, now you know why. 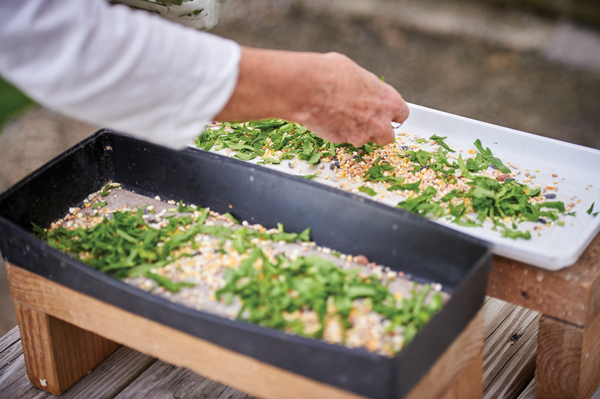 The Cannons’ 8×5-foot coop is Amish-made. It is designed for more chickens, but the original eight hens took up the whole row when roosting. There is a pecking order – the chickens tend to line up in an order that minimizes internal conflict. A 3×3 square-foot space per chicken is healthy, but 1×1-square feet is fine if they have outside access. Jeff and his father-in-law, Dick, built the 12×12-foot run that is attached to the coop. They wrapped it in 1/2-inch hardware cloth and dug 1-1/2 feet underground to keep foxes from burrowing into the coop. Coops should be inspected regularly for moisture and intruders. They should also be cleaned daily, while checking the chickens for mites as well as wounds. 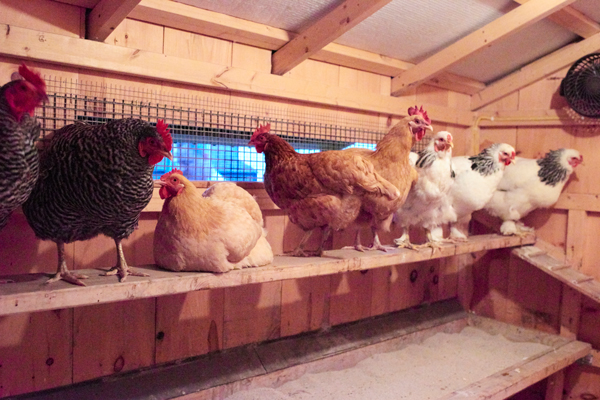 Their run has a number of interesting features including electric for lighting, fans for the summer and heated water for winter. A dirt bath is crucial for keeping bugs at bay and helping the chickens cool off. They need a place to scratch, and adding food-grade diatomaceous earth to a dirt bath will help to keep feathers clean and control bugs and parasites.

Free-range chickens and flowerbeds often don’t mix, but their endeavors to find places to scratch will probably lead them there. Sweet PDZ, typically found in horse stalls, is used in the coop waste tray for added hygiene. Adding probiotics to feed and electrolytes and apple cider vinegar to the water will also help maintain a healthy flock. 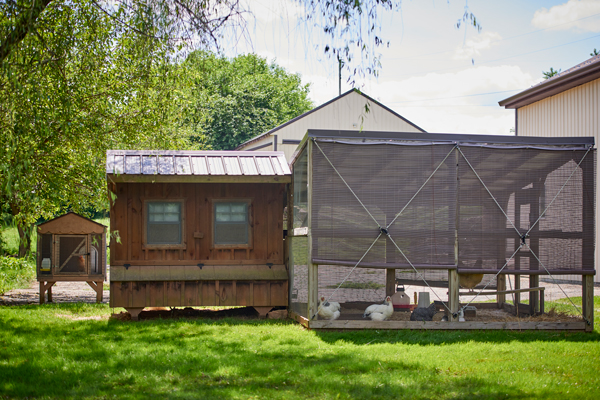 With a bounty of fresh eggs at your disposal, the next question is how do you use them? In American cooking and particularly in baking, eggs are a staple. I have a hunch that older baking recipes called for more eggs than necessary simply because they needed to be used. 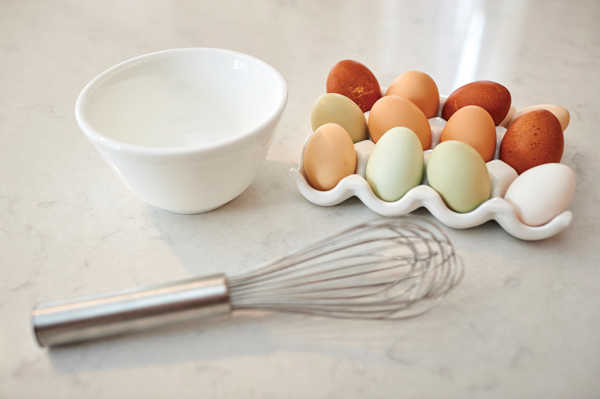 Eggs from free-range chickens, as compared to those commercially produced, are no contest on freshness and quality. What chickens ingest changes egg color and arguably flavor. Chickens that live on a diet largely based on grain feed will have pale eggs. 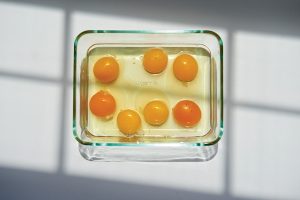 You’ll also notice the yolk color is different. The first time I cracked one of the Cannons’ eggs, I was immediately concerned. The color was a deep orange-red, like nothing I had ever seen before. After making a quick phone call, I was assured that was perfectly expected and without a rooster, the egg was certainly unfertilized. It was incredibly eye-opening compared to the almost anemic-looking eggs I was used to. I can’t definitively declare that taste is better, but I’m convinced the quality and nutrient content is dramatically improved. 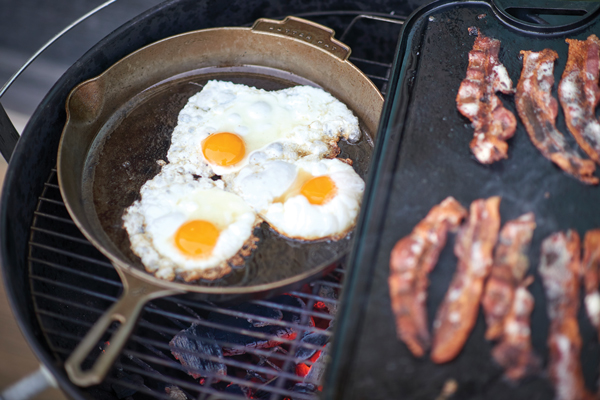 It’s easy to buy local and move away from factory farms with a little extra cost, if any. Within walking distance of our home, there are three sources for local eggs. Of those sources, one has free-range chickens immediately next to the roadside stand, so you know exactly where the eggs are coming from. Unfortunately, our neighborhood HOA would be a barrier to raising chickens, but at $2.25 a dozen and usually with inventory in stock, the surrounding neighbors offer a pretty sweet deal. 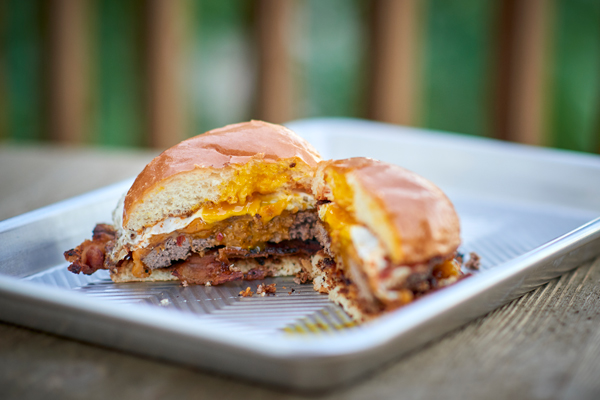 There are countless delicious uses for eggs: frittata, homemade pasta, meringue, eggnog, pancakes, omelets, custard, ice cream, creme brûlée, deviled eggs, quiche, egg salad, French toast and the list goes on. Aside from soft-boiled in ramen noodles or in Vietnamese egg cakes, my favorite use is less conventional: sunny side up on a burger with sriracha and pepper jack cheese on a brioche bun. Jeff says their eggs are best over easy.

From a personal perspective, I value this connection to our food sources. I’m grateful for the opportunity to closely consider the link with the chicken and the egg, regardless of which came first.

For additional resources, check out backyardchickens.com and mypetchicken.com. 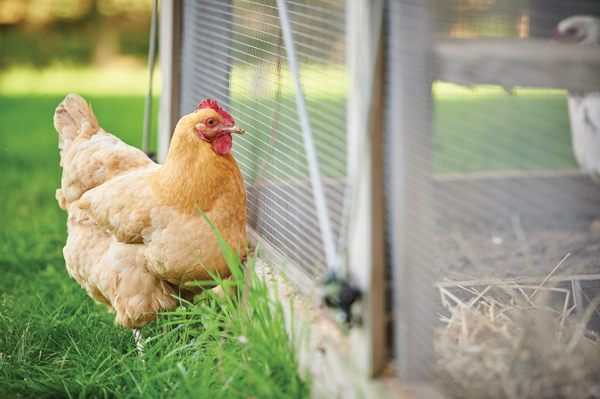