The son of a generations-old, deeply rooted Lancaster family returned home to join the family business just in time to celebrate his 50th birthday with a party that brought his web of friends — past and present — together for a night of toasts and roasts.

Dave Groff loves a good party, and he’s seen a few. Having worked in special events management and corporate sales for the Chicago Bulls, Phoenix Suns and Wayne Gretzky’s Phoenix Coyotes, Dave has reveled in some major-league, big-city celebrations.

Dave is among the siblings of the venerable Groff family, whose 125-year legacy in the funeral home business is now in its fourth generation. After building a storied career in the marketing and promotion of professional sports, Dave has returned to Lancaster to join his sister, Lisa Groff, and other family members in continuing the family business.

After a 25-year absence from the local scene, Dave was returning to a newly refreshed hometown. While many old friends remain, many new faces on the business and social rosters have yet to be connected. Not a problem for the gregarious Dave Groff; they’re simply friends he has not yet met.

With a theme of  “Dave’s Twist, Toast & Roast,” his 50th birthday bash was a reflection of the fun-loving, athletic guy who attracted friends like a magnet at The Hill School and later at Denison University. It was only fitting that three fraternity brothers – who remain best friends some 30 years later – brought their best memories for some good-humored roasting of “Brother Groffy” before concluding that he is the “heart” of their connection, where “all roads lead back to Groffy.” Tom Powers said to the crowd, “It’s important that you know who is coming back to your community. He is principled, driven, kind and loving.” 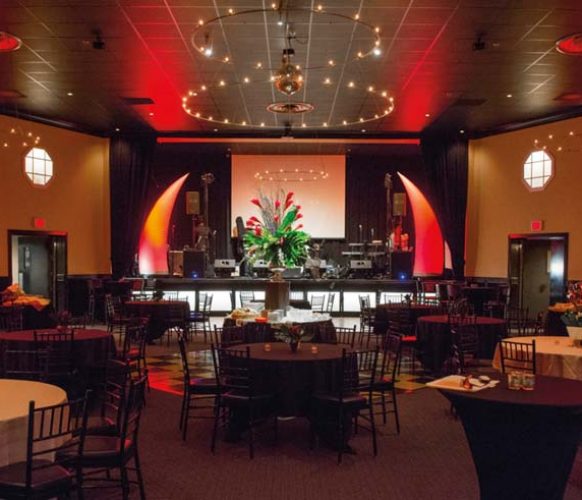 As a nod to Dave’s career as special events manager for the Chicago Bulls, the stage was flanked with huge, inflatable red horns. The Hamilton Ballroom’s neutral walls were enlivened by uplights, washing the room in vibrant red. Bold arrangements of tropical flowers completed the decor. 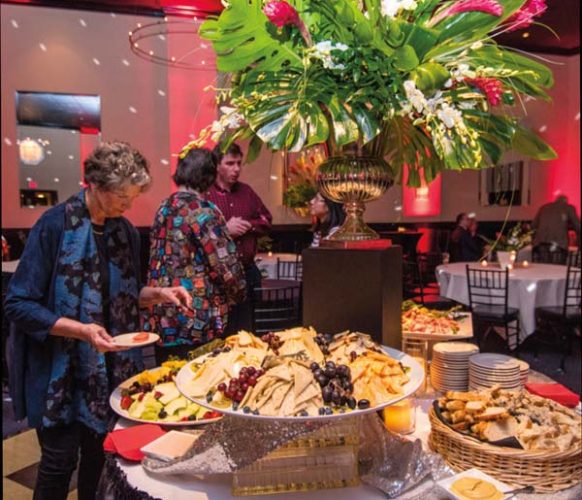 Stations were filled with a variety of delectable offerings from Greenfield Catering. 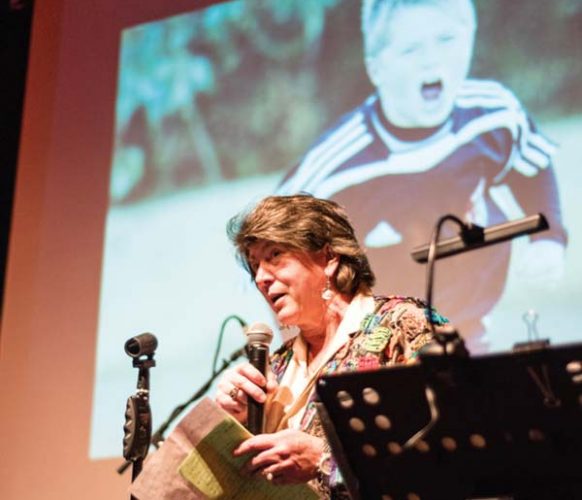 Lisa Groff was among the guests who toasted/roasted Dave. 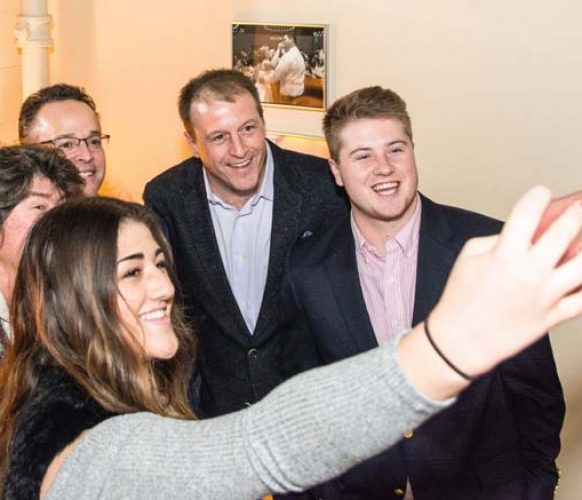 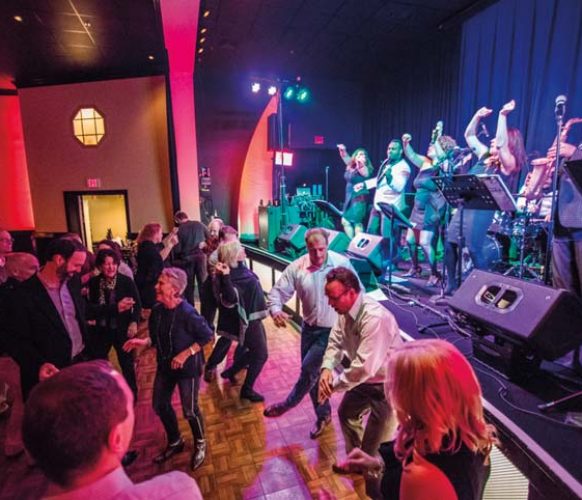 The dance floor was jumping! 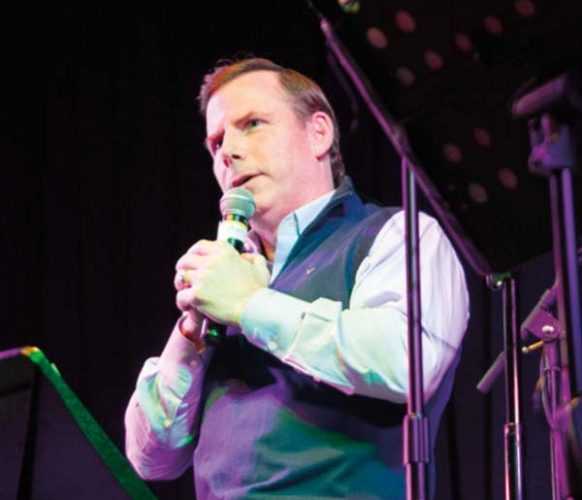 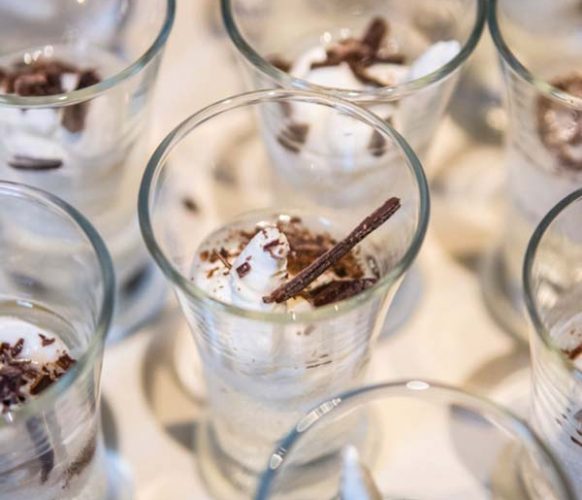 Let them drink cake! In lieu of a traditional birthday cake, shots of cupcake vodka, layered with whipped cream and chocolate shavings, were the toast of the night. 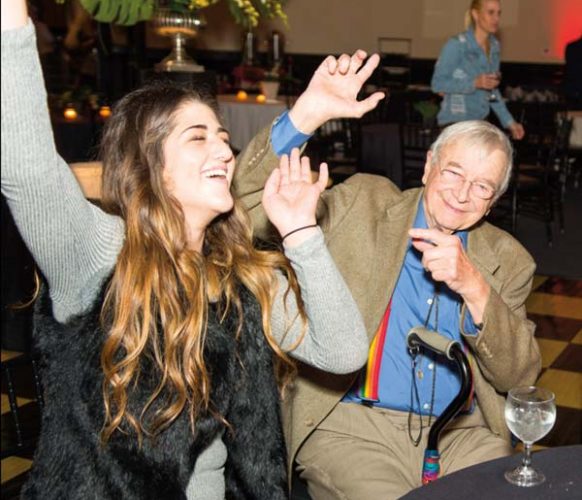 Sydney and her grandfather, Bob Groff, groove to the music. 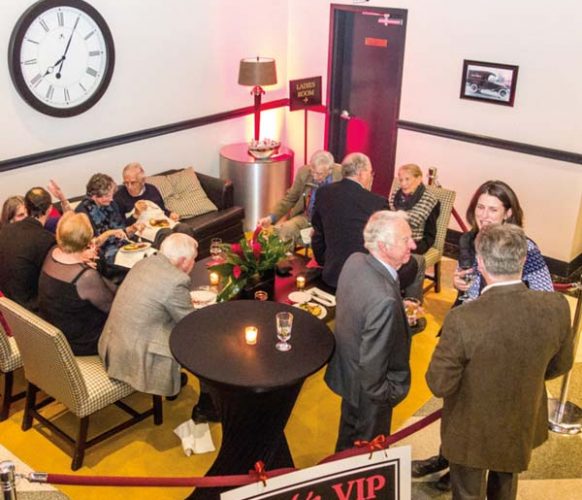 Dave provided his father, Bob Groff, with his own lounge that was more conducive to conversation.

The roasting had just begun! A fourth Denison University fraternity brother was waiting backstage for his turn at bat. Professional stand-up comedian Tom Cotter, who was a finalist on the seventh season of America’s Got Talent, as well as appearing on Last Comic Standing, brought his rapid-fire style to delivering the goods on Dave Groff the academic (“He was a history major with a 3.0 – GPA or blood alcohol level?”) and the guy (“Junior year he studied abroad – her name was Lucy.”). Cotter dialed up the roasting temperature another 100 or so degrees, entertaining the crowd with a Vegas-worthy routine.

The “Twist” in the birthday bash theme was an eight-piece band that rocked the Hamilton Ballroom and kept the dance floor filled, led by local rock star vocalist Amy Banks.

Early in the evening, the Groff siblings, Lisa Groff and Tim Watt, offered greetings and toasts from the family, revealing sweet, funny family moments and the depths of joy that Dave brings to the Groff family gatherings with his creative, witty ways.

Blessed with a father who is in his 80s, Dave recognized that his dad would appreciate a quiet zone, where conversations could be enjoyed without shouting over the band’s non-stop playlist of dance music. Bob’s VIP Lounge, marked as a specially designated area for Dave’s dad and his peers, was a popular spot, and a gentlemanly way to honor his father while still creating a high-energy party for Dave’s contemporaries.

While thoroughly roasted, the birthday boy’s night was also seasoned with many touching comments. “We are here to give you back Dave Groff,” fraternity brother Tom Powers addressed the crowd.

“He will be a large presence in your community, the way he has been in our lives.” To which we say, “Dave Groff, welcome home!” 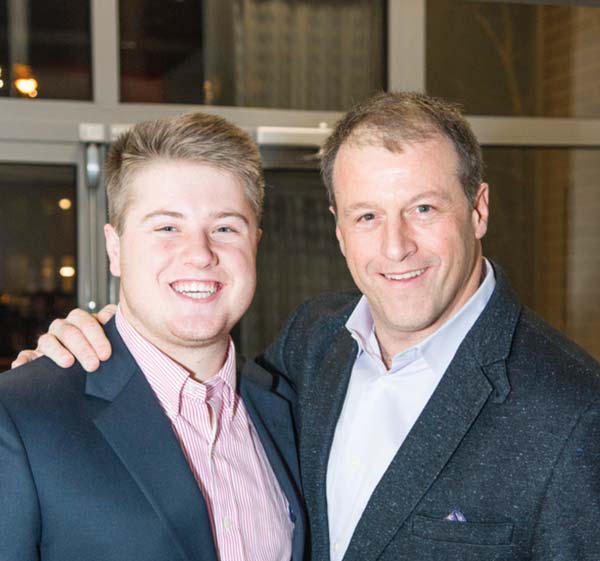 Dave and his son, Tanner.