Hershey is known as much for its chocolate confections as it is for its action-packed theme park. With its signature Kiss-shaped streetlights, Hershey is also home to some amazing restaurants, the iconic Hershey Theatre and The Hotel Hershey. Last but not least is Hershey Gardens, which stands as one of Milton S. Hershey’s enduring legacies.

“We’re known for our roses and tulips in spring. People also enjoy the great views – we’re perched on a hilltop overlooking the town of Hershey and Hersheypark, and there’s also an amazing view of The Hotel Hershey,” says, Mariella Trosko, director of Hershey Gardens.

The garden’s history is deeply rooted in roses. Milton Hershey strongly believed in giving people in “his” town a beautiful place to live. In addition to carrying out this idea in planning the town, he also designated a plot of land near The Hotel Hershey for the Hershey Rose Garden. The 3.5-acre garden, which was filled with over 12,000 rose bushes, opened in 1937. Since then, it’s grown to more than 23 acres and includes theme gardens as well as a fun and educational children’s garden. 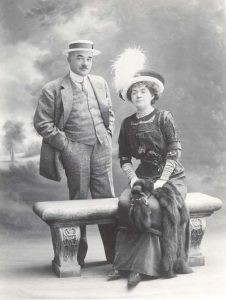 As part of its 75th anniversary celebration in 2012, the M.S. Hershey Tribute Garden was unveiled. Located at the north end of the gardens, it honors its founder’s love of horticulture and showcases the revitalized M.S. Hershey Rose.  In 1940 the American Rose Society honored Milton S. Hershey’s support of roses by naming a rose after him. The following spring, the M.S. Hershey Rose was introduced at Hershey Gardens.

According to Mariella, bloom time for the gardens’ roses peaks in June. And, there are plenty of roses to see – about 3,500 plants representing 275 varieties including old garden roses, which are located in an area called High Point Garden. A tribute to Milton Hershey’s wife, Catherine, it honors the garden at their home, which was named High Point.

“Spring and summer are the perfect times to visit the gardens,” Mariella notes. Other garden attractions – from late spring and into fall – include the trees in bloom (in the fall, they sport blazing autumnal colors), the wide variety of annuals and perennials, and the herb garden. 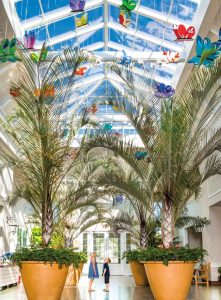 Last year Hershey Gardens unveiled its newest addition – the Milton & Catherine Hershey Conservatory. The 16,000-square-foot conservatory not only makes the gardens a year-round destination, but it’s also the only structure named for both of the Hersheys. The design was inspired by a conservatory that was built at High Point in 1909.

“The conservatory is a recent addition that wasn’t in the original plan for the gardens, but its placement is so perfect that it looks like it was meant to be there. There are panoramic views of Hershey from the entrance terrace and sweeping views of Swan Lake, the rose garden, gazebo, seasonal displays and Hotel Hershey from the rear,” Mariella says.

The gardens’ conservatory features a welcome center for guests, gift shop, a butterfly atrium, and an educational and horticultural wing, which also hosts exhibits (such as a recent regional orchid show) and special events such as weddings. 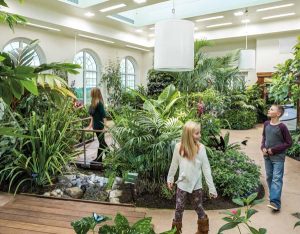 The Butterfly Atrium makes its home in the conservatory.

The butterfly atrium expands on the seasonal butterfly house that had been located in the Children’s Garden. Not only has the butterfly atrium become a year-round attraction, but its area of focus – North American butterflies – has expanded to include tropical species. Dan Babbitt, associate director, notes that Hershey’s butterfly atrium is one of only 25 in the U.S. that are open year-round.

The atrium mimics a tropical oasis and features palm trees and tropical plants as well as a delightful water feature. There’s even a cacao tree. “It was really exciting to have this tree here. Its pods are used to make chocolate, so it’s a fitting addition,” Mariella remarks. “We can show people where cocoa comes from,” Dan adds.

Walking among the butterflies and having one or two land on you is an enchanting experience for both the young and the young-at-heart. Oohs and aahs abound as guests view the exotic winged creatures – some in bold colors and others more subdued. Dan says that butterfly species in the atrium change regularly and may include the Atlas moth (the largest moth in the world), the brilliantly colored blue morpho, Great Mormon, paper kite or the leopard lacewing. “It’s a unique experience; guests can see butterflies from around the world in one room. We’ve tried to recreate as much of a natural environment for them as we can,” he says. 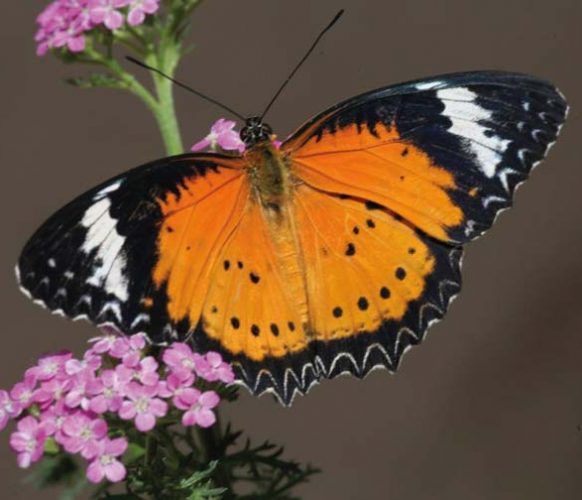 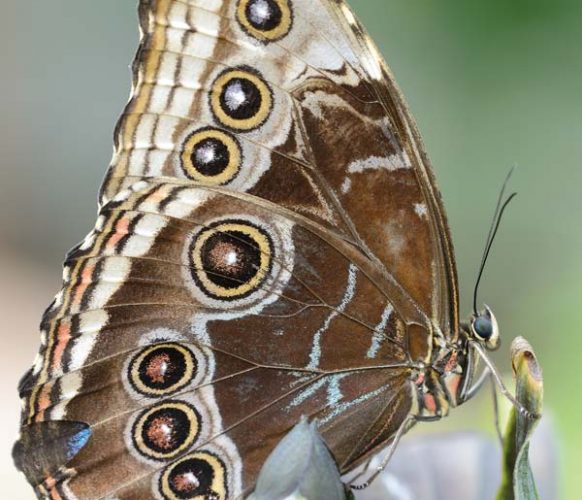 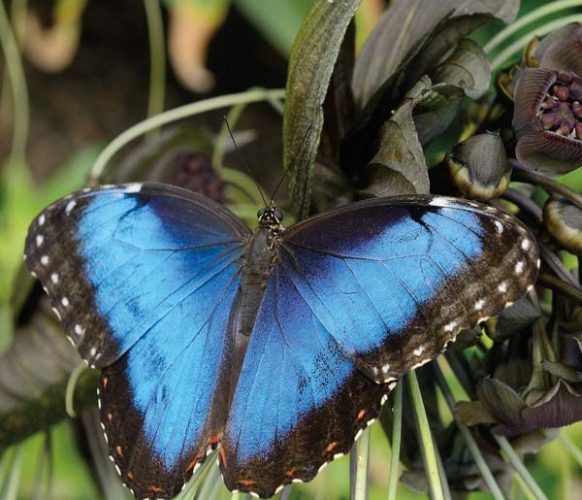 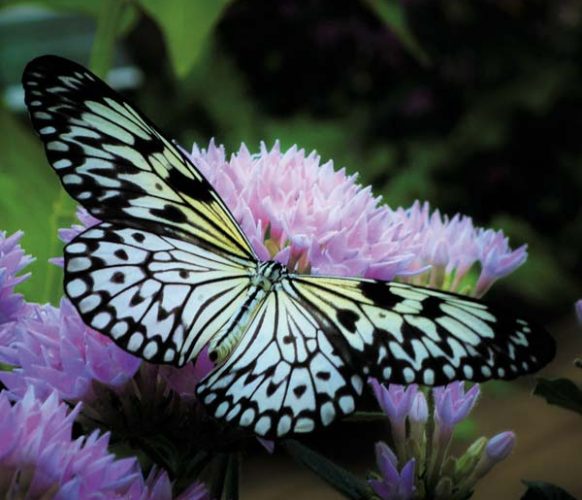 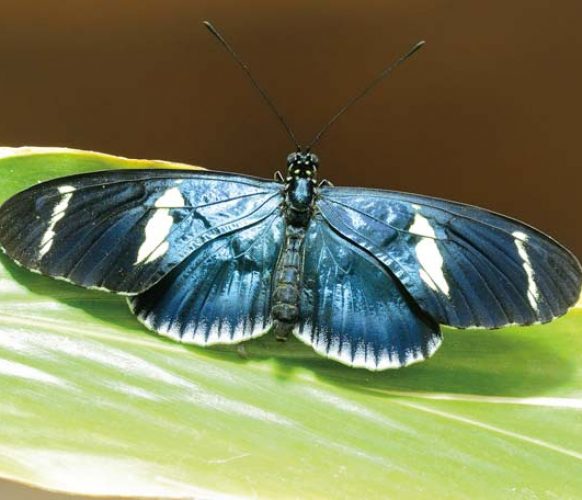 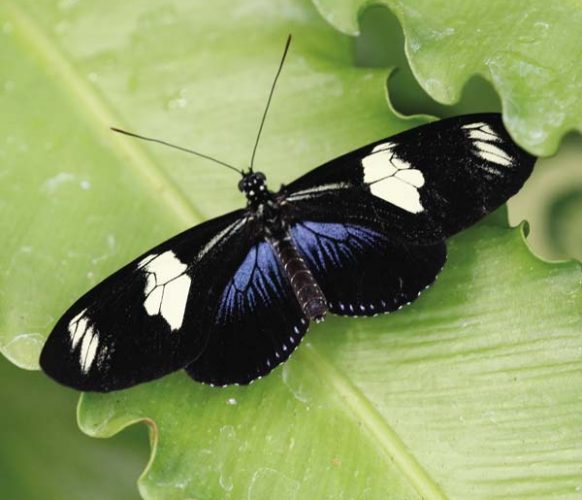 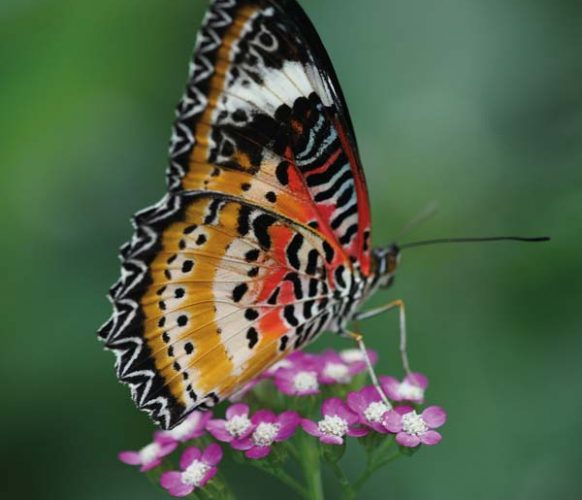 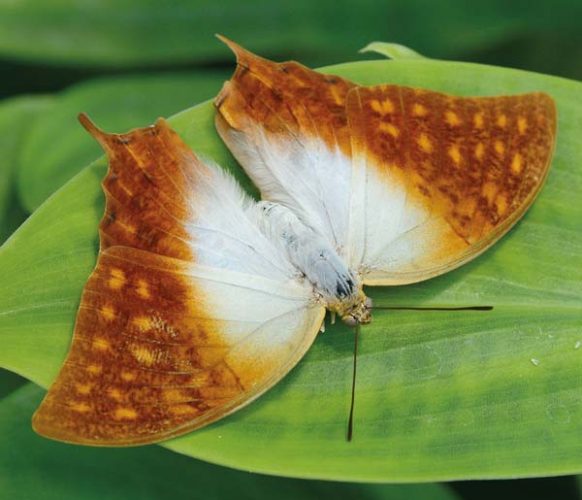 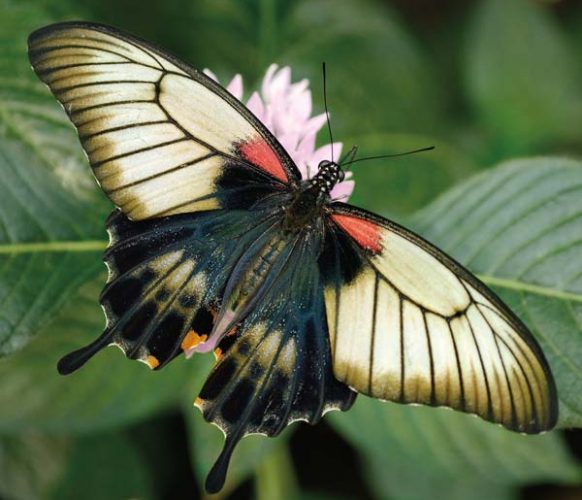 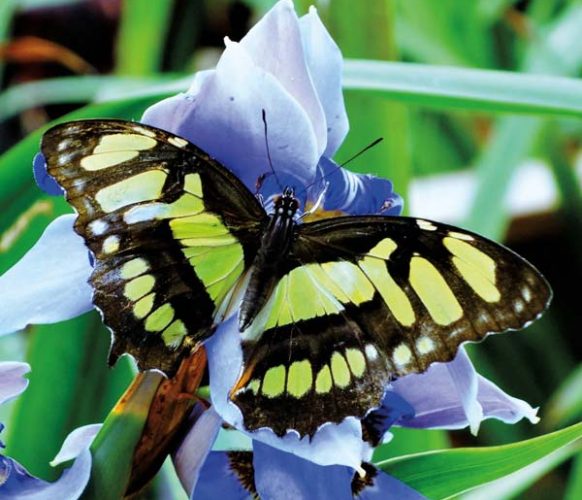 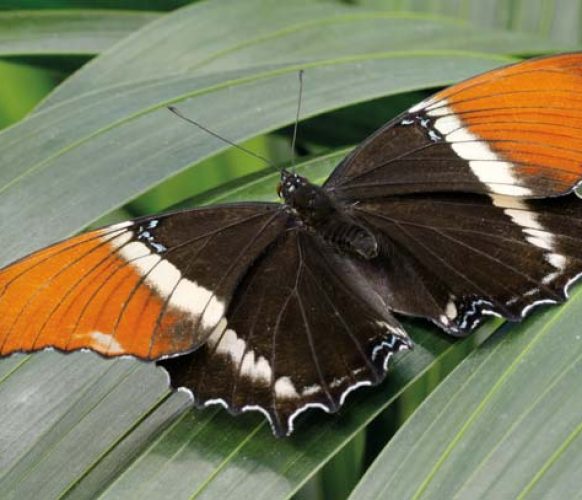 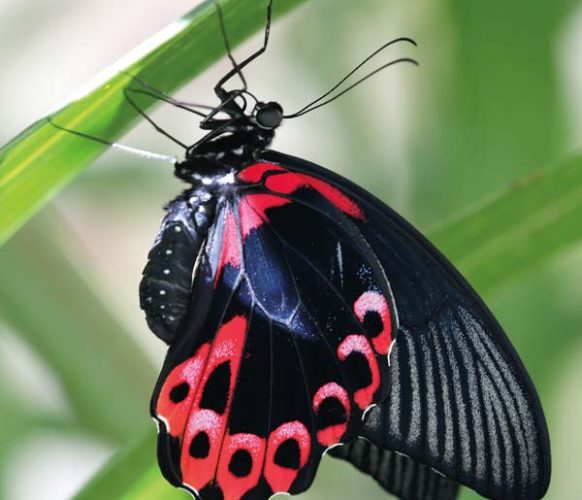 The atrium also features a chrysalis cabinet that allows visitors to watch butterflies emerge from the chrysalids. “We can now reach people year-round, and that’s allowed us to expand our education programs, including those that focus on the plant and insect connection,” he explains.

There’s even a space called “the bug zone” that features a rotating display of bugs. One recent display featured insects that mimic plants and/or their leaves. An ongoing program encourages children to become bugologists. “Our bug programs have been very popular – people like to learn about bugs and hold tarantulas and gaint roaches. People come here for many different reasons – the roses, butterflies and now the bugs,” Dan says.

Thanks to the new conservatory, Hershey Gardens has been able to expand its programming for school groups into a year-round effort. Financially challenged schools can take advantage of the Share the Gardens Scholarship Fund, which provides scholarships for field trips to the gardens. Any Pennsylvania school that has 75% or more students eligible for free- or reduced-price lunches under the National School Lunch program is eligible for the scholarship program.

More educational opportunities are on the horizon. For example, the hoop house that was formerly home to the butterflies will be repurposed to become part of children’s programming. Plans also include a sustainable vegetable garden and a display beehive that will be positioned near a pollinator garden.

“Families always enjoy the children’s garden. Kids and adults are often curious about beehives and what goes on inside of them. Having a display beehive next to the pollinator garden provides a great connection,” Dan says. 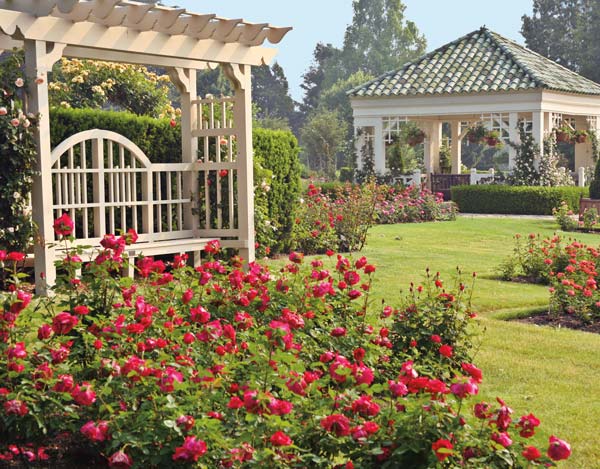 The gardens are filled with structures that allow visitors to sit and relax while they admire the roses and other floral displays.