Milestones are interesting pieces of history and fortunately you can still find them hiding in plain sight along roadways in Lancaster County. 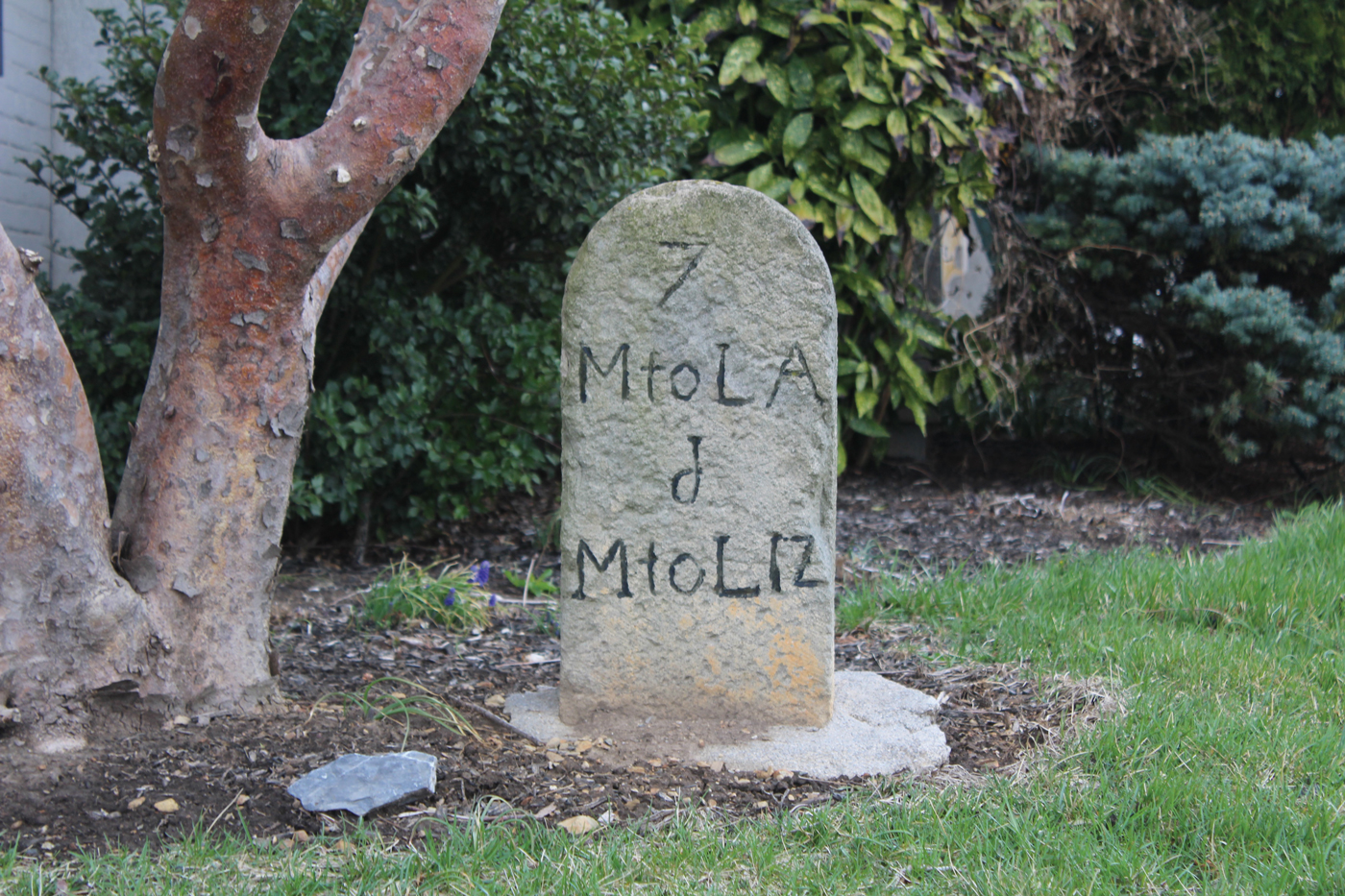 The word “milestone” has come to mean an important event in a person’s life, but the word’s first meaning was something much more literal. Originally, a milestone was exactly what the word says – a carved piece of stone that served as a mile marker along highways. Before big green signs and GPS systems, these stones were the only way to know how far it was to the next town.

Milestones have guided American travelers for centuries, but they’re hardly an American invention. The ancient Romans installed the first of them to tell travelers which road they were on and how far it was to their destination.

In the early years of the United States, people traveled in a manner much like the Romans had – on foot, on a horse or in a vehicle pulled by a horse. Travel was difficult because rain and snow would turn the dirt roads into mud, while dry spells would turn them into dust.

Many milestones were adjacent to the wayside inns that served as hotels, bars, restaurants, stables and general stores, and were so important that in 1774, the Colonial Legislature imposed a fine of three pounds or imprisonment in the common jail for defacing or marking milestones. 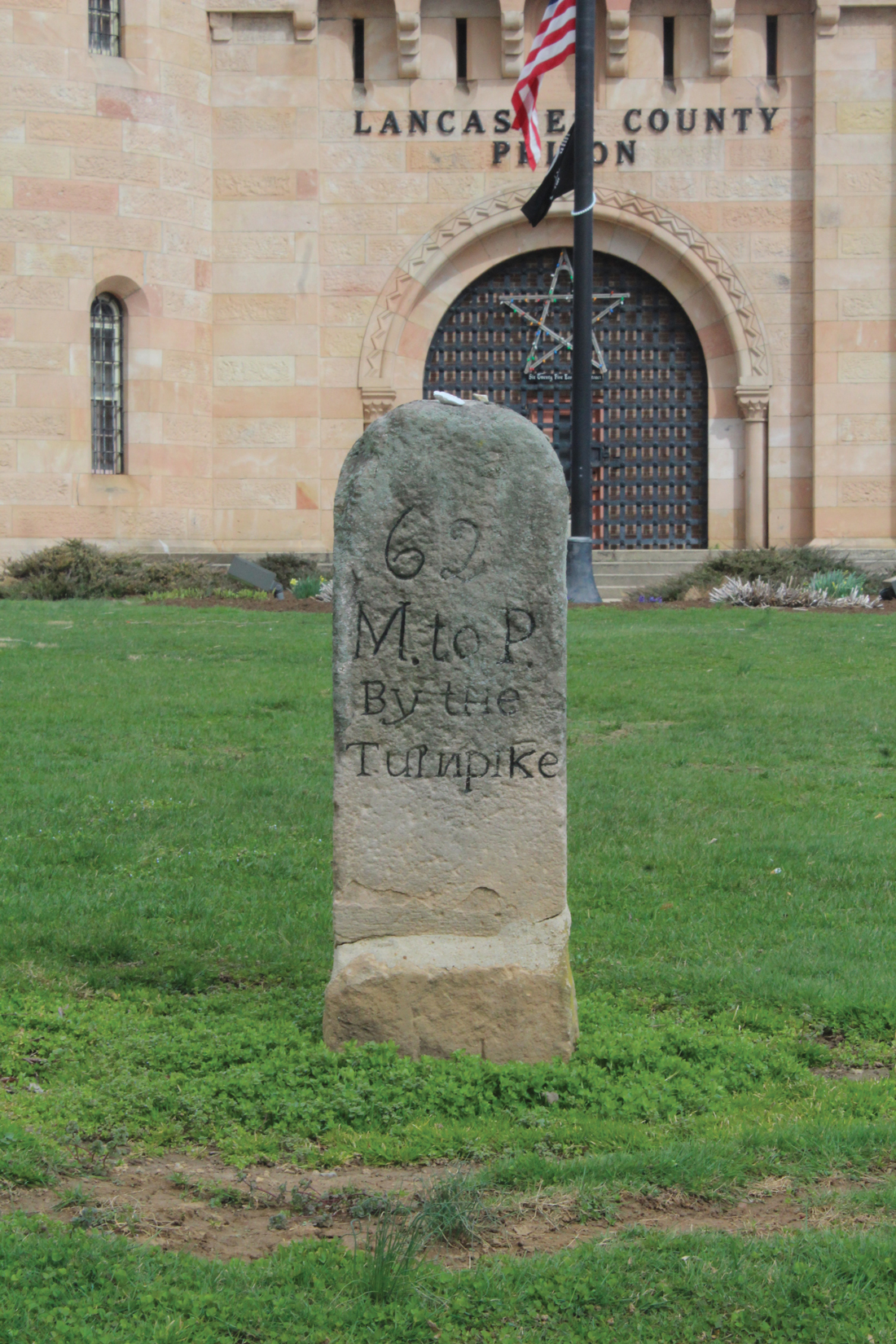 While milestones are no longer necessary, many are still standing and, if you look closely, you can still spot them. In fact, it’s highly likely that you’ve driven or even walked past some of them hundreds of times without even noticing.

For example, one such milestone stands on the grounds of The Castle, aka Lancaster County Prison, on East King Street. It’s obviously been there for a long time, since the turnpike to which it refers is the Philadelphia/Lancaster Turnpike, which opened in 1795.

The turnpike was the first hard-surfaced road in the United States, and it stretched from 34th Street in Philadelphia to Lancaster. In 1913, much of the original route of the turnpike achieved another first when it became part of the Lincoln Highway, the nation’s first transcontinental highway.

Like the meaning of “milestone,” the meaning of “turnpike” has evolved. Just like modern turnpikes, early turnpikes charged tolls. At a tollhouse, a long wooden pole – called a pike – guarded the entrance to the road. When a traveler would pay the toll, a worker would turn the pike to allow entrance, hence the origin of “turnpike.”

Now, if you want to have a scavenger hunt for milestones in Lancaster County, where’s the easiest stretch of road for finding them? That’s probably Harrisburg Pike, which was originally the Lancaster, Elizabethtown and Middletown Turnpike.

As you leave Lancaster, you can see seven of the first eight milestones. The first, indicating one mile to Lancaster and 24 to Middletown, is in front of the Burnham building. The second milestone has disappeared but the next six are intact.

If you do go looking, keep in mind that milestones on east/west highways are on the north side of the road, and on north/south highways, they’re usually on the east side of the road.

This month’s column was submitted by a guest writer, Bill Simpson of Lancaster.