May is the month we typically pull out our kayaks, clean them and start checking the weather forecast on a daily basis. Sure, the May water temperatures aren’t for everyone, but we’ve been waiting for months now to splash around and get a head start on summer. 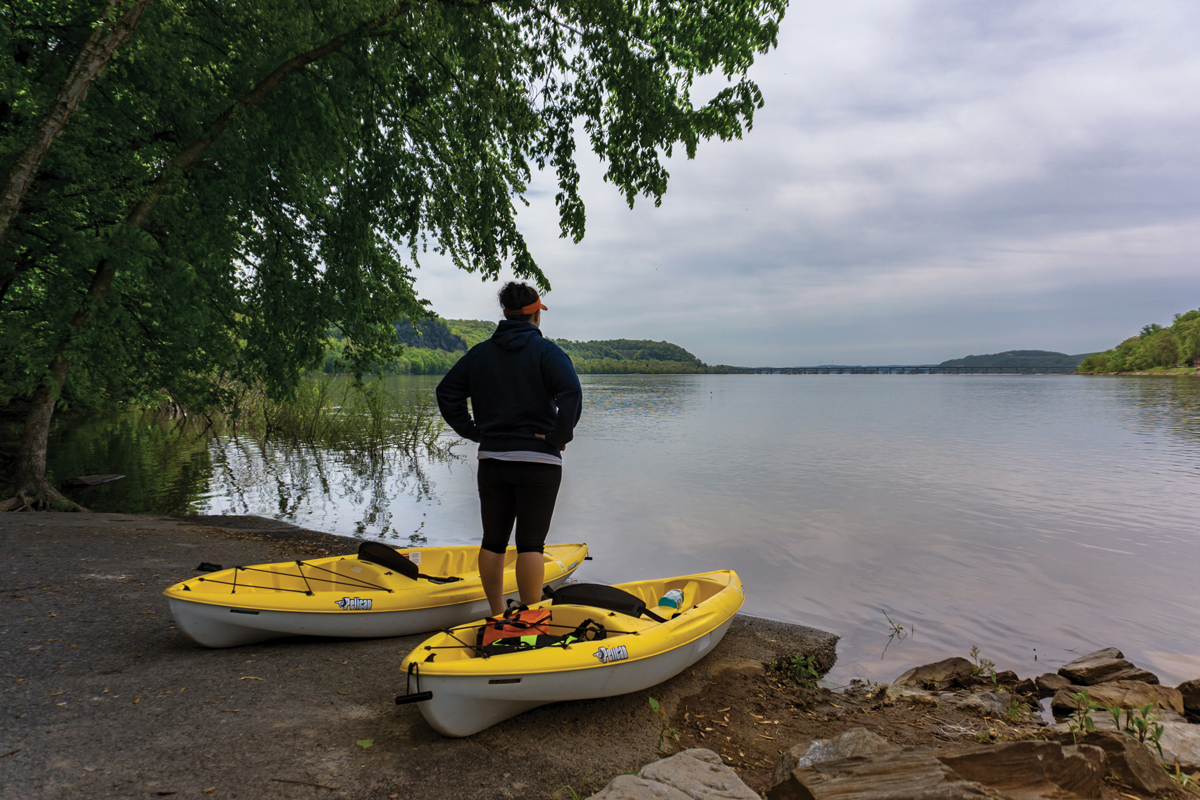 The view of the Susquehanna River, looking south from Marietta. The river is part of the Captain John Smith Chesapeake National Historic Trail.

If you’ve never been kayaking or you’re not sure you’re ready to buy one, there are two local outfitters that can help you get on the water: Chiques Rock Outfitters, with locations in Marietta and Columbia, and Shank’s Mare Outfitters, which is across the river in Wrightsville (Long Level). Both offer rentals, and their staffs are knowledgeable about the waterways in the area. They also usually organize or participate in a variety of family-friendly events throughout the summer season.

As you’ll discover, there’s a lot of territory to explore. Lancaster County has over 1,500 stream miles running through it. A few of our favorite waterways to paddle include the Cocalico, Pequea, Octoraro and Mill creeks, as well as the Conestoga River, which stretches more than 60 miles across the county before emptying into the Susquehanna River at Safe Harbor. Each is fairly easy to navigate and offers its own unique scenery.

Of course, the Susquehanna is the most notable of the waterways due to its massive size. At times, it’s over a mile wide as it winds along the western border of Lancaster County for 40-plus miles from Falmouth to the Maryland state line. There are many enjoyable areas along the Susquehanna for paddlers and land-lovers alike, especially with so much history along the shores.

Long before the arrival of railroads and canals, the Susquehanna played a vital role in the native Susquehannock’s way of life. At the beginning of the 17th century, Captain John Smith and his crew set sail from Jamestown to chart the Chesapeake and its tributaries. According to Captain Smith’s maps and journals, they traveled up the Susquehanna until they were stopped by the Conowingo Falls.

Before departing, they met and befriended a tribe of Susquehannocks near modern day Port Deposit, Maryland. Smith learned of other native settlements further upriver and added them to his first map, which was published in 1612.

When the Captain John Smith Chesapeake National Historic Trail was established in 2006 – America’s first water-based National Historic Trail – it included the lower portion of the Susquehanna River. In 2012, the trail was expanded to include the entire length of the river from south of Cooperstown in New York and into Maryland. The trail now consists of over 3,000 miles of waterway that encompasses the Chesapeake Bay and its tributaries.

A good place to learn about bay and river history is at the Zimmerman Center for Heritage in Wrightsville, which serves as the state’s official Visitor Contact & Passport Station for the trail. The Zimmerman Center for Heritage is part of the nonprofit organization, Susquehanna Heritage, which aims to preserve the river’s history as well as promote tourism for the region. It also oversees Columbia Crossings.

An 18th-century riverfront home, which was restored by John and Kathryn Zimmerman, serves as the centerpiece of the Zimmerman Center for Heritage. Visitors can tour the house and view its impressive river-related art collection. Educational programs are offered on weekends, as are short guided hikes and other outdoor activities. A lecture series is also held. The grounds are open daily from dawn to dusk. Kayakers and other boaters can approach the center via the river and take advantage of the center’s dock, pavilion and river bank while they explore this riverside treasure.

The Zimmerman Center for Heritage is located at 1706 Long Level Road in Wrightsville. For details, call 717-252-0229 or visit susquehannaheritage.org.

The view of the Susquehanna River, looking south from Marietta. The river is part of the Captain John Smith Chesapeake National Historic Trail.