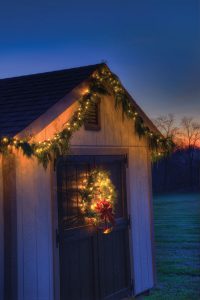 You name the holiday, and Nathan Mountain and Glenn Taylor decorate their home for it. The décor for Christmas involves at least a dozen trees, floral accents, vintage items, a collection of nutcrackers, homemade stockings, a beloved nativity and a gazillion lights. And, the calendar is filled with non-stop dinner parties!

In the late 80s, Nathan became intrigued by a farm in West Hempfield Township. The 2-1/2-acre property held two barns (one of which was falling down), a corn crib, a milk house and what Nathan calls a turn-of-the-century, 4-over-4 Pennsylvania Dutch-modern farmhouse. The acreage was part of what had once been a large tobacco farm. The most recent owner was also into farming, but unfortunately for him, his crops landed him on the wrong side of the law.

Nathan remembers that the property, which was surrounded by a high stockade fence, “was a mess. It was overgrown, the house was trashed and there was no running water.” Despite its appearance, Nathan stuck to his mantra that “everything has potential.”

The farmette had been acquired by a bank. Nathan and his real estate agent, Rina Aliotta, successfully negotiated the sale via phone calls made between Lancaster (Rina and the bank) and New York (Nathan). Finally, Rina called Nathan to tell him he was now the owner of a farmette that needed a lot of TLC. 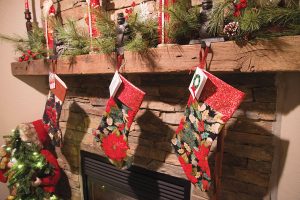 Over the course of the next year, Nathan “gutted everything” in the house. After that was accomplished, he built a large addition that holds the kitchen and living room on the first floor and a master suite on the second. “People would drive by, stop, and thank me for saving the property,” he says. 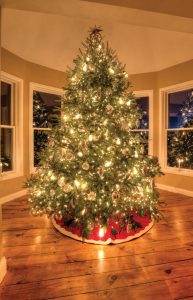 If Nathan’s name rings a bell, you’ve probably seen it on For Sale signs around the county. Originally from Indiana, Pennsylvania, he moved to Lancaster as part of the management team for the restaurant chain, Mr. Steak. An interest in collectibles, cooking and gardening led him to open a specialty shop in East Petersburg that he named The Discovery Bin. “It was a floral shop, bakery and collectibles shop rolled into one,” he explains. Realtors were among his biggest customers. “Marilyn Berger was one of my best customers,” he continues. “She kept telling me I should go into real estate.” 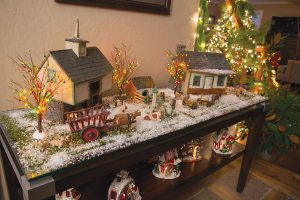 That opportunity presented itself when, out of the blue, someone offered to buy the shop. Nathan followed Marilyn’s advice and became an agent in 2001. His timing wasn’t the greatest, as the market went through a downturn in the aftermath of 9/11. He went on to become associated with Castellum Realty and weathered the bottom dropping out of the market during the Great Recession.

Five years ago, he struck out on his own and founded Mountain Realty. The multi-faceted company serves all of Lancaster County and specializes in assisting everyone from first-time buyers to corporate relocations and downsizers. There are 15 agents on staff, some of whom are bilingual. Glenn, who is originally from Blue Bell in Montgomery County, is employed by the company. 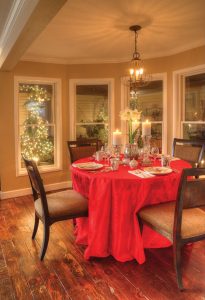 Nathan and Glenn began remodeling the house — for a second time — four years ago. This time around, the projects included a new kitchen, new flooring and refacing the fireplace. Nathan, who inherited woodworking talents from his father, installed the floors himself, using new pine lumber that he distressed. And, they’re still at it, as a new addition will hold a large dining room. They hoped to have it finished in time for Thanksgiving dinner and, following that, Christmas entertaining. They plan to convert the current dining room into a game room or sitting area. What began as a 2,000 square-foot house has grown to include more than 5,000 square feet.

Decorating the house is a year-round endeavor. “Both of us are into holiday decorating and by ‘holiday,’ I mean all of them,” says Nathan, who appropriately enough was born on Christmas Eve. “We love to change the look.” Glenn adds, “We feed off each other.”

For them, the holiday season begins on Black Friday, when they travel to Indiana and visit a tree farm near Nathan’s parents’ home. Wreaths are made, lights are strung, paper whites and amaryllis are grown and Glenn’s collection of nutcrackers take center stage in a cabinet that Nathan’s father made from barn wood.

This year, the tree count will climb to an even dozen, as Nathan and Glenn’s bulldogs will have a dog-themed tree in their honor. Nathan’s mother, who is an accomplished seamstress (she made all the stockings) and quilter, will be making a special skirt for the tree. December will also mark the pups’ first birthday, so a festive birthday party is planned.

Once the holidays are over, the decorating theme morphs into winter, followed by Valentine’s and then Easter. For summer, the focus is on the outdoor areas, and as fall approaches, Halloween and the harvest take over. 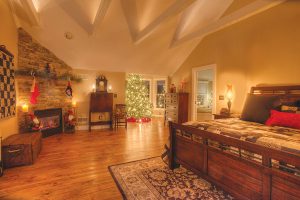 Nathan and Glenn love to share their home with friends and family. “We love to entertain,” Nathan remarks. “It’s nice to have people in to enjoy the trees and decorations.” Nathan, who inherited the “cooking gene” from his parents, prepared all the food for the 20 dinner parties he and Glenn hosted last holiday season. “I love to cook and bake,” he says. Glenn takes charge of creating the unique party favors that wow their guests.

If you think cooking all those meals is a feat, Nathan had to take responsibility for all aspects of entertaining for a time last year, as Glenn was under the weather — he had to undergo an emergency appendectomy the week before Christmas! 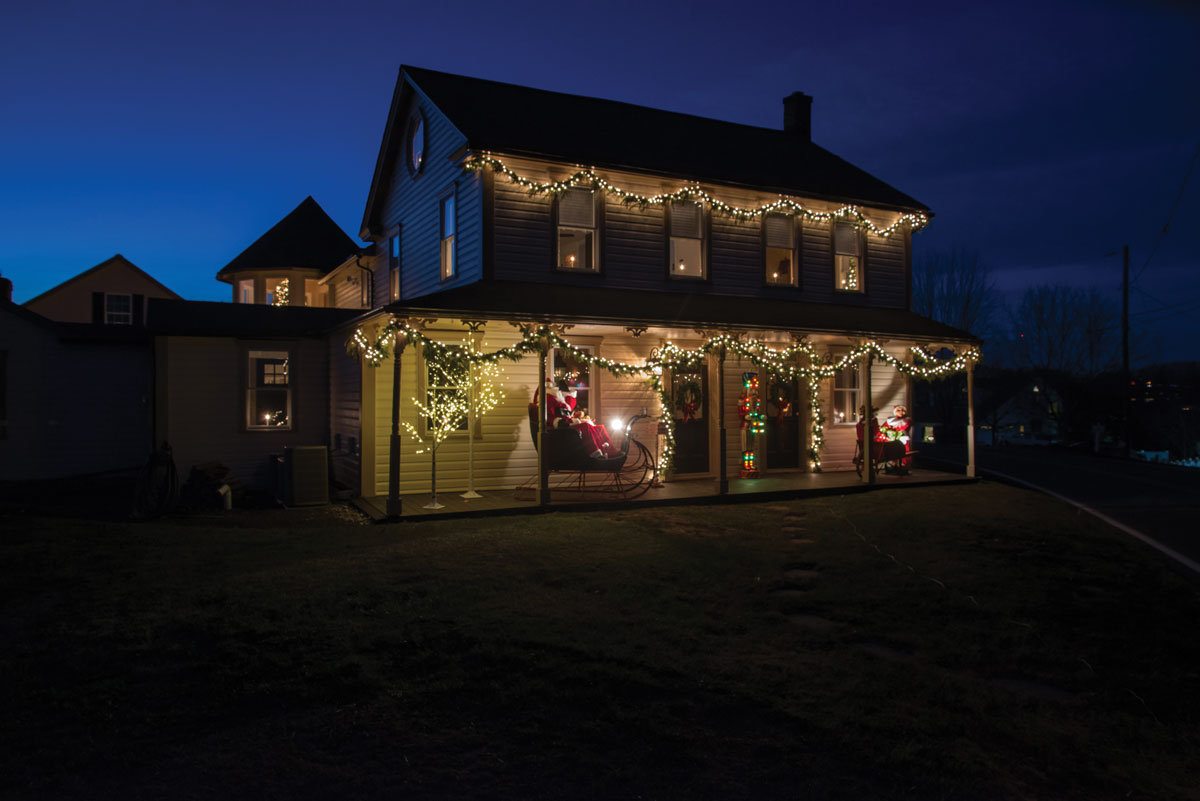 Lights, swags, wreaths, window candles and other decorations bring a seasonal touch to the exterior of the home of Nathan Mountain and Glenn Taylor.