Last year was a record-setting decorating season for designer Tim Arpin. For the first time in 28 years, the owner of The Gilded Lily found himself fielding requests from clients asking if he could decorate their homes in October. No, not for Halloween, but for Christmas! In addition, he had spent the previous year working on a very special Candy Land-themed holiday project for some long-time clients. 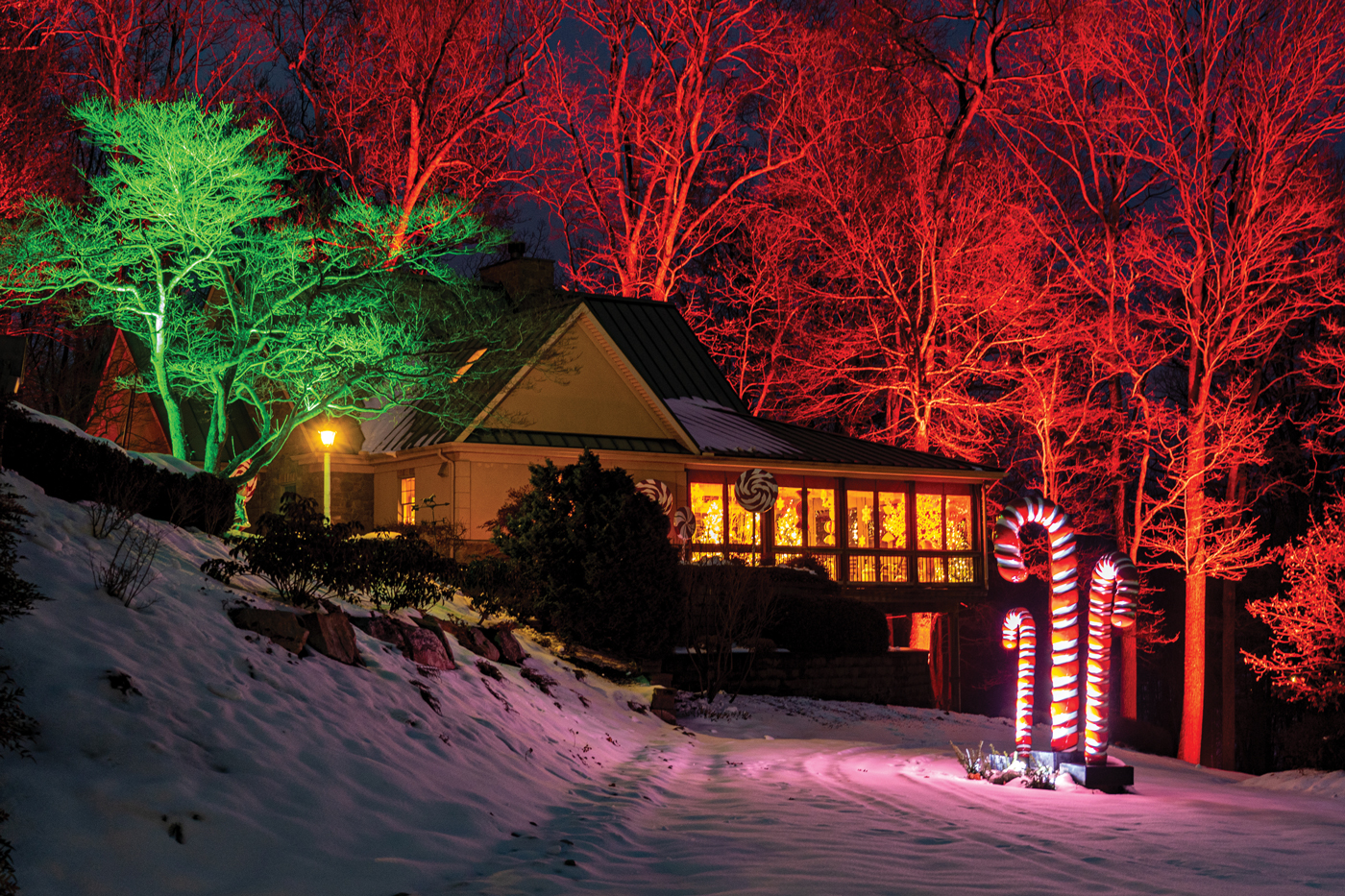 Last year, red and green uplights were used to illuminate the towering trees on the Martins’ property.

“I’ve been working with them for 25 years,” Tim says of Sally and Larry Martin, whose beautiful property is tucked away in the woods of eastern Lancaster County. “It all started with their daughter’s wedding, which was being held at their home. I was up against two designers from Philadelphia for the job,” Tim recalls. “Fortunately, they chose me.” After the wedding, the relationship continued. “I started doing container gardens for them and then moved to helping them with parties and seasonal decorating.” The scope of Tim’s services further expanded when the Martins built a “hunting lodge” on their property in 2001.

The lodge was built at the behest of the Martins’ interior designer, Anita Yoder of Heritage Design Interiors, who could no longer bring rec-room harmony to Sally’s design aesthetics and Larry’s ever-growing collection of hunting trophies. “Every time you’d get up from the sofa, you’d hit your head on the moose,” Anita explained in a feature story that ran in this magazine in 2003. 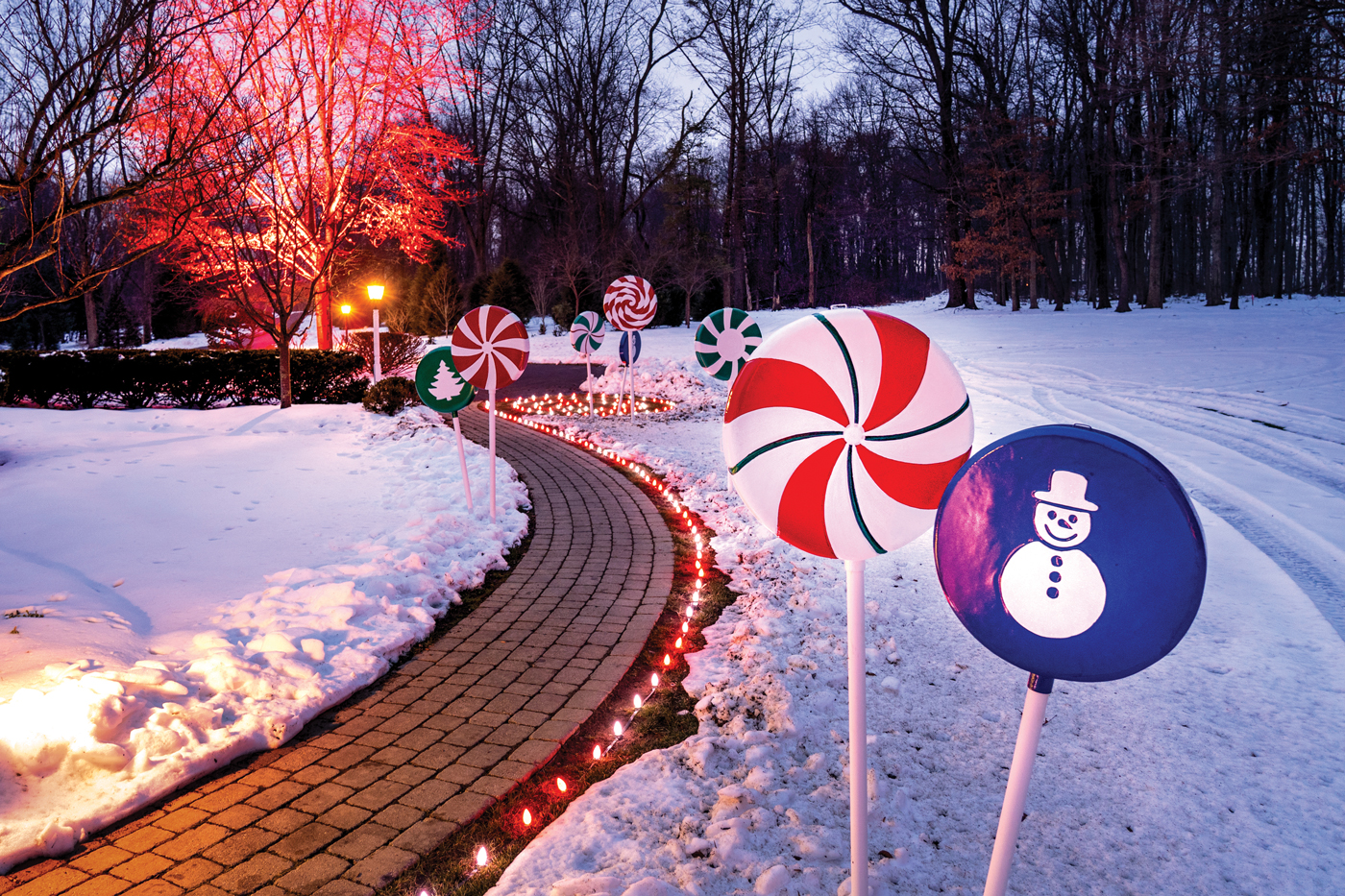 Artist Michael Hurrell created the lollipops that led the way to the lodge. The walkways were lined in red-and-white lights.

Larry finally agreed to Anita’s suggestion when he returned from a hunting trip that had taken him to within 400 miles of the North Pole and realized the polar bear that would be joining the menagerie would be a tight fit in the rec room. When the crate holding the polar bear arrived, Larry was all the more convinced he needed to heed Anita’s advice. “The crate was the size of a room,” he recalled. For the interim, the crate and its contents were relocated to a warehouse the Martins owned.

Larry has been hunting all his life and his trips have taken him all over the world. He says his definition of a vacation is “hooking up with a hunting guide and heading up into the mountains” with hunting and camping being the only things on the agenda. As for Sally, the only kind of hunting she enjoys is of the shopping variety. 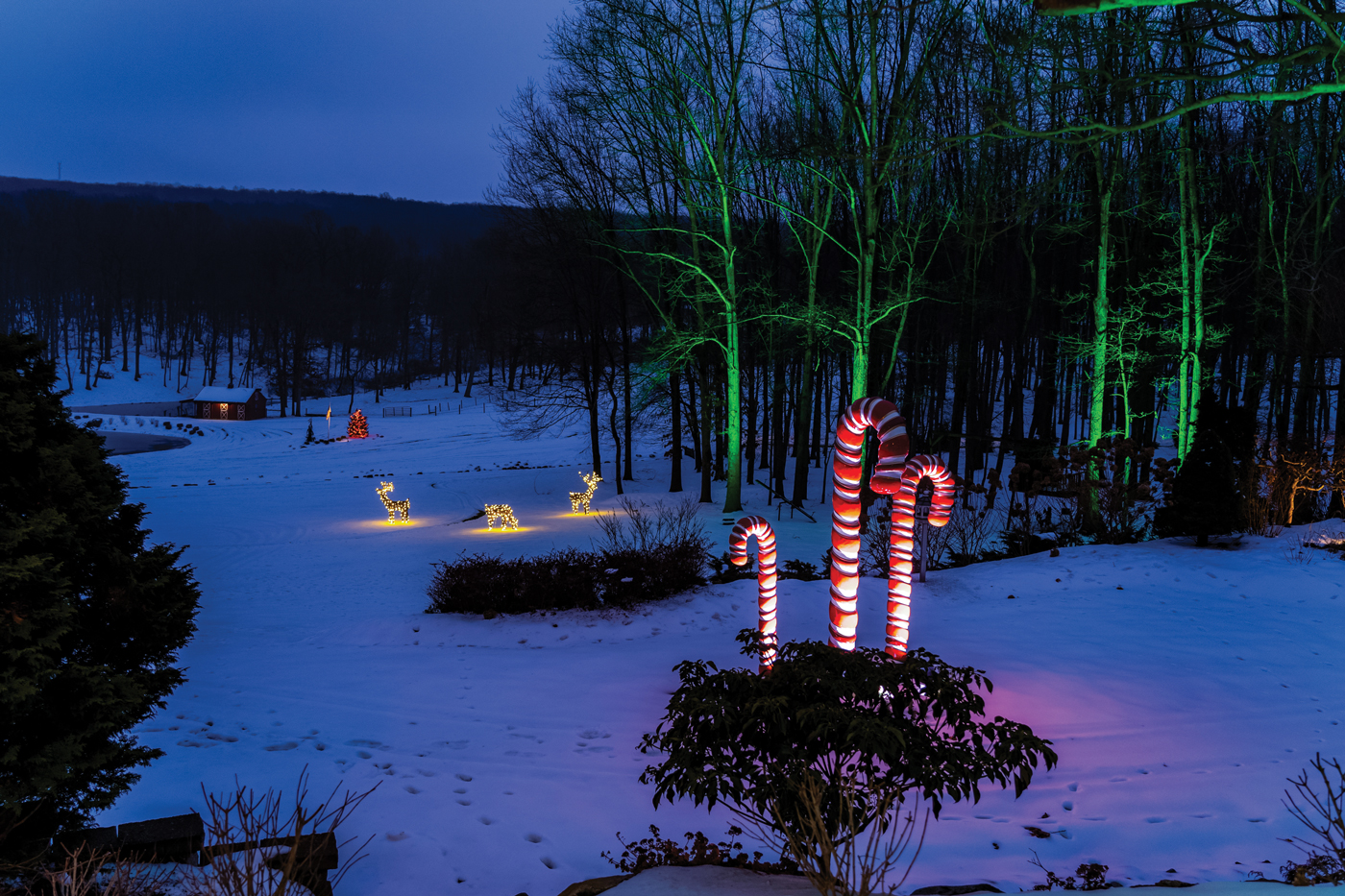 The view from the porch took in holiday decorations, illuminated trees, a snow-covered field and a pond.

Anita went to work and presented preliminary sketches of a “hunting lodge” that would be “spacious yet cozy.” Details included a soaring cathedral ceiling that would provide the space with the scale that was needed to accommodate Larry’s hunting trophies. Niches would provide ledges on which animals such as mountain lions could recline. A fireplace was also on Larry’s must-have list.

Other than that, he told Anita and Sally to design away to their hearts’ content. As a result, the hunting lodge, which grew in size to more than 1,400 square feet, was outfitted with a kitchen, living and dining rooms separated by a double-sided stone fireplace, a powder room and a wrap-around porch that overlooks woodland and a large pond. Furnishings ranged from leather sofas to a dining table that can accommodate 24 guests. Window coverings and accessories further reflected the hunting-lodge theme. 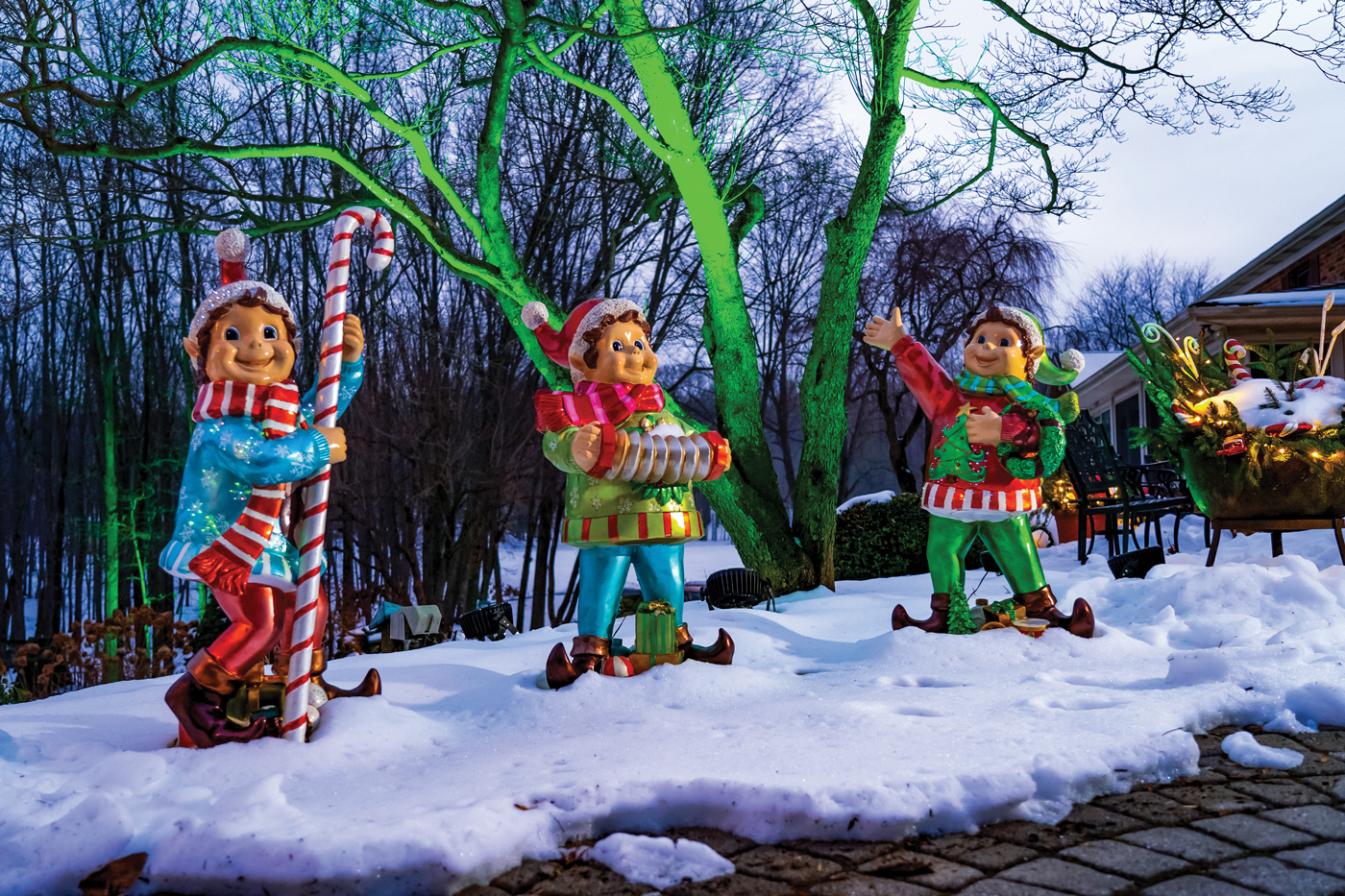 Elves were also on the welcoming committee.

When the lodge was finished in time for Christmas 2001, it became holiday central for family and friends. It ultimately evolved from being Larry’s man cave to a place where he and Sally can entertain family and friends for holiday (all of them) gatherings and other celebrations. “It’s become a party house,” explains Tim, who now decorates the lodge’s exterior throughout the year to reflect the changing seasons. As for the lodge’s interior Christmas/winter décor, which Tim oversees, it gets installed in early November and stays in place until some time in February.

Decorating for the holidays has become an integral part of The Gilded Lily’s menu of services it provides to clients. “It all started in 1993, when clients asked if I could help them decorate for the holidays,” he says of the then-owners of Greystone Manor, a horse farm near Leola. Tim decorated the trees at the entrance to the farm with lights whose hues changed from blue to amber to clear, which was revolutionary technology at that time. “The display was even featured in the newspaper,” he notes. From there, Tim began fielding requests for help from other clients who lacked the creative skills or the time that was needed to fully decorate a house. 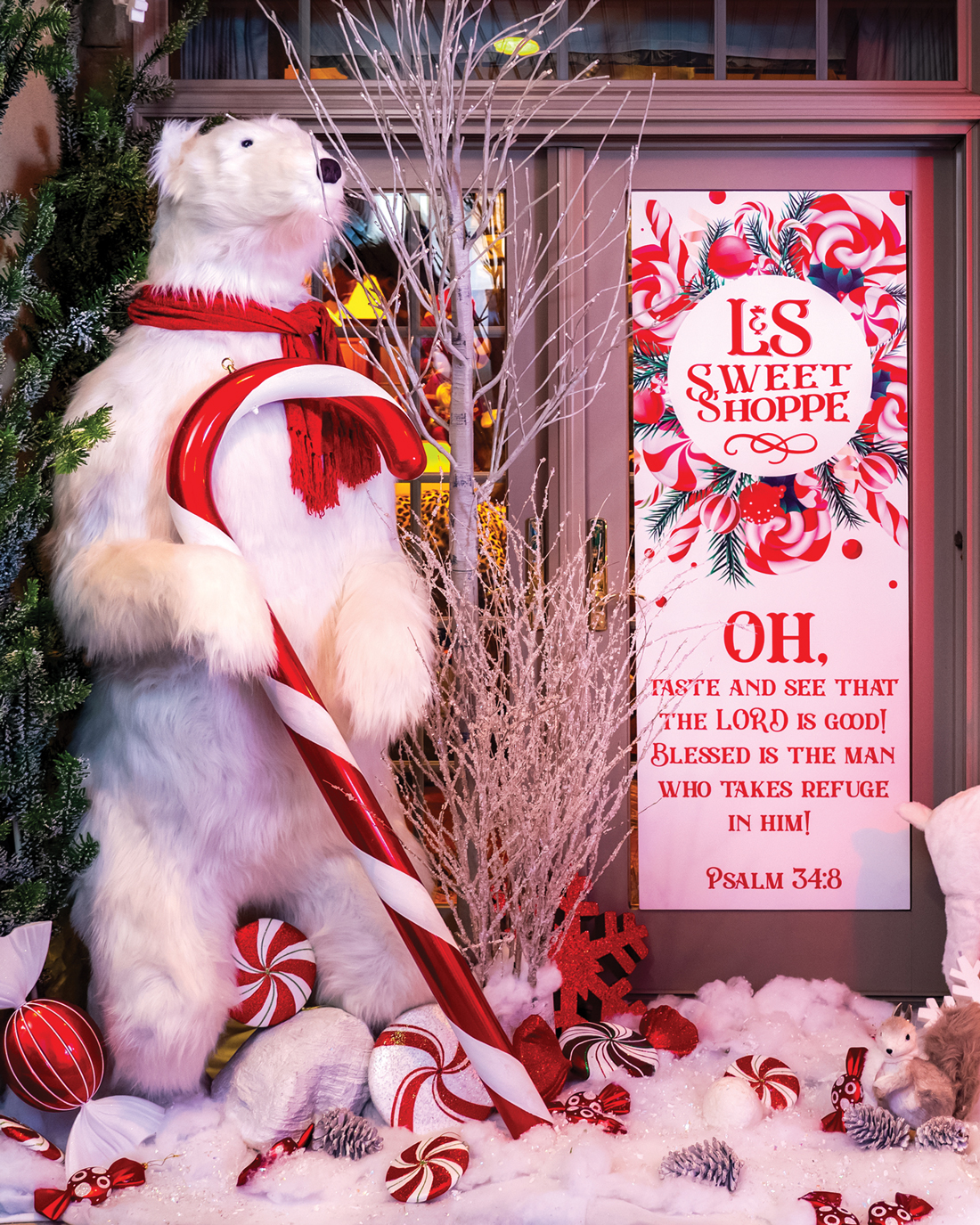 Fortunately for Tim, the timing meshed with everyone wanting to emulate Martha Stewart, who skillfully decorated her home top to bottom, inside and out for the holidays. The days of simply decorating a tree the week before Christmas and buying a poinsettia or two were relegated to the past. As Tim discovered, his clients wanted to fully embrace the season through decorating their homes. He also came to realize they wanted their homes transformed as early as Thanksgiving (or sooner). “When people are going to the lengths they do to decorate, they want to be able to enjoy it for a prolonged period of time,” he theorizes.

Last year’s requests to decorate in October initially came as a surprise but Tim recognized that with people spending so much time at home, they were more than ready for some Christmas cheer. “Last year, people seemed to skip right over Halloween and concentrate on Christmas,” he notes. 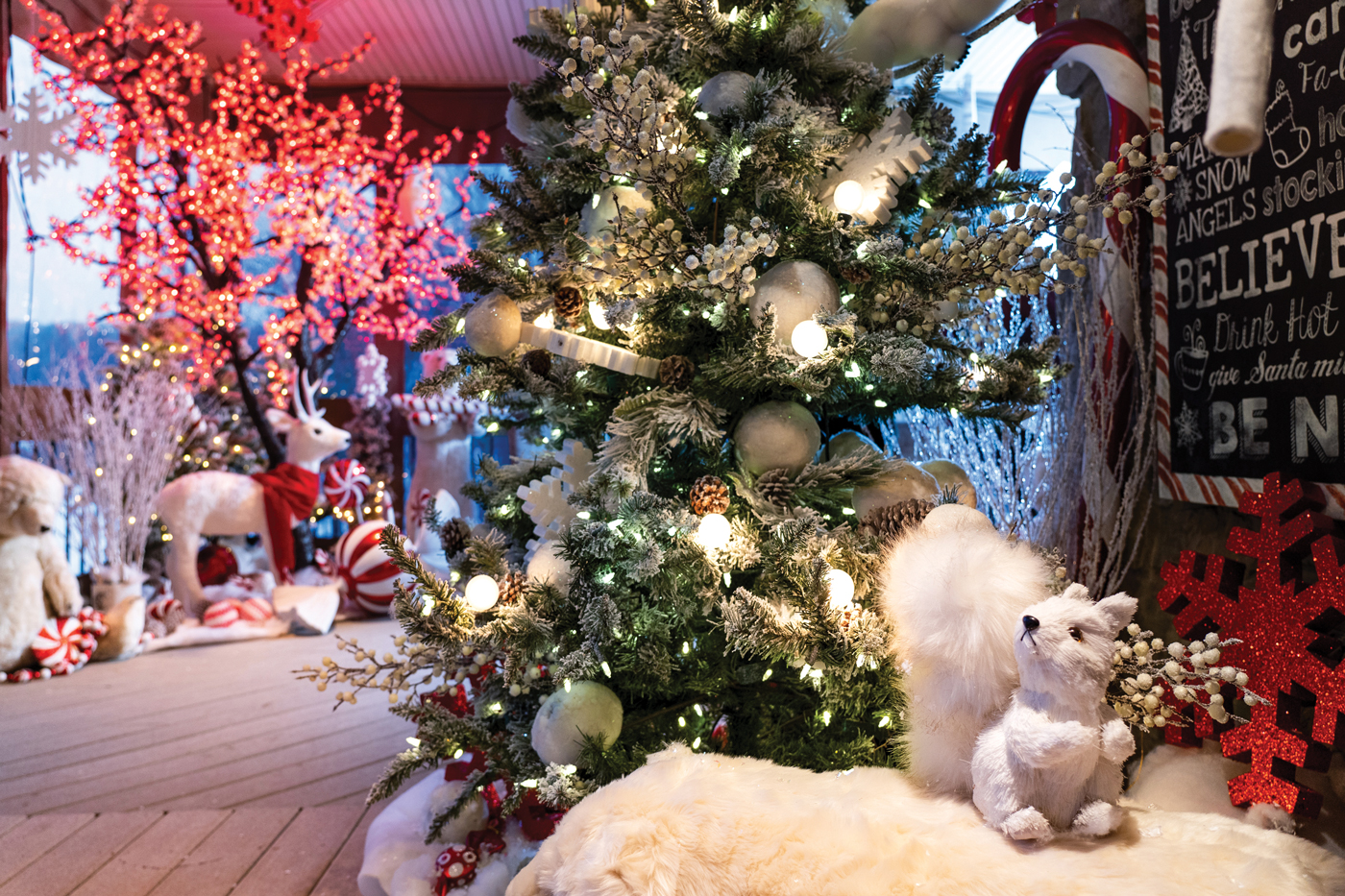 Trees and woodland creatures welcomed guests to the lodge.

Tim takes pride in the fact that The Gilded Lily provides adults and children alike with the element of anticipation that’s followed by surprise, both of which add to the spirit of Christmas. “Clients never know what they’re getting,” he explains. “For a lot of them, the routine is we arrive early in the morning and they leave for the day. When they get home that evening, they walk into a fully decorated house,” Tim explains, noting, “It’s kind of a magical experience.”

The Martin project entailed a caravan of trucks, the talents of five staff members and a week’s time to install. “Just getting everything there was a challenge,” Tim recalls. “When we’re creating on-site, we always take more than we will need. It’s a team effort,” Tim relates, noting that from a creative standpoint, “one idea leads to another.” 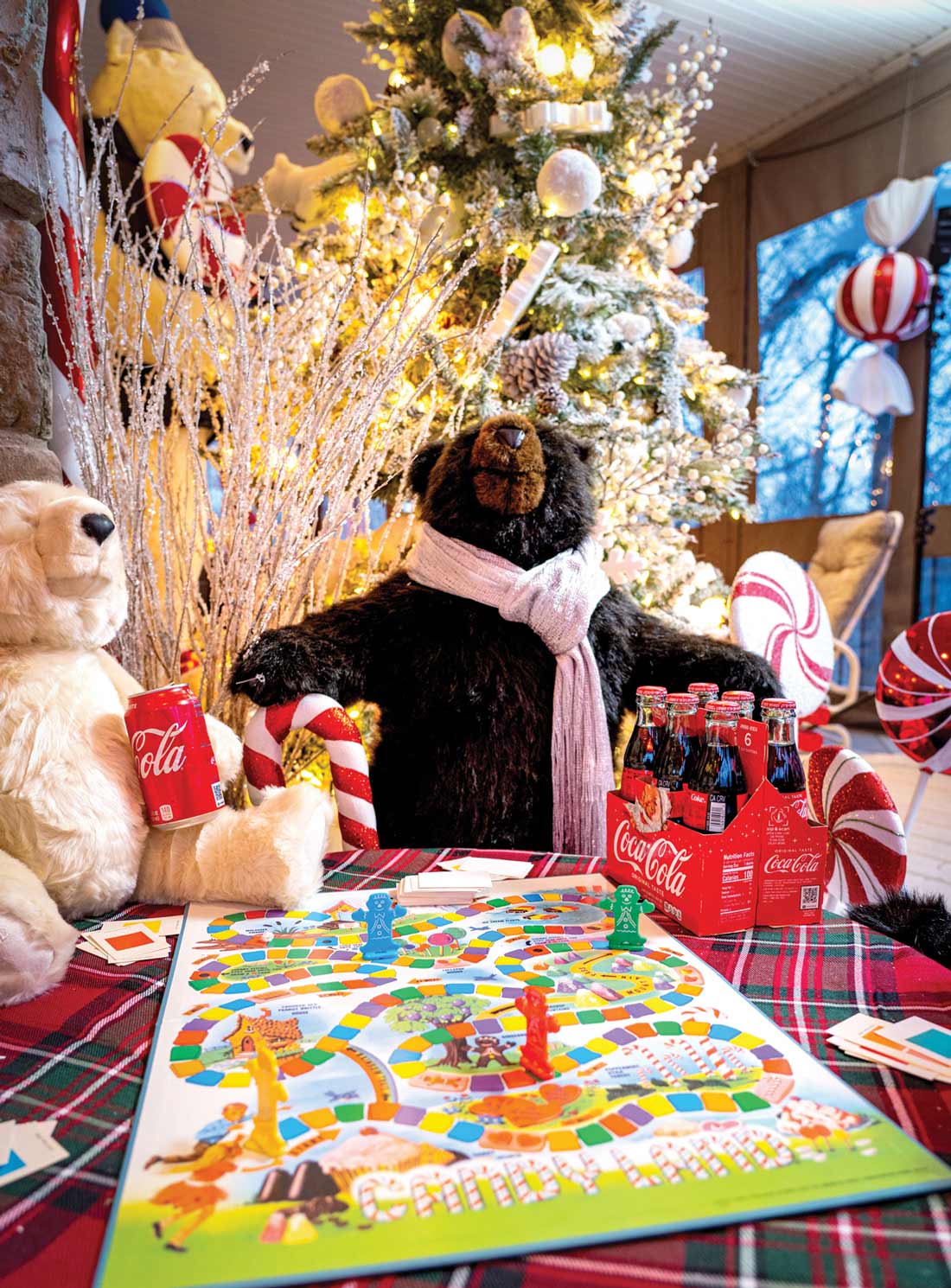 Candy Land provided the theme for a third time at the request of one of the Martins’ granddaughters.

As for the Candy Land theme, “This is the third time we’ve used that theme for them,” Tim says of last year’s décor. “Each time we did it differently. It was a favorite theme of one of their granddaughters – she requested that we revisit it for a third time.”

Tim honored the request and devoted a year to its design, which employed a red-and-white color scheme. In regards to carrying out the theme, Tim had plenty of decorating items at his disposal. “Currently we have three barns and two warehouses that are packed with everything and anything having to do with decorating for parties, weddings and holidays,” he says. “Everything is very organized.” 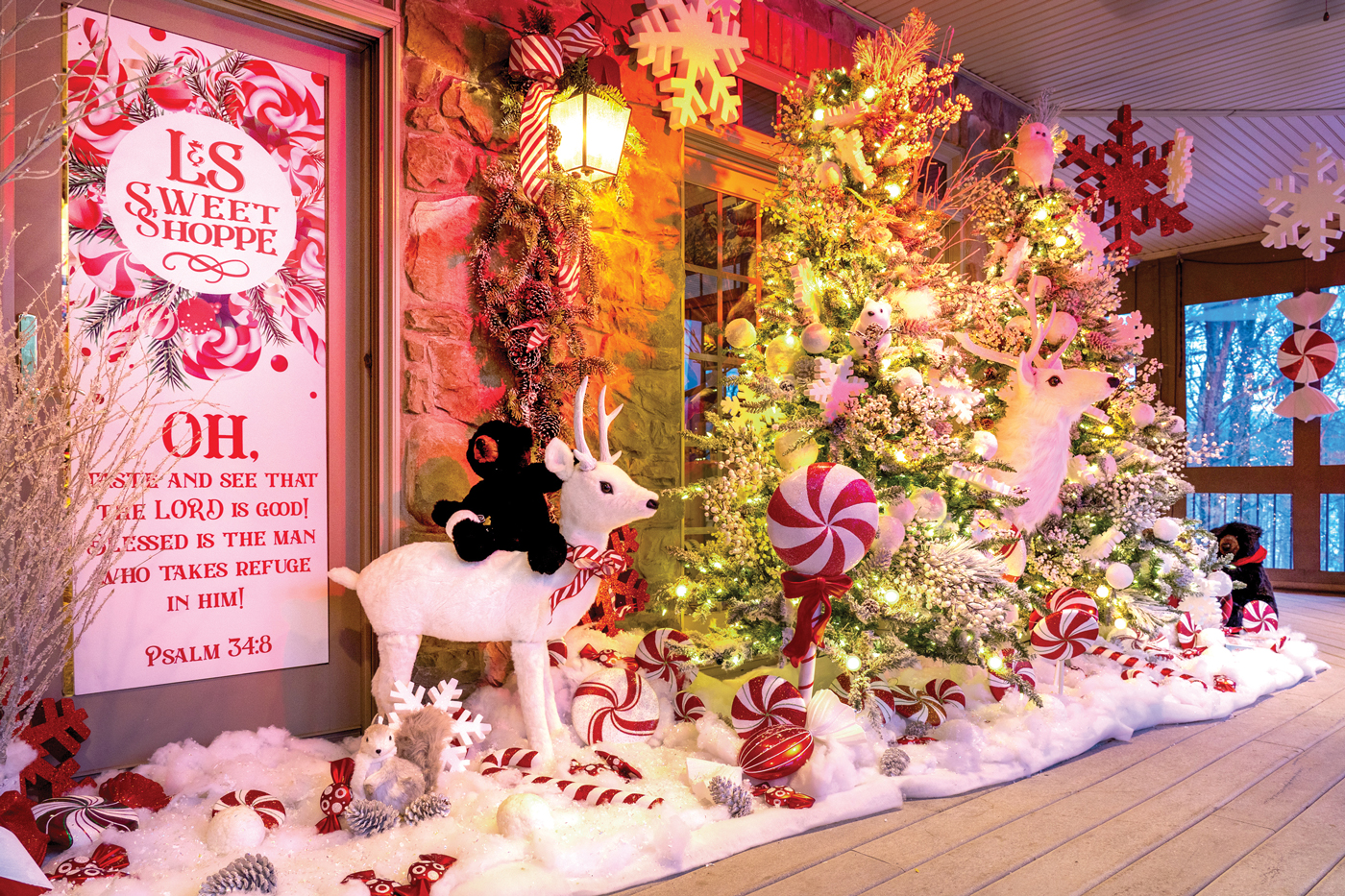 The signage, which Tim designed, related to the décor’s theme, as well as the business the Martins own.

Tim considers himself fortunate to have such a treasure trove available. “I’m always adding to and deleting from it,” he explains. “I donate a lot of items that I ‘retire’ to the Hospice Labor Day auction every year. This year we’ll probably be recycling a lot of items because of supply-chain issues and the fact that I didn’t go to the Atlanta Gift Show that’s held in January. Fortunately, I bought a lot of items two years ago, so we’ll be in good shape this year.”

For those of you who are making decorating plans, Tim fears that supply-chain issues will be ongoing and suggests that you “shop early, stock up on lights, which were hard to come by last year and, if you see something, grab it.” 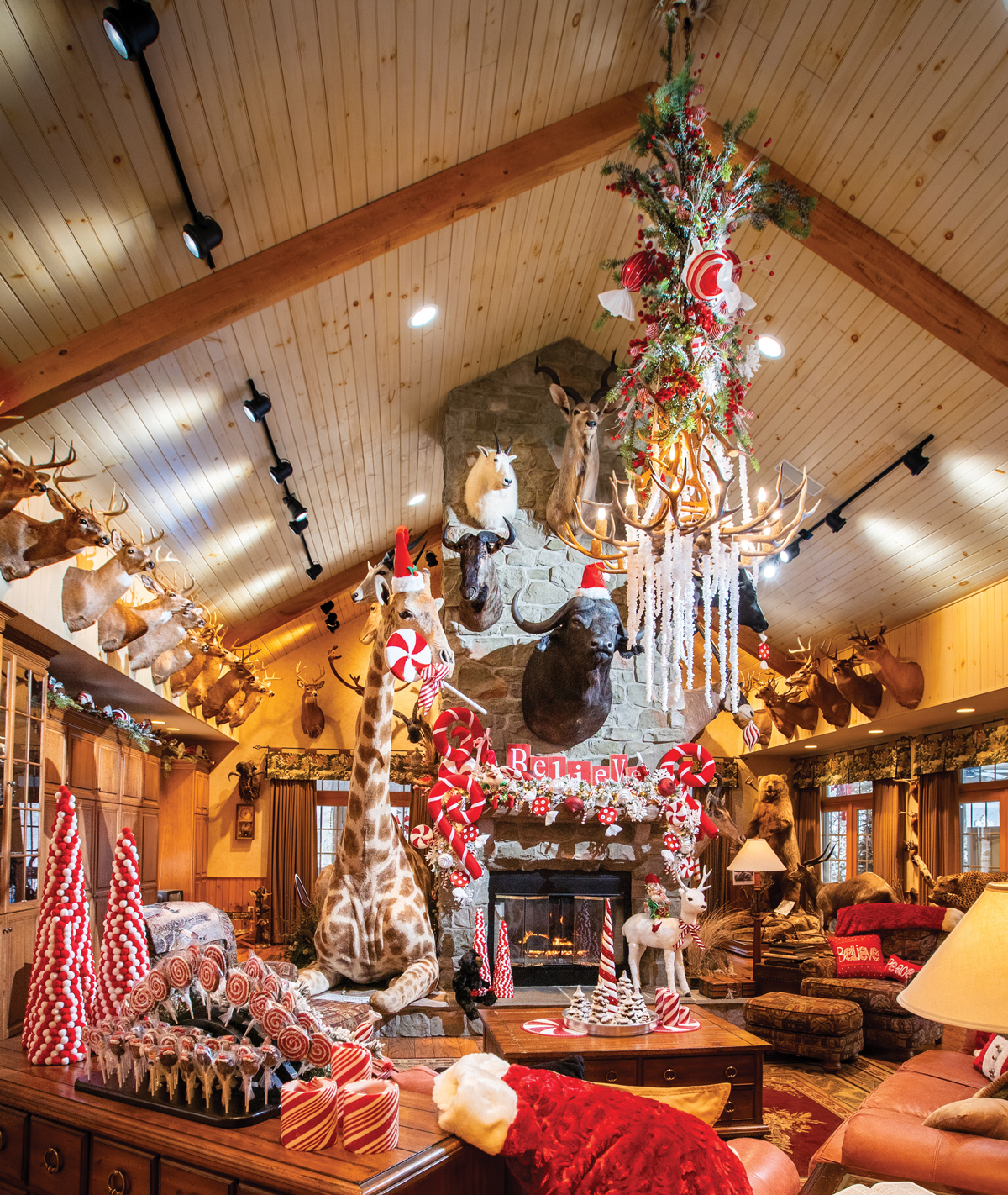 The lodge was built to display Larry’s hunting trophies and serve as his man cave but has taken on the role of a party house. Here, Tim carried out the Candy Land and red-and-white color scheme indoors.

He’s also become a fan of introducing natural elements into holiday décor. “For the first time in a long time, we put up a tree last year,” he says of decorating the home he shares with his spouse, James Henning. “We put it outside on one of the enclosed decks and decorated it with all-natural elements. I really liked the results and ended up incorporating that theme into several projects.” The fact that the tree was outdoors allowed Tim and James to safely entertain friends and family over the holidays. “We bought a supply of heavy throws guests could use,” Tim explains of the manner in which they addressed creature comforts. 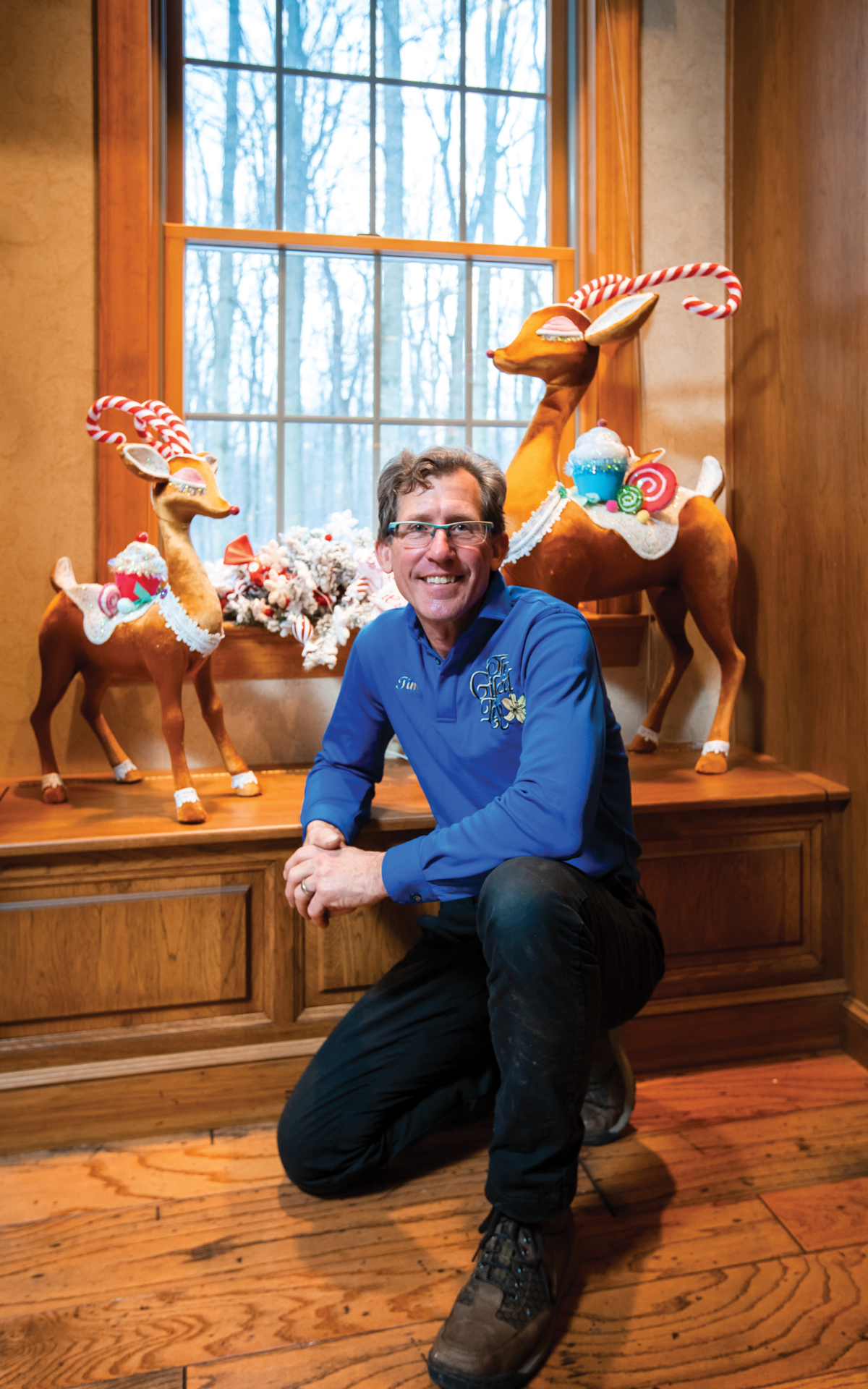 Tim Arpin has been decorating homes for the holidays since 1993.

As Tim worked on the Martin project throughout 2020, he visualized pairing Larry’s hunting trophies with faux animals – bears, deer, owls and squirrels – of all shapes and sizes. “We have stuffed animals in three colors,” Tim says of the white, brown and black animals that are in storage.

For the candy element, Tim worked with Tracy Artus, the owner of Miesse Candies, to create custom designs of sweet treats that were both decorative and edible. 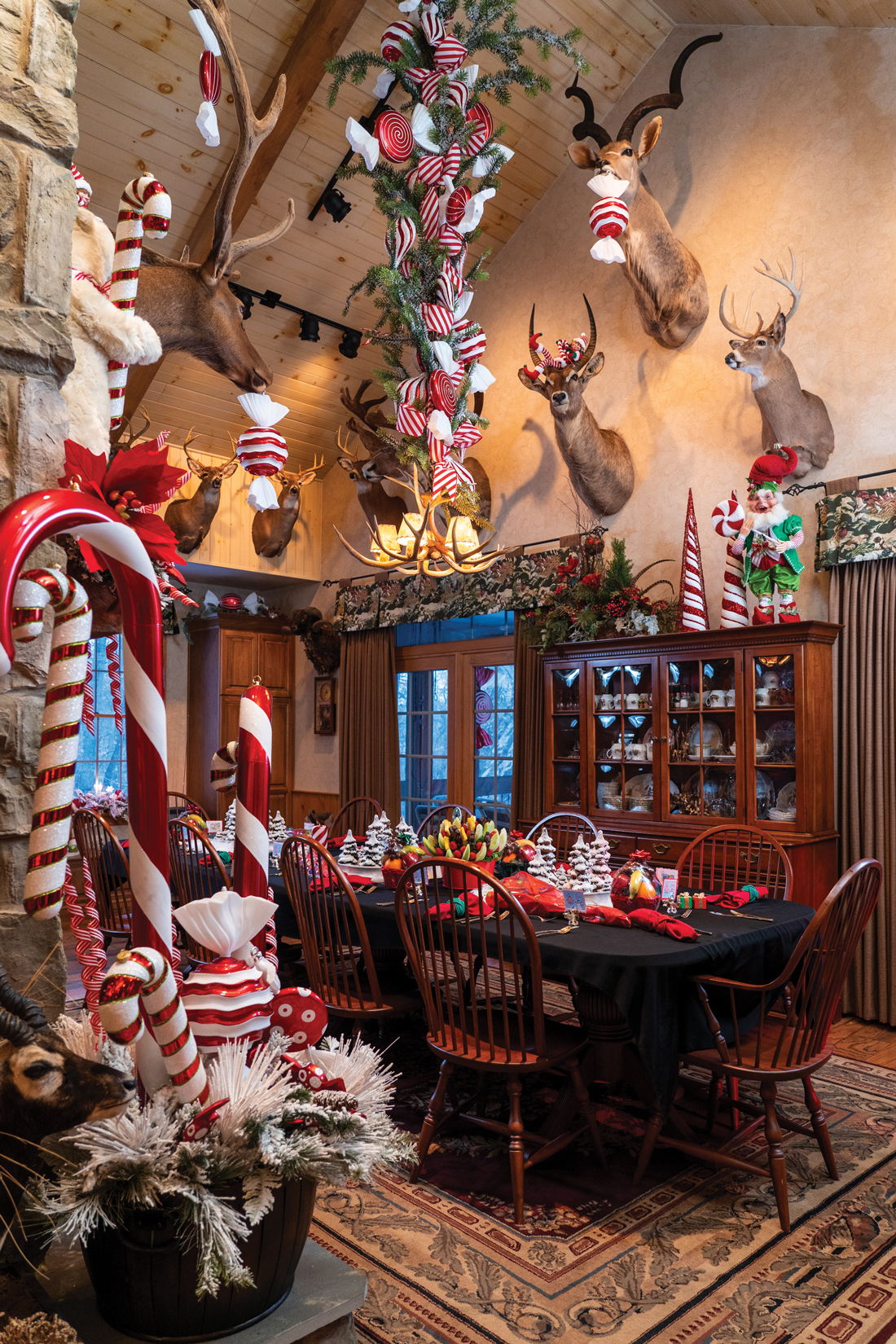 The dining table in the lodge can seat 24 guests. Tim decorated the tabletop with a variety of edibles, including snow-dusted chocolate trees that were custom made by Miesse Candies.

As always, both sides of the fireplace were decorated, as were all the chandeliers. “Those are a must-decorate for all our projects,” Tim notes.

The theme encompassed the porch as well as outdoor areas, where trails of red and white lights led the way from the house to the hunting lodge. Colorful lollipops – created by artist Michael Hurrell of Millersville – were also situated along the pathways leading to the lodge. The final touch was dramatic uplighting – in hues of red and green – that washed over the stands of trees that surround the property. 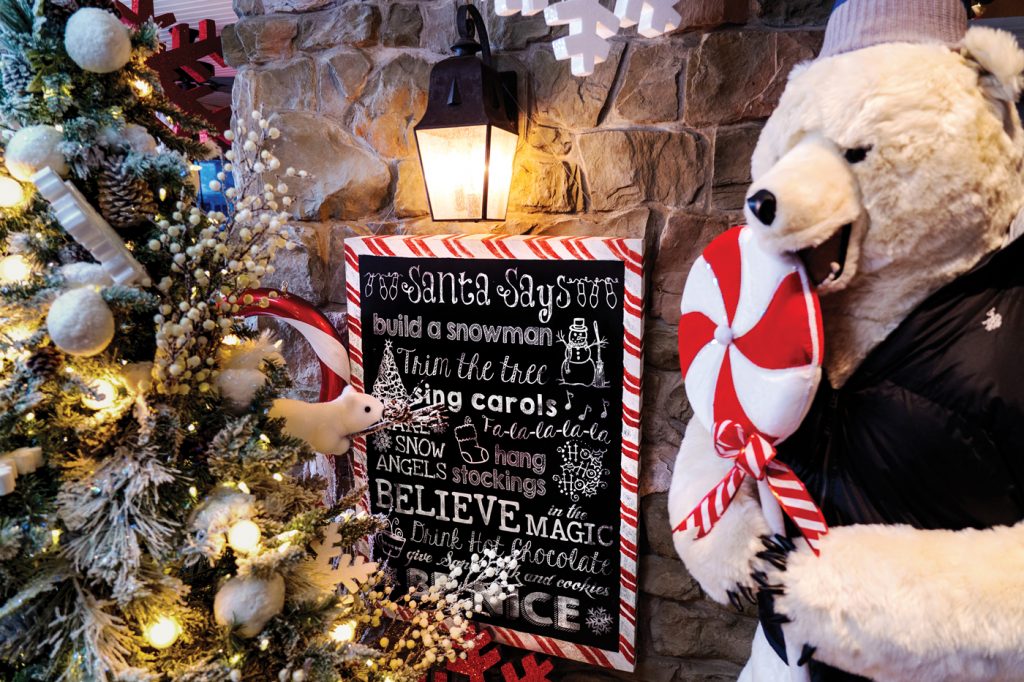 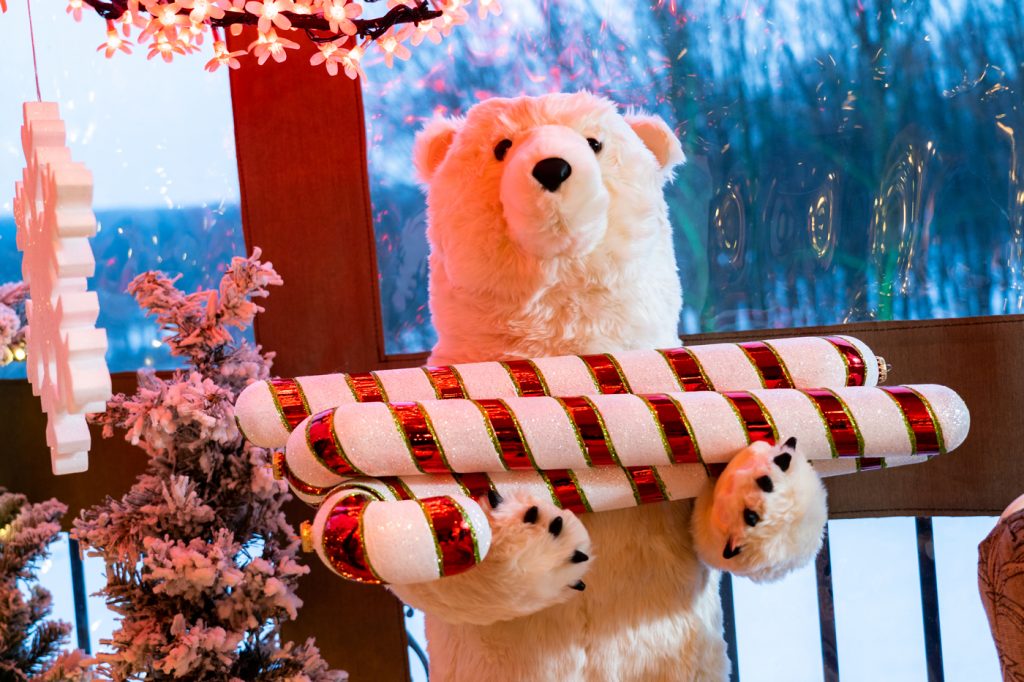 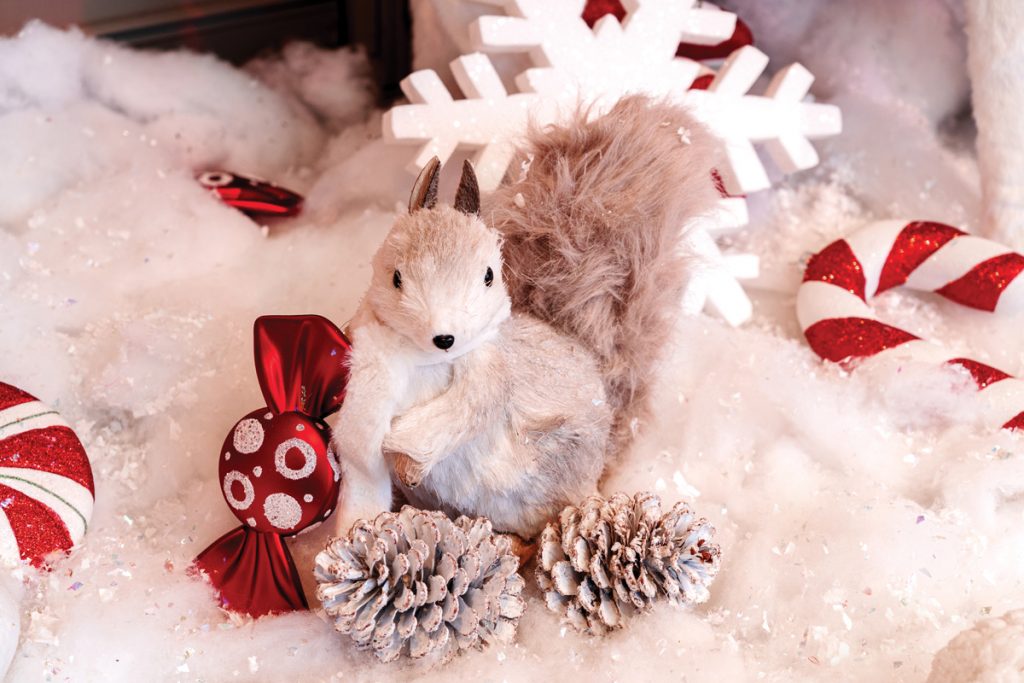 The porch’s “wildlife” consisted of squirrels, birds, deer and bears. 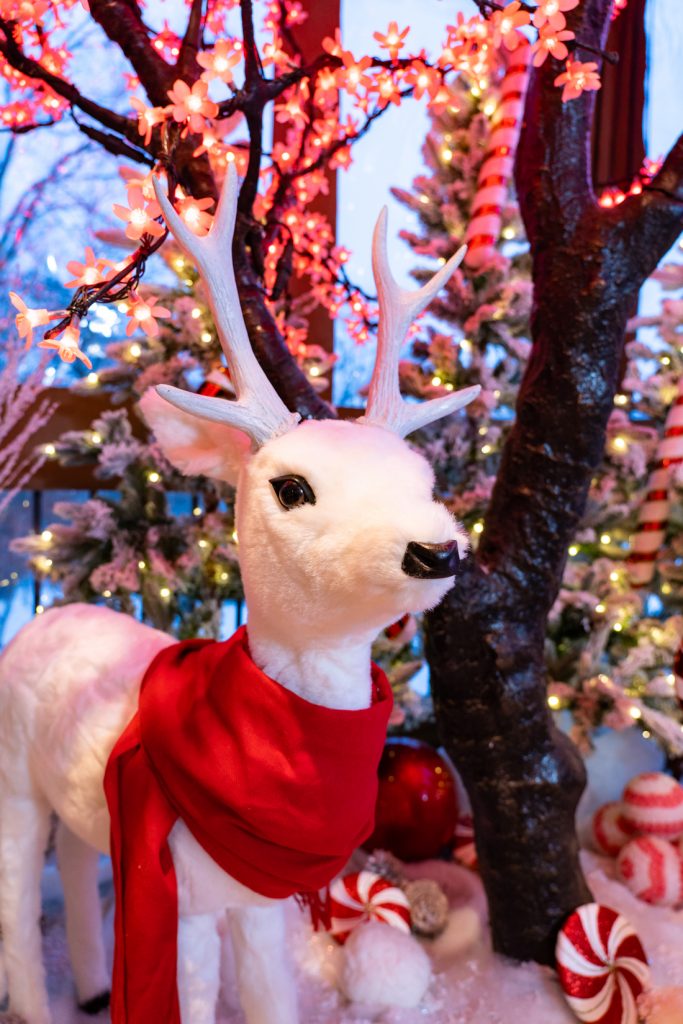 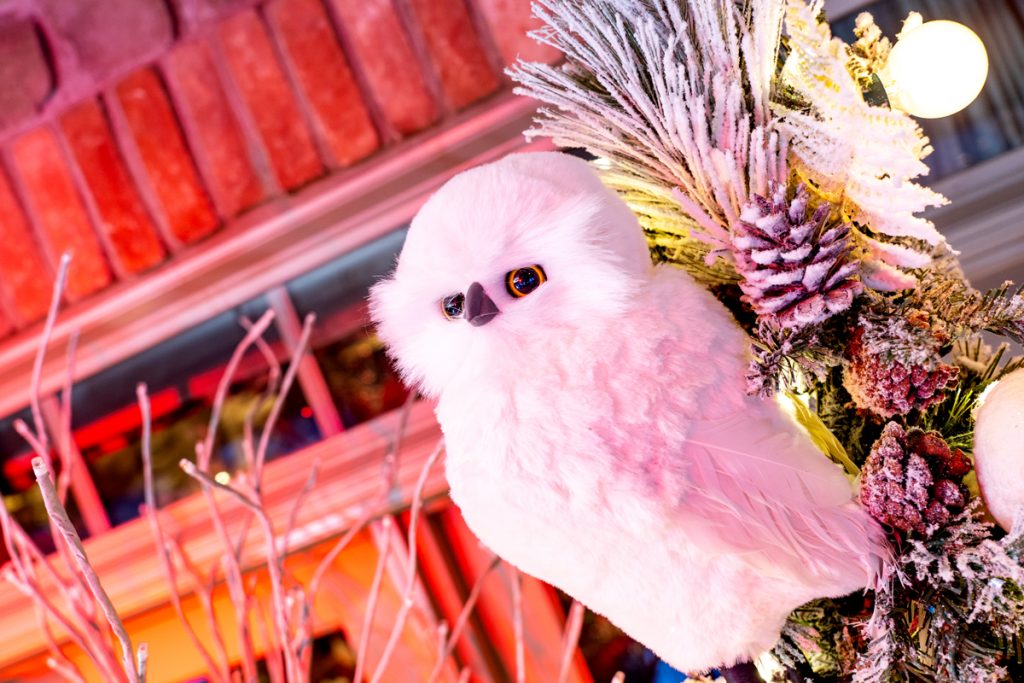 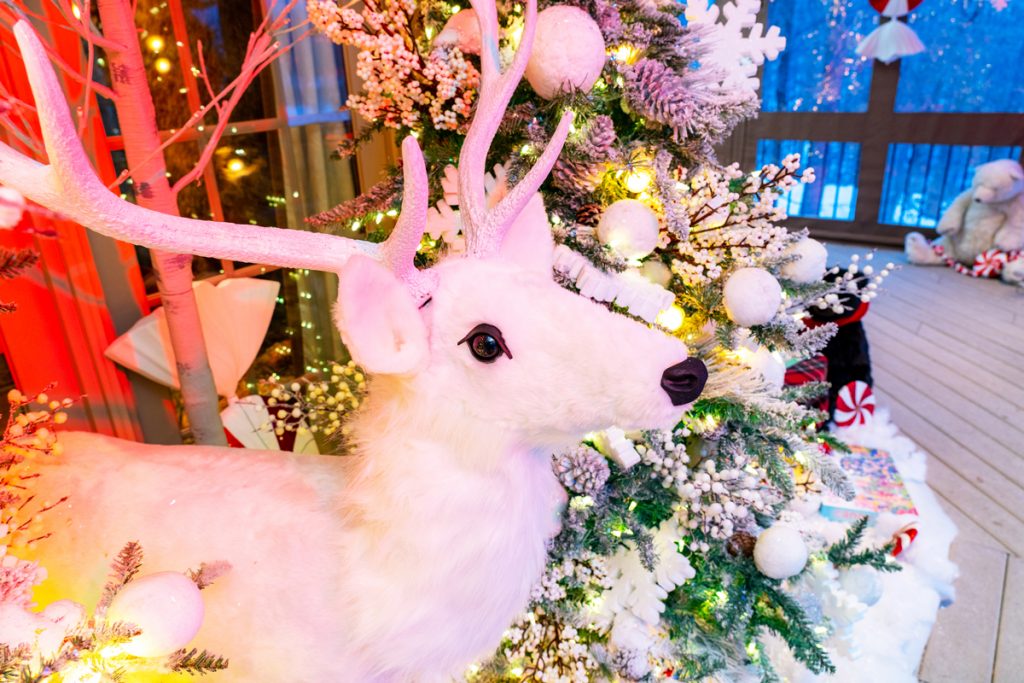 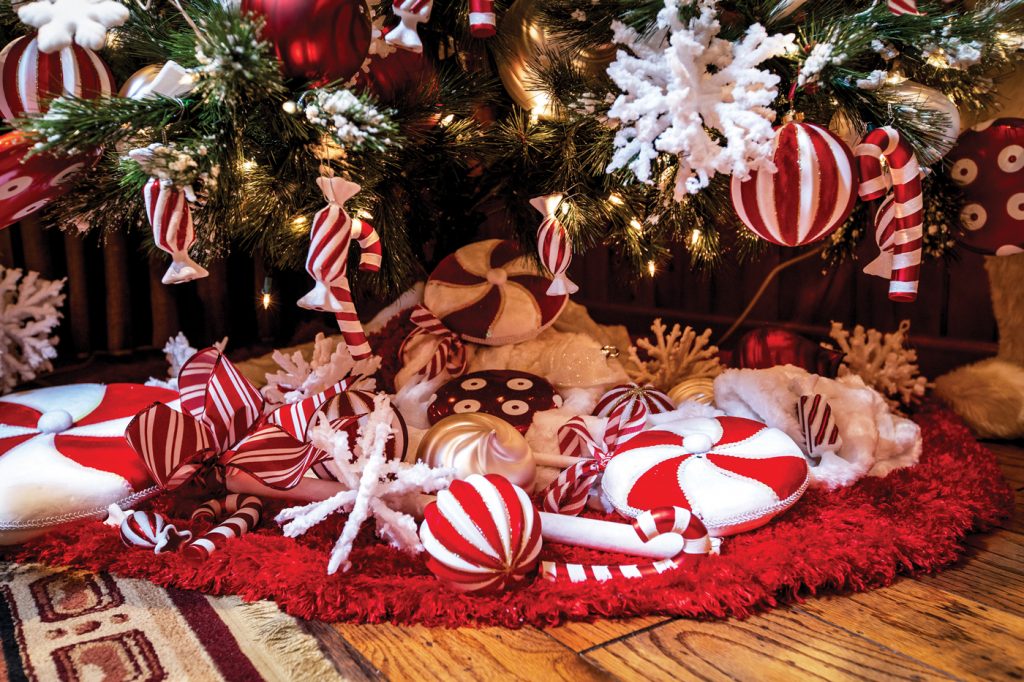 Decorating a tree doesn’t stop with the lowest limb – Tim uses ornaments and other items to decorate the floor beneath the tree. 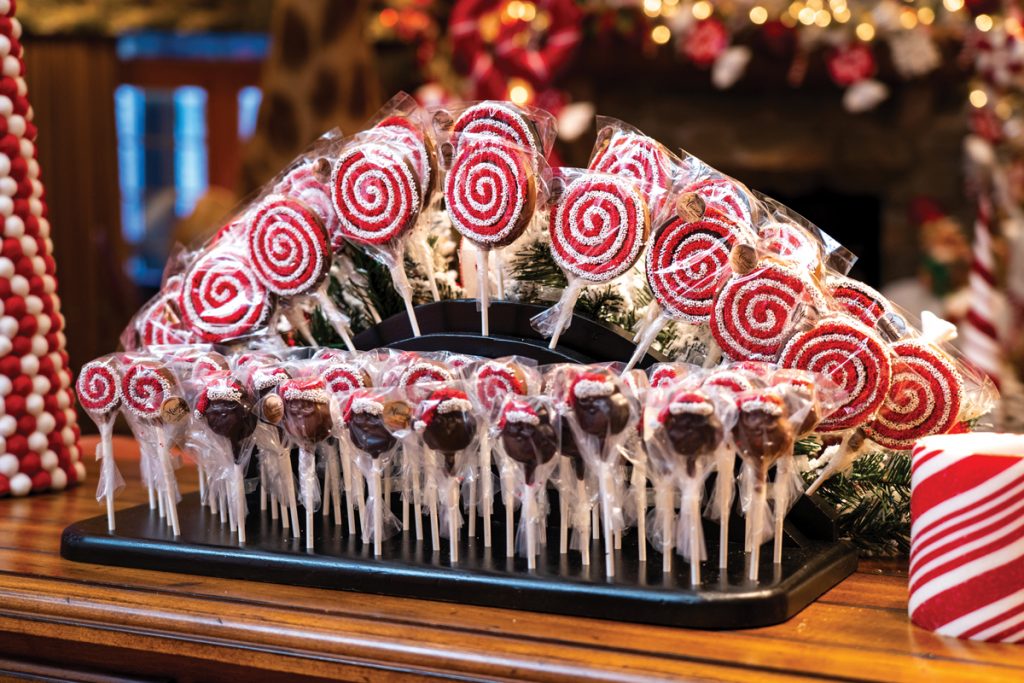 The candy – Tim worked with Tracy Artus of Miesse Candies on the design – was both decorative and edible. 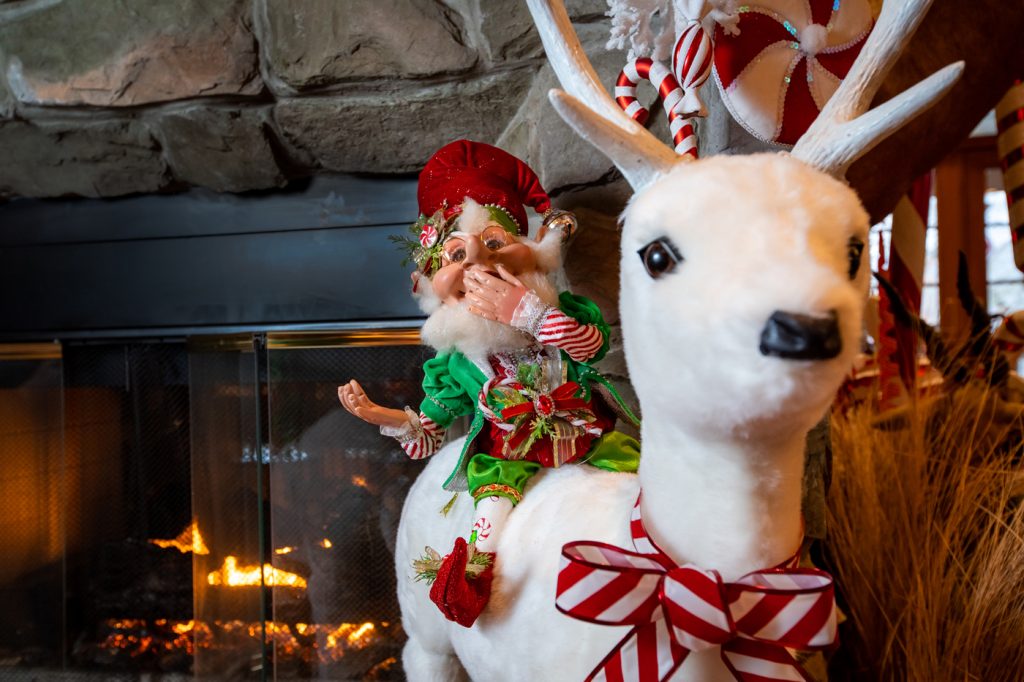 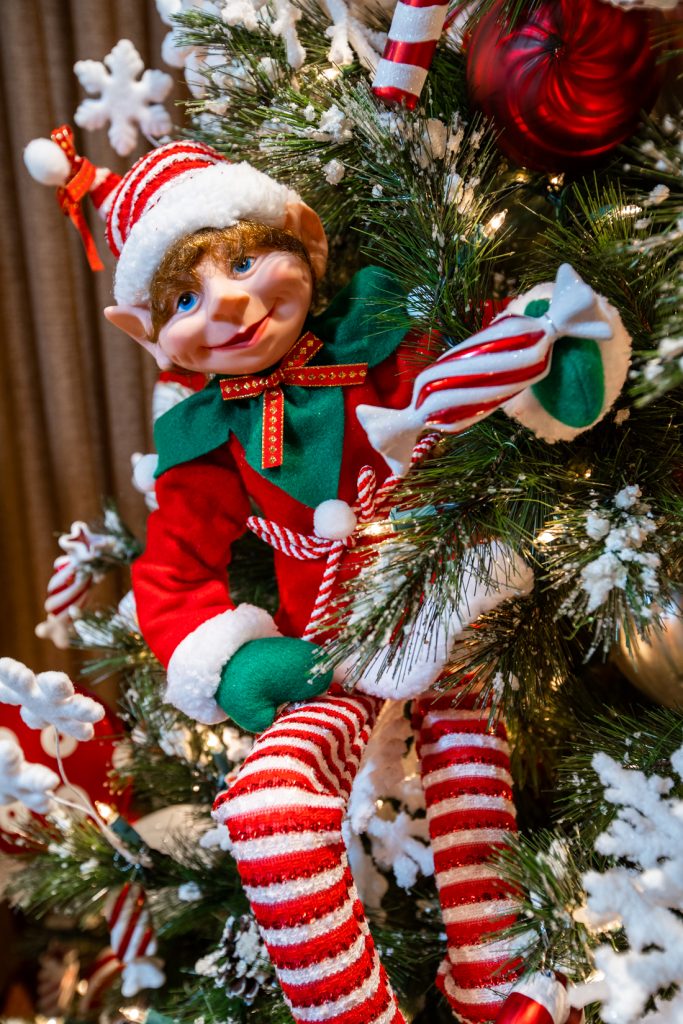 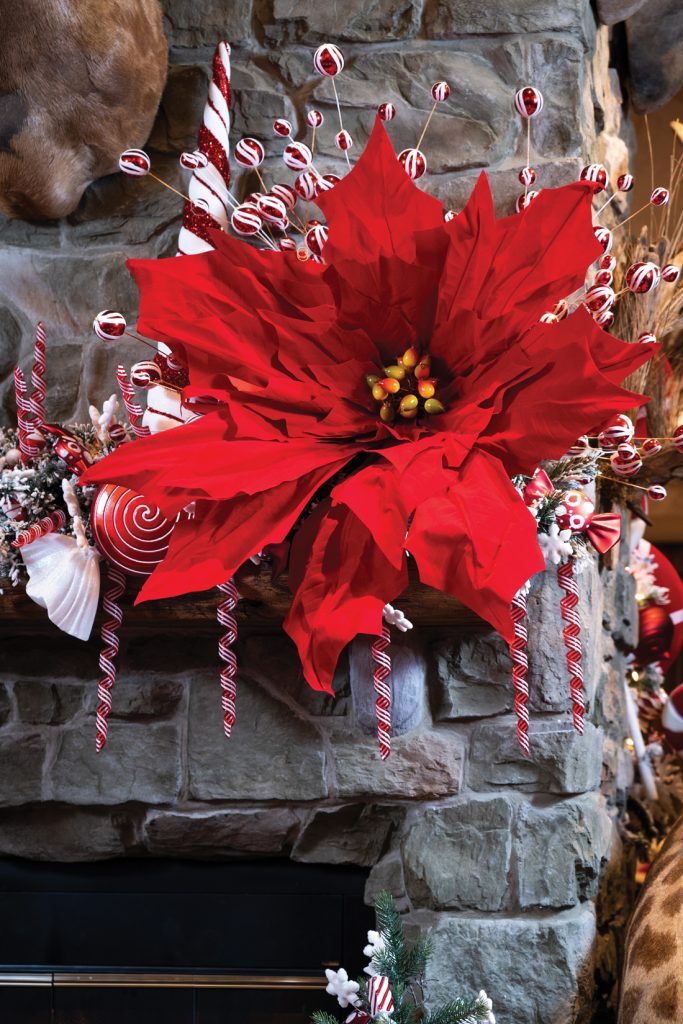 Tim utilized poinsettias made of felt in the dining room. 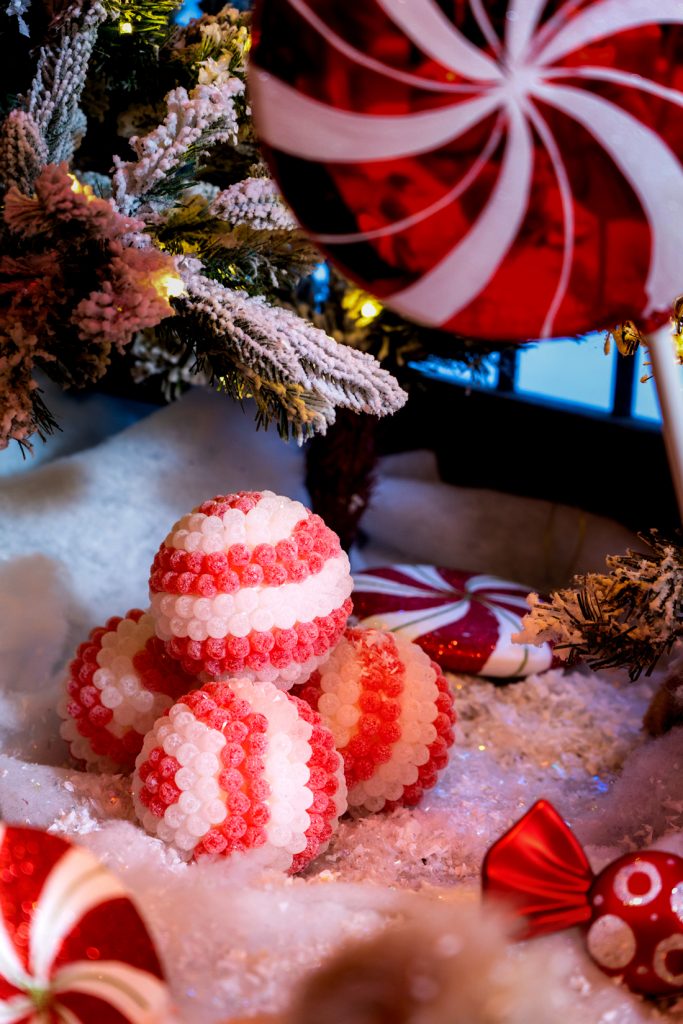 Last year, red and green uplights were used to illuminate the towering trees on the Martins’ property.