Sheri Smoker of Room with a View offers her observations on the home trends forecast for 2017.

In Sheri’s opinion, traditional design continues to be the definitive look of Lancaster County. “It’s who we are,” she says. “And, there’s nothing wrong with that. Every region seems to be defined by a look. Here, we like our antiques and quilts. When I work in Maine or Minnesota, my clients like to celebrate the woods and the lakes that define their states.”

But, even in South Central Pennsylvania, tastes widely vary. “There’s a huge taste difference between Harrisburg and Lancaster,” she says, noting that clients in Harrisburg prefer modern, contemporary looks.

But even traditional styling has evolved to reflect our casual way of life. Traditional chairs and sofas are no longer associated with words such as stiff and uncomfortable. Window coverings no longer plunge a room into darkness. Matching tables, chairs and lamps are so yesterday. It’s perfectly alright to mix finishes. Wall color is moving away from drama and in a more atmospheric direction. And, you’re welcome to incorporate finds and pieces you simply love into a room that is traditional by design. In a nutshell, that defines Sheri’s personal style. “I guess you could call it eclectic,” she says of her own home that combines elements of Shaker (kitchen), mid-century (dining room), Victorian (guest bedroom) and traditional (living room). Together, they look right at home in a house that was built in the 1800s.

Sheri is always anxious to see what is on display at the International Home Furnishings Market that is held twice a year in High Point, North Carolina. “It’s always interesting to see the trends,” she continues. “I can incorporate them into my work to some extent. But, to drop in the entire look? That probably would not go over in Lancaster.” 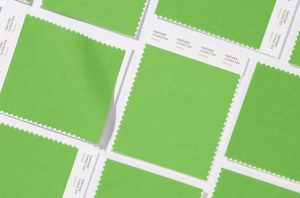 Pantone Institute’s Color of the Year, is popping up in accessories. 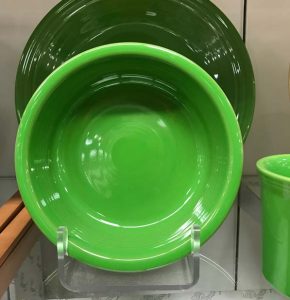 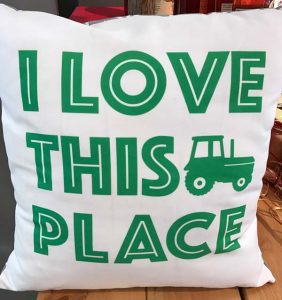 The pillow is from the Bon-Ton’s Close to Home department.

Undoubtedly, you’ve seen the Pantone Color Institute’s Color of the Year for 2017: Greenery. Described as a “fresh and zesty” shade of green, the versatile hue pairs well with neutrals, brights, pastels, metallics and jewel tones. It is associated with buzzwords such as revive, restore and renew. Obviously, it provides a link to nature. Sheri points to the greenery of Mother Nature, noting there isn’t a color on earth that it doesn’t complement.

Paint companies have also launched their own “Color of the Year” programs. For example, Benjamin-Moore is touting a color called Shadow, a dramatic gray that “ebbs and flows” with its surroundings.

Gray, by the way, is evolving. The hue is being tinged with hints of blue, lilac and brown. Sherwin-Williams drives that point home with its Color of the Year, Poised Taupe, which is described as a “timeless neutral that’s both modern and classic.”

Behr Paints takes it a step further by introducing a palette of limited-edition hues, which this year is classified as Comfortable (pastels), Composed (earth and jewel tones) and Confident (adventurous and fun). 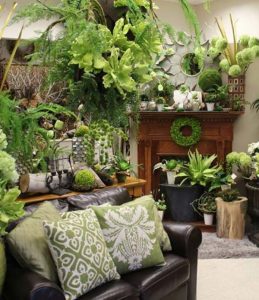 At Floral Designs of Mount Joy, you can’t get any “greener” than with plants (both faux and real). Note the throw pillows, as well. 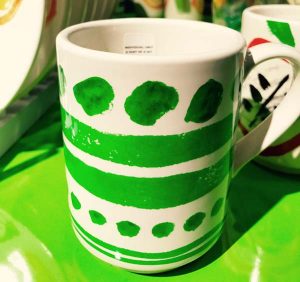 The coffee cup is from Kate Spade. 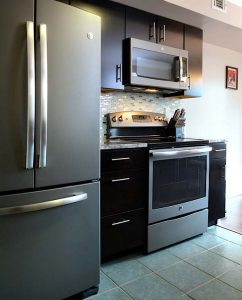 From GE Appliances: Matte black is the new alternative to stainless. 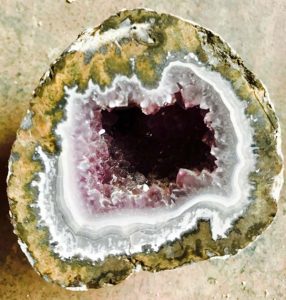 Geodes and other intergalactic touches are the hot new way to accessorize.

Think geodes and motifs of the sun, moon and stars. “People are gravitating towards things that are real,” says Sheri, “and you can’t get more real than the solar system.”

This time-honored metal is being used to create faucets for the kitchen and bath. The new trend is also utilizing straightforward plumbing fixtures for a minimalist urban look. Copper is also part of the metallic trend in accessories such as accent pillows, etc. 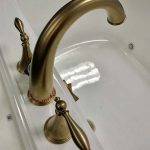 As seen at Hajoca: Coppery hues are gaining favor in the bath and kitchen. Copper is also part of the metallic trend in fabrics (pillow from Floral Designs of Mount Joy). 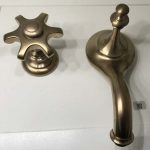 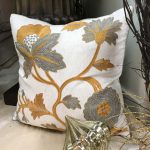 Look for geometics, op-art, florals, botanicals, wood textures and designs inspired by the Mission and Arts & Crafts movements of the past. “It’s big, and we’re going to be seeing more of it,” Sheri says. Tile manufacturer Ann Sacks has joined the revival with a line of tile called MADE by Ann Sacks. The artisan-inspired designs bear the tagline: “Rich in heritage, traditional in craft and modern in scope.” 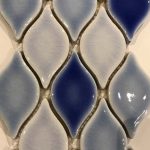 Tile is no longer square! As seen at Martin’s Flooring, styles inspired by river rocks, the ‘70s and the ‘60s. 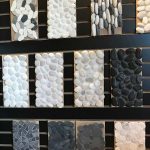 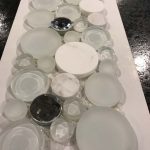 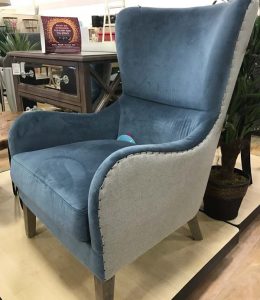 As seen at HomeGoods: A velvet-covered chair from Tommy Hilfiger.

It’s said that home décor follows fashion, and during fall/winter 2016, velvet was the definitive fabric. Now, it’s making its way home as upholstery and drapery fabric. “It’s huge right now,” Sheri affirms. “It’s being included in all the fabric books.” 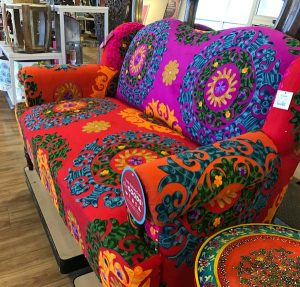 Eye-popping jewel tones converge on this sofa seen at HomeGoods. 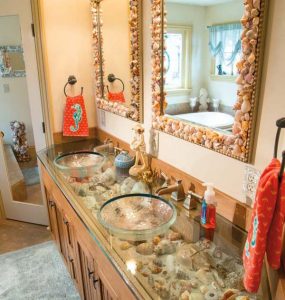 Natural elements such as shells add subtle color and texture to this bathroom that was designed by Donald Dale and Andrea and Jim Schopf.

According to Sheri, items such as shells, geodes, driftwood, pottery and plants relate to our desire for “wanting a cleaner palette.” Such items also provide a way to naturally add texture to a space. 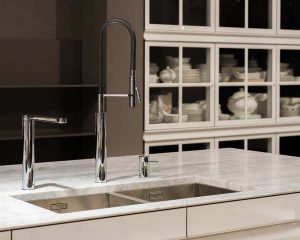 Marble looks at home in kitchens of all styles. 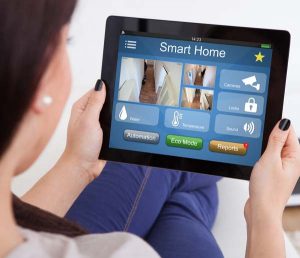 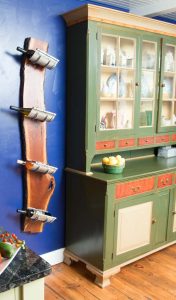 According to Sheri, “It goes along with the easy lifestyle looks” that define the way we live. 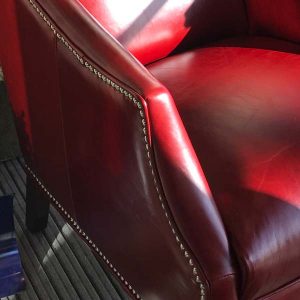 From Wolf Furniture, a traditional chair is updated with red leather and nailhead detailing. 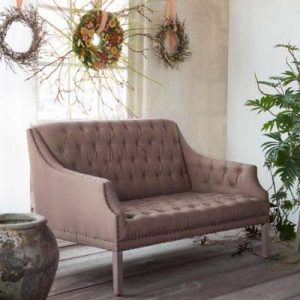 Such detailing is being used to dress up the simple lines of today’s furniture. “I’m seeing a lot of it,” Sheri says. 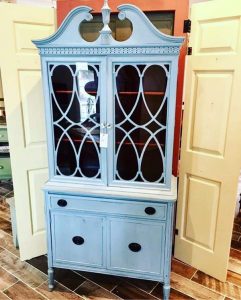 Repurposed furniture is a favorite of the millennials. This repurposed piece was transformed with a paint color (Nightfall) from Country Chic. It’s from Always Never Done in Landisville/Salunga.

Sheri maintains that this generation is a driving force in the home-decorating industry. This generation’s fondness of clean lines has led to a revival of Scandinavian and mid-century designs, as well as looks that are inspired by industrial/urban architectural elements. They’ve developed their own take on eclectic and mix old with new, expensive with inexpensive, and DIY with finds from their travels. Words like artisan, handmade and repurposed are dear to their hearts. Organic is another millennial hallmark that extends to fabrics, flooring and exposed brick and rafters.

“They don’t seem interested in acquiring ‘stuff’ for the long run,” Sheri observes. “They want to live simply and comfortably and be able to move on without having to worry about ‘things.’ For now, I think they would rather spend their money on travel and other experiences.” Speaking as a parent of millennial-aged children, she believes this generation perceives the creature comforts their baby boomer and Gen X parents have collected over their lifetimes as burdens and have no interest in it. 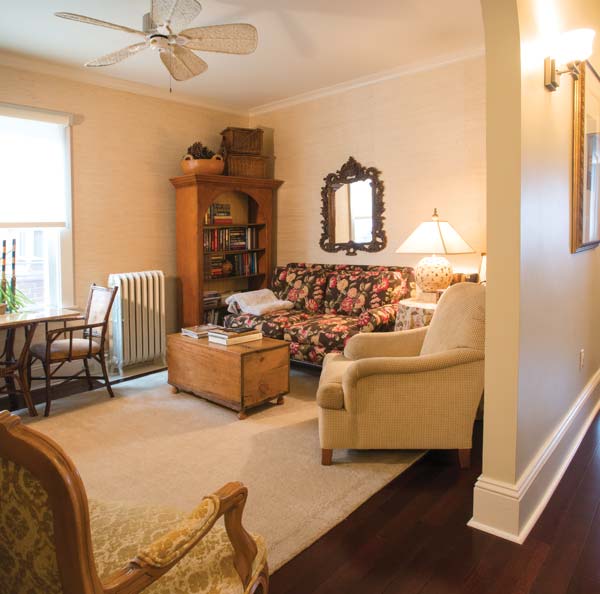