On March 20, 2013, Ginny Emswiler’s life dramatically changed when fire swept through her home in Maytown. “What wasn’t damaged by fire was destroyed by water and smoke,” she recalls. Included in the loss were 50 Christmas trees Ginny had stored in the attic, irreplaceable vintage ornaments and other holiday decorations.

Ginny had just arrived at her daughter’s residence in Lititz when another daughter – four of her seven children live along the same road she lives on in Maytown – called to say she needed to return home. Her house was on fire. “You could see the smoke from Donegal High School [in Mount Joy],” she says. By the time she arrived in Maytown, the house was fully engulfed in flames.

The fire had started in a shed that was located beside the house. Paint and other items served as accelerants, which prompted the flames to wash over the house. The house was deemed a total loss. Ginny and her companion, Larry Beam, spent the next month living in a motel and then moved to an apartment complex in Marietta.

Ginny was determined to rebuild as quickly as possible. Her family was there to support her efforts, as were the people of Maytown. According to Ginny, dealing with the fire’s aftermath was “a big learning curve. People came out of the woodwork to help.” Ginny says a lot of townspeople felt as if they had lost their second home, as the Emswiler house was the one where kids had always gathered and flower lovers stopped to discuss gardening. Pool parties were a regular happening. “Most of the firemen who fought the fire were very familiar with the layout of the house,” she notes.

The Emswiler house had also become known for its Christmas displays. “My husband was a hunter, so I spent hunting season decorating my house for the holidays,” Ginny explains.  Twenty-five years ago, she took note that many of the women she worked with had husbands who were hunters, so she decided to throw a party. “I invited a few of them to my house to see the seven trees I had decorated,” she recalls. The combination of refreshments, food and camaraderie deemed the party a success. “The next year, they asked if I would be having another party. I said I suppose I could. So, I decorated more trees and invited more women.”

The party, which has evolved into an open house, continues to revolve around hunting season, as it’s held the weekend after Thanksgiving, as well as the following weekend. Ginny goes into high gear well before Halloween in order to have the house looking festive for the open houses. Over the course of the two weekends, 150+ people tour the house. “Some of those people have been with me since the first year,” Ginny notes. Smaller parties are held during the course of the holiday season for groups that are comprised of former co-workers and close friends. While women once dominated the guest lists, Ginny says now it’s evenly divided between men and women.

The original trees, which ranged in size from tabletop to ceiling height, were decorated with ornaments that harkened to Ginny’s childhood, keepsakes her children made in school, homemade items and finds discovered in favorite stores. Eventually, she had so many ornaments that she devised theme trees.

Of course, christmas was the first thing that popped into Ginny’s head as she surveyed the damage. “Paul Davis Restoration came that night,” she recalls. “They put everything that was in the basement up on blocks in order to get it out of the water.” The attic was destroyed. According to a fireman on the scene, the 50 trees stored there had melted into a plastic mess. She instinctively knew her vintage ornaments were goners, as were her 72 Byers Choice Santas and carolers. “I lost a lot of antiques, too,” she says.

Ginny told herself she couldn’t dwell on her loss. She had to rebuild her home of 44 years. Fortunately, remodeling wasn’t new to Ginny. “My husband used to joke that we had done everything to this house but turn it around,” she says. Ginny shares that she also takes on projects as a means to deal with stress. Following her husband’s death in 2006, she undertook a major remodeling project that involved moving the kitchen from the house and relocating it to what was originally the garage, which had been previously “remodeled” to add a bedroom for one of the couple’s children.

Now, she had an entire house to design. Luckily, the solid construction – brick exterior walls and interior plaster walls – provided the bones for a new house. The original ranch-style house grew into a two-story Cape Cod. The kitchen was replicated, only this time a pantry was added, as was a two-sided fireplace. The three original bedrooms were transformed into a modern master suite. What had been a covered porch that spanned the back of the house is now a sunroom. A wide and winding staircase leads to the second floor, where five bedrooms and two baths are now located. “It was a lot of fun designing the house,” Ginny admits.

As Christmas Eve approached, Ginny informed personnel from Paul Davis Restoration that she would be having a party at the house. “The place was still a shell, but that didn’t matter,” she says. “The kids were so excited,” she recalls of their reaction to being told the party was on. She was touched that the construction workers made a special effort to clean the spaces the family would be using and that the plumber was able to hook up a sink for the occasion. “Life doesn’t have to be perfect,” Ginny theorizes. “It’s the little things that make memories.”

Knowing how much Christmas meant to Ginny, friends and strangers reached out, donating trees, ornaments, lights, etc.  Before she knew it, Ginny had 40+ trees. Then, out of the blue, a member of the church Ginny attends called to say his late wife also collected Byers Choice and that she was welcome to look over the collection and take what she wanted. “Twenty or so were exactly like the ones I lost,” Ginny says. One was especially meaningful: the Santa wearing a white coat was exactly like the one her son had given her. “That one essentially launched my collection,” she says. In the end, Ginny took 50 from the woman’s collection.

This year Ginny plans to give back. One of the trees is serving as a benefit for the American Cancer Society. Visitors will be able to insert donations into the clothes pins that adorn the tree.

Ginny also plans to resurrect the tradition of decorating the outdoor areas of her property. (Her past displays were traffic stoppers and attracted the attention of WGAL and LNP.) “When I get tired, I’ll stop,” she says. But for the time being, she’s content to “watch people enjoy themselves,” adding, “the lights always seem to cheer people up.” 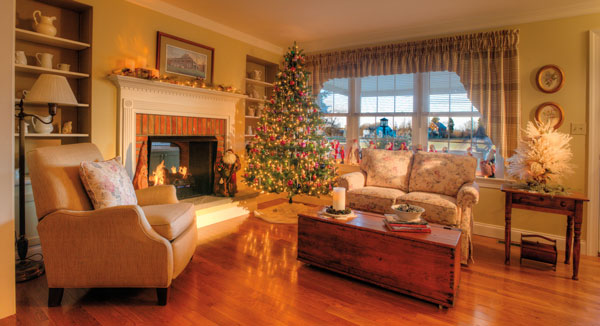 The tree in the living room traditionally held Ginny’s beloved vintage ornaments. Unfortunately, they were destroyed in the fire. Last Christmas the tree was filled with replacements that were both purchased by Ginny and given to her as gifts. The room is also filled with Byers Choice Santas and carolers that a member of Ginny’s church provided to replace the ones she lost.