Three years ago, Matthew Sware decided to buy a house. He found what he deemed a “perfect challenge” in Strasburg and set to work remodeling it. Then, Rachel Sommer came into his life …

You might say Matthew is a bit of a Renaissance Man. He’s fascinated by architecture, history, art, music, food, cooking … the list goes on and on. He’s especially passionate about mid-century modern everything. His home is a reflection of all his interests.

Like other members of his generation, Matthew was anxious to become a homeowner on his terms. He wanted an interesting and comfortable home with minimal maintenance issues. He also wanted to be part of a community. He set his sights on a small house in Strasburg.

The house dates to 1785. “It had really mutated over the years,” Matthew says, referring to the many remodeling projects that had been carried out. The earliest involved an actual move: The house had been rolled from the adjacent lot and relocated next door (where it gained a basement). A dormer had been added. German siding, which covered the original log construction, was overlaid by aluminum siding at some point. Pink and gray tile indicated the bathroom had been updated in the 60s.

Cosmetically speaking, the house had its share of challenges. The floors were thick with layers of carpet, linoleum and glue. All the windows had been painted shut. Every wall in the house was wallpapered. “Oh, and nothing was straight,” Matthew says of the walls and ceilings. Fortunately, it was in relatively good shape. “I had a retired home-engineering friend and my neighbor, Chris Lainhoff, of Museum Quality Building Restoration, look it over,” Matthew reports.

Matthew was determined to do much of the work himself, figuring he’d devote nights and weekends to the project. His first goal was to open up the claustrophobic first floor, which was divided into three small rooms. “I just went in and started taking down walls,” he explains. In doing so, a summer beam – the precursor to load-bearing walls – was revealed. “It had been plastered over,” Matthew explains of the steel-like beam that had been carved from an American chestnut tree. Matthew deemed it a keeper.

Another treasure was unveiled once the floors were scraped of the layers of carpet, linoleum and glue. White pine covered the floors in the living area. “They were original,” Matthew says, pointing out the Roman numeral tracking marks he found on several of them and explaining the random sizes related to their price tag. “You paid by the cut,” he notes. While the floor in the kitchen was not original, Matthew surmised the yellow pine boards had served as a subfloor at one time and worked to revive them. He managed to save both floors by hand scraping them and using a 5-inch orbital sander to refinish them. Traditional shellac added just the right sheen.

Matthew is a member of a choral group at St. James Episcopal that specializes in early and traditional music. Folk/fraktur artist Lynn Sommer is a member of the group. Her daughter, Rachel, was borrowing her car and agreed to pick Lynn up at the church after rehearsals. Lynn introduced the two, and soon Rachel was joining the group for after-rehearsal gatherings. Rachel and Matthew clicked; however the timing wasn’t the greatest. Matthew was only two months into his remodeling/restoration project. “I explained to her that my time was committed to the house, and she was fine with it,” Matthew recalls. It soon became their project. “We learned to compromise on details,” Matthew reports. They were married in the spring of 2015.

The Kindness of Neighbors

Matthew says he could not have completed the project without the support of friends, family and neighbors. Chris Lainhoff provided “invaluable help. He’d help me nights and weekends,” Matthew reports. Furniture maker extraordinaire Steve Van Ormer also served as a consultant and refinished the dining room table. Lynn Sommer and fellow folk artist, Jim King, turned the staircase into a work of art. Dwayne Lapp did his magic and was able to seamlessly merge plaster and drywall surfaces. “Family and friends always showed up for our painting days,” Matthew says.

He’s especially grateful to the Strasburg Heritage Society, which was incorporated in 1972 and established the town’s 2-mile-long historic district. “They were a real help,” he says of the advice and expertise members provided. “The Heritage Society is a real treasure.”

Matthew and Rachel devised a traditional meets mid-century modern vibe for their home, which was deemed finished last October. “It was a two-year project,” Matthew notes. While it doesn’t fit the definition of a “tiny house” that is currently all the rage on home-design television shows, at 1,200 square feet it’s certainly no McMansion. “We wanted a house we could live in,” Matthew remarks. “I think it proves what you can do with a little bit of space.”

“We love living in Strasburg,” Matthew continues, naming its friendliness, sense of community pride and walkability as favorite aspects of small-town living. No matter which direction they turn, “We’re within minutes of coffee shops,” he points out. 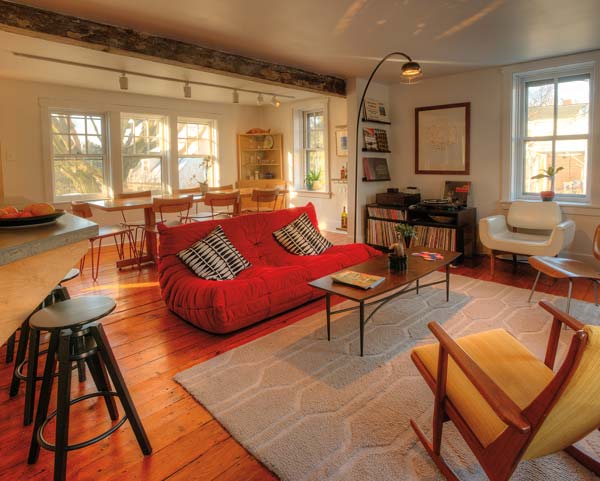 Matthew’s love of mid-century modern is evident in the living room, which is furnished with a variety of chairs and a Togo Sofa from the French company Ligne Roset. Matthew relies on a turntable to listen to his vinyl collection that ranges from classical to jazz, with a bit of modern indie rock. The white walls are hung with art that was provided by friends and family.