Last July I visited my son, Charlie, and his wife, Jenn, for the first time following their move to North Carolina. The first thing he asked upon my arrival was, “When were you planning to leave?” Seeing the look on my face prompted him to explain that he was representing his company at a “key ceremony” that Saturday, during which a Marine veteran who had been injured in Afghanistan would receive the key to his new home. He thought I might like to go. He also sweet talked me into making a donation to the organization that was sponsoring the event, Homes For Our Troops (HFOT). 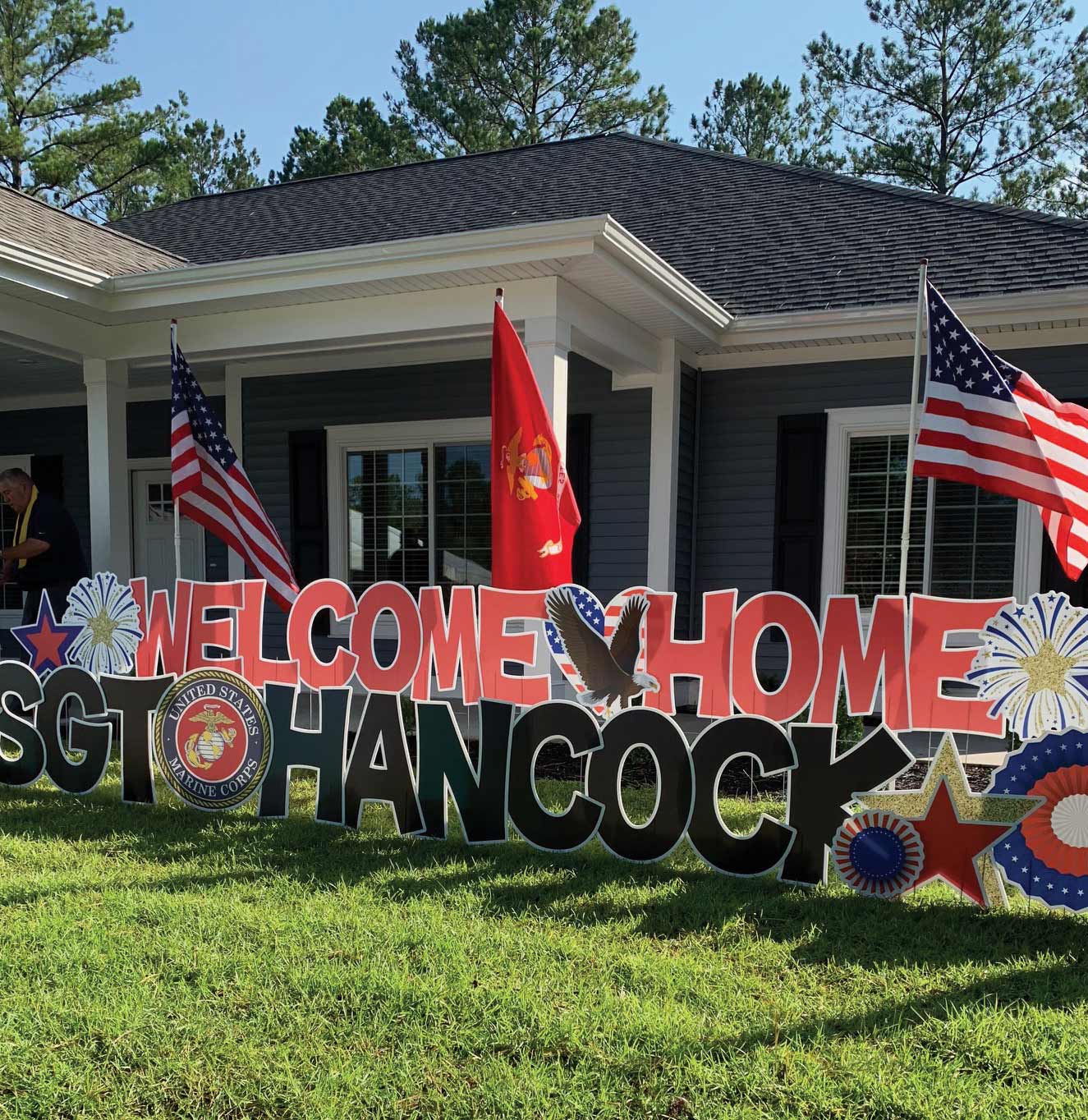 The Homes For Our Troops key ceremony was held in Jacksonville, North Carolina, on July 10, 2021.

The company Charlie works for – United States Cold Storage – had adopted Homes For Our Troops as its charity for 2021. Each site was raising money for the organization and in the case of the Fayetteville plant, was providing volunteer manpower during the building process of an HFOT house in Jacksonville, which is home to Camp Lejeune. Charlie had gone to Jacksonville several times to help with landscaping projects at the house.

I agreed to go, assuming it would be a low-key, short and simple ceremony in which a few people would say a couple of words and then hand the house over to the recipient. I’d probably be on the road by 10. Think again!

As it turned out, it was quite the affair with a parade, a color guard, a flag ceremony, tours of the house and speeches – lots of speeches – that started with Senator Thom Tillis and Congressman Gregory Murphy and continued with several spokespersons for other Congressional representatives, as well as Senator Richard Burr. Then, the state and local politicians said their peace. I kept thinking, “And, Charlie’s going to give a speech?” Finally, his turn came. I held my breath. He did such a stellar job that I thought to myself, “Where’s my kid and what did you do with him?” 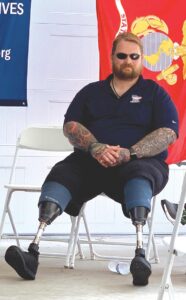 During his second deployment to Afghanistan in 2011, Sgt. Chris Hancock was leading a patrol when an IED detonated, causing him to lose both of his legs.

The last person to speak was Chris Hancock, who would soon become the owner of the beautiful house. Chris, who hails from a military family in Tennessee, joined the Marines soon after graduating from high school. He was also motivated to serve his country by the events of 9/11. His role as a combat engineer took him to Japan, China, Guam, Australia and finally Afghanistan. He loved experiencing the various cultures.

During his second deployment to Afghanistan in 2011, he was leading a battalion patrol in the Sangin Valley. As the point man, it was his job to detect explosives. During a sweep, Chris detected a device. An improvised explosive device (IED) immediately detonated. The blast caused Chris to lose both of his legs. He ultimately spent months recovering at Walter Reed Medical Center, where he underwent a combination of 50 surgeries and blood transfusions.

He shared with the audience how much having such a house meant to him and his son – being able to easily maneuver in a wheelchair and have access to kitchen appliances and a spa-like bathroom would be life changing.

Homes For Our Troops was established in Massachusetts in 2004, when a general contractor offered to build a home for a veteran who had been injured in Iraq. The vet agreed to the proposal on the condition that the contractor would work with other injured vets to provide them with accessible homes. Out of that gesture Homes For Our Troops was born. Based in Taunton, Massachusetts, the organization’s mission remains the same: to build specially adapted custom homes and donate them to severely injured post-9/11 veterans. 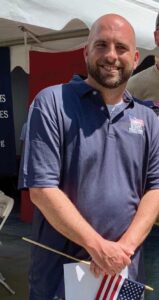 Charlie Long was the spokesperson for United States Cold Storage at the key ceremony.

Providing such veterans with accessible homes has helped them and their families rebuild their lives. Typically, 15% of such veterans pursue college degrees or trade certification following their military service. The percentage climbs to 71% for HFOT vets. Becoming employed climbs to 99.5%.

As of January, HFOT has provided 325 veterans with homes that go beyond being VA and ADA compliant. Each home bears the same design – 2,800 square feet of one-floor, open-concept living, with four bedrooms and two baths. The adapted floor plan features wider hallways and entry doorways; automatic door openers; roll-under sinks, stovetops and counters; pull-down shelving; sliding windows; digital temperature controls for water; roll-in showers; light switches positioned at wheelchair height and the list goes on. Chris’s house is gorgeous. Best of all, it’s paid for. His responsibilities extend to home insurance
and taxes. 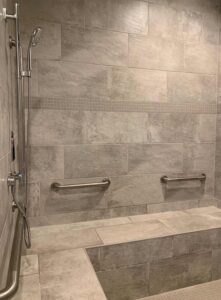 The primary bathroom in an HFOT house features a spa-like, roll-in shower.

Vets apply to participate in the program and once accepted – they must satisfy certain criteria – take part in a series of interviews and seminars relating to financial planning, budgeting, etc. Participants choose where they will live. Some obviously want to be close to family, while others prefer to stay connected to the military. Others need to stay in close proximity to medical centers. Still others have bonded with the artistic engineers who create prosthetics that allow vets to regain movement and mobility. Thanks to ever-improving technology, prosthetics have helped to change the lives of vets, hence they feel very connected to the teams they work with.

The entire process – from applying to the key ceremony – takes an average of 24 to 36 months. At present, 70 projects are on the drawing board. Two projects are underway in Pennsylvania, one in the western sector of the state and the other in the Northeast. 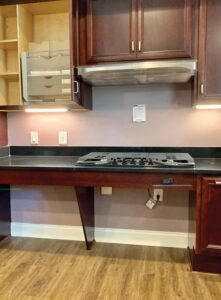 The kitchen in an HFOT house is outfitted with roll-under counters.

Homes For Our Troops is publicly funded with 65% of operating costs donated by individuals, family foundations, community fundraisers, online auctions and other endeavors. The balance of HFOT’s budget is provided by corporate donations – both monetary and materials. Some of the more recognizable corporate partners whose products are seen in the houses include Budget Blinds, C.H.I. Overhead Doors, COREtec, OakCraft Elegant Cabinetry, Progress Lighting, Harvey Building Products, Wayfair, Shaw Industries, Sherwin-Williams, Silestone and Whirlpool. General contractors for the projects are chosen from the communities in which an HFOT house is being built. They, too, undergo a screening process and must agree to abide by HFOT’s blueprints, budget and schedules.

Attending the event was very moving – Chris shared by becoming a homeowner, he had finally achieved a sense of peace and looked forward to furthering his education, participating in Wounded Warrior athletic events and raising his son. “I look forward to what the future holds,” he told the audience.

The Homes For Our Troops key ceremony was held in Jacksonville, North Carolina, on July 10, 2021.