Own a large barn. Launch a food truck. Write a book. Buy a vintage truck and transform it into a maker’s truck. Be featured on HGTV. Support nonprofits. Blessings for our families. These are some of the goals and aspirations that comprise what Kristi Kreider and Nikki Stauffer call their “dream board.” It hangs on a wall in the office/workshop of their makers studio. 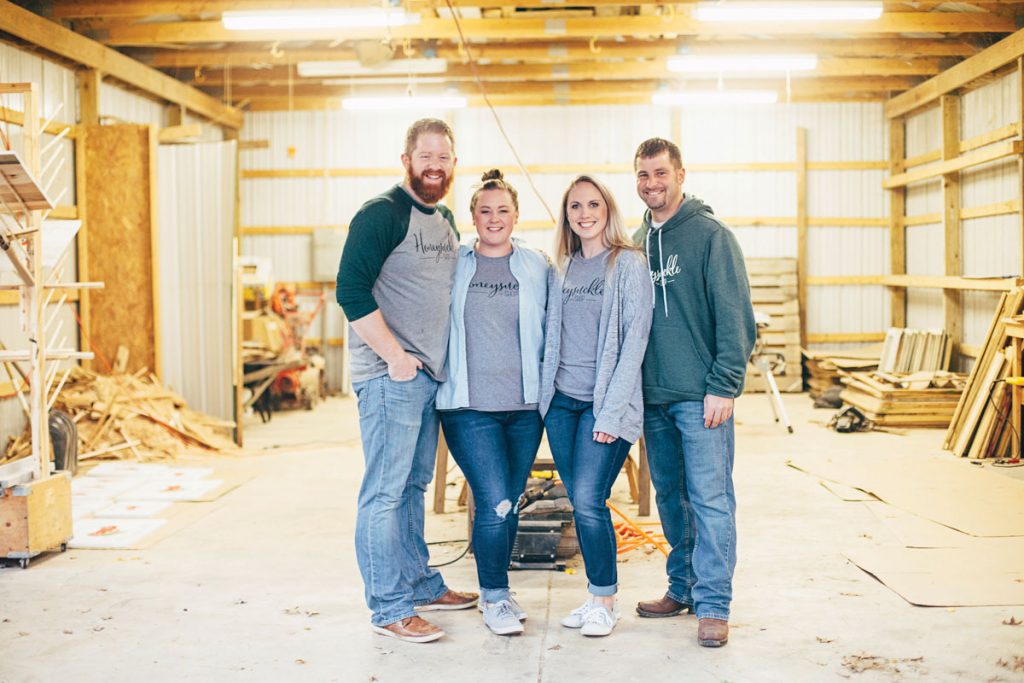 Kristi Kreider never considered herself to be artistic or creative. As a high school student, she was all about sports, especially field hockey. Married to Jake Kreider, she happily became a stay-at-home mom of three. 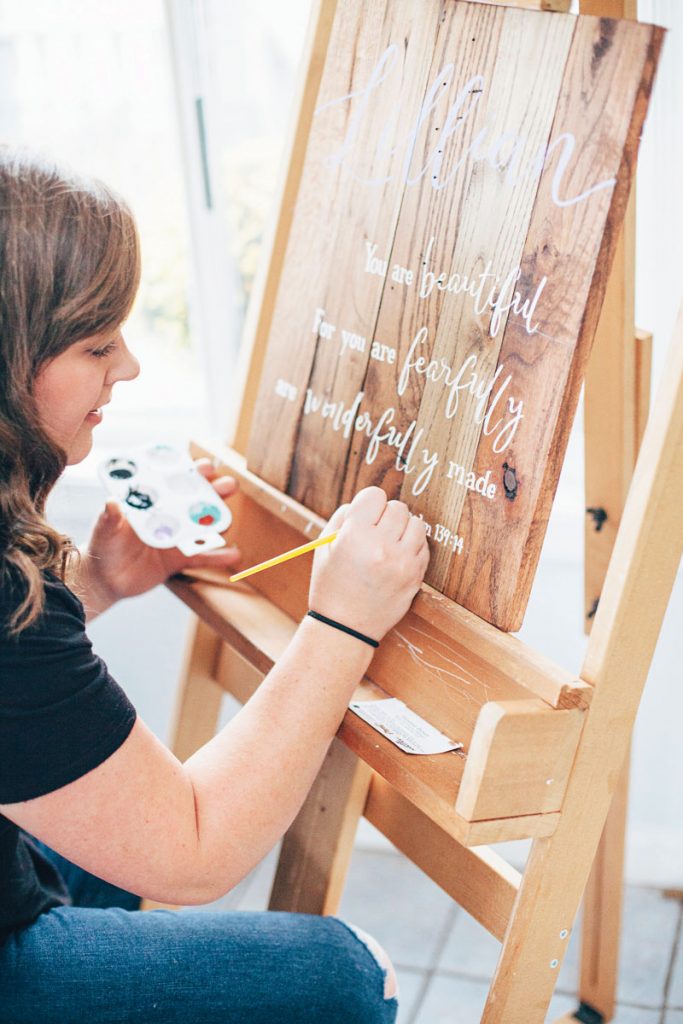 Kristi fell in love with painting when she worked with Jake to create a sign for their niece’s bedroom.

Nikki, however, has always been creative, but exploring her talents was not always easy. She, too, is a stay-at-home mom to two children and often provides childcare for friends and family. She also became her husband Jeremy’s right-hand woman, overseeing the office work for his spouting company. She has even been a driver for Grubhub.

Kristi and Nikki’s paths crossed in 2018.

The Honeysuckle story actually dates back to 2015. In need of bookshelves for their daughter’s room, Jake created a pair out of discarded pallets. Kristi was so impressed that she posted a picture to Facebook, and within 24 hours they had received 300 inquires and orders. The couple spent the summer creating bookshelves the old-fashioned way, aided only by a hacksaw, chisel and hammer. Oh, and Kristi was pregnant. And, Jake had a full-time job. “We’d work until 1 a.m. during the week and all weekend,” she recalls. 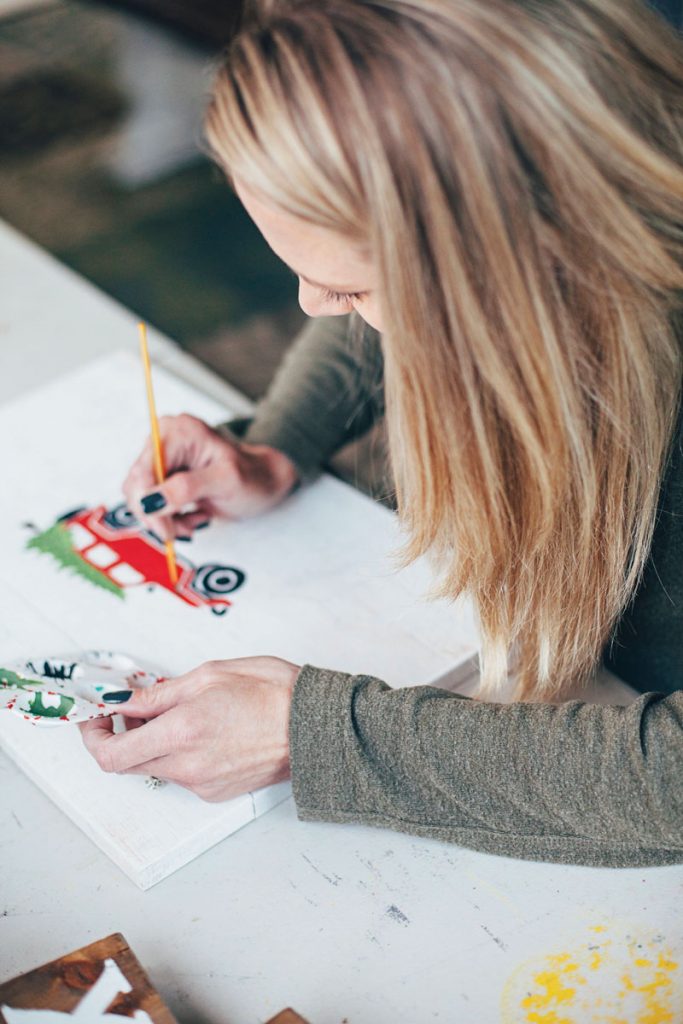 Nikki works on a holiday motif.

Once that task was accomplished, Jake’s sister asked if they could create a sign for her daughter’s room. “That’s when I fell in love with painting,” Kristi says of the message she hand-painted on the sign. A new venture took wing, with Jake crafting signs from salvaged wood and Kristi hand-painting them with messages that convey hope, encouragement, humor and the word of God. “We sort of stumbled into becoming makers,” Kristi remarks, adding that Jake inherited his woodworking skills from his father, who was “very handy” with tools.

The furniture and decorative items the two were creating meshed perfectly with the modern farmhouse look that Chip and Joanna Gaines made famous on their HGTV show, Fixer Upper, and put Waco, Texas, on the map as the home-decorating capital of the United States, because of their Magnolia Home empire. While Baby Boomers have heeded Martha Stewart’s every word since she burst onto the scene, it seems the Gen-Xers and Millennials are on team Gaines. Peruse the displays at makers markets from coast-to-coast, and you’ll see Joanna Gaines’ influence everywhere.

The success of Honeysuckle Shop was immediate. The Kreiders outgrew their home and moved to a farmette near Manheim that provided Jake with a spacious workshop. It allowed Kristi to begin offering workshops and classes in her studio. Still, by the summer of 2018, Kristi was feeling overwhelmed. Creating merchandise and overseeing its shipment was keeping her on her toes. Add to that the fact that Jake was the general manager of an auto dealership in Lebanon County, and it was becoming obvious they needed help. “I began praying,” Kristi states. “I asked God to send me someone who has the same passion and vision I have.” 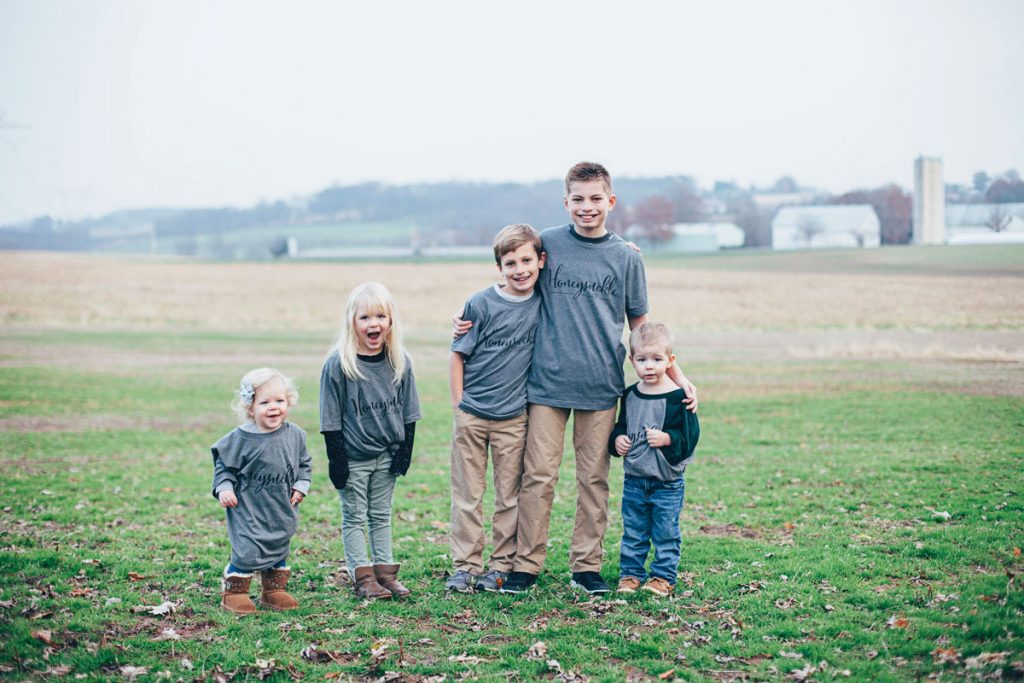 The couples’ five children are their motivation for creating a successful business.

In October, Kristi’s prayers were answered when Nikki took a class at Honeysuckle Shop. (She also happened to be one of the shop’s most devoted customers.) During the class, Kristi mentioned she needed help in the shipping department, and Nikki offered her services. Kristi invited her to come back for a chat, and Nikki offered to bring lunch. She showed up with take-out from Chipotle, which unbeknownst to her is Kristi’s favorite restaurant. “She got here at 11 a.m., and we talked non-stop until 1 p.m.,” Kristi recalls. “Meeting with her, I realized we shared the same vision but brought different talents to the table.” 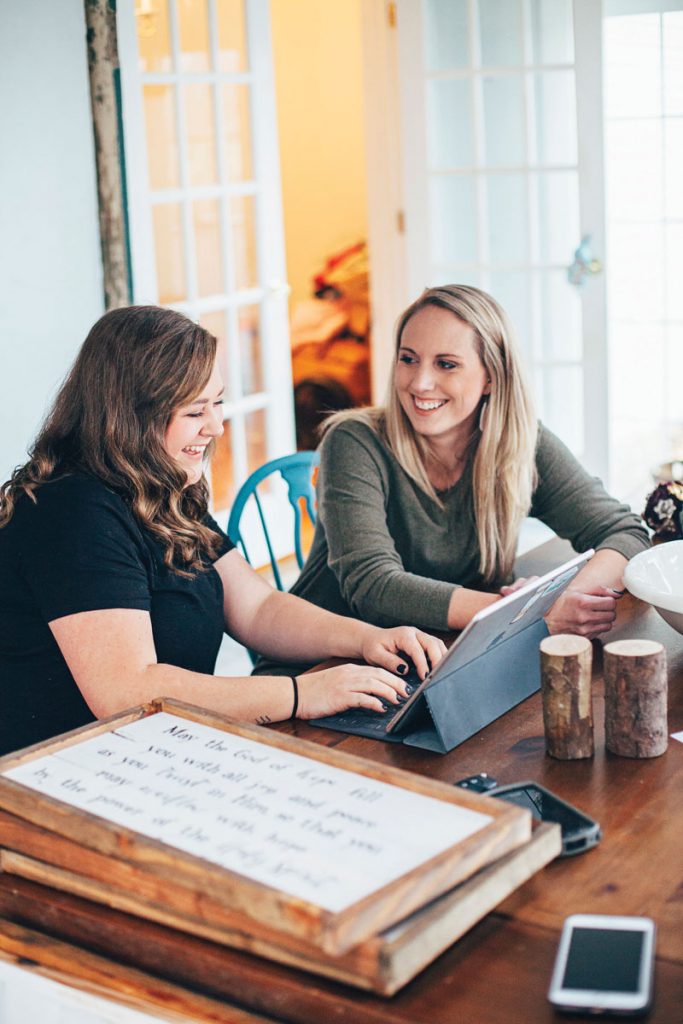 Kristi and Nikki collaborate on projects in their studio.

The idea of forging a partnership materialized and by January (2019), a contract made it official. The Kreiders and Stauffers would join forces.

Nikki made an instantaneous impact thanks to her welcome sign that showcased a vintage Ford truck. For spring, it features a turquoise truck whose bed is filled with flowers. “It went viral,” Kristi reports, noting that the sign generated an initial order for 400. Nikki went to work, and the sign evolved into a summer theme with an American flag. This fall, the sign will take on an autumnal hue, and the truck will be filled with pumpkins. For the holidays, a Christmas tree will fill the bed of the truck.

The two portray their partnership as a “learning process,” with Kristi pointing out that “it’s like working with the equivalent of a spouse” because of the time they spend with each other. The fact that two couples are involved only adds to the mix of personalities. Add five kids between them, and life gets hectic. 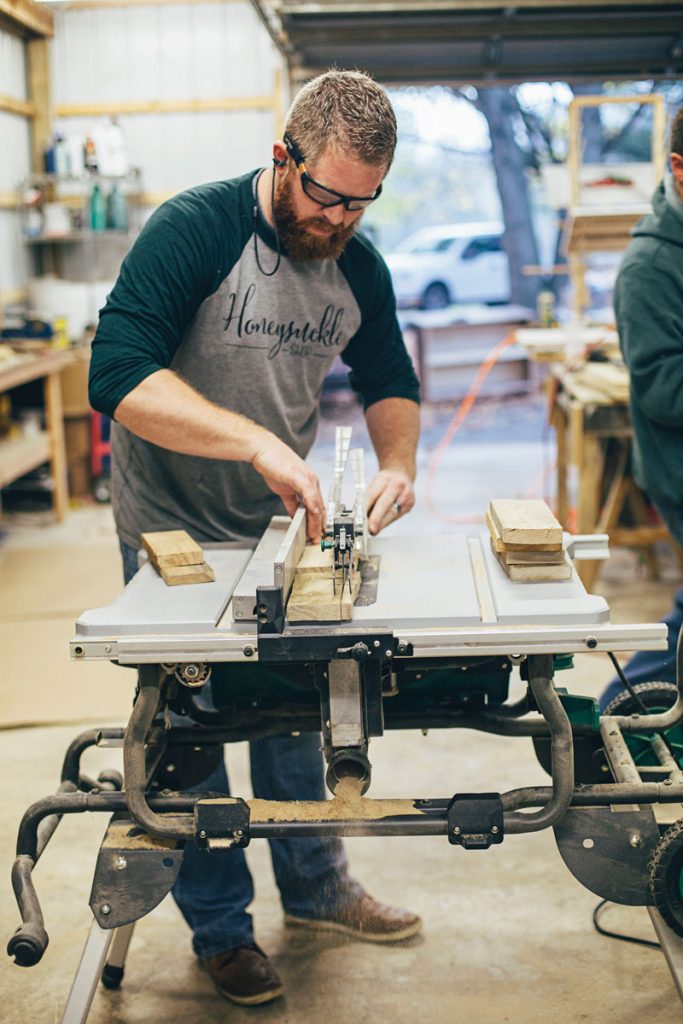 Jake at work in the woodshop.

Kristi and Nikki credit supportive grandparents, sharing household chores with their husbands and scheduling date nights for bringing sanity to their busy lives.

Thanks to the partnership, Honeysuckle Shop has been able to expand. “We’re learning how to be better – in everything we do,” Kristi notes. The two make it a practice to listen to motivational podcasts. They have increased the amount of custom work they accept. They’ve developed a unique wedding keepsake that has proven to be popular. They’ve also begun to dabble in retail. In Lancaster, Honeysuckle Shop products can be purchased at Gather Home Boutique in Conestoga. As for online orders, outside of Lancaster County, their biggest customer base is found in California.

They’ve also begun working with other makers, whose jewelry, home accessories, self-care items, greeting cards and more can be ordered through Honeysuckle’s website. 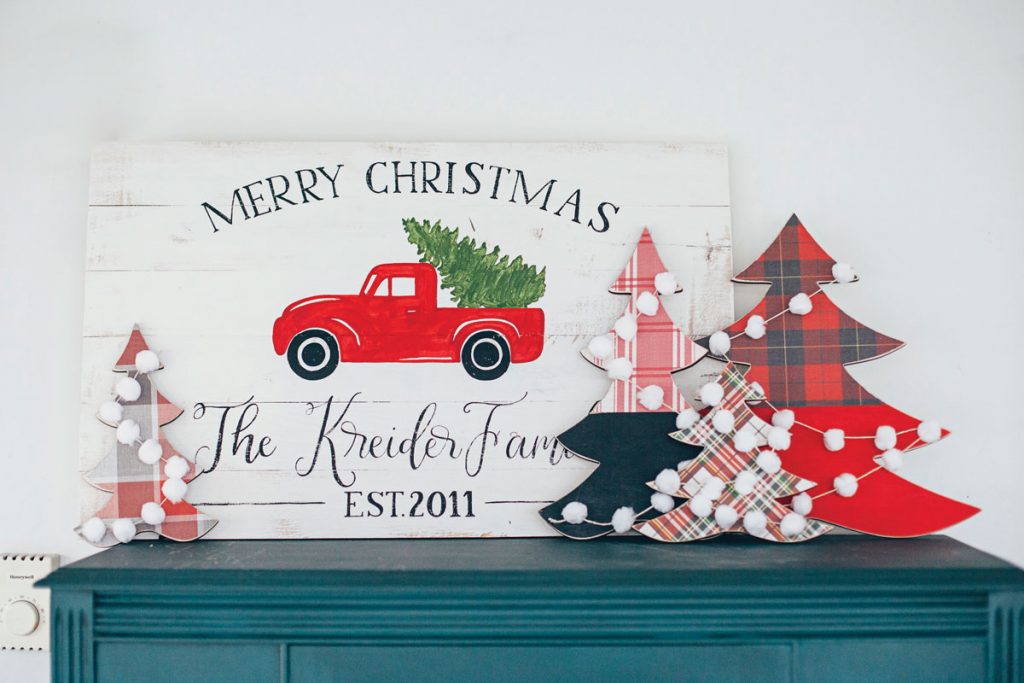 The vintage Ford truck has become a signature motif of Honeysuckle Shop.

Their biggest endeavor is the pop-up events Honeysuckle hosts. “We’ve done several here,” Kristi explains. “We were shocked at how many people came.” The overwhelming response made them realize the Kreiders’ property could not accommodate the pop-ups, and they began searching for a new location. Last spring, they hosted a pop-up at the Hertzog Homestead in Ephrata that included 22 vendors, food trucks and music. “Six-hundred people showed up,” says Nikki. Success prompted them to partner with Kristen and Scott Hertzog to hold pop-up events at the farm on a quarterly basis. “Each one will be different,” Kristi says. The next one will be held October 4-5. 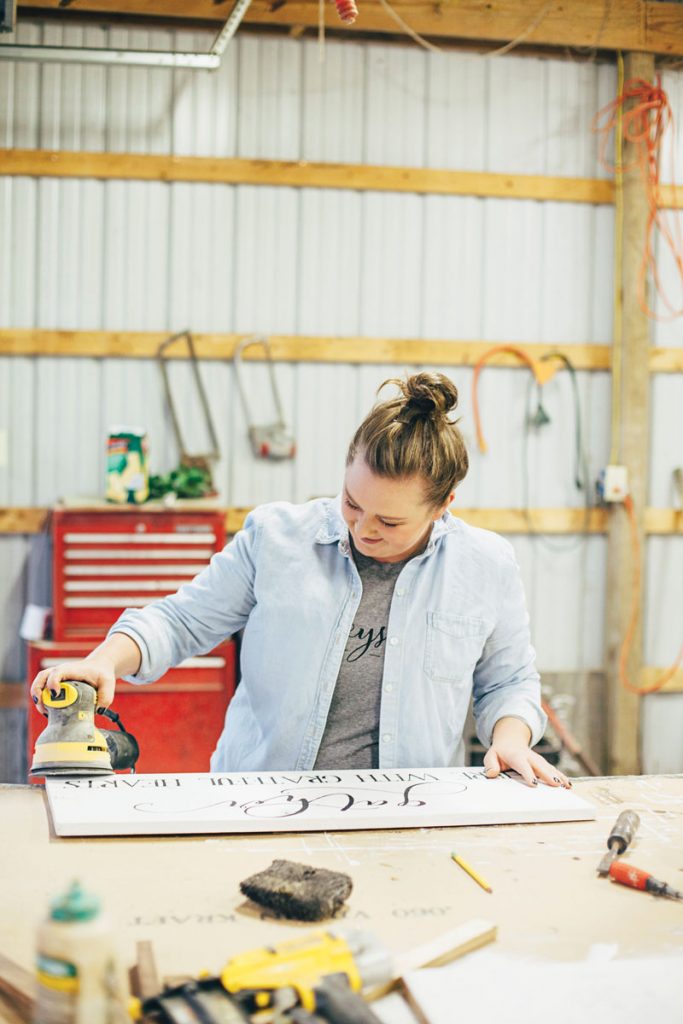 The future is also shaping up nicely. Honeysuckle will continue to host workshops and private parties. It will also continue participating in local makers markets such as those hosted by Creatively Lancaster. Honeysuckle will also be operating a 400-square-foot space at the Prussian Street Arcade in Manheim. Located at 49 West Main Street, the 10,000-square-foot space will be able to accommodate up to 100 vendors, makers, designers, etc. It is slated to open this fall.

Nikki and Kristi are also excited to be attending the RISE Business Conference in Charleston, South Carolina, in November. The conference, which is tailored to small business owners, is being presented by the Hollis Co., whose co-owner is Rachel Hollis, a motivational speaker, author (Girl, Stop Apologizing), blogger and influencer. 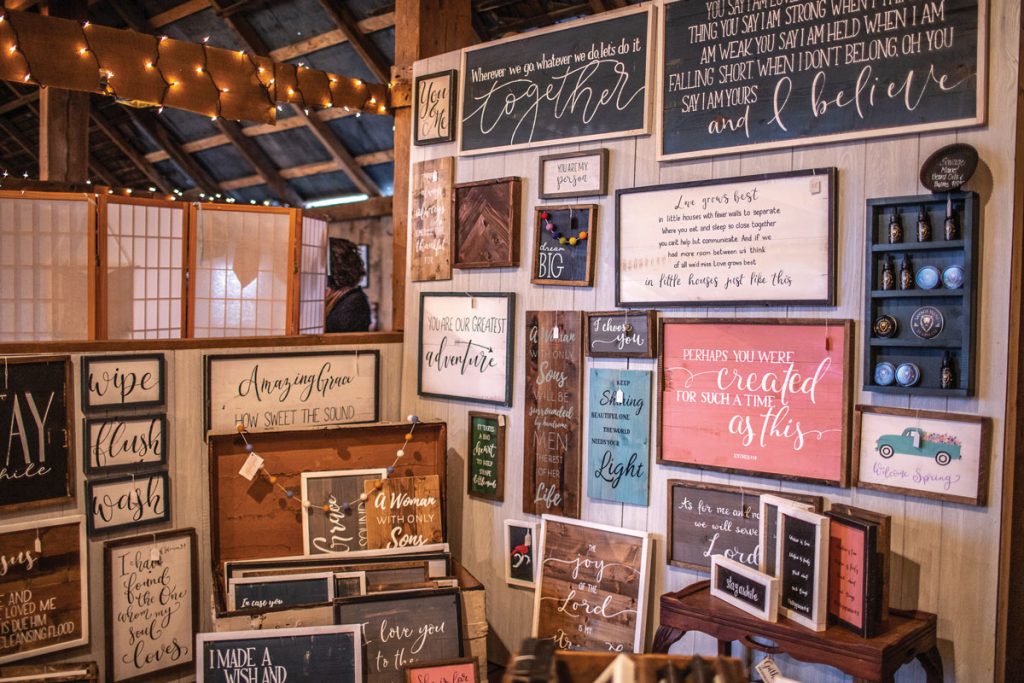 Honeysuckle Shop’s display at the spring pop-up event held at the Hertzog Homestead in Ephrata. The fall event will be held October 4-5. Photo by Brett Kreider.

Of course, visiting Waco is on their radar, as is Laurel, Mississippi (population 20,000), which is home to the Laurel Mercantile Co., a store that specializes in “heirloom wares and durable goods.” It’s owned by Erin and Ben Napier (and two other couples), whose HGTV show, Home Town, showcases their home-restoration projects. Like Waco, Laurel’s downtown has become rejuvenated thanks to Laurel Mercantile, whose success has prompted artists, makers, brewers and restaurateurs to take over properties that were candidates for adaptive reuse. Hmm … could Manheim be the next such town? 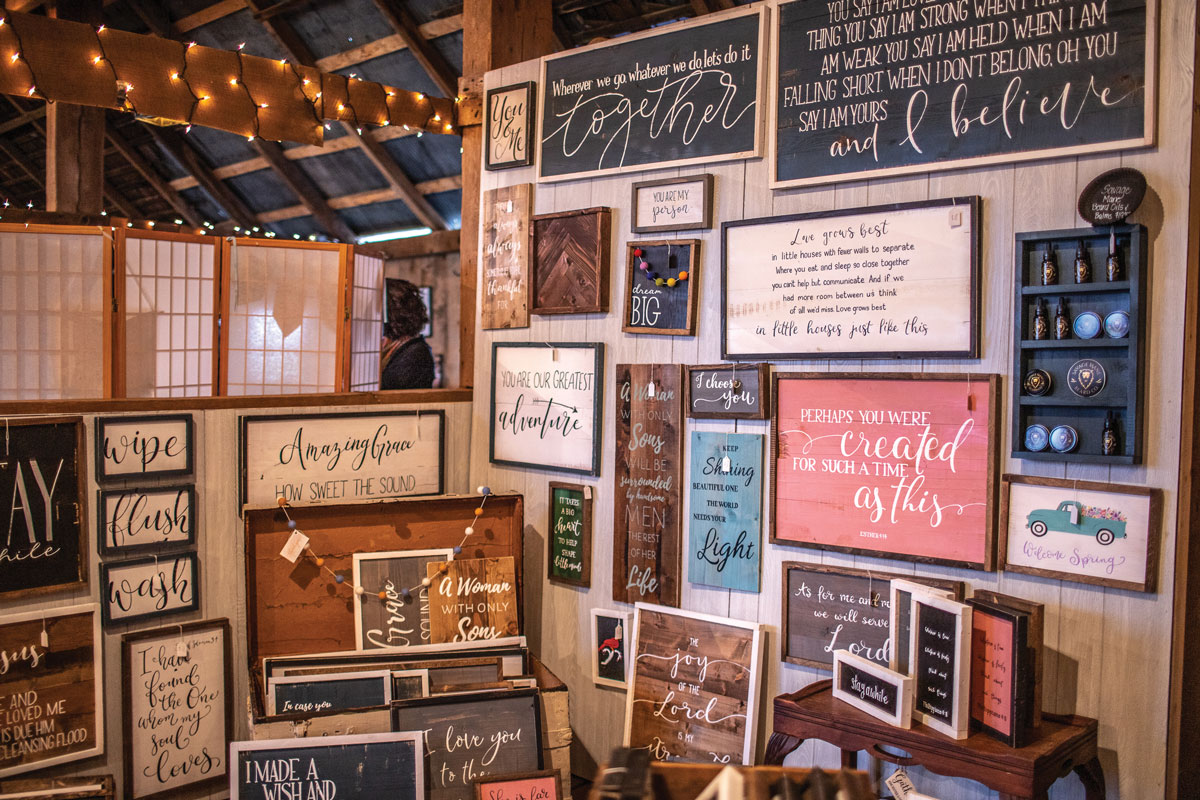 Honeysuckle Shop’s display at the spring pop-up event held at the Hertzog Homestead in Ephrata. The fall event will be held October 4-5. Photo by Brett Kreider.