Kynynmont Farm in Conestoga is helping to put Lancaster County on the equine map, as it is one of the leading dressage breeding farms in North America. For owners Pam and Kirk Liddell, their farm represents a love for horses, the country lifestyle, historic preservation and family.

Pam, who grew up in New York State, spent her childhood atop a horse. College, career and children curtailed that passion. Actually, detoured might be a better choice of words. While attending business school at the University of Chicago, she met Kirk, who was there as a joint JD/MBA candidate. Pam then transferred to the university’s law school and upon graduation, both joined law firms in Washington, D.C. Marriage and an opportunity for Kirk to join his father at what is now IREX Corporation prompted them to move to Lancaster in 1980.

Eleven years later, their family had grown to include four children. Their two daughters, who were 10 and 8 at the time, had taken a year of riding lessons and began begging their parents for a horse. That prompted a search for a farm property. 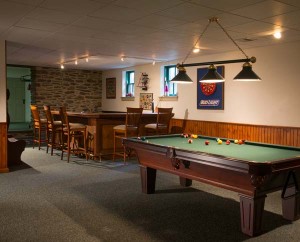 The basement of the wing built in 1999 is connected to the old basement through an opening in the original stone foundation. It’s used as a media and game room.

A horse-loving friend told them about a Conestoga Township property that would be coming on the market. The farm had been owned by generations of the Warfel family, but the death of its most recent owner, Clarence Warfel, ended the family’s tenure on the farm. “The Warfel family loved the farm,” Kirk notes. “But parts of the property had gone downhill after Clarence’s retirement. With all his children settled elsewhere, the family decided to sell the farm. We happened to be in the market at just the right time.”

While the house, which dates to 1889, and numerous outbuildings were not in the best of shape, their potential appealed to the couple. The beautiful vistas of a tranquil farm pond, rolling hills and surrounding woodland sealed the deal. Architects Gary Weaver and Wendy Tippetts, along with general contractor Don Gallagher, collaborated with the Liddells in a major renovation of the house that created a modern-day home that retains the architectural flavor of the original Victorian farmhouse.

A decade later, the couple partnered with Wendy and general contractor Clayton Gerlach to enlarge the house with an addition, plus to build a pool complex that overlooks ponds, pastures, woods and meadows.

The farm provided pam with the opportunity to reconnect with horses and follow a new career path. “Once we had the land, it made sense to do something with it. Breeding horses was the answer,” she explains. “I remembered from childhood a girl with a beautiful Connemara that was the envy of all of us at the barn. That’s where the idea to breed Connemaras came from.” 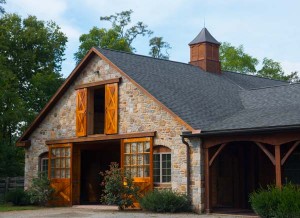 The horse barn was built by New Holland-based King Construction in 2007.

The Connemara is Ireland’s native horse. The country’s love of horses dates back to the ancient Celts, who were skilled horsemen.  The Connemara hails from County Galway on the wild, western coast of Ireland. Most believe the Connemara resulted from native stock breeding with the Andalusians that survived the shipwrecks of the Spanish Armada in 1588 and managed to swim ashore. The resulting horses learned to not only survive but also thrive in the harsh environment.

Recognizing the horses’ hardiness, farmers began to capture and tame them. They proved to be tantamount to a family’s survival, as they became true workhorses that possessed the ability to pull plows and carts (filled with everything from seaweed and bog turf to rocks) from dawn to dusk, and transport the family to Mass each Sunday, as well.

Arabian blood was introduced in the 18th century, thus providing the sturdy little horses with strength and stamina. Through the centuries the horse was also crossbred with hackneys and thoroughbreds. 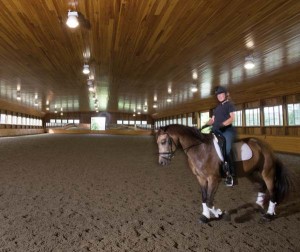 The barn includes a large arena; here Pam and Grady practice for dressage.

The barn includes a large arena; here Pam and Grady practice for dressage.

By the late 19th century, Irish horse lovers began to realize the crossbreeding was diluting the bloodlines, and the country was on the verge of “losing a piece of its soul.” In an effort to preserve the breed, the Connemara Pony Breeders Society set forth to select the best males and females from “native stock” to serve as the foundation for a breeding program that aimed to retain and enhance the Connemara’s best qualities: a genial disposition and a powerful, athletic build. The society also aimed to hold an annual festival, the first of which was held in 1924. The tradition continues: This year’s Festival of the Connemara will be held in Clifden, County Galway, August 16-23. The festival is regarded as the world’s largest show dedicated to the Connemara.

Pam traveled to Ireland in search of a stallion. “Everywhere I went, the same thing happened. People invited me into their homes for tea, and in most I would see a picture of President Kennedy hanging on the wall, showing their pride that an Irishman had become President of the United States. Afterwards they’d roll out these magnificent horses.”

after a 36-year hiatus from riding, Pam got back in the saddle in 2007. “I had held off for so long because with four kids and 20 horses to take care of, I could not afford to risk falling off a horse and breaking something,” she explains. That same year, the Liddells started building the horse barn and arena, this time collaborating with Wendy and New Holland-based King Construction, whose niche equine specialty takes the company all over the mid-Atlantic region. 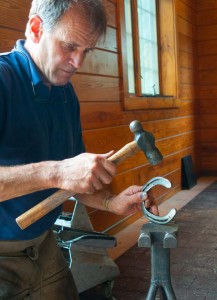 Farriers visit the farm on a weekly basis, as show horses need to be shod every four to six weeks, while the field horses need to have their hooves trimmed on a regular basis. Steve Teichman of Chester County Farrier Associates is a highly regarded farrier who specializes in creating custom shoes. He accompanied the United States Equestrian Team to Sydney for the 2000 Olympics.

Interestingly, Pam notes that 85% of the inquiries about her horses come from middle-aged women who are looking for safe, dependable horses with nice personalities. The statistic reflects those of the American Horse Council Federation for horses of all breeds. The Equine Megamarket Study takes it a step further: Its findings report that the average horse owner is a woman, age 35-54, with teenage children and various other pets. Most own horse-friendly properties and spend an average of 22 hours per week with their horses.

Pam also breeds Connemaras for competition, specifically dressage, as well as eventing, which includes dressage, stadium jumping and cross country. While Connemaras have long been known for their jumping ability, Pam’s Connemaras have proven to be winners in dressage. “It’s been a challenge,” she notes. “Smaller horses haven’t historically scored as well as the larger horses, but the competitive successes of Kynynmont Connemaras are changing that.” She also engages in crossbreeding, which essentially produces custom horses such as the Irish Sport Horse that is a cross between a Connemara and a warmblood or a thoroughbred.

Pam’s dedication has enabled Kynynmont Farm to become one of the top dressage breeding farms in the country. In 2012 and 2013 Pam was ranked eighth out of a total of 1,500 U.S. dressage breeders by the United States Equestrian Federation (USEF); rankings are based on points scored in the show ring. Last year Kynynmont Gunsmoke’s Gideon was 4th Level Reserve Champion at the USEF Regional Finals, and he was named Half-bred Connemara of the Year by the American Connemara Pony Society (ACPS). Another of Pam’s horses was awarded the USEF’s trophy for the highest placed purebred or half-bred ridden by a junior rider. Kynynmont horses have also taken home at least three and sometimes all four of the USEF Purebred and Half-bred Connemara Champion and Reserve Champion honors in each of the last four years.

Pam says breeding horses has proven to be a perfect career choice now that her children are grown. “I’m very competitive and goal-oriented,” she remarks. “I thrive with a goal in front of me all the time. Plus, riding and competing in dressage is fabulous exercise for both the body and brain. It keeps you fit and sharp. I love to work with these stunningly beautiful animals, and breeding them is a fascinating art and science. I also love meeting the world of people who have a passion for horses.” The hardest part of the job is naming her horses. “I have a hard time with that,” she admits.

As for Kirk, he enjoys being the farm’s caretaker. “I’m one of those people who always needs a project, so living on a farm suits me. I also like being outdoors.” On occasion he will ride one of his two Quarter Horses around the 115-acre farm that’s not only home to horses but also to deer, turkey, fox and countless birds. He often extends his rides on the Low Grade trail that’s adjacent to the property and skirts the Susquehanna.

And the Liddells’ three grandchildren (a fourth is on the way) also love the farm, especially the horses. “When they’re atop a horse, they grin from ear to ear,” Pam relates.

According to the American Horse Council Federation, the United States is home to more than 2 million horse owners.Texas has the most horses, with nearly 980,000. California is next with almost 700,000.

Virginia hosts more than 700 equine events per year, including the famous Pony Swim that takes place between Assateague and Chincoteague islands in late July and serves as a fundraiser for the Chincoteague Fire Company.

In Maryland, the economic impact of horse breeding and racing – a 250-year tradition – is triple that of all other sports combined. Horse farms occupy 200,000 acres across Maryland.

Kentucky hosts the most famous horse race in the world, the Kentucky Derby. Lexington is home to the Kentucky Horse Park, a working farm/educational theme park that is the only one of its kind in the world.

North Carolina’s barrier islands are home to free-roaming horses that are the descendants of shipwreck survivors. Nags Head is named for the tradition of pirates walking horses (with lanterns hanging from their necks) on the beaches in hopes of enticing ships into the shallow waters and robbing them.

Montana is home to the Pryor Mountain Wild Horse Refuge, which covers 31,000 acres. Many of its residents can trace their lineage back to the Spanish Conquistadors.

Pennsylvania is home to approximately 220,000 horses. Lancaster is the headquarters of the monthly (and award-winning) publication Pennsylvania Equestrian, which was founded by Stephanie Shertzer Lawson in 1993 as a way to publicize a Horse Farms Open House event being held in Lancaster County. Now, the publication attracts as many as 70,000 readers per issue and engages in social media. 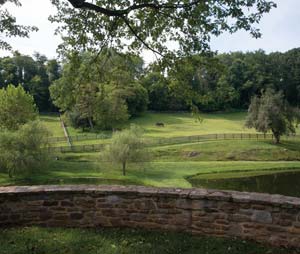