Sometimes, you just gotta have a hot dog! Especially on the Fourth of July. After all, they’re as American as baseball or Don McLean and his “American Pie.” To quote my friend, Jamie Weaver, “I swear, a baby bald eagle is born every time a hot dog is roasted.” 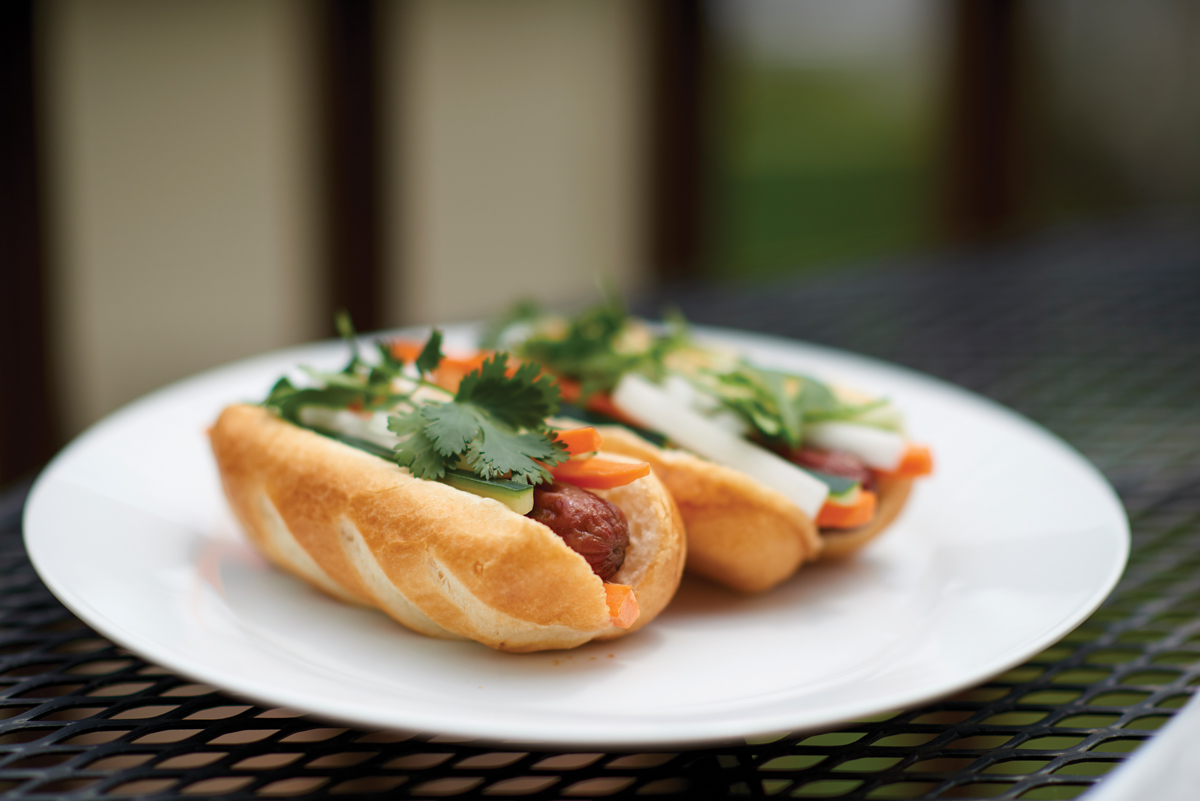 Folks often assume that being a foodie, hot dogs are probably not my thing. Frankly (no pun intended), that couldn’t be further from the truth. I’ll eat a hot dog or two on occasion as long as the quality is there. The general notion that any sort of food is unsuitable for any given level of culture is, to me, egregious. Food unites us across cultures, and by no means should be a tool to separate. Sure, you wouldn’t bring foie gras to a vegan pot luck dinner, but pretense ignores a key, fundamental question: Is the food good?

According to Phillybite.com, the average American consumes 70 hot dogs per year. I know, you’re probably questioning that stat. But, think about it – hot dogs are a staple for cookouts, camping trips, beach bonfires, fairs, picnics and sporting events. I mean, who goes to a baseball game and doesn’t indulge in an obscenely expensive hot dog? 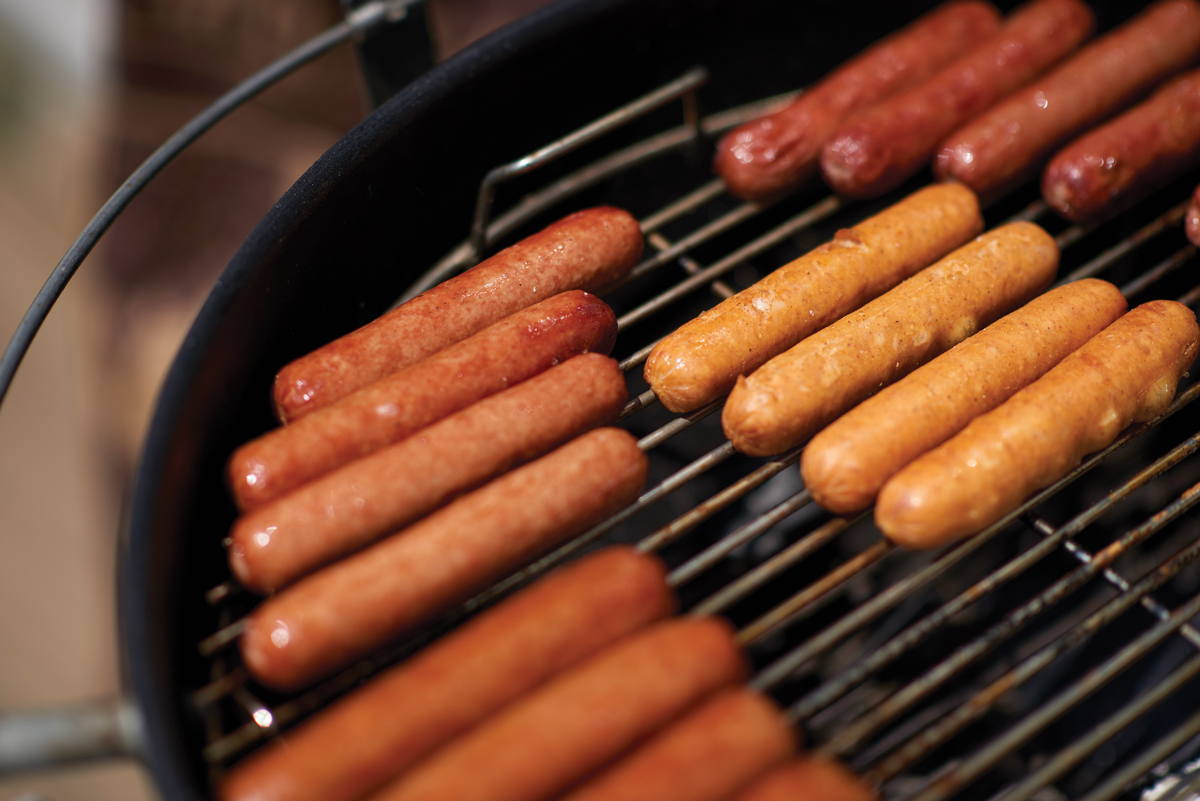 An assortment of hot dogs cooking over lump charcoal on a Weber grill.

Hot dogs also probably qualify as America’s first fast food. How many harried moms haven’t thrown hot dogs in the oven and called it dinner? For some reason, children who are otherwise finicky eaters will devour a hot dog.

For those who dismiss hot dogs as being alien to healthy living, have you checked out the selection at your favorite grocery store lately? Hot dogs are now made from grass-fed cows. There are hot dogs made of chicken and turkey. There are low-sodium hot dogs. There are probably gluten-free hot dogs.

In my food calendar, hot dog season kicks off in early spring with a trip to Boehringer’s Drive-In in Adamstown. Without fail, when Boehringer’s reopens each spring, I’m chomping at the bit to enjoy a meal outside. Sitting by the stream on a picnic bench with a hot dog is as simple, but yet gratifying, as it gets. Boehringer’s also evokes memories. I remember going there as a kid with my grandparents after visiting Shupp’s Grove early on Saturdays. 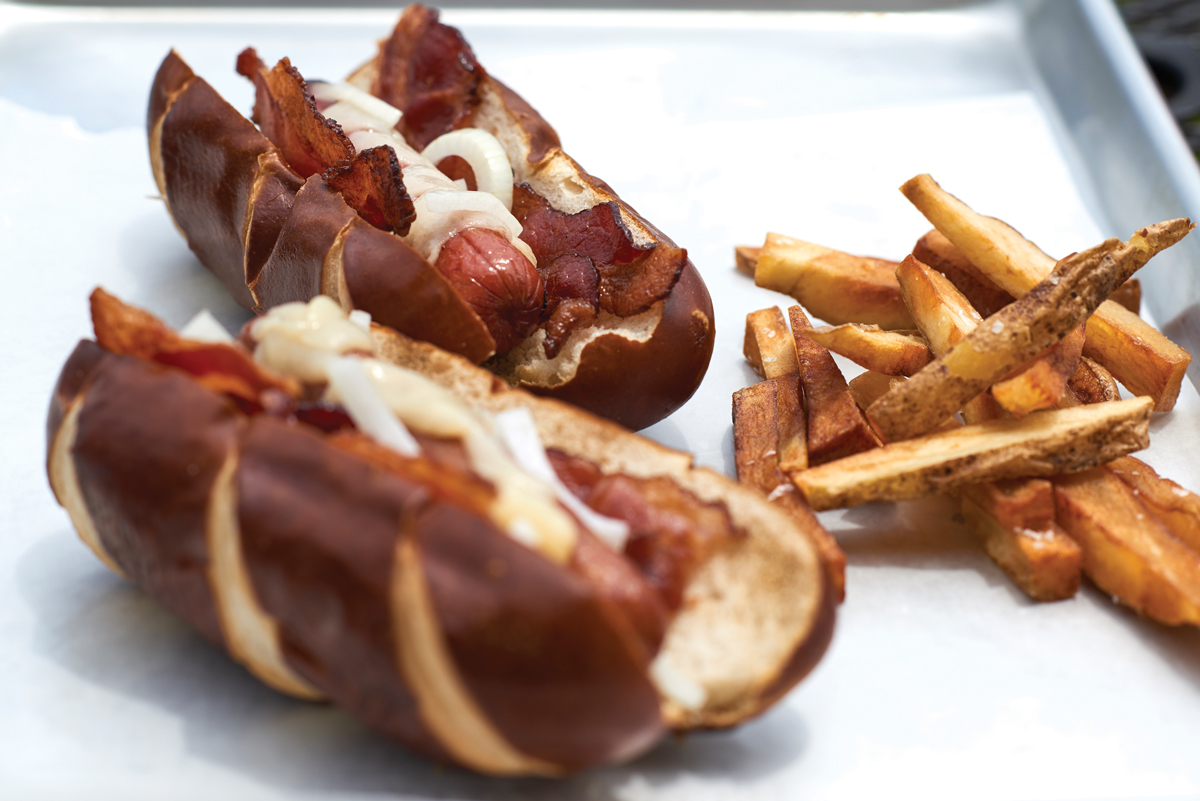 Judging by the deep lines at Boehringer’s, the road-side stand tradition is alive and well. Just make sure you save room for ice cream.

Simple foods aren’t necessarily boring. I had my first Chicago dog in the city for which it is named. I remember it like it was yesterday. It was a brisk, windy night and after a long day of travel and photography, for some reason I was craving a hot dog. A quick Google search revealed that a restaurant called The Weiner’s Circle was only a few blocks away. I walked in and was immediately berated for what felt like eternity on all manner of subjects that I’ll refrain from mentioning here. I was cluelessly at the mercy of the staff until the next customer came in, thereby saving me from further shame, relinquishing me to join the previously seated guests enjoying the dinner show. 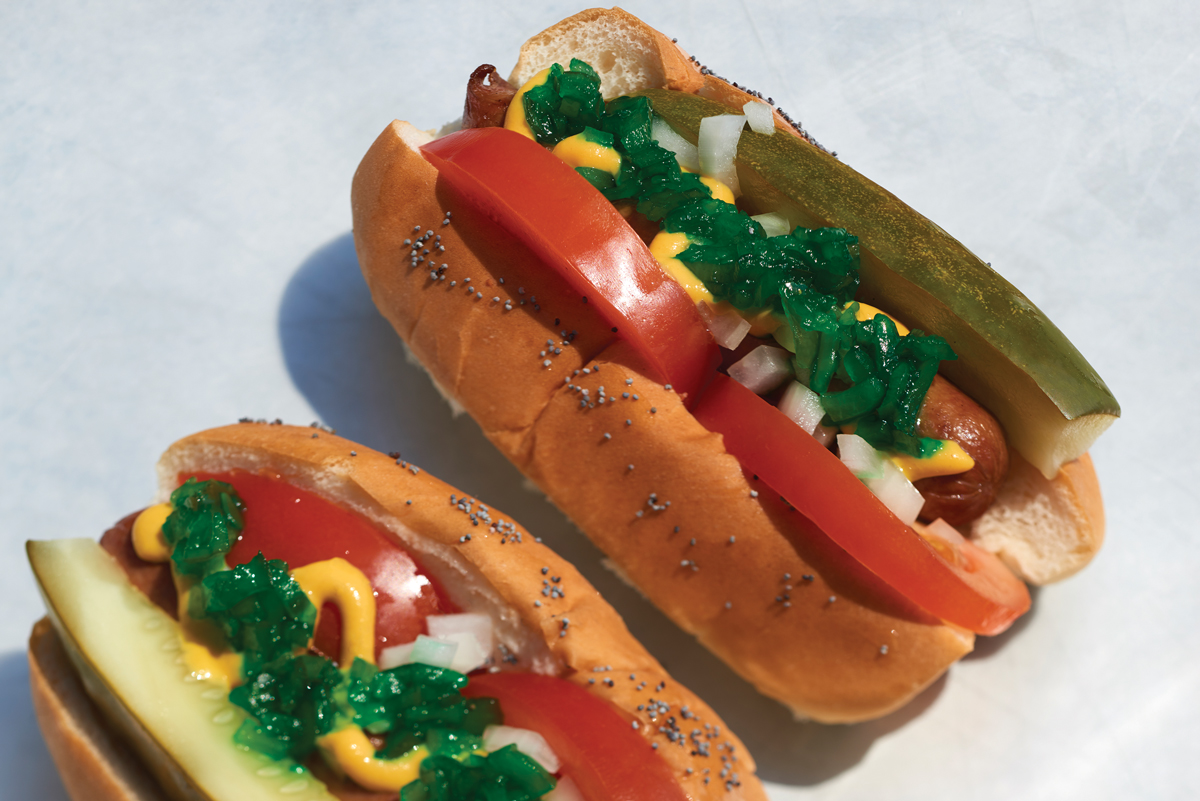 It wasn’t until I was watching Conan O’Brien’s late-night comedy show years later that I discovered what had transpired when I walked through the doors. The Weiner’s Circle is famous for being, shall we say, comedically critical of its patrons. Looking back, I’ll have to admit it was hilarious.

As for the makeup of a Chicago dog, it’s quite simple. An all-beef frank is accompanied by a crunchy dill pickle spear, sliced tomato, onion, yellow mustard, neon-green relish, peppers, celery salt and served on a poppyseed bun. It offers tons of flavor, and the juicy vegetables provide a satisfying crunch. Its doctrine could swiftly be pushed to take on a Cubano spin with zesty mustard, buttered pickles and Swiss cheese.

I turned to soups and sandwiches as inspiration for upgrading my hot dog experience. Caramelized onions are paired with melted, imported Swiss gruyère cheese and placed atop a toasted French brioche roll to create a French onion-inspired hot dog. 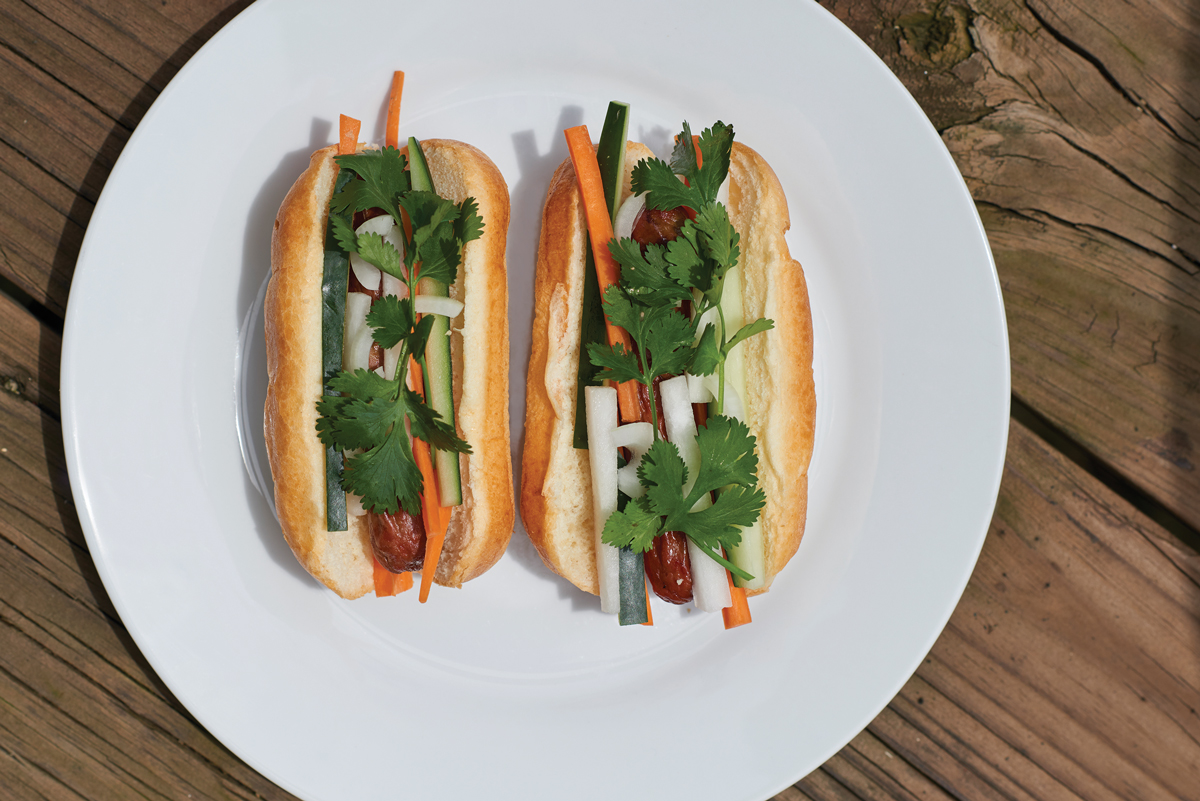 Add your choice of mayonnaise, sriracha or peanut sauce for a Thai-influenced hot dog. Of the lot, the Reuben-inspired hot dog was perhaps my favorite spin: aged Swiss cheese, corned beef, sauerkraut and Russian dressing. Swapping in coleslaw for the sauerkraut would turn it into a Rachel-inspired hot dog. 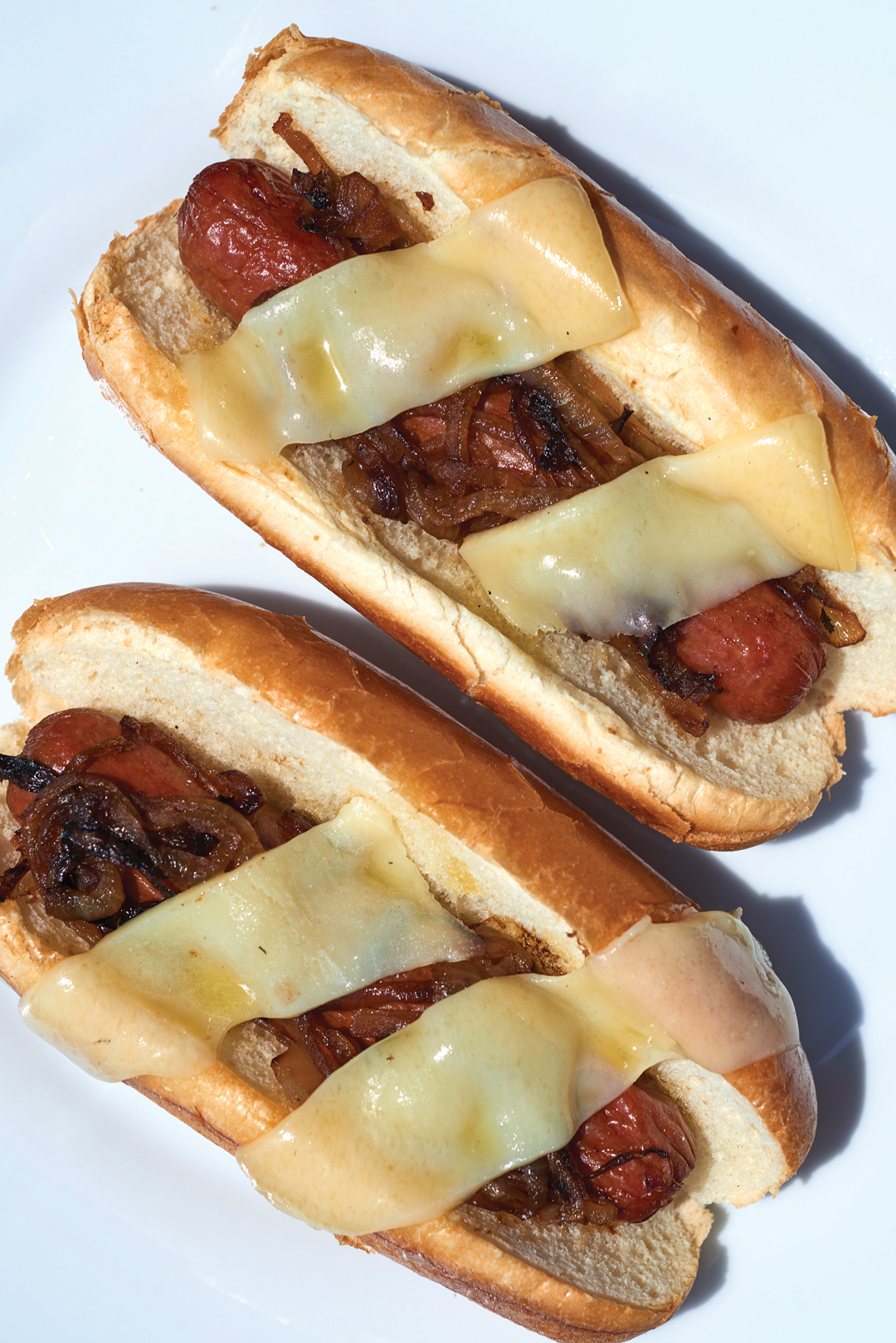 For this month’s column, I taste-tested five varieties of hot dogs: beef to chicken, local to national. My favorite hot dogs are Hebrew National Beef Franks. The snap of each bite is perfect, and the flavor is quintessential, beefy, a balanced sweet and salty flavor. Kunzler Beef Franks took second and are my favorite local option. Wegman’s Organic Uncured Chicken Hot Dogs are quite flavorful but, without the fat content of beef franks, they tend to stick to the grill, requiring a delay for the meat to sear and release from the grates. 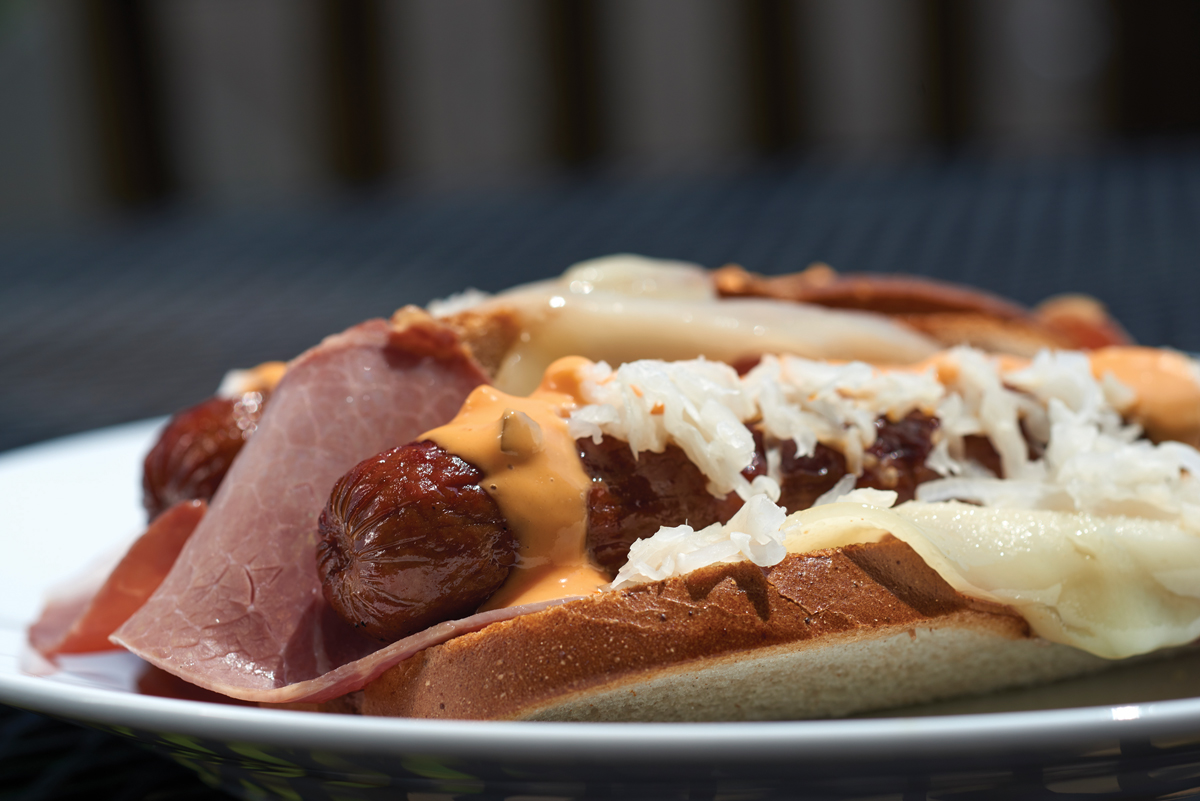 You can use just about any method to cook a hot dog – boiling, broiling, frying, roasting and grilling, which is the manner 60% of Americans prefer according to the National Hot Dog and Sausage Council.

Cooking franks and toppings on a charcoal grill simply adds another dimension of flavor. Just make sure the grill is properly heated. Add a few slits to the dogs, but don’t slice them down the middle, which causes them to dry out. Cook them for no longer than six minutes and use tongs to rotate them so that they get the even char you’re after. Yes, you can use mesquite or other flavorful wood/charcoal. 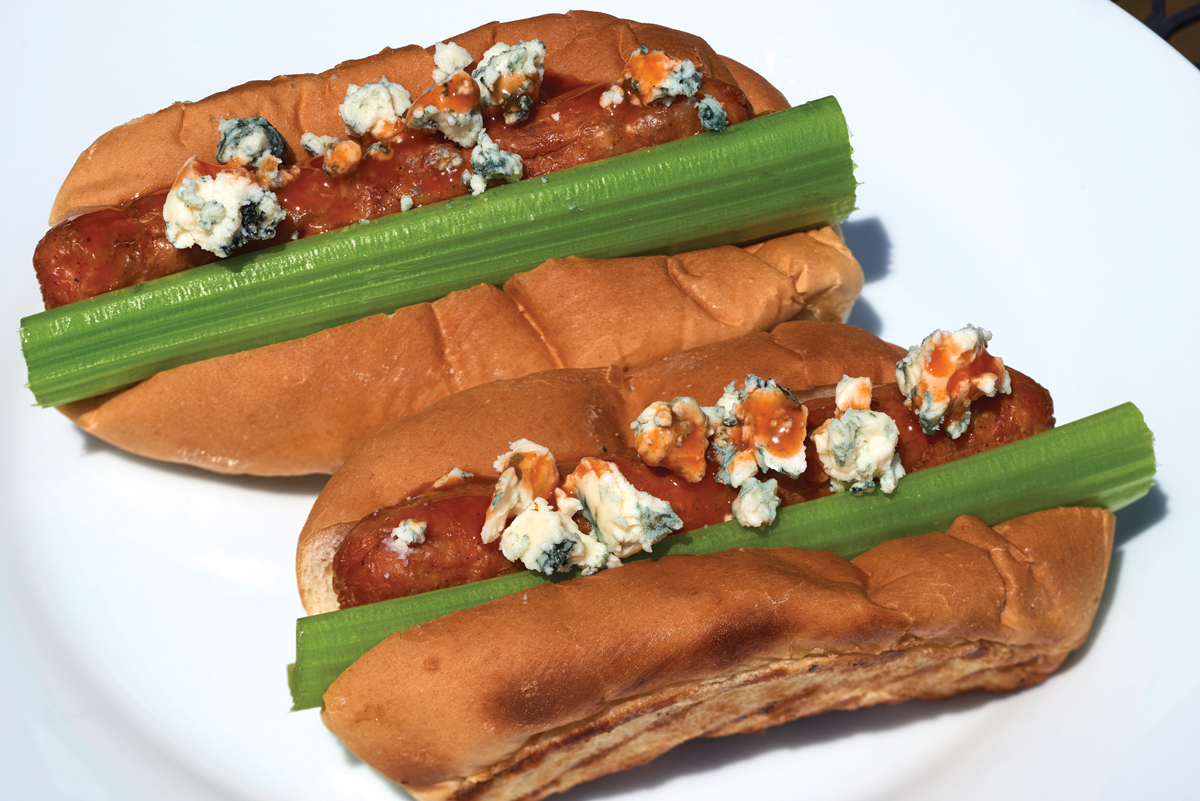 You can also lay bread or bacon right on the grill or heat a cast iron griddle to toast them without fear of losing any accouterments to the ashes below. If any franks curiously remain, dice up your leftovers for breakfast the next morning with bacon, cheddar, eggs over easy, fried potatoes and hot sauce.

As for the toppings, the sky’s the limit. You could even create a toppings bar for your next barbeque. However, Brian Averna, who served as executive chef for the Sara Lee Corporation for 13 years, stresses that you need to “dress the dog and not the bun.” He suggests that you start with wet ingredients (mustard, chili, ketchup), then move to chunky ingredients (onions, peppers, relish), then add shredded ingredients (cheese) and finally add the finishing touch of spices.