Back in January, people were rushing the doors at the grocery chain Aldi. Social media was atwitter! The frenzy had nothing to do with food. The highly coveted fiddle-leaf fig – the plant of the decade according to The New York Times – was on sale for the amazing price of $13! 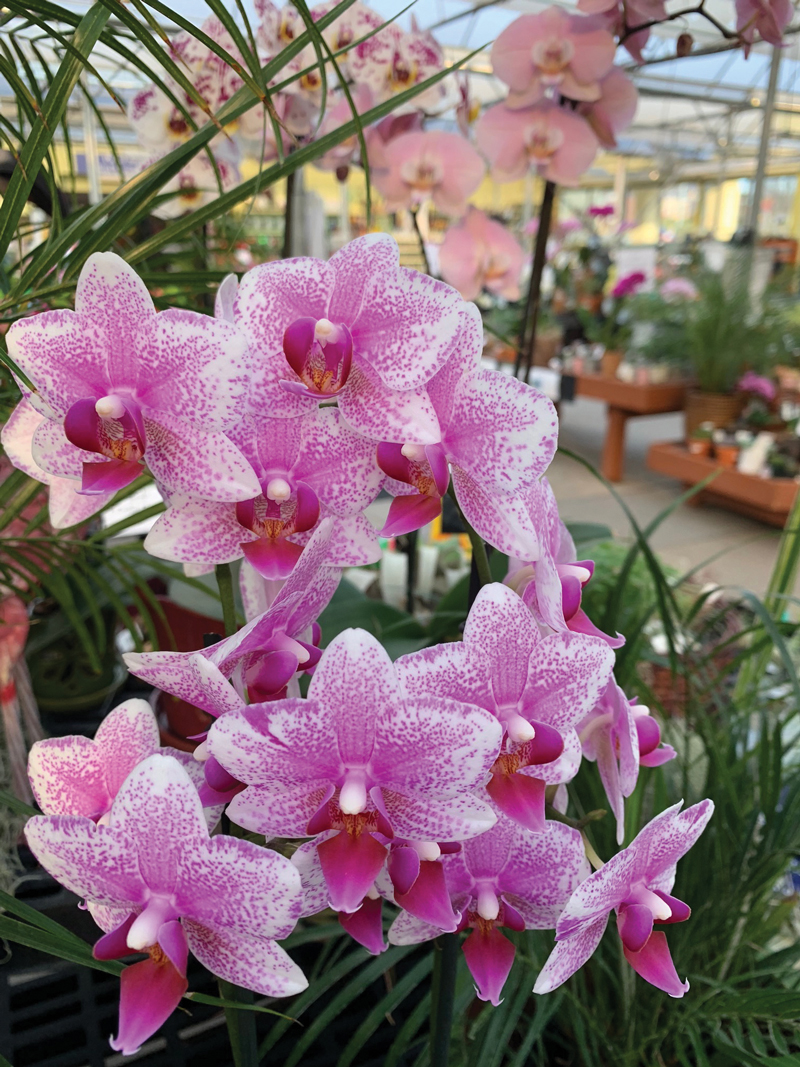 Orchids are a plant enthusiast’s dream as they offer incredible color and wonderful scents. (Note: the plants seen on this page were photographed at Stauffers’ Rohrerstown greenhouse.)

It seems houseplants are the must-have accessory for today’s homes. If you’ll recall, in the January issue, we explained that dog-friendly weddings are all the rage thanks to millennials who want their dogs to be a part of their big day. But, according to the Kennett Square-based Garden Media Group, which issues a Garden Trends Report (GTR) each year, before they adopt pets, the millennials test the waters by becoming plant parents.

I know, I know – the boomers are probably rolling their eyes and muttering, “Been there, done that.” After all, homes, offices, restaurants, malls and trendy California fern bars resembled jungles back in the 70s. Boomers could never have enough plants! Nearly 50 years later, they, too, have jumped back on the bandwagon and are plant happy. Who would have guessed the millenials and boomers would find common ground through houseplants? It plays perfectly into GTR’s theme for 2019, Rooted Together. 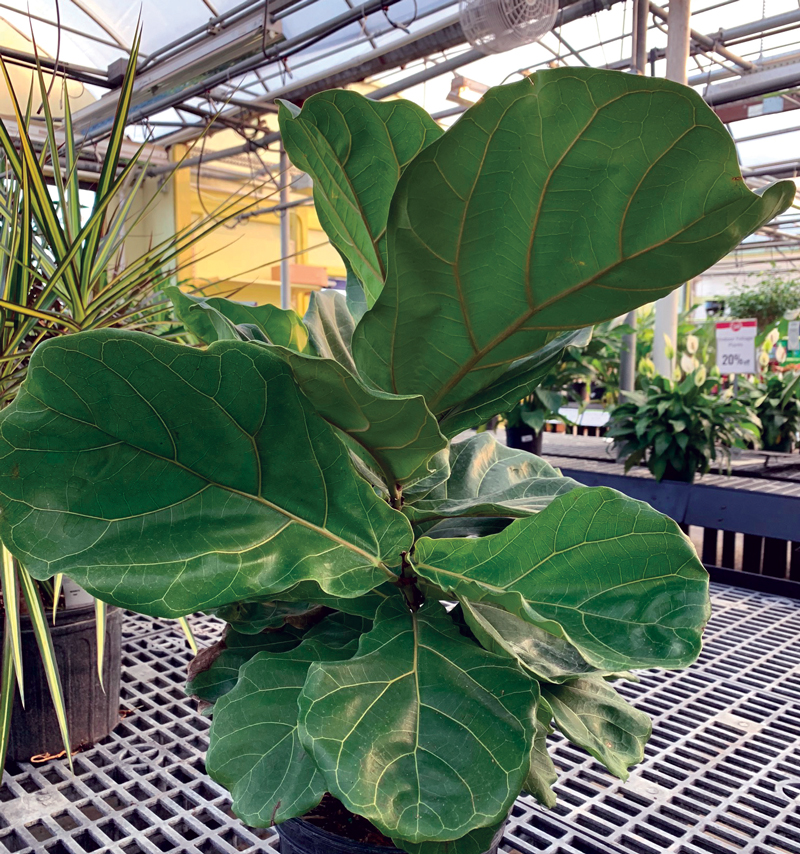 The Garden Media Group has made houseplants one of its top trends for 2019. They say their prediction is tailor-made for the “indoor generation,” pointing out that 90% of the world’s population spends 22 hours a day indoors. As for Americans, they spend 93% of their day inside their homes, offices and vehicles. Today’s children spend an average of less than an hour outdoors on any given day. Instead of enjoying sunshine, we bask in the glow of screens – televisions, computers, phones, etc. According to the GTR, it’s messing with our natural rhythms.

So, to remedy the situation, the Garden Media Group has declared that in 2019, “the indoors is the new outdoors.” Houseplants are doing battle with those glowing screens. But, how do you research plants without the help of those glowing screens? Consider Pinterest. Searches for indoor plants increased by 90% last year, with terrariums, cacti and tropicals registering the most looks. Have you seen the app through which you snap a photo of a plant and its identity is instantly revealed? It’s genius! 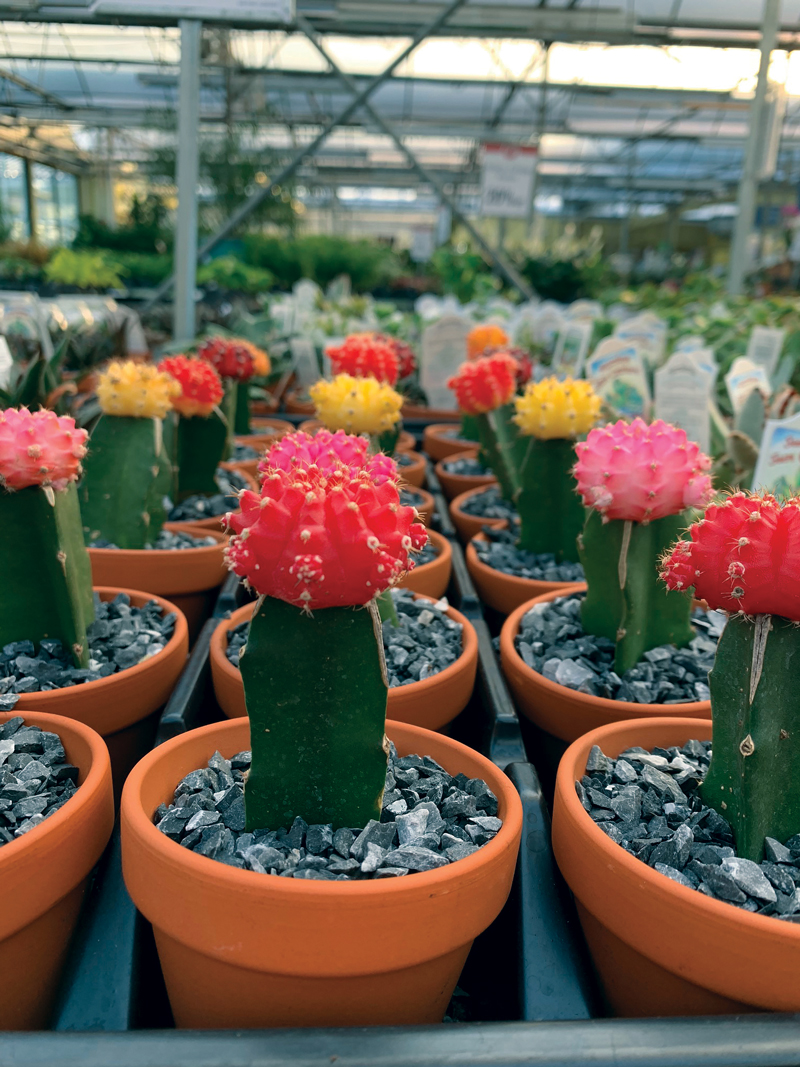 The sculptural grafted-cactus delivers a pop of color.

Houseplant mania is everywhere, which is probably why 30% of all the households in America purchased at least one houseplant last year (gardenresearch.com). As for the millennials, 31% of all plant sales are credited to them. Joanna Gaines touts plants as “a simple and inexpensive way to incorporate life and color into your house.” Apparently, she hasn’t priced a fiddle-leaf fig lately. Sue Ream, a landscape designer with Stauffers of Kissel Hill, confirms the popularity of houseplants. “People come in here with lists of the plants they want,” she says. 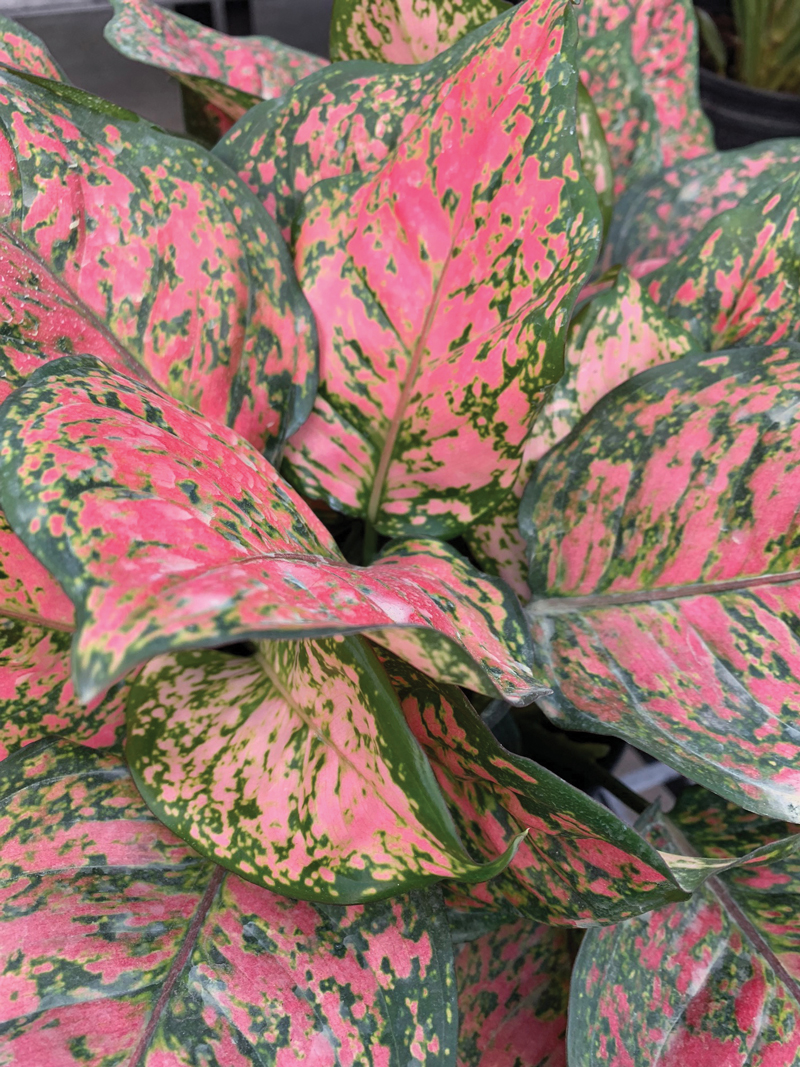 Aglaonema, which is also known as Chinese Evergreen, ranges in color from dark green to silver. It performs well in low-light areas.

To meet demand, garden centers, nurseries and flower shops have expanded their offerings. (Stepping inside a plant-filled garden center at this time of year is like a breath of fresh air.) You can buy houseplants at home, big-box and grocery stores. Television shopping channels and Internet sites are onboard.

I’m sure the vendor market at the Philadelphia Flower Show –
which is paying homage to the 50th anniversary of Woodstock with a Flower Power theme – will be overflowing with houseplants. 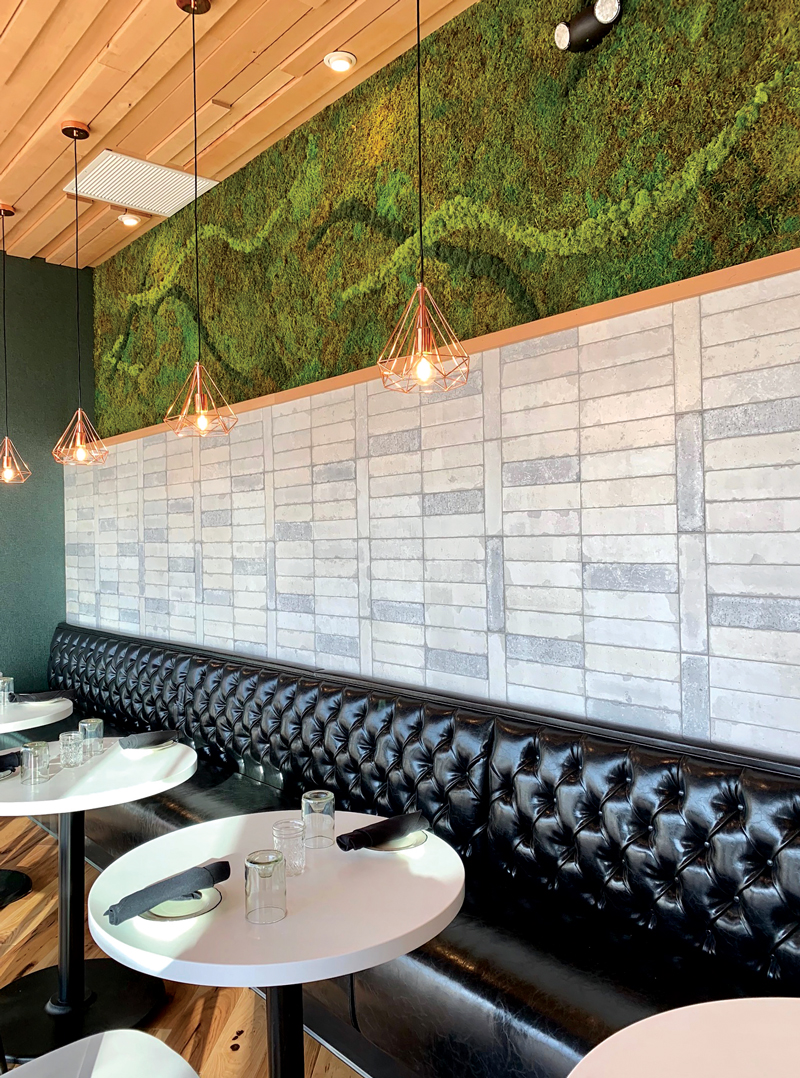 A moss wall at the restaurant Per Diem (Hotel Rock Lititz) not only provides a connection to nature, but it absorbs sound.

Flower shops and garden centers are offering classes and seminars, and a company called Terrarium Therapy is partnering with wineries to present terrarium workshops that sell out as soon as they are announced.

On the homefront, plant rooms and greenhouses are on the must-have list.
Plants, of course, are more than home accessories. They serve as biofilters in that they produce oxygen and remove mold spores, microbes and bacteria from the air. Their roots eliminate toxins by absorbing them and converting them into nutrients. More importantly, they provide a connection to the natural world. Costa Farms, whose products are found in grocery and home stores, recognized the value of houseplants and introduced its O2 for You collection in 2008. 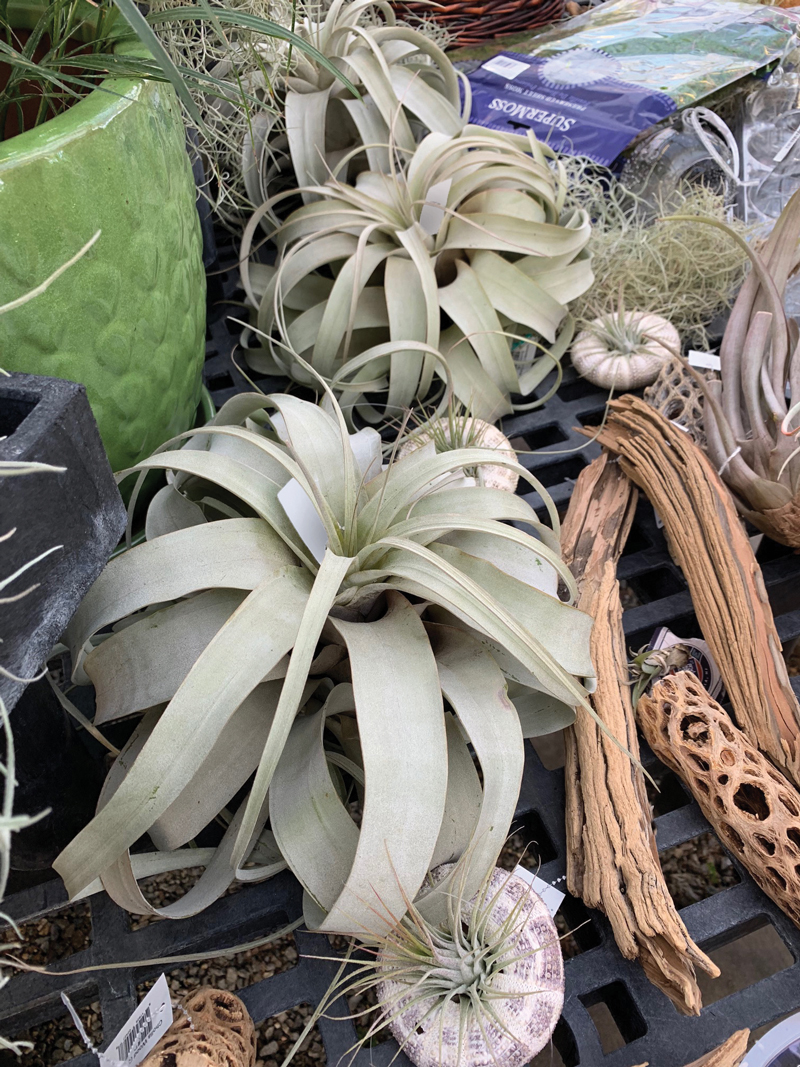 The almost-no-maintenance air plant pairs nicely with succulents and cacti.

Houseplants circa 2019 have expanded beyond the pot in a window. Plants are being used to create terrariums, living wreaths and wall art. Low-maintenance has entered the picture thanks to succulents, cacti and air plants.

Jim, who is a floral designer at Floral Designs of Mount Joy, loves plants of all kinds. His gorgeous gardens on the outskirts of Elizabethtown are renowned. He’s an avid forager and is always on the lookout for mushrooms and interesting mosses. Last year, he traveled to Florida in search of air plants and returned home with 300. 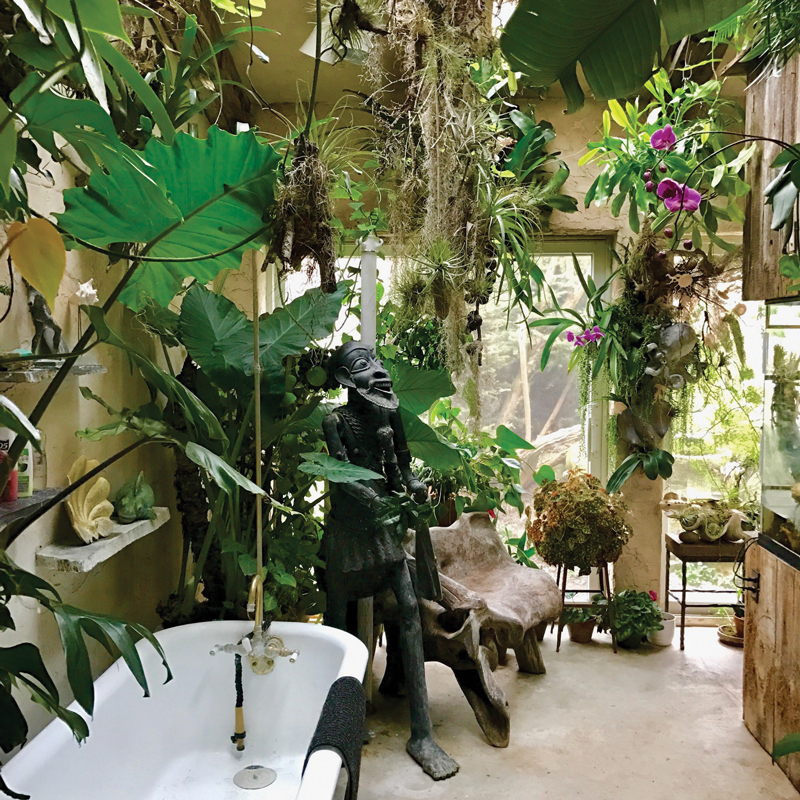 Jim Showers’ soaring, light-infused bathroom is filled with all sorts of tropical plants, including his latest favorite, air plants. The bathroom, which is an addition he designed for his 18th-century home, opens to the many gardens that define his property.

Jim’s fascination with plants continues inside his home. His interest in orchids has given way to low-maintenance specimens, notably air plants, which are classified as epiphytes, meaning they grow without dirt. Instead, air plants attach themselves to rocks, trees, shrubs or the ground with their roots. They fit nicely into those tear-shaped hanging glass containers that are all the rage. They are native to the southern United States, Mexico, Central America and South America. “They’re just kind of neat,” he says. “Their major culprit is that people try too hard and over-water them. The same goes with cactus and succulents.” In Jim’s estimation, they almost qualify as no-maintenance plants. 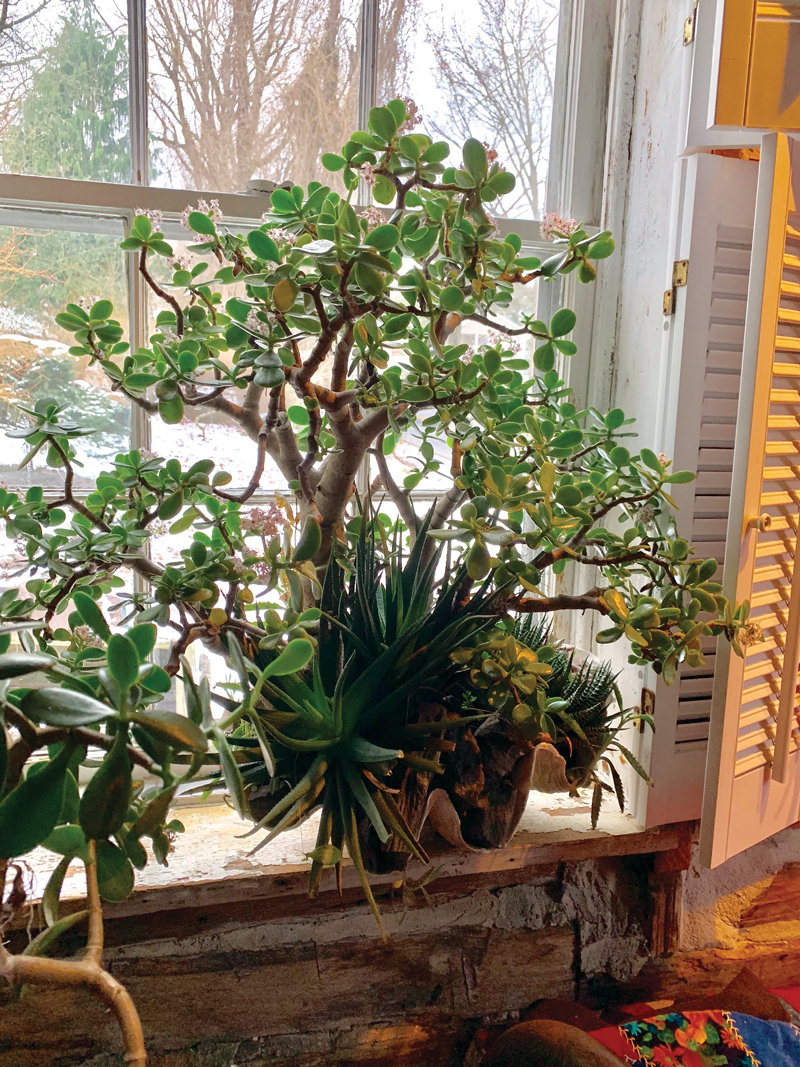 One of Jim’s jade plants, which he inherited from a relative, is probably at least 45 years old.

Jim inherited his love of plants and remembers his grandmother and aunts tending to theirs. Socializing on Sundays often centered on sharing plants, cuttings and advice. Jim recalls that plants were often handed down to the next generation in his family. He inherited one of his jade plants and guesses it’s at least 45 years old.

For Jim, plant mania is déjà vu. “There’s not a lot that’s new,” he says of plants. He sees grafted cactus as being the next big thing. “Cactus adds structure, and the grafting delivers a pop of color,” he explains.

The mention of cactus makes Jim think back to the late 60s and early 70s, when sand art (a desert-inspired terrarium that involved layers of colorful sand) was the ultimate DIY project. “I made so many of those!” he laughs.
In Jim’s opinion, plants are the perfect stress reliever. “Plants just elevate your mind and spirit,” he says.

The Longeneckers built their home in Falmouth a few years prior to the incident at Three Mile Island. March 28 will mark the 40th anniversary of the accident. Pattie, who has devoted years of research to the subject of nuclear energy, will be appearing in two documentaries – one on WITF and another on PCN – that will revisit the event. 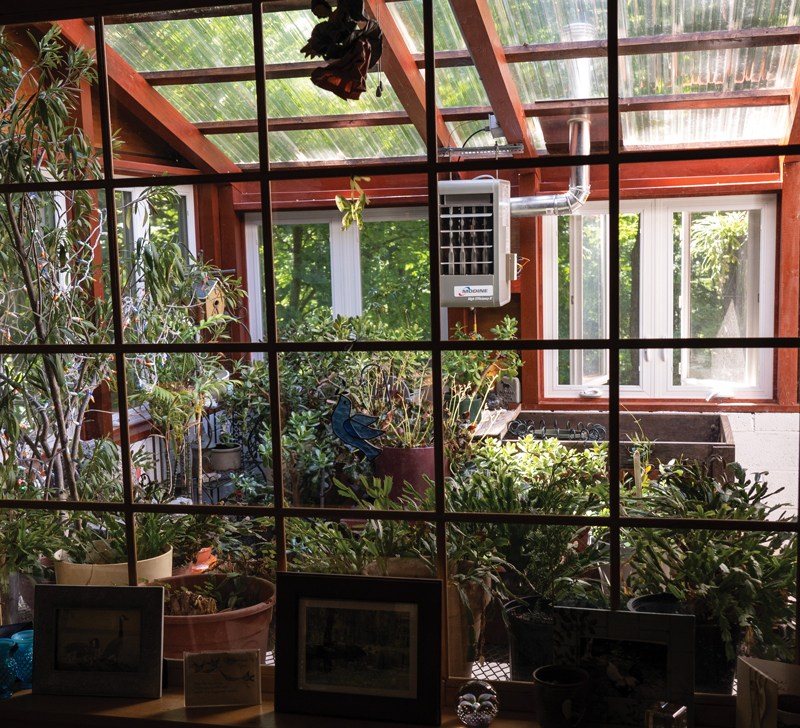 Pattie and John Longenecker transformed their greenhouse into a more practical garden room two years ago. The natural warmth of the room spills over into the adjoining kitchen. A window provides a view of the room from the dining room.

Because of their interest in plants – John is a retired plant pathologist with the state, and Pattie is an avid gardener – incorporating a greenhouse into the design of their home was always in their plans. As they were designing their house, John determined where the greenhouse would receive optimal sunlight and carved out a space that offers southeast exposure.

The Longeneckers spent about six years assembling surplus material to build their greenhouse. “It was a true greenhouse,” Pattie says of the glass and steel structure that attached to the house. It offered conveniences such as a water source for hoses, a drain and a propane heater.

Initially, the greenhouse was outfitted with a potting bench that allowed John to get ahead of the growing season by starting seeds in late winter. It allowed Pattie to overwinter her geraniums and ferns. “The geraniums you see in there are 10 years old,” she explains. “The ferns are probably 6 years old.” 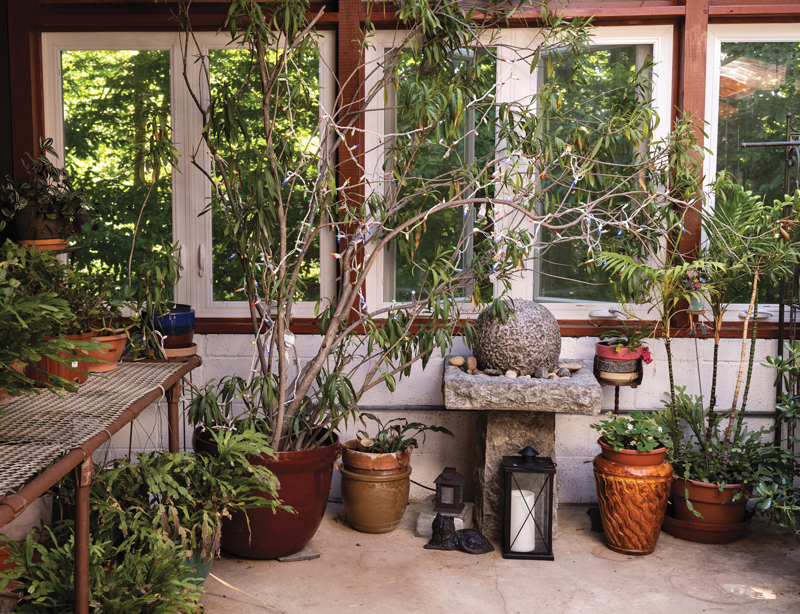 The Longeneckers’ garden room is filled with houseplants, as well as geraniums and ferns that Pattie overwinters. There is also an oleander tree they brought home from a trip to Texas decades ago.

Two years ago, they decided to remodel the greenhouse and transform it into more of a garden room. “We wanted something that’s a little more practical,” Pattie explains. Working with remodeling contractor Jeremy Hess, they maintained the dimensions of the original structure but replaced the glass with block walls that hold crank-out windows that offer an amenity: screens, which eliminate bugs coming into the house. Now, the sliding glass door can remain open and warm the kitchen. “It’s our version of passive solar,” Pattie says. The roof is covered with a translucent material that is perfect for the plants. A fan circulates the air.

Pattie loves to work in the kitchen or sit at the dining room table and enjoy her plants, especially the oleander tree they brought home from Texas decades ago. “It was 6-inches high when we got it,” she recalls. She enjoys the color show the Christmas cacti provide over the holidays. “Everyone feels better when they’re able to see and be around plants,” she says. “They’re aesthetically pleasing, and they bring color to our lives. I just love plants.”

Jim Showers’ soaring, light-infused bathroom is filled with all sorts of tropical plants, including his latest favorite, air plants. The bathroom, which is an addition he designed for his 18th-century home, opens to the many gardens that define his property.