After observing the judging of baked and canned goods at the Solanco and Ephrata fairs a few years ago, I wanted to follow the process to the state level – chiefly, the apple pie contest, whose entrants are winners of blue ribbons at local fairs. In Harrisburg, the best of the best throw down their heralded apple pie recipes and engage in a competition that’s as delicious as it sounds. 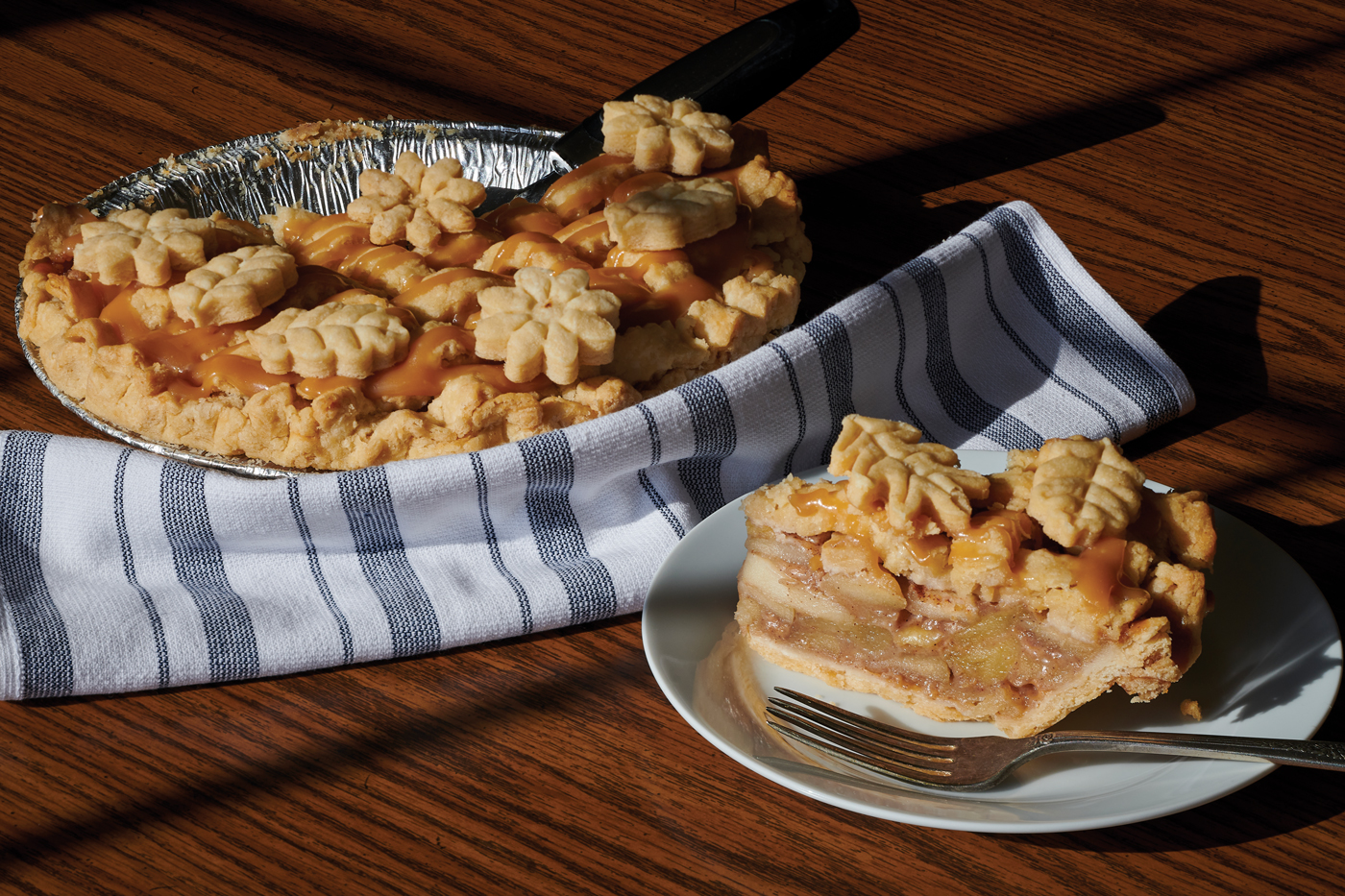 An apple pie baked by Deb Martin Berkoski. Brimming with apples (and not filling), this pie was baked perfectly. The sliced apples are soft with a fine tooth. Sweet notes of cinnamon and brandy define the flaky, buttery crust. The caramel isn’t overpowering or super sweet, but is chewy.

Pies must be baked from scratch in toto: “All ingredients and decorations must be edible,” and “at least 60% apples in the filling.” Winning at multiple fairs doesn’t give you a leg up on the competition: each entrant can enter only one pie. Recipes must be supplied for the pie and pie crust, listing preparation instructions with all ingredients, including quantities. 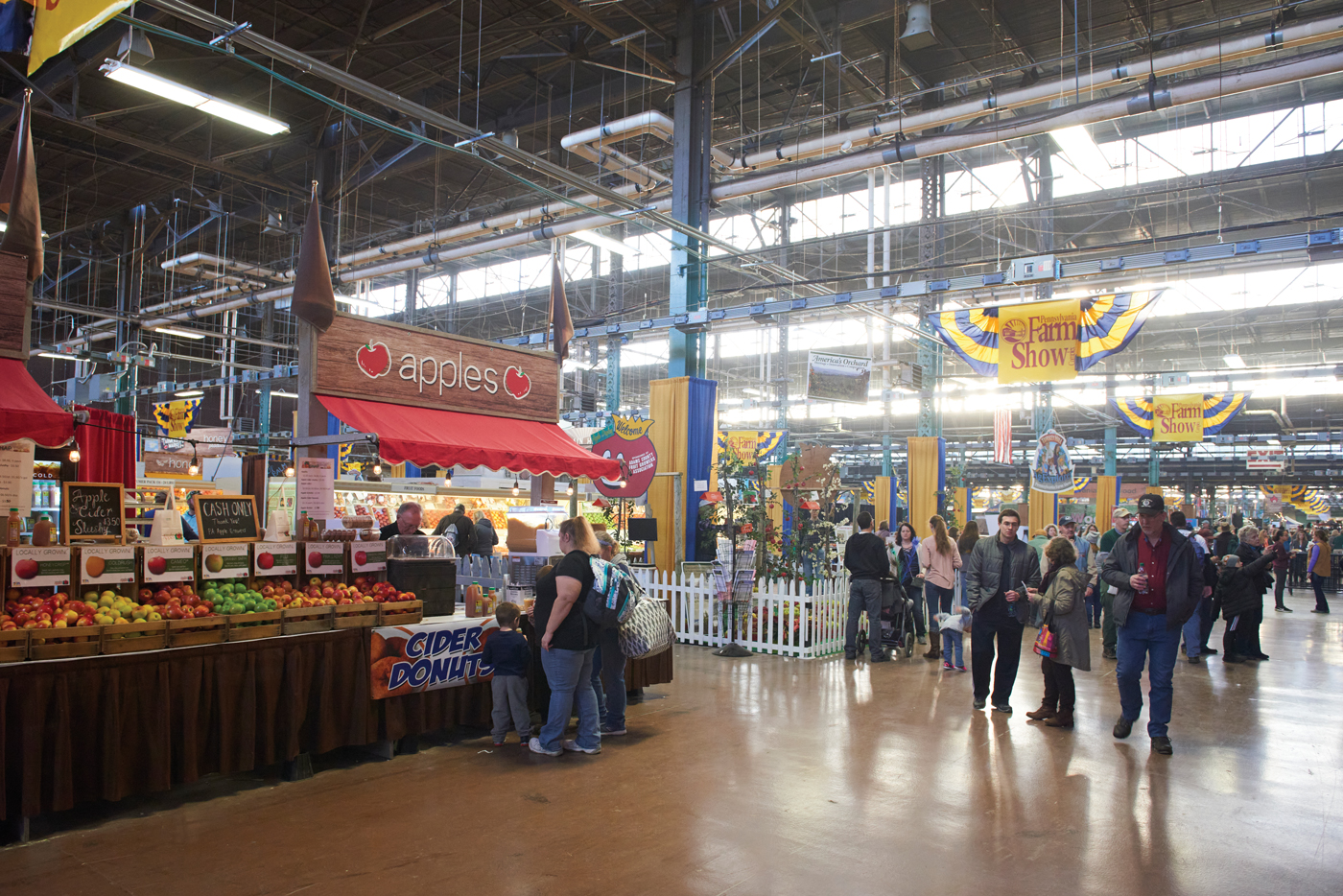 The floor of the Pennsylvania Farm Show Complex & Expo Center in 2019.

Judging at both the local and state level is based on a 100-point scale distributed across five criteria. They include flavor (30 points); filling, with attention paid to consistency, doneness, moistness and flavor (25 points); crust, based on color, flavor, texture and doneness (20 points); overall appearance (15 points); and creativity (10 points). The top three places are awarded $500, $250 and $100 prizes respectively, with the top five places receiving rosette ribbons.

Through exploring the baking skills that are needed to compete at the state level, two names repeatedly surfaced: Debra Martin Berkoski and her mother, Dorothy M. Martin, both of Conestoga. Together, the pair have won the Blue Ribbon Apple Pie Contest in Harrisburg four times, while earning countless ribbons in categories ranging from shoofly pie to canned goods. (Their talents also extend to floral arrangements and wreath-making.) “We don’t compete with each other,” says Deb. “We compete together.” Dorothy’s expertise centers on having an understanding of the fundamentals of baking. On the other hand, Deb likes to push boundaries. “Every fair has a Deb rule,” she explains. 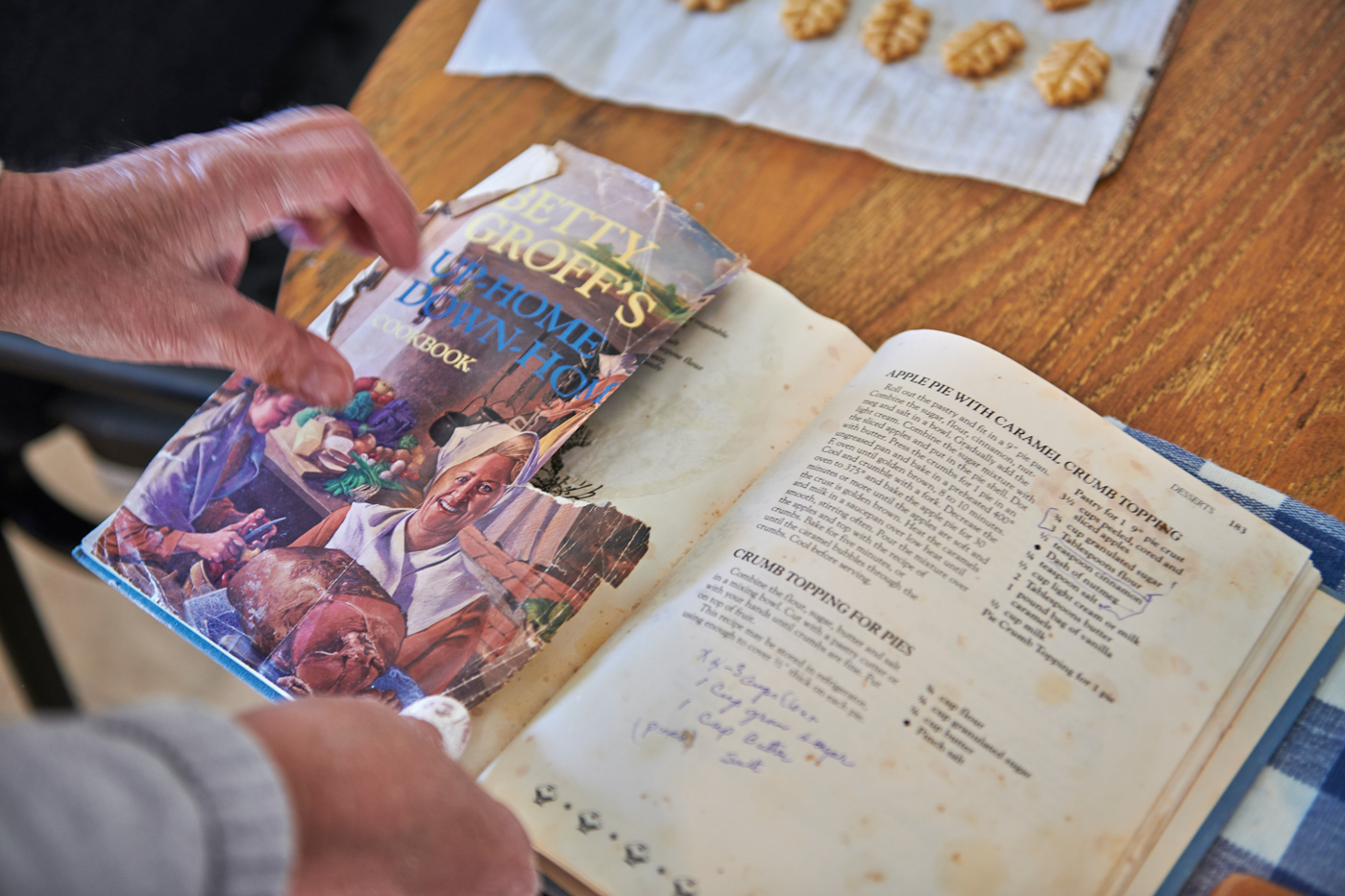 Deb consults Betty Groff’s recipe, “Apple Pie With Caramel Crumb Topping” from Up Home Down Home Cookbook, to create the crumble for her pie.

Ahead of the 2023 Pennsylvania Farm Show, Deb entered an apple pie at the 2022 Denver Fair and came away with the blue ribbon. “So I am off to the 2023 Farm Show,” she noted, relieved that she earned the requisite blue ribbon early in the season and didn’t have to undergo the stress of chasing after the award as fair season waned.

While the competition is hot on the state level, Deb is quick to underscore the fact that it definitely has a friendly side, which has fostered a sense of community among Pennsylvania’s bakers. “If I am beaten fairly, I will cheer you on,” says Deb.

When I first reached out to Deb with the premise of following her Blue Ribbon Apple Pie journey to the Pennsylvania Farm Show, she insisted we begin at Cherry Hill Orchards. Deb arrived ahead of me on a day in November 2021, in order to talk with the new owners and caretakers of Cherry Hill Orchards, brothers Corey and Craig McCleaf. Corey had taken ownership from Tom Haas a year and a half prior, and Deb had already connected on a personal level with the family. It was a continuation of the life-long relationship she had nurtured with this orchard and the folks who dedicate themselves to growing, selling and enjoying apples. It’s not a stretch to say she’s connected to the “core” of her ingredients. 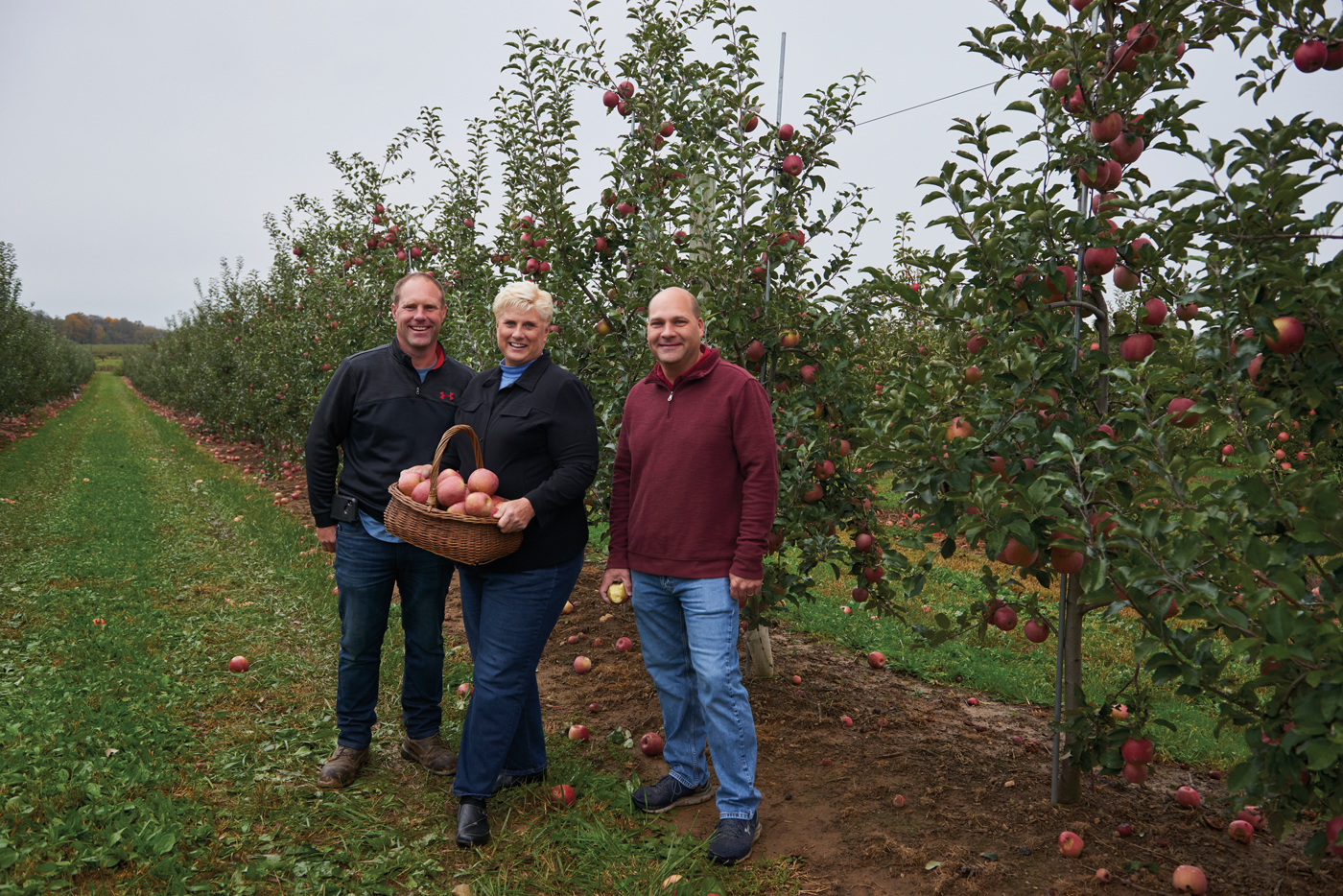 Deb with Cherry Hill Orchards owner, Corey McCleaf (left), and his brother, Craig McCleaf. Corey took ownership of the orchards in the spring of 2020.

Folks are often eager to learn where their food comes from and the next level of that understanding is developing a bit of a relationship with growers. Deb’s baking skillset is complemented by her investment in learning about producers and their harvest.

A tasty apple begins with the soil quality, paired with growing conditions that offer the right amount of temperatures, rainfall and crucially, periods of dry weather to sweeten the fruit. As Cherry Hill is located near the Susquehanna and Conestoga rivers, the climate suits the orchard well. 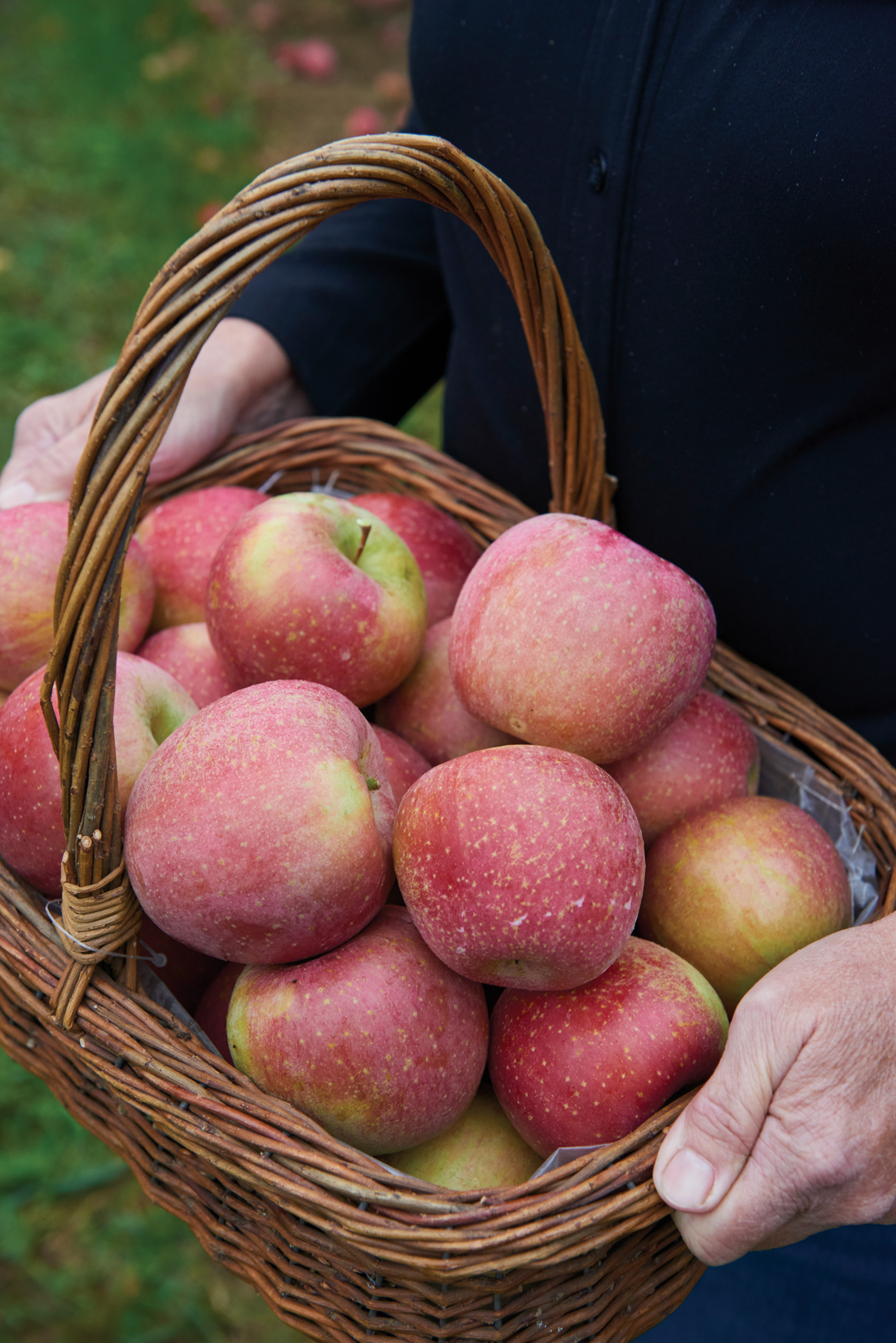 Tapping into the knowledge of Tom Haas and now the McCleaf brothers accounts for Deb’s first step to creating an award-winning pie. It starts with an understanding of seasonal quality – when it comes to being the best in the state, those ingredients need to be delicious.

Growers who know what you are after from a taste and texture perspective can quickly make recommendations. In Deb’s case, they understand she’s looking for choice apples with the right moisture content, flavor and ripeness – not only during the fall fair season but ahead of the state competition in early January. Sourcing apples from the same trees and bins as everyone else, Deb selected Northern Spy apples for her next pie. 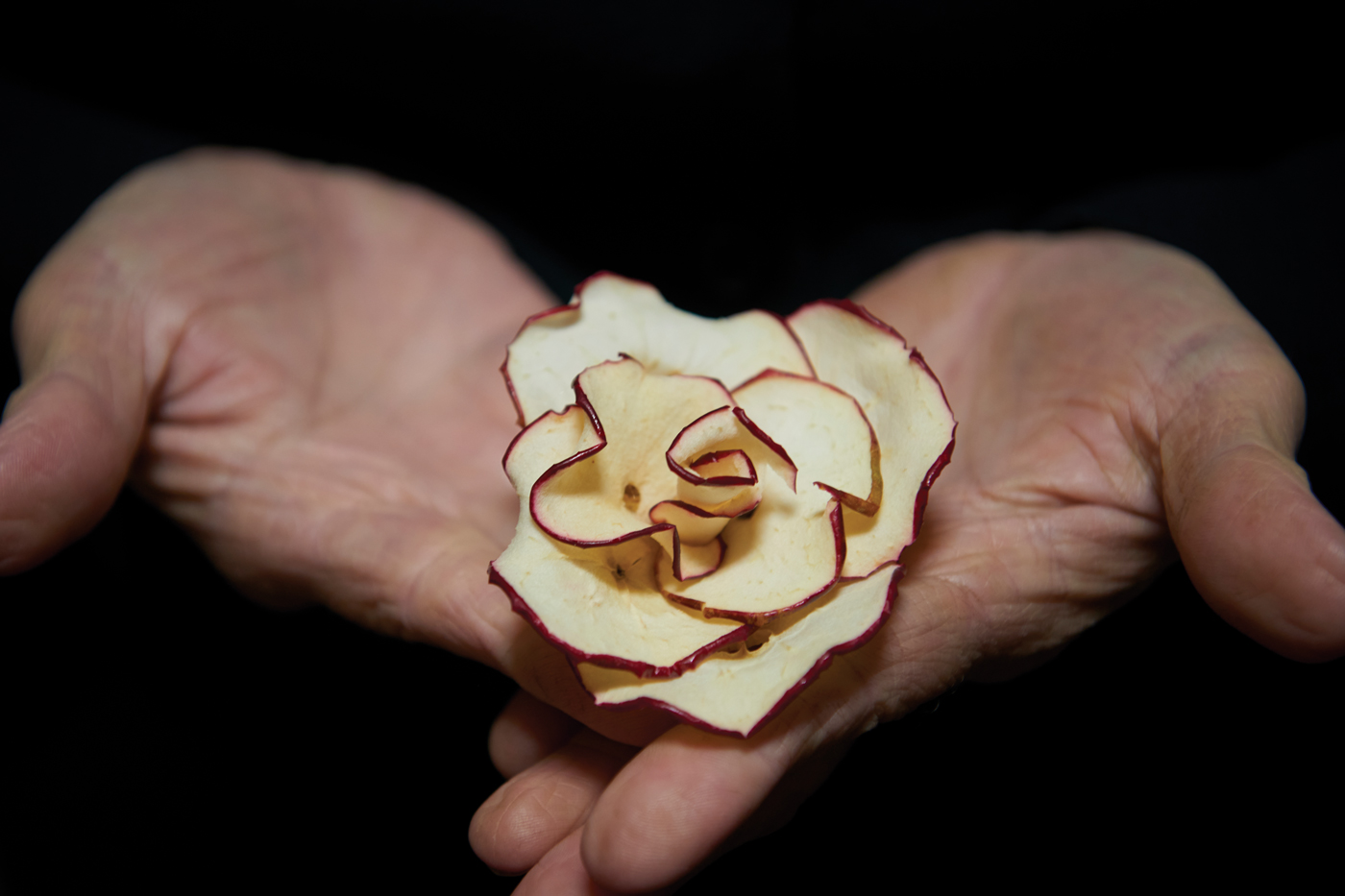 “All the apples we bake with for competition have come from Cherry Hill,” says Deb. “They have grown the apples for four state-winning apple pies. No other orchard can [make that claim],” she continues. “The orchard is about five miles from my home. The new owners grew up in Adams County,” she says of prime apple country in Pennsylvania. “They have been very good to work with and are open to new ideas.”

While there are “secrets” to her process, Deb willingly shares the inspiration behind her apple pie recipe: a signed cookbook inscribed to her from another legend in the local food network, the renowned restaurateur and cookbook author, Betty Groff, who was at the vanguard of promoting regional cuisine and helped to put Pennsylvania Dutch cooking on the culinary map 60 years ago. 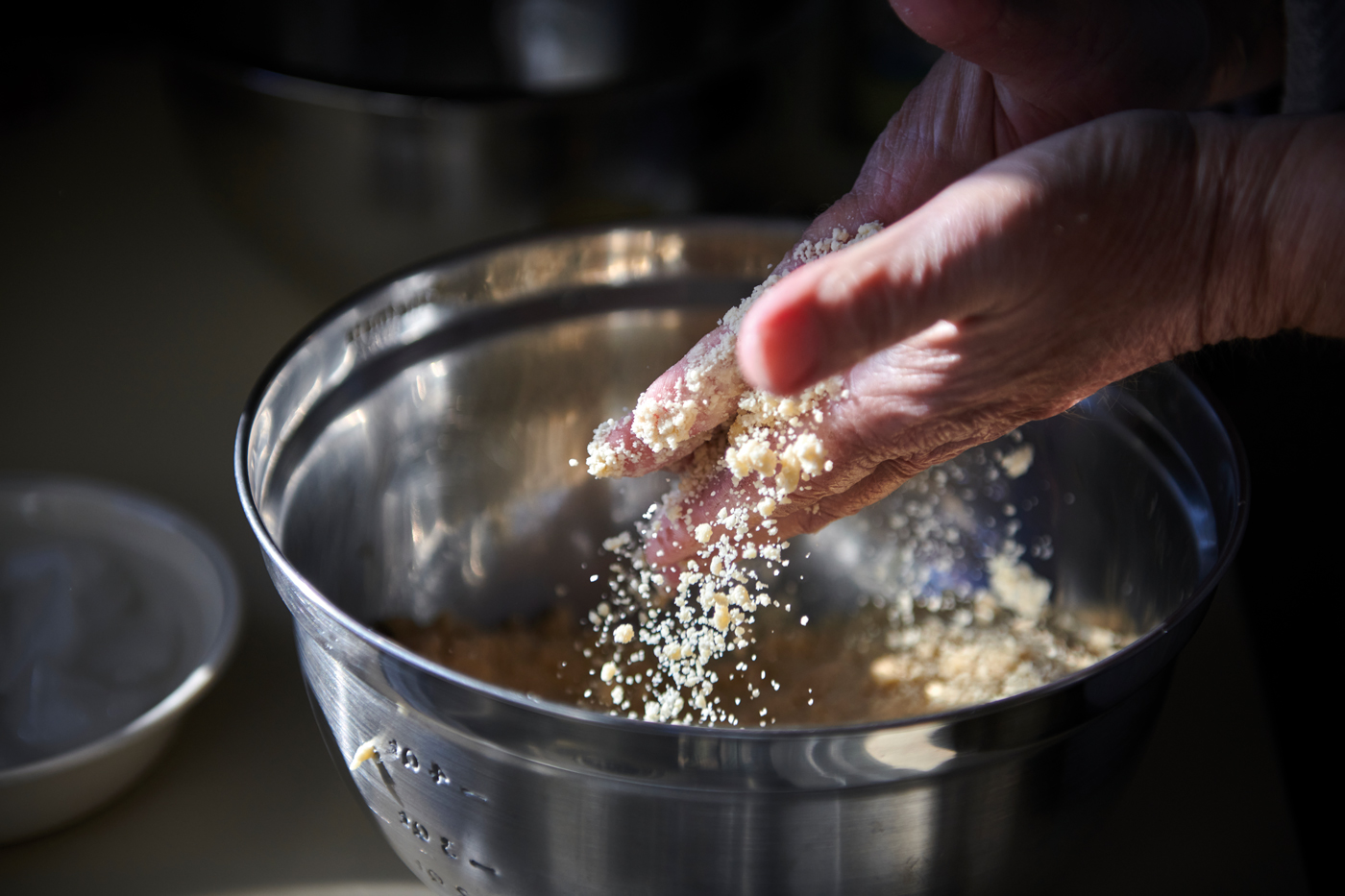 More recently, Deb has completed the Pennsylvania Fair judging course, which qualifies her to judge competitions. Wisely, she gained an understanding of what criteria judges are looking for in competitions.

For hopeful bakers, she offers a few crumbs of wisdom: wait until the pie cools to slice it (as long as three hours). If entering a pie into a competition, never take a hot pie, which can become soggy from the steam. The third tenet is to drive carefully! 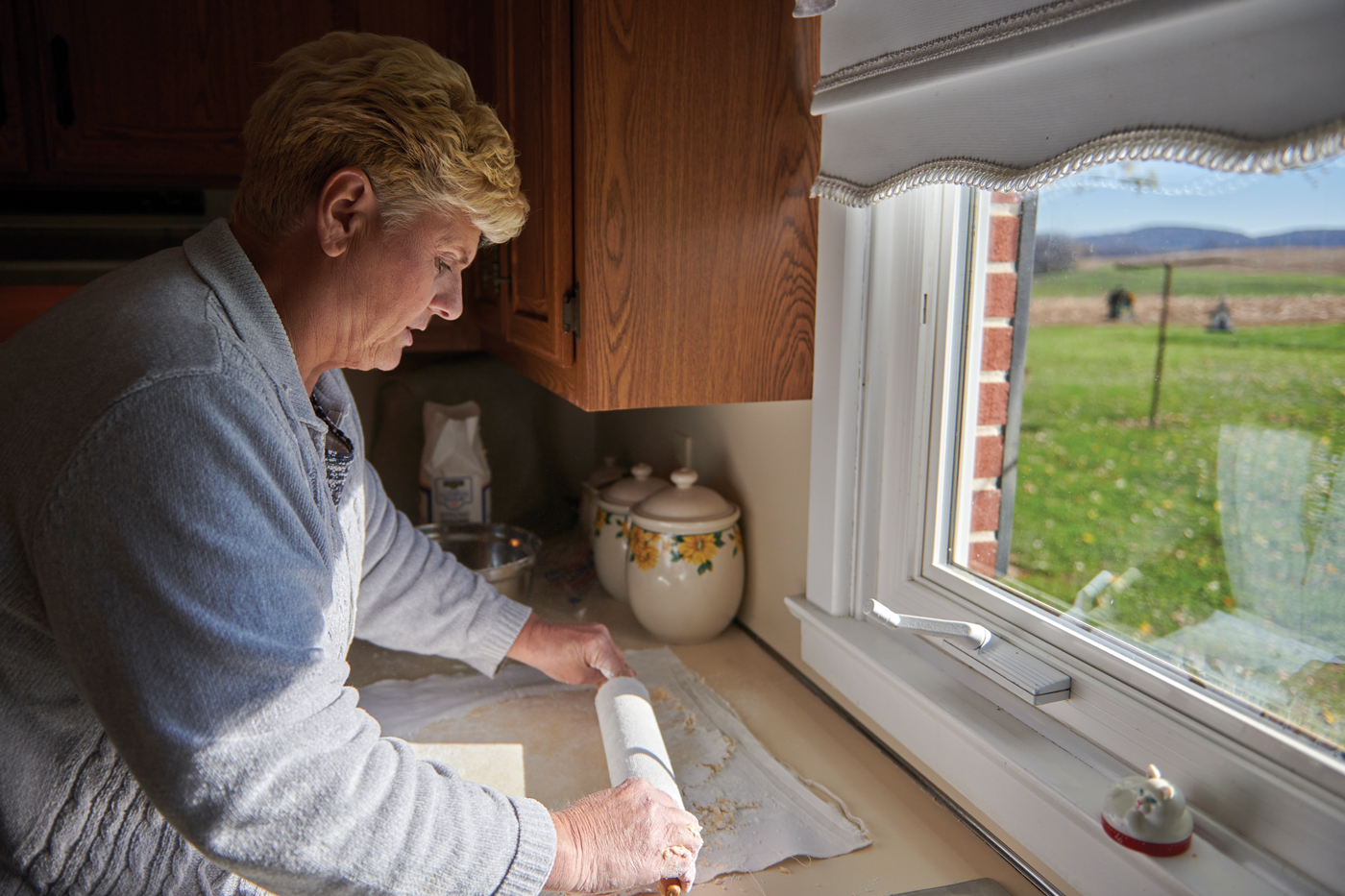 Deb at work in her mother’s kitchen.

Due to her time investment, Deb refrains from baking pies by request. She did make an exception for the 60th Anniversary Gala of the Long’s Park Amphitheater Foundation in September. Deb, who is a supervisor at the park, donated an apple pie to the fundraising auction. With bated breath, she watched as bidding ensued, finally stopping at a whopping $600. 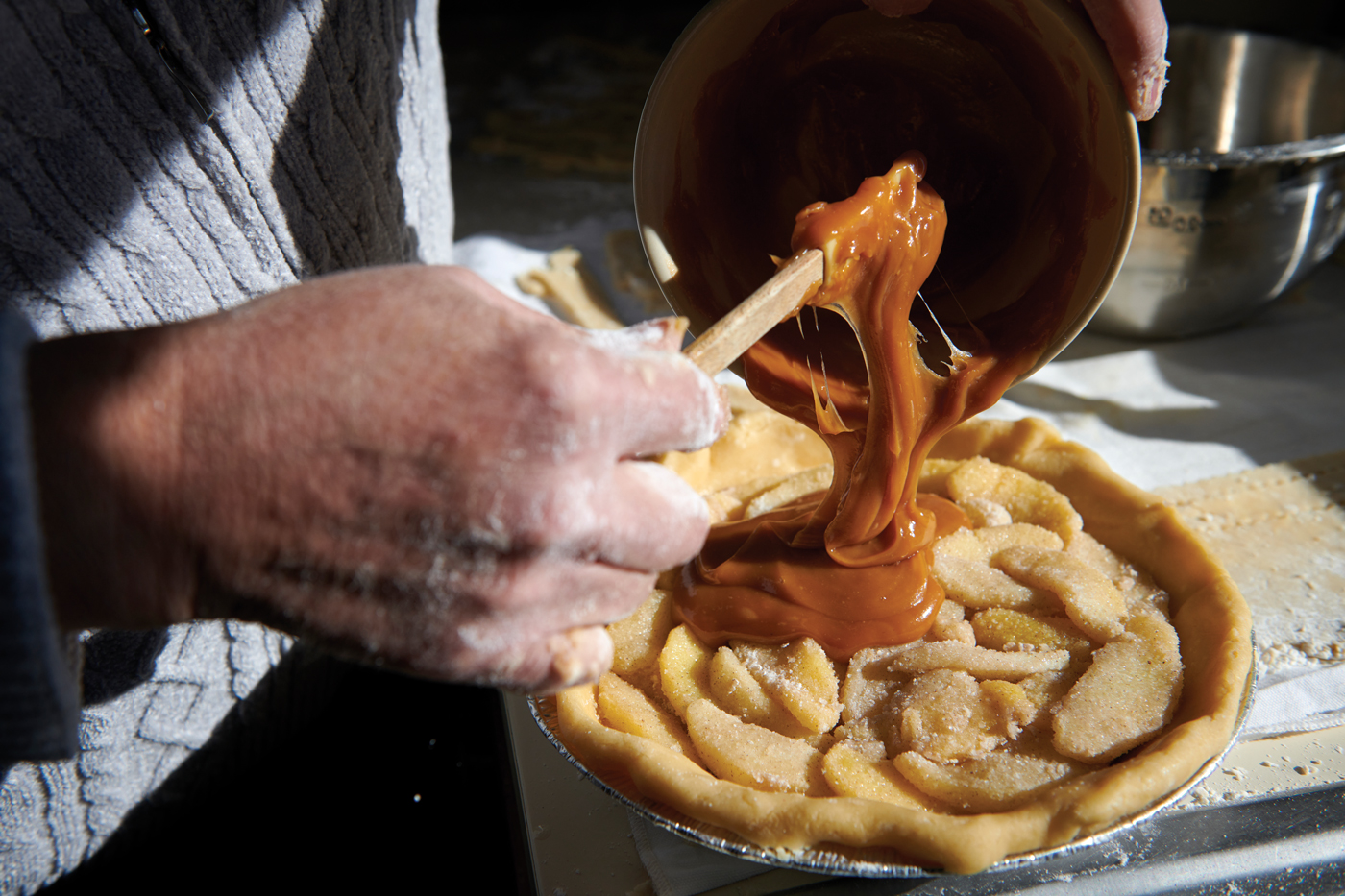 A layer of melted caramel – from Evans Candy – mingles with apple slices.

A master of showmanship, Deb then produced a second pie from behind the podium. She asked the second-highest bidder if she’d match the winning bid. The bidder did so without pause and Deb instantly doubled the total donations to $1,200. “The world record for an apple pie selling at auction is about $3,500,” says Deb, with a smile.

Deb and I reconnected a year later. On an auspicious November morning, we regrouped at the Martin homestead, a preserved former dairy farm in Conestoga. Deb chose to bake her apple pie in her mother’s kitchen. None outside the Martin family are typically present for such an eventful occasion that is shrouded in baking secrets, the demands of excellence and a classic family tradition. On this morning, both Dorothy’s absence and presence could be felt. Having taken a fall over the summer, the need for round-the-clock care prompted a move to a nursing and rehab facility. 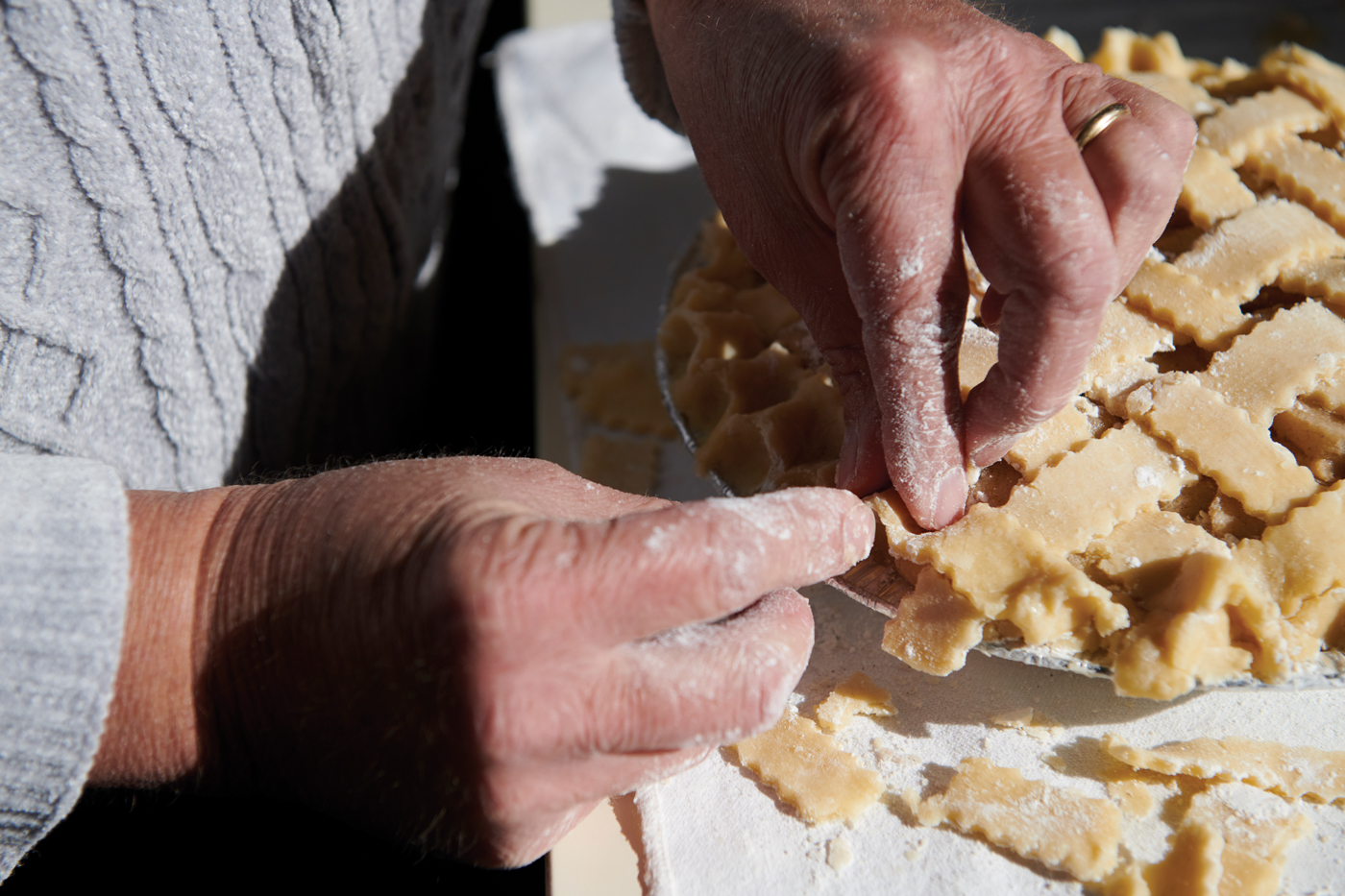 Dorothy epitomized farm life. She and her husband, Melvin H. Martin, assumed ownership of the farm more than 70 years ago. Determined to keep the farm in the family, she enrolled it in an agricultural preserve program. During the ’80s and ’90s, she operated stands at Southern, Central and West End markets, selling eggs, baked goods and vegetables. She entered her first fair competition (West Lampeter) in 1950, winning blue ribbons for her chow chow, sugar cookies and red zinnias. She was a life-long supporter of the 4-H program, always providing its benefit auction with a basket of her homemade jams and jellies. 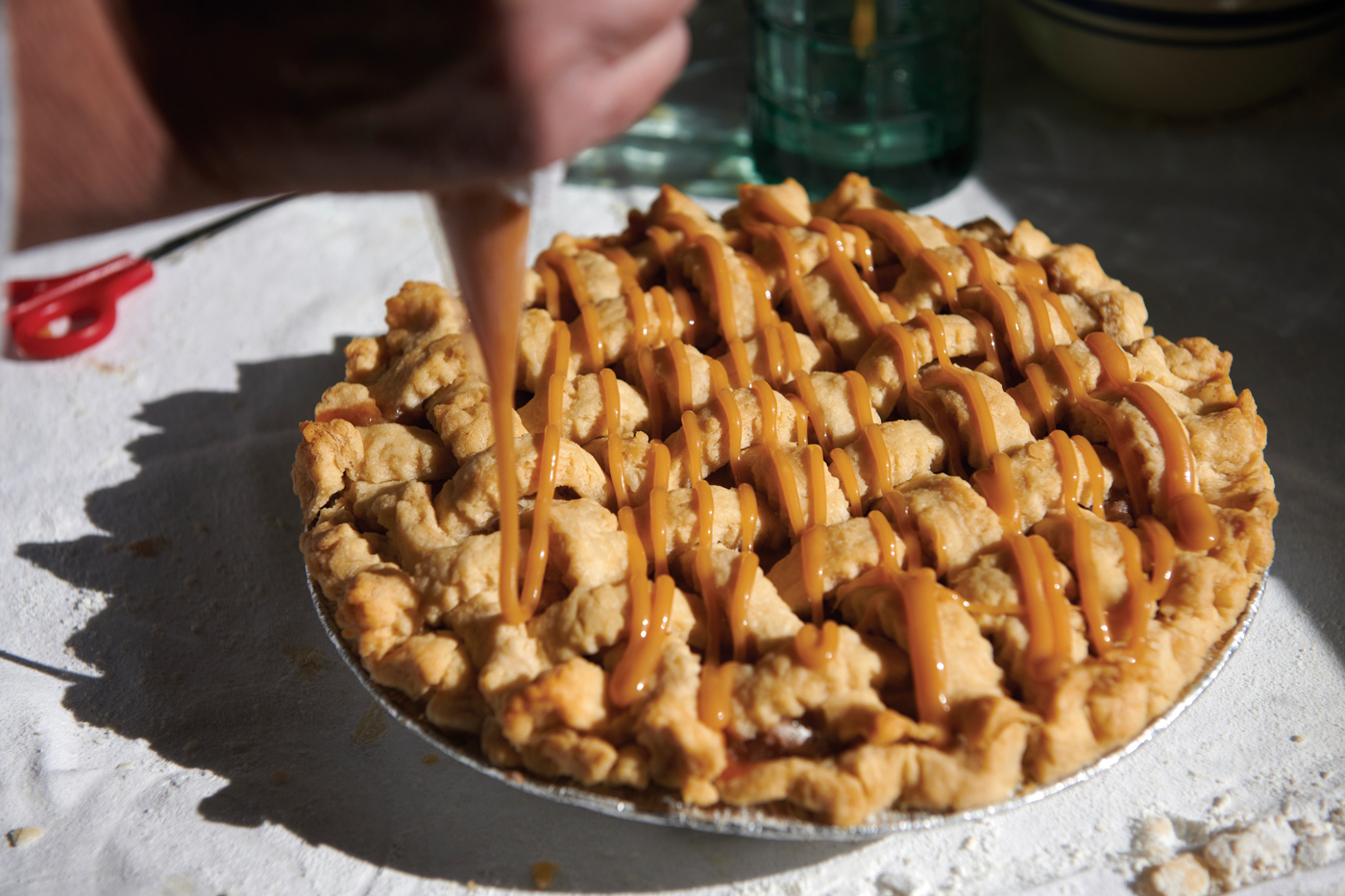 Additional caramel is drizzled on top of the pie.

Together, Dorothy and Deb brought home thousands of ribbons over the years, which serve as testament to the connection they forged through baking and other creative pursuits for the entirety of their shared lives. Their dynamic helped to shape one another and each other’s recipes, pushing themselves to new levels. That closeness is undoubtedly the secret ingredient in Deb’s baking, and on this November morning, it came in the form of baking in Dorothy’s kitchen. 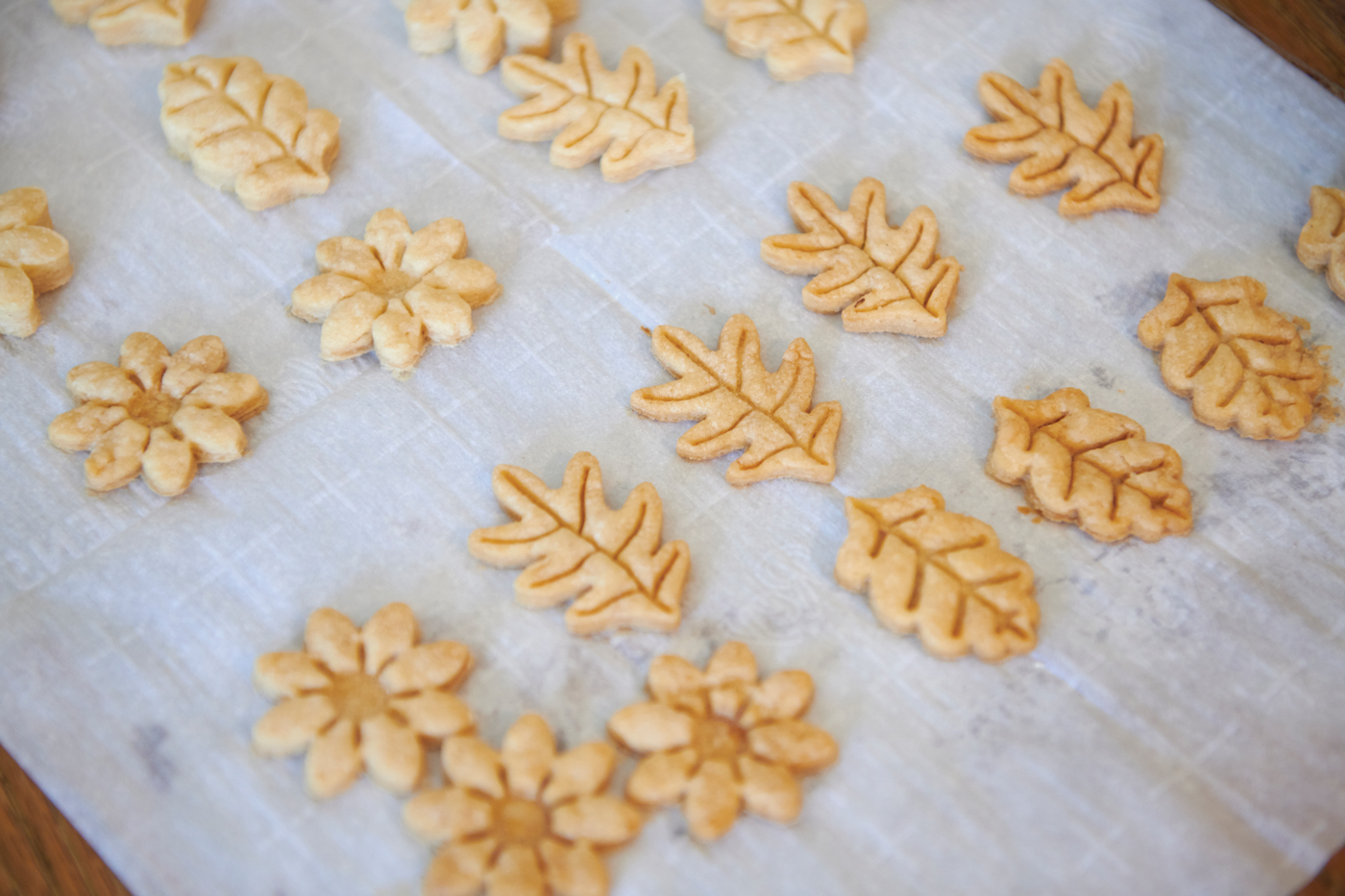 Pie dough baked in the form of leaves and flowers will decorate the top of this year’s caramel apple pie recipe.

Sadly, two weeks later, on Thanksgiving evening, Deb and Dorothy shared a final moment of togetherness. Deb held her mother’s hand as she passed away, days shy of her 95th birthday. Deb viewed her loss in baking terms, sharing with her Facebook friends that “I have a strong feeling God was short a Christmas cookie baker … and now he has a blue-ribbon winner.” 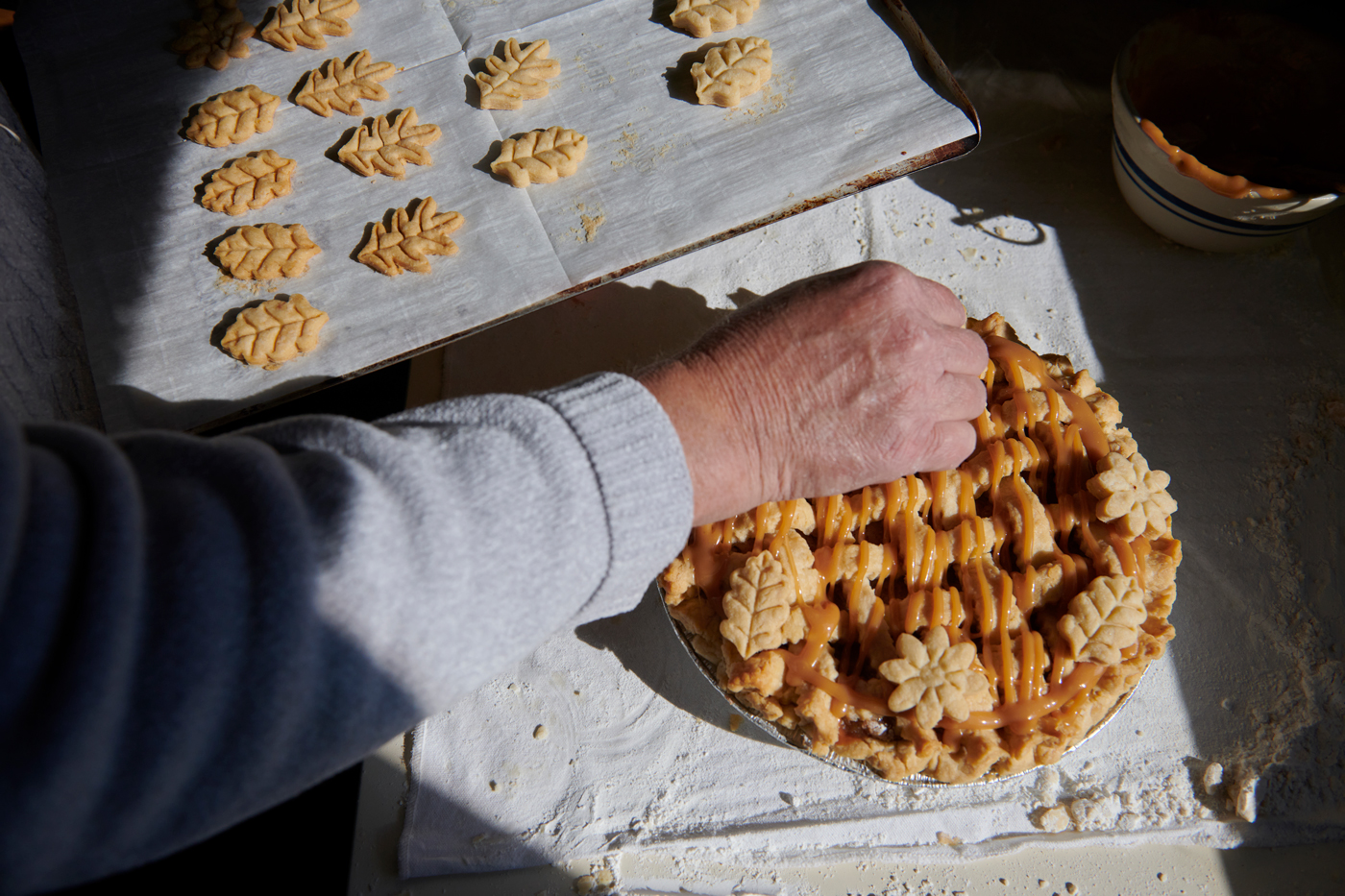 The Pennsylvania Farm Show will be held January 7-14. For details, visit farmshow.pa.gov.

An apple pie baked by Deb Martin Berkoski. Brimming with apples (and not filling), this pie was baked perfectly. The sliced apples are soft with a fine tooth. Sweet notes of cinnamon and brandy define the flaky, buttery crust. The caramel isn’t overpowering or super sweet, but is chewy.