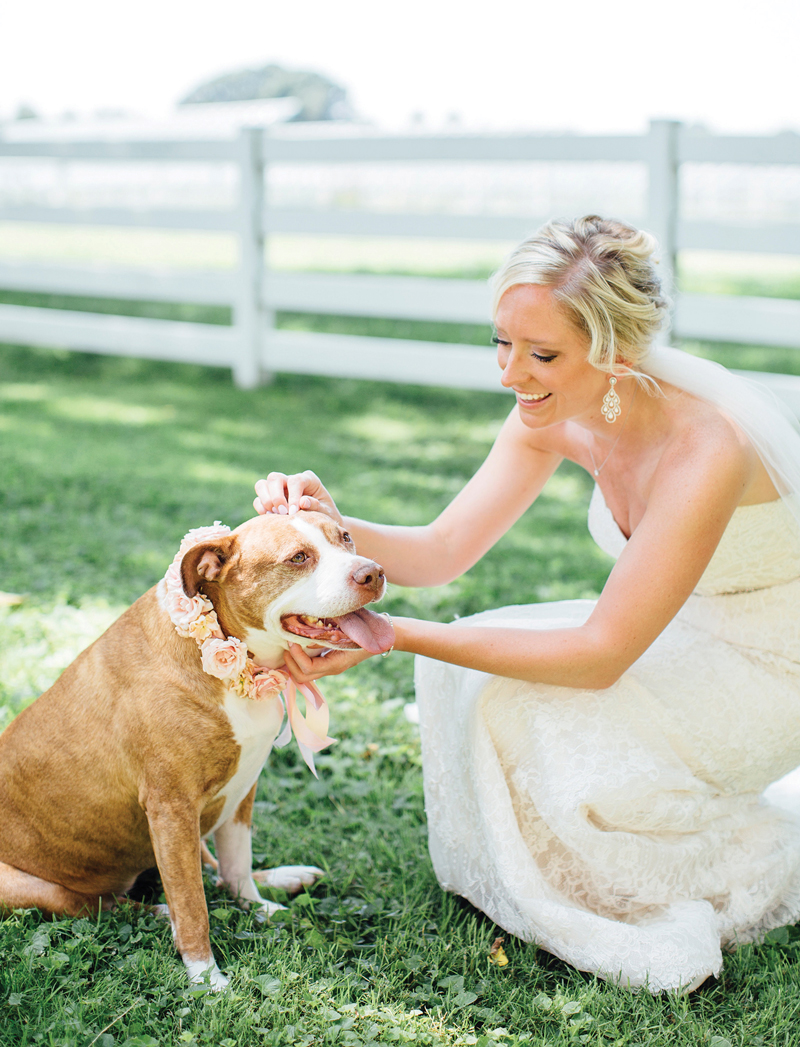 For Laura and Derric Krout’s wedding, her beloved family dog was present for the ceremony and photo session. The floral garland was designed by Sandra Porterfield. Photography by Madeline Broderick.

Dogs taking part in weddings has become a trend! Just as in a Hallmark movie, they’re serving as ring puppers, flower pups and greeters, not to mention they’re bringing the aaah factor to photography.

The question is whether art (as in Hallmark movies) is imitating life or is life imitating art? I think it may be a draw. Or, make that a withdrawal. Hallmark’s Countdown to Christmas movies, which began airing before Halloween, will go on hiatus after New Year’s. But never fear, the fairy tales will continue with Winterfest, Countdown to Valentine’s, Springfest … you get the picture. It all proves that the folks behind Hallmark movies have the formula down pat. 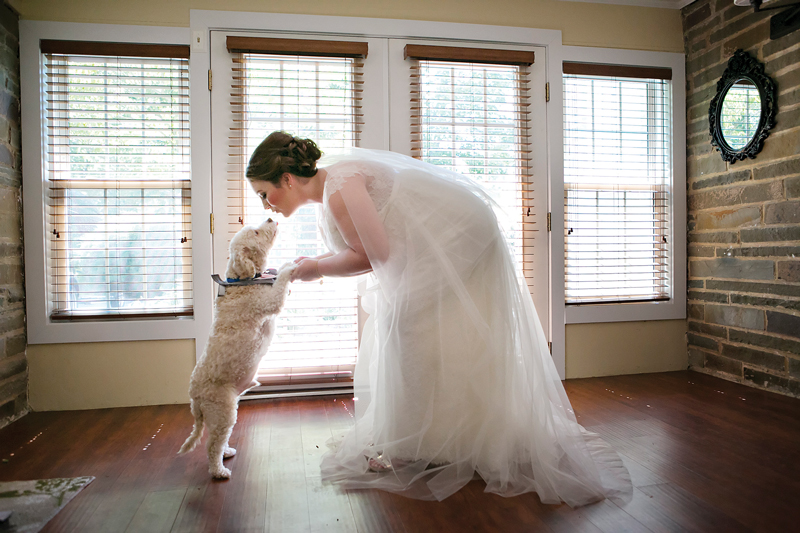 Photographer Leslie Gilbert captured some sweet moments between bride Meredith and her dog as she prepared for her wedding ceremony at the State Capitol building in Harrisburg. 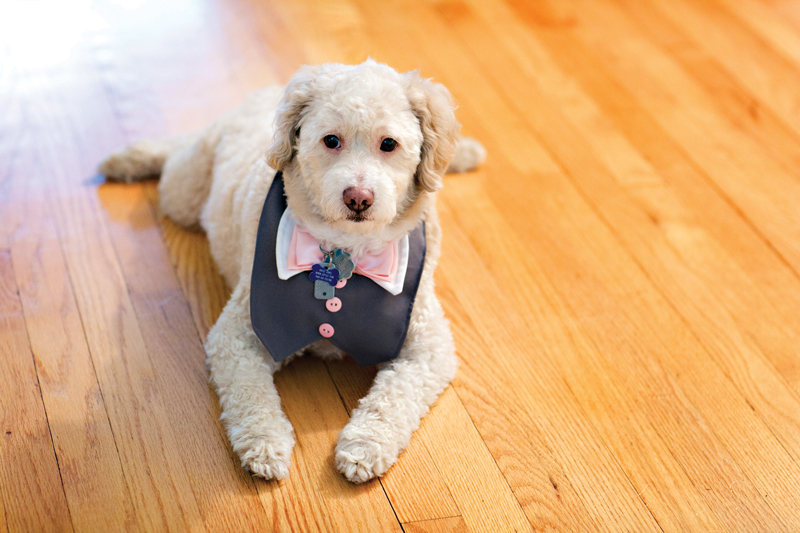 Before Countdown to Christmas became a phenomenon, Hallmark aired holiday weepfests, the most memorable of which focused on dogs finding their forevers at Christmas time. Dogs still figure into the Countdown movies, only now they serve to comfort lonely, career-driven singles, bring them together at dog parks or coffee shops and ultimately provide the cuteness factor at the resulting weddings. 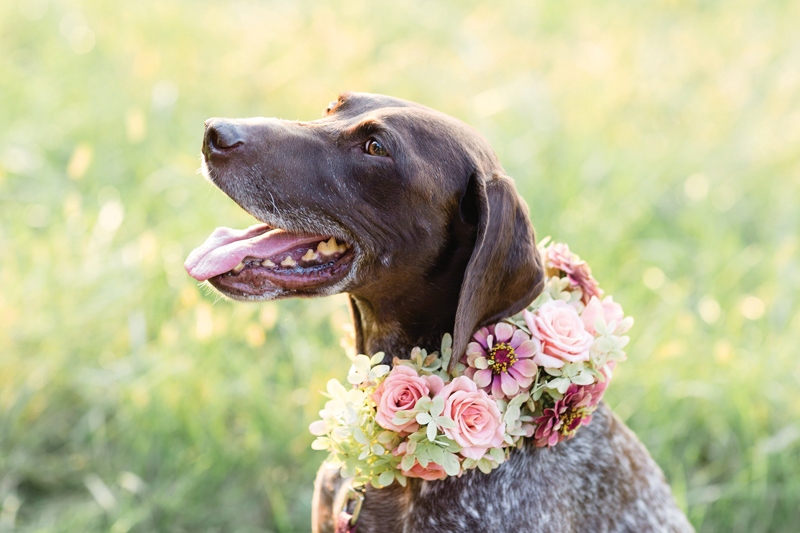 Floral Designer Sandra Porterfield has a willing model in her dog Abbie, who is always happy to assist in making sure Sandra’s creations are a perfect fit for canine members of a wedding party. Ashley Elizabeth Photography.

Just as most Hallmark movies seem to star Andrew Walker and Candace Cameron Bure, an adorable canine star has emerged in Gidget, a Border Terrier who is so talented that she plays both male and female roles. Her latest vehicle is the uber-romantic Marrying Mr. Darcy, which also starred some adorable King Charles Cavaliers.

To whom do we attribute the trend of including dogs in weddings (besides Hallmark)? The Millennials! For many members of this generation, dog ownership represents a rite of passage into adulthood. Millennials have even made love connections through their dogs. A dog represents their commitment to couplehood. Often referred to as fur-kids, the Millennials view their dogs as family. They want to take them everywhere – work, yappy hour, shopping, hiking, camping, grandma’s house and, yes, to their weddings.

But, as we all know – thanks to Jake the rescue dog in the Hallmark movie, A Bride for Christmas – dogs can have a mind of their own and can create havoc at a wedding. You need to negotiate this trend with your eyes wide open before you commit. Deb Erb, owner of Simply Events in Lititz agrees. “You need to take everything into consideration,” she says. “Yes, it would be fun to have your dog participate, but a dog can be unpredictable. You have to ask yourself if you can deal with the unexpected.” While Deb and her staff of coordinators haven’t been asked to plan a lot of weddings that include dogs, she estimates that each has helped with one or two such weddings. “Most involved laid-back dogs, and we had no issues,” she notes. Still, she can understand why couples would want to include their dogs. “Couples want to personalize their weddings, and including a pet can make it very special.”

What follows are some things to consider:

As much as you’d love to have your dog take part in your big day, you really need to make an honest assessment of his/her temperament. Is your dog obedient? Is your dog comfortable in crowds and around strangers? Does he/she acclimate to unfamiliar places? Does your dog interact well with kids? Is your dog food-aggressive? Territorial? Is your dog high-energy? Does your dog have good manners (who wants to have her silk dress damaged by an over-zealous dog)? If any of these questions cause you to hesitate, it might be best to forgo the idea. After all, a wedding can be stressful enough – why add to it? In Martha Stewart’s estimation, a dog should be “part of the wedding and not a distraction.” 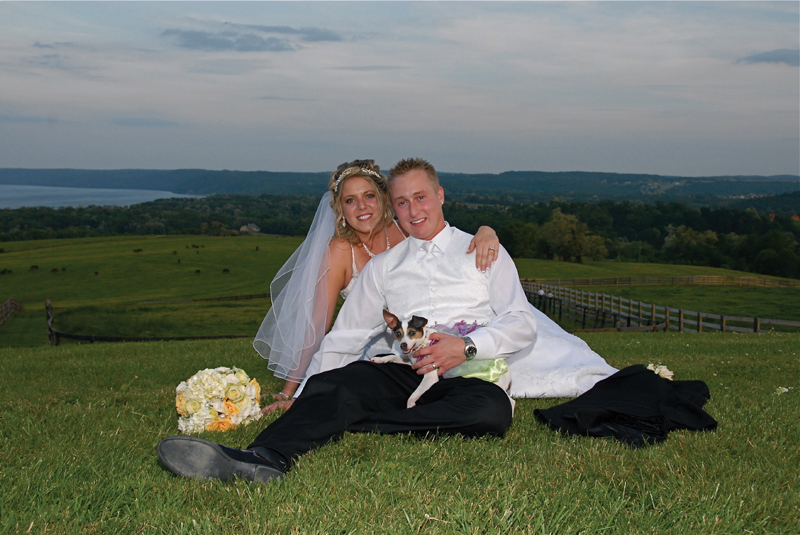 Erin and Ryan Kline were well ahead of the trend when they included their dog, Callie, in their May 2009 wedding at Lauxmont Farms in York County.

If you want to include your dog, such an idea needs to be at the forefront of planning your wedding. If your ceremony will take place in a church and you want your dog to play a role, you will need clearance. You’ll also need to discuss the idea with your officiant. Even if your church would be open to the idea, the officiant might have his/her own policy regarding pets at weddings.

If you’re still determined, there are plenty of options for ceremony sites thanks to the array of pet-friendly barn/farm venues, B&Bs, natural spaces and even hotels that have helped to make the county a popular spot for destination weddings. But, keep in mind that while they may welcome dogs to participate in the ceremony, health and safety regulations may bar them from attending the reception. That’s probably a good thing, considering the fact that a dog indulging in human treats such as chocolate, cake and rich food could result in you taking a trip to the emergency vet instead of the Caribbean. 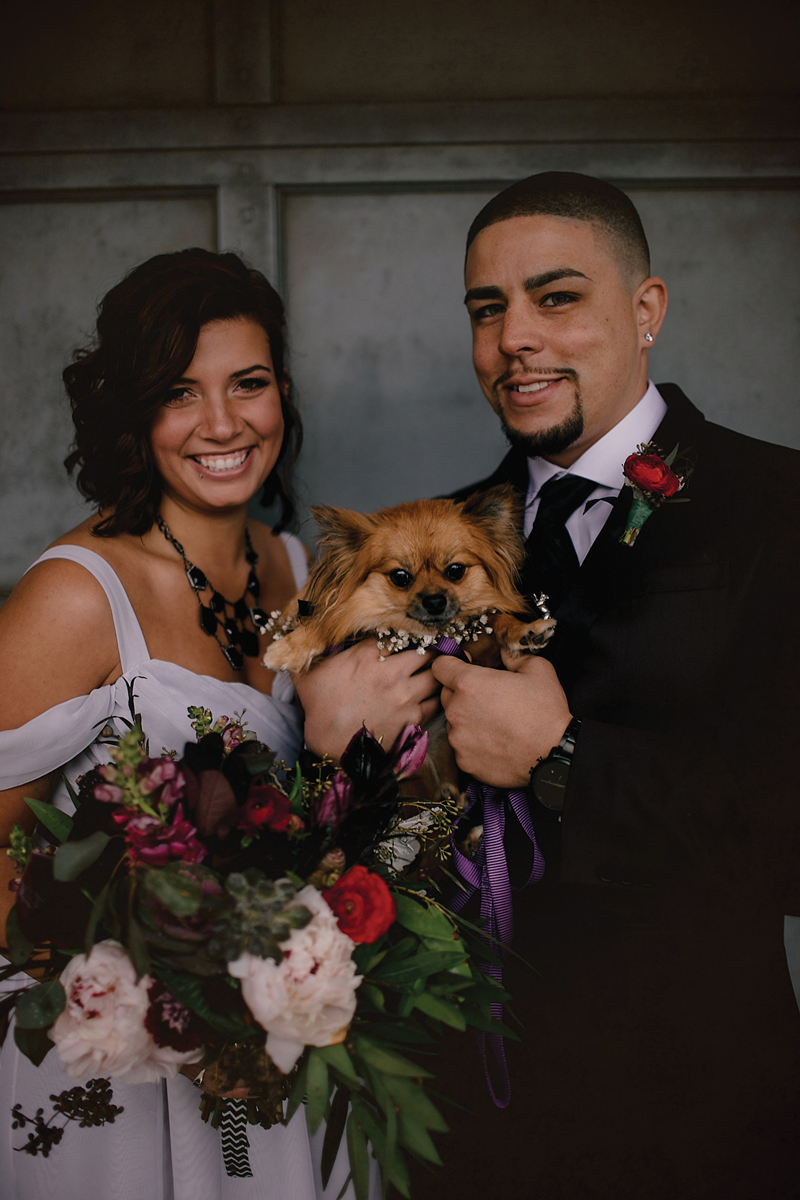 Tasha and Angel Lopez were planning a rustic fall wedding that would include a sizeable guest list. After looking over their budget, they had second thoughts. “We decided to do a smaller wedding so that we could take a nice honeymoon,” Tasha explains. The guest list was pared to 30. The search was on to find a venue. Tasha had seen a photo of the newly opened Thistle Finch Distillery and deemed it the perfect backdrop for their wedding. Unsure if Thistle Finch hosted private events, Tasha figured all they could do was ask. Thistle Finch agreed to the proposal. “We had our wedding on December 1, 2015, which was our 5-year dating anniversary. The date just happened to be on a Tuesday – when Thistle Finch is closed for business – so it all just worked out,” Tasha notes. The two were attended by their beloved dog, Alexi Gabrielle, who served as the ring bearer and flower girl and accompanied Tasha’s stepmother down the aisle. Sarah B. Photography and Landon Wise Photography. 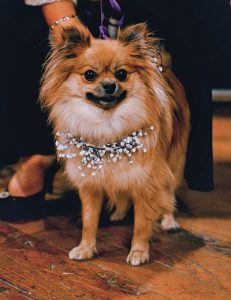 Share the fact that your dog will be in attendance with everyone. That includes your vendors (especially the planner and photographer), your families, members of the wedding party and your guests. Such a notification will be appreciated by those who suffer from allergies. A heads-up will allow them to take precautions or send their regrets.

If you’ve decided to include your dog in your wedding, you will need to recruit someone to serve as his/her handler. Perhaps a member of your wedding party has a dog-loving friend who could fulfill that role. If you have a planner, he or she might be of help in suggesting someone. Or, check with your vet, groomer or a pet-sitting service to see if they could recommend someone.

If your dog is playing a role in your wedding, he/she needs to dress for the big day. The options are mind-boggling. Check out websites such as Amazon and Etsy for ideas. However, going all out – full tuxes and gowns – might not be the best idea. Dogs who are not accustomed to wearing clothing could become fixated on removing them. Instead, keep it simple. A bow-tie that matches that of the groomsmen, a tulle tutu, a garland of flowers or perhaps a blinged-out collar would do the job (check out websites such Muttropolis, Etsy and Paco). Local shops sell those adorable harlequin collars. If you’re going the floral route, be sure to work with your designer to identify non-toxic blooms. Also, don’t forget to schedule a trip to the groomer for a nail trim, shampoo and cut. 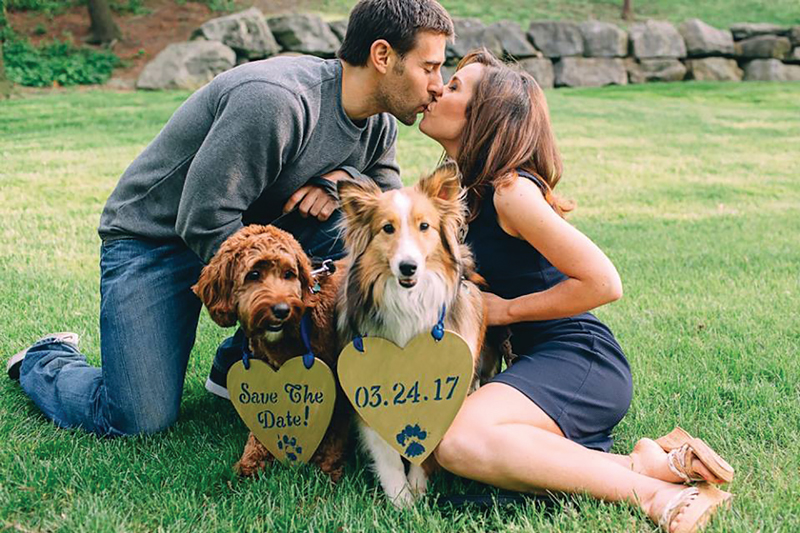 One Sunday, Eric Roering and his adorable red Cockapoo puppy, Stella, attended a Lancaster Polo Club match. Katie Errigo, who is a polo match regular, stopped and talked to them. By the time the match was over, Eric had signed Stella up for the puppy training classes at The Complete Canine Center, which Katie co-founded and where she served as director of training. It was a love match all around: Eric and Katie began dating, and Stella became best friends with Katie’s Sheltie, Booker. “Our dating life revolved around the dogs. I was working so much at that point that Eric and Stella had to visit me at the canine center to see me,” Katie explains. As they planned their wedding, they decided they didn’t want the stress of taking care of the dogs on their wedding day. “That was my one day off from taking care of dogs!” says Katie. However, they wanted to somehow acknowledge their love for their dogs and decided to include them in their engagement photos – one would serve as their Save the Date announcement. The foursome has taken togetherness to a new level – Katie and Eric are the masterminds behind the Fontana Candle Company, which is based in Mount Joy. Jeff Frandsen Photography.

After agonizing over the idea of having your fur-baby take part in the wedding, you’ve decided it’s just not a good idea. That doesn’t mean he/she can’t be there in spirit. Some ideas:

It’s become customary for couples to skip the wedding favors and instead make a donation to a worthy cause. For animal lovers, that could center on their favorite local shelter, rescue or other animal-related organization.