Adamstown is known to many as an antiques mecca, but it’s also the home of another long-standing tradition: Boehringer’s Drive-In.

Chris Schnader is the fourth-generation owner of the seasonal restaurant that opened its doors in 1936. Originally located on Main Street in downtown Adamstown, Boehringer’s moved to its current location along Route 272 in the late 40s. “It’s always been a seasonal business, even when it was located in town,” Chris notes.

He describes the current location as a “cool [as in neat], calm setting.” The cozy drive-in has no indoor seating, as the building where it is located is dedicated to a kitchen, a counter-ordering area and a waiting area. On busy days and nights, the lines for ice cream and food are out the door, but don’t worry, any wait is well worth it. 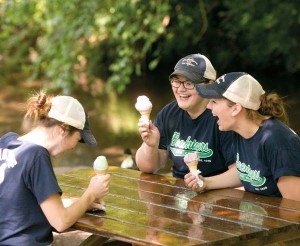 Employees enjoy an ice cream break at one of the picnic tables that offers a view of Little Muddy Creek.

Seating is at picnic tables that are nestled under the tree-lined bank of the Little Muddy Creek. “People like to sit at the picnic tables and watch the stream and the ducks. Often you’ll see people, especially kids, tossing French fries or tearing up their rolls to feed to the ducks,” Chris says with a smile.

Boehringer’s appeals to just about everyone. “We often see families with their kids, as well as grandparents and their grandchildren. Since we’ve been in business so long, we often see second- and third-generation customers. It’s not unusual for adults to tell us that their parents or grandparents brought them here as kids,” Chris reports. “It’s also a great date-night spot, and we have a lot of married couples tell us they came here when they were dating. It seems that nearly everyone has a story. We’re pretty unique – there aren’t a lot of places around anymore like ours,” he says.

Actually, Boehringer’s almost joined the ranks of being a fond memory. A fire in May 2014 caused significant damage. But, Chris was determined to rebuild and noted on a Facebook posting that “a sunrise is nature’s way of saying it’s time to begin again. And that is just what we intend to do!” Boehringer’s was back in business two months later.

All of the ice cream is made on the premises using a family recipe. There are 21 flavors of hard ice cream (no soft serve here), and Chris says that the “newest” flavor – coconut – was added about 15 years ago. Fruit-based ice cream, such as strawberry, peach and banana, is made with real fruit and not flavored syrup.

“We only have so much space, and to add more flavors, we’d have to take a flavor away. It would be tough to decide which flavor to replace since we’d be taking away someone’s favorite flavor,” he explains. 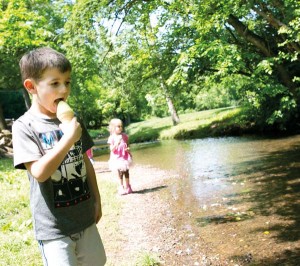 Nothing cools you off on a hot summer’s day than an ice cream cone and being by the water.

The most popular flavors are black raspberry, chocolate butter fudge (Chris’ personal favorite), and vanilla. Vanilla may seem like an odd top seller, but Chris isn’t surprised. “You can tell a lot about a restaurant by their vanilla and how flavorful it is,” he explains.

If you’re looking to capture a bit of Boehringer’s at home or at a summer barbecue or special event, ice cream is available to purchase by the half-gallon. If you’re eating at the drive-in and prefer a cone over a dish, there are sugar, waffle and pretzel cones from which to choose. Toppings for cones or dishes are available and include crushed Oreos, mini M&Ms and peanut butter cups.

The ice cream menu is augmented by milkshakes – regular and extra-thick made with any flavor ice cream – and sundaes. Chris stresses that milkshakes are “made the old-fashioned way, with real ice cream and real milk.” Sundae varieties include the ever-popular banana split, hot fudge and dusty road as well as peanut butter, crushed cherry, caramel, chocolate walnut, and chocolate marshmallow peanut.

For many, ice cream is the star of the show, but Boehringer’s also has a food menu that focuses on basic all-American fare. “We’re so much more than the ice cream,” Chris remarks. The food menu includes burgers, fries, chili dogs, cold subs and cheesesteaks. All are freshly made to order. “It’s simple,” he says, noting it appeals to kids and adults alike. “It’s nothing fancy; it’s just good,” is his assessment.

For boehringer’s the calendar doesn’t dictate the seasonal aspect of the business. Chris explains that his grandparents began opening on April 1, and his parents moved that up to March. The closing date is sometime in September. “Both our opening and closing dates have a lot to do with the weather,” he explains. “If we have a cold, snowy March, people don’t feel like ice cream. We try to extend the season into September as long as we can, but weather and availability of staff play a role in that,” he says of the high school and college students who are employed by Boehringer’s.

Boehringer’s is celebrating a milestone this year: 80 years in business! The popular drive-in offers 21 flavors of ice cream. The “newest” flavor, coconut, was added to the menu 15 years ago.