Wow! That was a fast five months between the Washington Nationals winning the World Series and the opening day (March 28) of the 2020 baseball season. Baby Shark is still resonating in my head!

I gave the Nats a good five, six, maybe eight pounds over the course of two months. It all began in late August, when we found a restaurant on Ocracoke Island (Outer Banks) that was carrying a Nats game on the television in the bar. It was one of those nail biters, so we instructed the waiter to keep bringing out the hush puppies until we told him to stop. At about our fifth round, the guy seemed genuinely confused. “We’re from Pennsylvania,” I explained. “This is our only chance to indulge in hush puppies.” The Nats won.

A couple of nights later, we found a bar close to our rental that would be carrying a smorgasbord of sports – a Nats game (another win), a Clemson football game (they won 52-14), the U.S. Open (Coco Gauff) and a Baltimore Ravens-Washington Redskins pre-season game (sell the team, Dan!). Stuffing ourselves with hush puppies resulted in a two-for-four night.

Back home, I didn’t have to scope out sports bars – I have Dish, and for some reason, I get all the sports broadcasts from D.C., which makes me happy as a clam because I can watch the Nats to my heart’s content during baseball season. Poor Charlie (my son), who lives in Allentown, also has Dish, but he gets all the sports out of New York.

Needless to say, getting through September made me a nervous wreck. That’s when I made a discovery – it seemed that every time the Nats played and I ate Turkey Hill’s Choco Mint Chip ice cream, they won. Believe me, some nights I’d go through an entire container, and I’m not talking about the little pint-sized ones. I became obsessed with eating that flavor of ice cream whenever the Nats played. One night I slipped up and just had the dregs of a container left and spent half the game scraping it clean. Thank goodness they won.

September, which included a do-or-die series against the Phillies, melted into October. The Nats made it into the one-game Wild Card round and had to play the Brewers. It was a choco-mint victory! Then, it was on to do battle with the Dodgers (got out of that series by winning three out of five).

Bring on the Cardinals and more Choco Mint Chip! 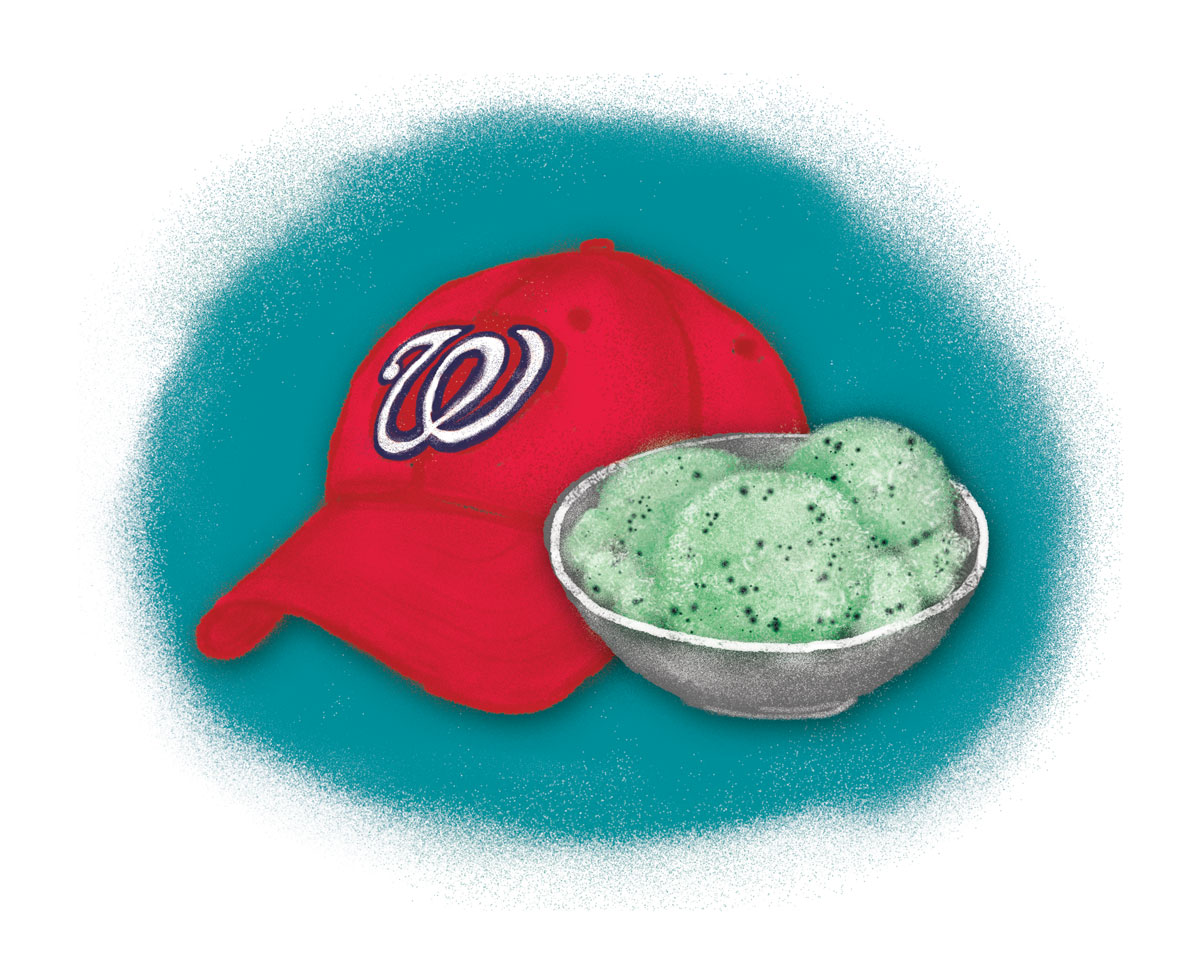 For one of the nights that Stephen Strasburg was scheduled to pitch, I planned my day to include running errands in the afternoon, ending with a stop to buy a container of ice cream. I passed through Strasburg on my way to Willow Street. The Strasburg Creamery beckoned – I recalled that in October 2018 they had a yummy flavor called Candy Corn (don’t knock it until you’ve tried it). “I’ll just get a dip,” I told myself.

So, I went in and upon discovering they didn’t have it, I weighed my options – bolt or be courteous and order something else. I got a dip of pumpkin and went outside to enjoy the beautiful weather. I was torn. Should I or shouldn’t I still get my container of Choco Mint Chip? The Nats needed all the help they could get! But, did I really need to eat more ice cream? I looked around and thought to myself, “Wait a minute. I’m sitting along Main Street in Strasburg eating ice cream. I think this will do the trick!” The Nats won that night – I’ll give the Strasburg Creamery the credit for that one.

That weekend I went to Allentown to watch Saturday’s game with Charlie and Jenn. It was his birthday, so I offered to bring a cake. I came up with the brilliant idea to have it resemble a baseball. I wanted to have Oregon Dairy write “Go, Nats!” on it but I was afraid it would jinx the team and nixed the idea. We devoured the cake and the Nats won 3-1.

While watching the game, Charlie suggested that I should check out a DC sports radio show called The Sports Junkies that is simulcast on NBC Sports Washington. I did so that Monday and got hooked. The show goes on the air at 6 a.m. I was regularly calling it a day well after midnight because I had to watch all the post-game coverage on FOX and MLB. However, without fail, I would wake up to watch The Sports Junkies at 6 on the dot. I was not only gaining weight, but I was suffering from exhaustion!

From people who called into the show, I learned that I wasn’t the only person who had developed strange eating habits, wore the same shirt, sat in the same place, etc. for each game.

The dream season came to an end on November 2, with a parade through Washington. Charlie and I went. I’m still looking at all the tchotchkes I bought and wondering, “What was I thinking?” There’s something curious about the calendar I bought. Anthony Rendon is Mr. December 2019. Did he already know he would be leaving when he posed for the picture last summer? Otherwise, he would have been a natural for Mr. October 2020.