Olive oil fans range from passive to obsessive; I’m about in the middle. Whether a bottle sits in the cabinet as an occasional ingredient or the home cook knows the molecular advantage to heating olive oil and butter for frying the perfect egg, there is no doubt that the bottled olive extraction is a staple in kitchens around the world. 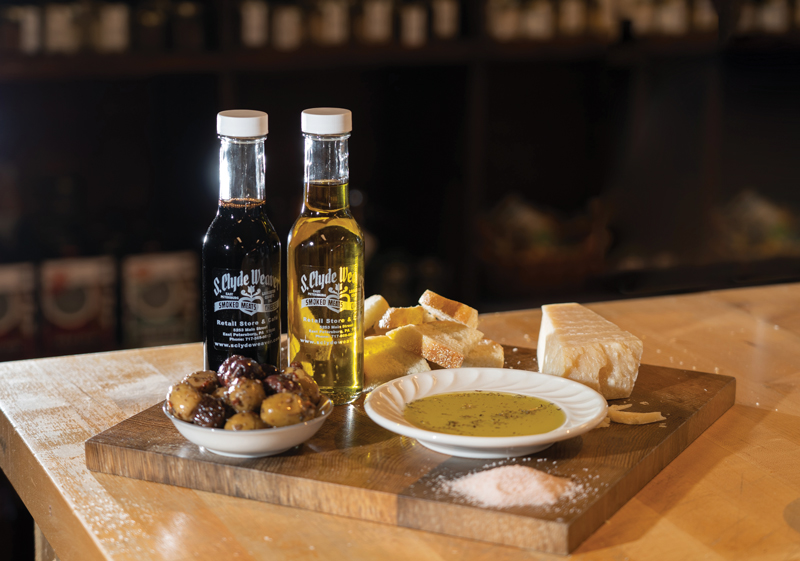 The production of olive oil dates back to at least 2400 BC in the annals of Eastern Mediterranean history. More than 3 million metric tons of olive oil are produced annually worldwide. Olive oil is used for cooking and eating, in religious ceremonies, and in soaps and other skincare items. It has even been used as lamp oil. Claims of it being a health benefit continue to grow.

With all the choices available – from your local grocery store to specialty shops – how do you know what to buy? For some guidance, I turned to my son, Tyler Upton, who is now the executive chef at National Geographic’s Tutka Bay and Winterlake lodges in Alaska. “If I could give any advice to the home cook, it would be this: stop cooking with your olive oil. I don’t mean stop using it, but rather stop heating it in your pan before sautéing,” he says. “Doing so destroys the nuances we all love about it; rather, finish your food with olive oil. You’ll find it makes all the difference. Not all olive oil is created equal, so taste a few kinds to find what suits you.”

Following his directive, I visited three spots in Lancaster County that specialize in olive oil.

The folks at S. Clyde Weaver have been in the olive oil and balsamic game for a while. (You can’t find premium olive oil without balsamic vinegar.) In fact, they’ve been in the food business for nearly 100 years. The company’s namesake and his wife, Emma, not only got married in 1920, but they launched a business that specialized in specialty meats and cheeses. Initially, they sold their products at local farmer’s markets. Success led to a storefront along the Manheim Pike. The storefront grew by leaps and bounds and was joined by a satellite store and eight regional market stands.

I first spotted the shiny metal containers (called fustis) filled with oil lined up against the back wall in the retail store and café in East Petersburg several years ago. I thought I’d head back and check in with Tim Godshall, the general manager of retail operations. 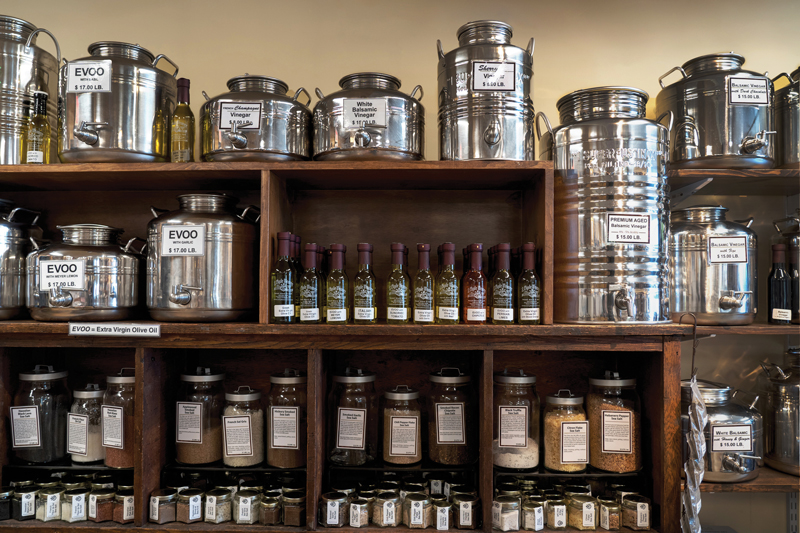 “We’ve been selling olive oil and balsamic for 10 or 12 years now,” Tim says, as I peruse the selection. “Back then there was a big need that wasn’t being filled. It made sense because we do a lot with imported cheeses and meats.”

The big seller at S. Clyde Weaver is the premium-aged extra virgin olive oil (EVOO). As fads and flavors come and go – I sampled the new sundried tomato EVOO – the premium-aged stands the test of time for its consistency.

“We try to get different flavors in and out by working with our importers,” he explains.
The store carries 23 different olive oils and balsamics. As we begin to talk about balsamics – I was drawn to the white balsamic with mango and passion fruit – Tim shares an expert tip. He likes to use balsamics in grilling, especially fruit. 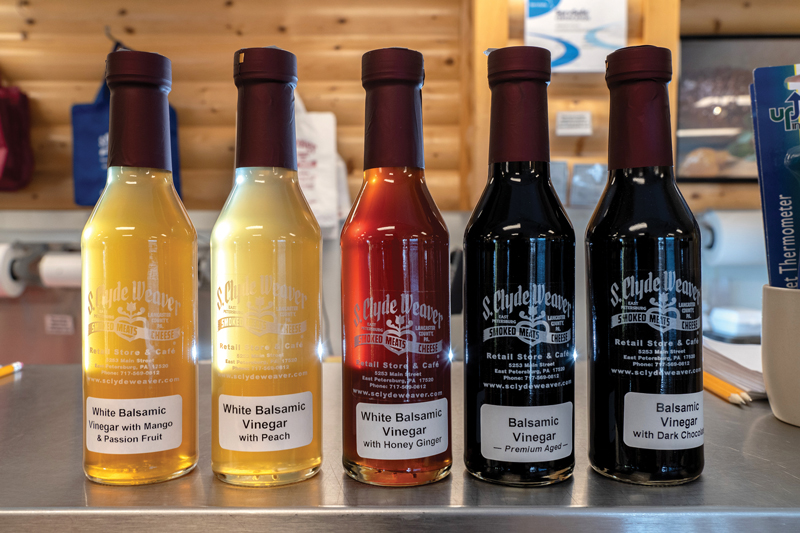 “Peaches are my favorite. Peel it, cut it in half, soak it in balsamic for a little bit, and then throw it on the grill. It caramelizes. It’s so good,” he adds.

From the outside, Olio in Lititz appears deceivingly small. Inside is a massive retail area featuring hundreds of items ranging from olive oils to specialty honey, salt and maple syrup. And, you can taste almost everything!

I ran into co-owner Joe Desimone, who was happy to greet me when I walked in with my family. After a bit of perusing on my own, I enlisted Joe’s expertise, and he explained how blending balsamics can lead to some interesting flavors. Balsamic is a thick, dark and usually aged vinegar made from grape must. Because it is not regulated as closely as wine or even olive oil, balsamic can range in composition – perhaps with the addition of wine vinegar – and cost. This also allows for some extremely fun flavors.

Joe leads me toward the back of the store where he pours me a sample of the garlic balsamic. I taste it and describe it as garlicy but a bit sweet. Then, he pours me a sample of the hickory balsamic; it’s smoky, but not overpowering. Next, he combines the two, and I know grilling will never be the same again!
“I love this combination,” he says. “They’re both good separately, but together they become something else completely.”

We head over to a fusti tagged with a yellow starburst reading, “Joe’s Choice.” This is the 25 Star, a classic balsamic from Modena, Italy, which has been barrel-aged using traditional methods. I can appreciate its thick consistency and pungent taste. By now, my kids had found the table filled with chocolate balsamics and were waiting patiently for an adult to tap a sample. Chocolate marshmallow balsamic is exactly what it sounds like.

When it comes to oils, I found two unique items I really like. The Citrus Habanero Fused olive oil would be great for cooking, maybe finishing off some roasted vegetables. The Sonoma-smoked EVOO will inspire a grilled finish without becoming too intense. 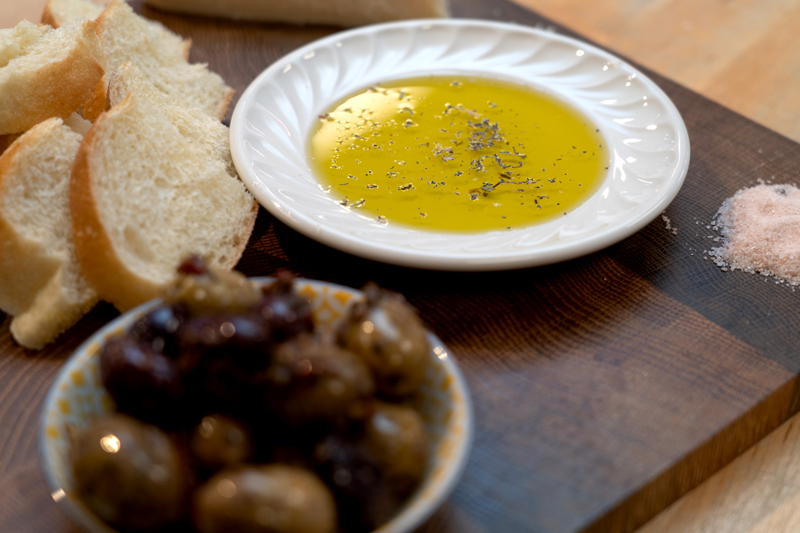 Seasons is a micro-chain specialty store owned and operated by Tim and Soraya Aguilar Balshi. Owners of an olive oil import business, the couple noticed a trend in olive oil taprooms opening in large metropolitan areas and decided Lancaster was ready for one in 2012.

When it comes to olive oil, Seasons offers a great selection of regional varieties. You can taste the difference between oils from Chile, Australia, Greece and Spain.

During a recent visit, I came home with a cranberry pear rosé white balsamic, which we use with spinach salads. But, what I really like is the store’s selection of oils beyond the olive. From avocado to roasted pistachio, these unique oils can add that secret finesse to a number of dishes.

As Chef Tyler suggested, I tried enough olive oils to find out what suits me. I’ve become a fan of mono-varietal Arbequina olive oil. The aroma is usually big, and the flavor is mild. Notably from Catalonia, Spain, Arbequina olives are now grown in several climates around the world, including California. All three stores in Lancaster County carry at least one Arbequina oil, so I’m assured of always being able to find some.