Each spring, the staffs at garden centers often hear the same question: “What can I grow that is unusual and no one else has?”

At this time of the year, nurseries are bringing in more stock every day, which means the selections are at their widest. By shopping early and getting plants in the ground on warm spring days, your selections will have a longer growing season to mature and establish strong root systems.
If you’re looking for something different, here are some of my suggestions: 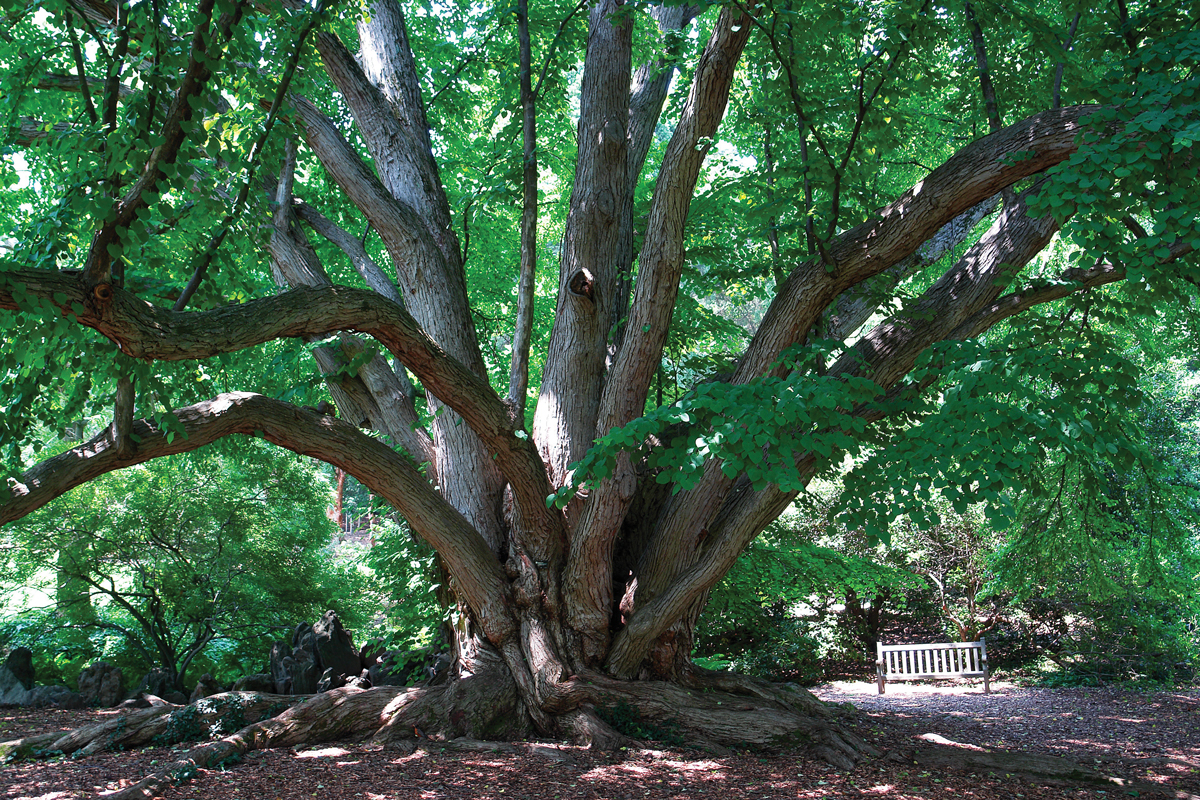 I planted one decades ago and have enjoyed its many attributes. Make no mistake, this hardy Asian native should be given some space. It has a good pyramidal form when young but slowly becomes wide-spreading with age (not unlike many gardeners). I have seen very old specimens over 40-feet tall with equal spread. 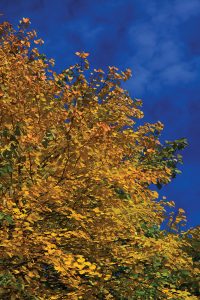 But katsura is a jokester. As the leaves turn color and drop in the fall, they give off a subtle sweet smell. I think it smells like cotton candy; others say maple sugar or ripe apples. What makes the aroma more interesting is that it is hard to locate. You can pick up individual leaves and try to smell, but you won’t be able to. Instead, you smell it when you walk near the tree as its subtle aroma drifts through the air. But a few feet further, and it’s gone. It definitely adds delight to leaf clean-up.

Plant a katsura in full sun, and only in the spring, but don’t let it dry out as it gets established. Did I mention that it has very attractive shaggy bark as it ages? The roots are superficial and wide-spreading; don’t plan on growing turf under it.

Katsura has minimal wildlife value; the benefit to the gardener is shade, which can lower energy costs. It has no pests or diseases. And, it is not invasive like the ubiquitous shade tree, the dreadful Norway Maple (Acer platanoides). 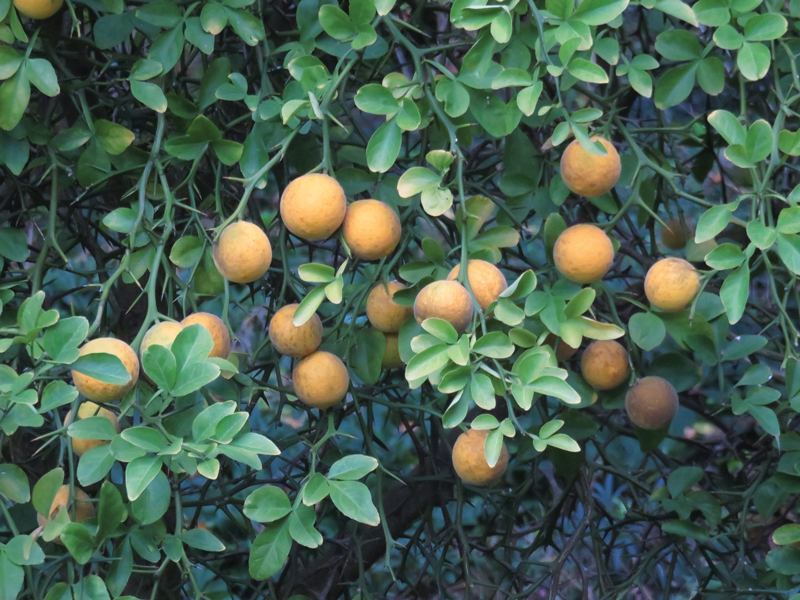 The common name is deceptive. By fall, Poncirus produces aromatic, eye-catching fruit that is technically edible but is definitely unpalatable – very seedy and acidic. Although it is reported that one can use the zest and pulp to make marmalade, I think it would be a tedious waste of time. Left on the tree, the golf-ball-sized fruit persists into early winter. 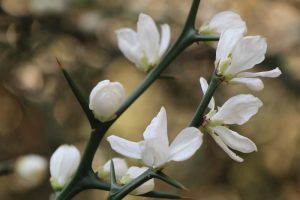 This small thorny tree typically grows to 10 feet (sometimes higher). As Latin scholars can deduce from the species name, the leaves are three-lobed. They are glossy green throughout the growing season and fade to yellow-green before dropping in the fall.

In spring, fragrant, white, four-to-seven petaled flowers (to 2-inch diameter) cover the spiny stems. Well, actually, the densely branched stems have long vicious thorns. Deer know better than to approach it. Be sure to wear a hat when weeding under it!

However, the glossy rich green color of the stems and thorns provide interest throughout the winter. I’ve seen the branches used for interesting arrangements and in Ikebana.

Be sure to clear away the fruit as it drops unless you’d like seedlings to share or plant elsewhere. It makes a very effective hedgerow plant that is virtually impenetrable or can be trimmed into a low, very effective obstacle if the neighbor’s cat is a problem. There are no pests or diseases.

I’m suggesting its use as an accent and an unusual trouble-free plant (unless you tangle with the formidable thorns). There is a selection usually sold as ‘Flying Dragon’ that has particularly distorted stems. 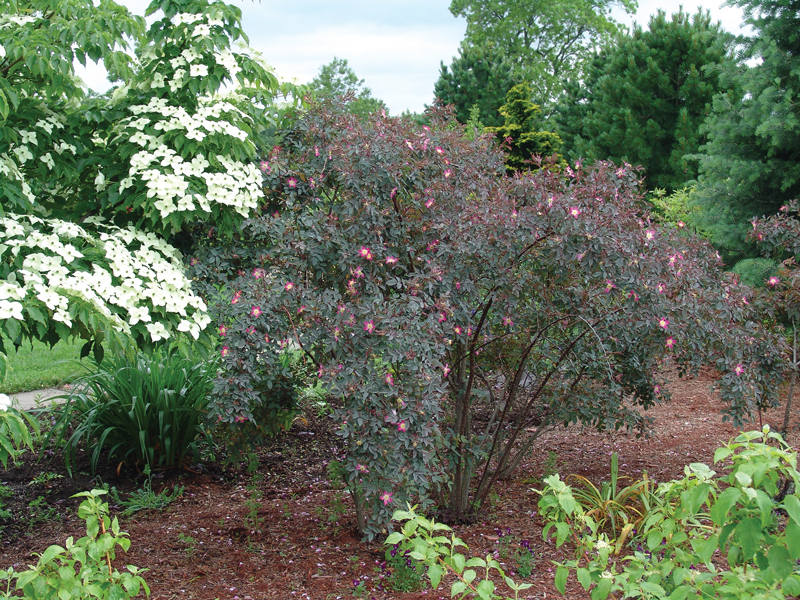 I do not grow roses. It’s probably because I’ve spent decades dealing with the invasive multiflora rose that is everywhere throughout Lancaster County’s woodland edges. Also, I consider garden roses “chemically dependent” since most require a spray regimen to avoid the common foliar diseases to which they are so susceptible. Not to mention the lack of fragrance.

However, the shrub rose, Rosa glauca, is an exception to these grievances. It is a vase-shaped deciduous shrub that can grow to 6 feet with an equal spread in full sun. It has soft pink, single, slightly fragrant five-pedaled flowers in early summer in full sun.

Flowers are followed by abundant showy orange-red hips that ripen in fall and usually persist well into winter when the birds will harvest them. The reddish-violet canes have very few thorns. The shrub can be pruned as desired in late winter. It can also be grown as a hedge.

Almost more than for the flowers, I think its best ornamental feature is Rosa glauca’s attractive dull pewter-gray-green-purple foliage. (Sorry, the color is impossible to describe.) Grow it, and you’ll understand its magic. 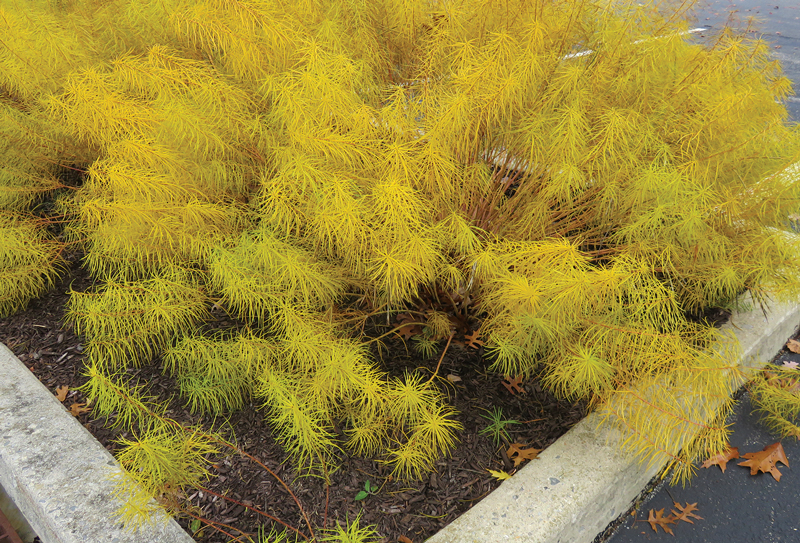 There are many reasons to plant this native perennial – even better, a mass of them. It is an erect, clump-forming plant 2-3 feet high with equal spread. It is primarily grown in gardens for its luminous blue spring flowers, feathery green summer foliage and especially its golden fall color.

The blue, 1/2-inch star-like flowers appear briefly in terminal clusters in late spring on top of the stems and attract butterflies. The feathery, soft-textured, needle-like leaves are bright green in spring and summer but turn bright gold in autumn. The stems move about gracefully with the wind.

Grow in full sun to part shade. Deer don’t browse. There is almost no maintenance since the foliage dries up and disappears during winter. I repeat: very effective when massed.

Please stop planting Miscanthus. Despite its widespread popularity in garden design since becoming widely available in the past two decades, it has turned out to be invasive in farmland meadows and native woodlands here in Lancaster County.

Instead, try Japanese forest grass, which stays in clumps. Gracefully arching, linear-lanceolate, bright-green leaves (to 10 inches long and 3/8 inches wide) form dense, graceful, spreading, cascading mounds to 12-18 inches tall and to 24 inches wide. True to its common name, Hakonechloa (hah-koe-neh-KLOE-uh) is best grown in humusy, consistently moist, well-drained soils in part shade. However, it tolerates close to full shade. The foliage will burn in full sun locations. Trim foliage to the ground in late winter or early spring before the new shoots emerge. Propagation is easiest by division. 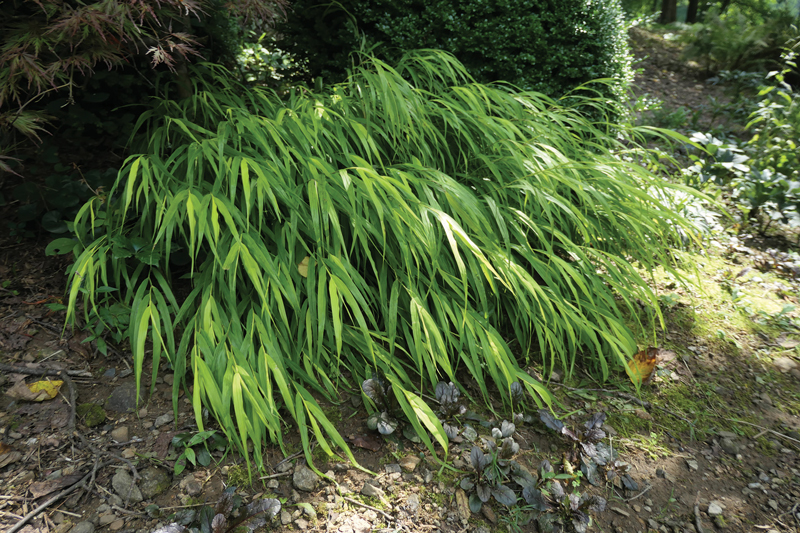 Use this choice spreading ornamental grass as a shady groundcover or accent for woodland gardens. It is very effective along shady paths and walks. Or feature it sprawling over rocks or in containers. The clumps spread underground by rhizomes, but it is not invasive. There are no serious pest or disease problems. It will grow under a black walnut tree and tolerates air pollution.