For years I’d driven past the Ephrata Cloister’s welcome signs. Years turned into decades. I wondered why I didn’t know more about the Pennsylvania Historical and Museum Commission site that sits less than a mile down Main Street from downtown Ephrata. I reached out to museum educator Michael Showalter to find out more.

MYSTIC: noun A person who tries to gain religious or spiritual knowledge through prayer and deep thought.
Merriam-Webster dictionary

“This was the town back in the 1700s. The town all around us doesn’t show up till the railroad comes 100 years later,” explains Michael as he leads our tour group down a brick pathway that runs through the “center” of town, a collection of buildings dating back to the 18th century.

Everything on my left is original, built sometime in the 1740s and ‘50s. On the right stand reproductions of a stable, maintenance barn and an amphitheater built in the 1970s for special programs. Michael, dressed in the traditional white robe worn by Cloister founder Conrad Beissel’s followers, stops at a spot on the grounds where two enormous – for the time they were built – buildings converge.

“Today, people come to Lancaster County to see the Amish. Well, in 1750 we all lived like the Amish. This was different, so tourists were coming, but they didn’t know what they found – celibate men and women wearing white robes – just like in a cloister. So, it was visitors who stick that label ‘cloister’ onto the place. Nobody here used the word cloister. It was just a town,” notes Michael as he turns and leads our group toward a cluster of structures.

Michael has been with the Cloister since 1980. He seems extremely comfortable in the character he is portraying as he leads us into Saron, the Sister’s house. Members of Beissel’s following lived separate, celibate lives. The men lived in Bethania, which is now only discernable by a grassy outline of the former building. The women lived in Saron, a four-story building with a steep, shingled roof. Saron was separated from Bethania by Beissel’s house and the five-story meetinghouse called the Saal.

I duck to avoid hitting my head on the low entryway and make my way to Saron’s kitchen area.

I will not give sleep to mine eyes,or slumber to mine eyelids, until I find out a place for the Lord, a habitation of the mighty God of Jacob. Lo, we heard it at Ephrata; we found it in the fields of the wood.
–Psalm 132:4-6

1 communal meal per day was a practice centered on Beissel’s belief that “time on Earth is time to get ready to go to Heaven.”

“You won’t need to eat when you get to Heaven, so you learn not to eat too much while you are here on Earth,” says Michael, now standing by the fireplace used for cooking. (Believers wouldn’t need to sleep in Heaven either, so rest was minimal and a block of wood served as a pillow.) A wooden table with built-in shelving sits in the middle of the room.

Awake since 5 a.m., the work day for Beissel’s followers came to a halt at 9 a.m. for prayer and a snack, if it was really necessary – because Beissel understood the human body may need more nourishment than a single meal. The main dinner was served at 6 p.m. and was mostly vegetarian; meat was a luxury and distraction from prayer. A typical meal may consist of barley boiled in milk, pumpkin mush, bread and butter, and water.

2 Maintenance men take care of the 28-arce historic site. The grounds are well used. As we passed in and out of buildings on the tour, loved ones lined up and posed for family pictures. Engagement pictures were being shot in front of the Weaver’s House, with the lush grass providing a natural backdrop for blooming romance. There are no fees for making the Cloister the setting of this year’s family Christmas card or other special announcement, but the managing entity, Ephrata Cloister Associates, asks for a kind donation. (Professional photographers, however, will need to be familiar with Cloister policy.)

8 Buildings on the property stood five stories tall. At the time, the size of the average house in Lancaster County was a story and a half. “In the space of 11 years, they built eight buildings of this size. That’s amazing!” exclaims Michael back outside of the Saal. “That was like a skyscraper when they built it back in 1741.”

The Saal was the meetinghouse and served as the worship hall for the Sisters. The Brothers had their own similar building. A midnight worship was held every night in the Saal as parishioners awaited the second coming of Christ.

Here, the Sisters also perfected religious song and wrote more than 1,000 pieces of music in daily schooling at 7 p.m. Some musical symbols are still unidentifiable to this day, but over the years the caretakers have gathered two dozen pieces of music now used by the Ephrata Cloister Chorus. Under the direction of Martin Hinkley, the group of volunteers performs arrangements for special educational programs.

The Saal, which is acoustically perfect, was one of 30 to 40 active buildings on the original 250-acre town. Not everything survives today.

9 Original buildings stand on the grounds today. Beissel’s house, Saron (the Sisters residence) and the Saal make up the majority of the guided tour. The Saron Bake Oven was built in the 1820s and stands nearby the Physician’s House and another Small Bake House, which also operated as a laundry. The Weaver’s House and the Bake House – with a historic squirrel-tail oven – stand near Beissel’s final resting place. The Printing Office saw a lot of action in its day.

25 Capital letters make up the unique set of Fraktur letters – an intricate font resembling folk art – used at the Ephrata Cloister. I and J are one letter used interchangeably.
“Ephrata has its own unique style, so you can always tell if something was made here,” explains Michael, who says the operators of the museum must bid on the open market against private collectors and other museums for Cloister relics when they come up for sale. He points to a large Fraktur script hanging on the wall in the center of the Saal. He asks me and my companions to guess the identity of the first, biggest letter. We guess K, H, and B twice. The letter in question, to our astonishment, is G. What follows is an exercise in futility as we all try to decipher a series of letters that are presented to us.

1,500 pages comprized The Martyr’s Mirror, which was the largest book printed in America before the Revolutionary War. Commissioned by prominent Mennonite leaders, The Martyr’s Mirror is an account of early, persecuted Anabaptists. Early Ephrata residents made their own ink and paper. They printed and bound 1,300 copies of the tome. The three-year project culminated in 1751. The Cloister archives hold 10 original copies of The Martyr’s Mirror.

1691 is the year Conrad Beissel, founder of Ephrata, was born in Eberbach, Germany (the twin city of Ephrata today). Beissel’s Germany was devastated by almost 100 years of war. He left his hometown and traveled the countryside where he eventually learned the craft of baking. As he travels he meets people with new ideas of religion and ways of living. While he likes some of the ideas, Beissel doesn’t quite fit in, so he voyages to a land of religious freedom – Pennsylvania. Beissel arrived in the U.S. in 1720 and lived for a while in Philadelphia before heading to what Michael describes as “the wild west.”
“Lancaster County, this was the frontier,” he explains, while standing in the small home of the religious leader. The building is centrally located in the heart of the Cloister.

To put time into perspective, Michael offered this comparison: George Washington was born in 1732, which is the same year Beissel came to live in Ephrata. Beissel was well liked, and the people who followed him eventually built the town of Ephrata.

1768 is the year in which beissel died. He is  buried in God’s Acre, the cemetery visible to modern travelers along Route 322. His gravestone reads: “Here rests offspring of the love of God” and calls him by his baptismal name of Friedsam.

1777-78 that winter, sick and injured soldiers arrived in Ephrata following the Battle of Brandywine (September 11, 1777). It is estimated that 260 soldiers were cared for in Ephrata, 60 of whom succumbed to their wounds as well as disease. It is believed that a dormitory and a schoolhouse that once stood on the southern edge of the property served as an army hospital and were later destroyed in order to prevent the spread of disease. Archaeological excavations conducted from 1999 to 2001 in the vicinity of what is now Mount Zion Cemetery revealed medicine vials, as well as gunflints and buttons.
Ephrata’s role in the Revolutionary War was memorialized in 1902, when a monument was dedicated in Mount Zion Cemetery.

1813 is the year the last of the Brothers and Sisters died. “And, this brought an end to this whole way of life,” remarks Michael in a solemn tone. The married members of the community, who lived beyond the property’s boundaries, still existed and continued some of Beissel’s teachings, including Saturday Sabbath and adult baptism. They worshiped in the Saal as the German Seventh Day Baptist Church.

1941 is when restoration of the grounds began as volunteers replaced siding, roofs and windows using original tools and methods from the 1700s. “In 1941, some of the last members helped the state purchase the property. It was decided to save all of this as a way to remember William Penn who was known for his religious tolerance,” Michael explains, asking us if we would like to sleep using a wooden pillow like the Brothers and Sisters. “Beissel had some unique ideas. Maybe some you may not agree with, but those were their ideas and they stood by those ideas. You have to admire them for that.”

“In the 1950s there was a major landscaping program here to turn this all into a park,” Michael says while walking the brick path from building to building. The current path does not depict how roads traveled into and out of Ephrata in the 1700s. “They wouldn’t have had grass. They wouldn’t have had trees. They would have cut it all down for gardens and fields,” he points out.

Of the original 250 acres, about 80 were cleared for farming. The original Ephrata stretched from where the Cloister stands today south to incorporate what is now the Ephrata High School and the Ephrata War Memorial Field.

2008 is the year in which the last member of the German Seventh Day Baptist Church died. 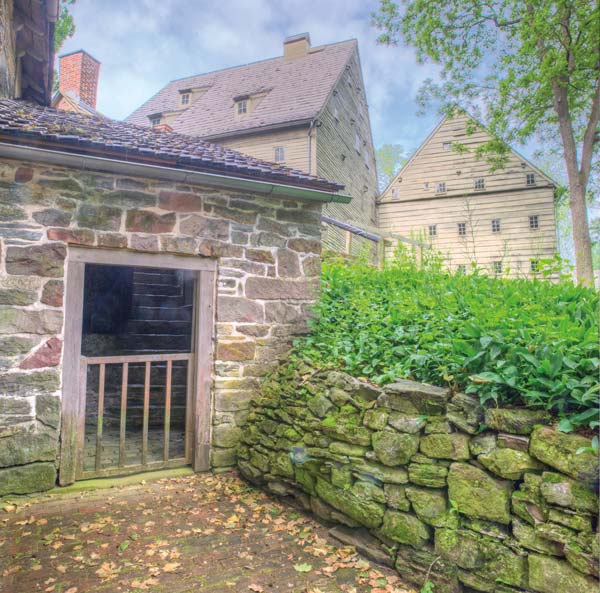