Annie Bailey’s Irish Pub & Restaurant will celebrate its 10th anniversary in April, but to many it seems that the pub has always been a part of Lancaster’s downtown dining scene. Perhaps that is why so many couples have made it a part of their wedding festivities.

The charm and strong brand that was created by the pub’s Irish founders – including John Keane and Martin Donnelly – are what attracted brothers Joshua and Jake Funk to purchase Annie Bailey’s in August 2013.

Modeled on the pubs that can be found in Victorian-era buildings throughout Dublin, on this side of the pond Annie Bailey’s perfectly complements the building it calls home. Built in 1890, the downtown landmark was previously occupied by a men’s clothing store – Sayers, Scheid & Sweeton – that once served generations of Lancastrians.

When the Funk brothers, both of whom are graduates of Penn State’s hospitality program, purchased the restaurant, they stayed true to the ambiance that was already in place. The hand-crafted bar was created by skilled tradesmen in Waterford, Ireland. Much of the furniture was shipped from County Armagh, and the bric-a-brac was painstakingly collected throughout Ireland. “A lot of the changes we’ve made were to the back of the house,” Josh explains, alluding to replacing or enhancing equipment. “We redid the front façade this summer. We’ve also added more taps. This is truly a great property, and we’re proud to be owners of a restaurant that’s a part of downtown’s vibrant restaurant scene.”

The inviting pub atmosphere envelops you as soon as you walk through the front doors that formerly adorned the Shelbourne House Hotel in Dublin and into the bar area that also features an exposed brick wall and several high-top tables. There’s a small seating area in what was once a storefront window.  A gas-fired stone fireplace lends cheery warmth to the area on cooler days. The wooden floors exude their own special patina.

The dining area, which is located to the rear of the pub, is infused with warm light that spills in through the long windows and doors that open onto the large patio/deck. The deck has its own full-service bar and a fireplace. The main restaurant/pub seats approximately 80. The second level contains a special events venue with its own bar and seats up to 100 guests. It’s also used for overflow seating on weekends.

As you might guess, Annie Bailey’s has always been a popular destination for wedding festivities, i.e. bachelor/bachelorette parties, pub crawls, rehearsal dinners/parties, and after-party gatherings. “We benefit from being so close to the Marriott. There are a lot of weddings and receptions there, and people come here for rehearsal dinners or to gather after the reception,” Josh explains. “The area in the window and the area to the rear of the restaurant are perfect for those types of events. The upstairs can be a good fit, too, depending on the size of the party.”

For such gatherings, guests can order from Annie Bailey’s catering menu or from the regular menu – an on-staff events coordinator can help with that. With regard to the menu, the selection ranges from lunch and dinner entrees to pub fare and Sunday brunch. (One recent guest, a groom from California, thanked the restaurant through an online review for helping to make his wedding so memorable. Guests who had traveled from the West Coast loved the after-party and Sunday brunch he and his bride hosted at Annie Bailey’s.)

Josh notes that while Irish staples such as shepherd’s pie and bangers & mash are still featured on the menu, other items – including small plates, flat-iron steak, kobe burgers, pasta, seafood, gluten-free, vegetarian, wings, wraps and the requisite crab cake – have gradually been added in order to expand its scope and stay in tune with today’s dining trends. A rotating weekly special features mac & cheese with a twist (creole mac & cheese or brisket mac & cheese). “We look for ways to take traditional items and make them fun,” he says.

Of course, one expects to find a selection of spirits at an Irish-style pub, and Annie Bailey’s doesn’t disappoint. Josh reports there are 23 beers on tap – eight taps are dedicated to standards such as Miller, while the other taps rotate. There are also 70 bottled varieties available. Traditional Irish brews from companies such as Guinness (bartenders do the “perfect pour”), Smithwick’s Irish Ale and Harp Lager are star attractions, but there is also a variety of craft brews available. There are also nearly 60 whiskeys (including traditional and craft Irish whiskeys) to sample.

While Annie Bailey’s is a great place for wedding-related gatherings, there are a number of other venues to consider, including:

■ Tellus360, 24 E. King St., Lancaster. 393-1660 or tellus360.com. This Irish pub and events venue is fast becoming a popular choice for private parties, class reunions and wedding festivities. One of Tellus360’s event venues offers a green roof overlooking the city. Groups of varying sizes can be accommodated. Small groups are welcome to walk in and enjoy the pub’s variety of entertainment, while larger ones can reserve a space and customize their event with food and a private bar.

■ The Vineyard at Grandview, 1489 Grandview Rd., Mount Joy. 653-4825 or thevineyardatgrandview.com. Grandview is now accommodating weddings and receptions. For pre-wedding showers/gatherings, a private tasting room is available. During the spring, summer and fall months, live music is offered on the expansive deck. The views are spectacular!

■ Speaking of wine, you could put a vino crawl together and sample the flavors of several area wineries. Hire a limo for the day and explore one of the region’s wine trails. We’d advise that you make arrangements with the wineries ahead of time.

■ Pub crawls are always popular. Lancaster is an obvious choice for designing such an outing, but with the reopening of the Railroad House and the debut of Nick’s Bistro in Marietta, this riverside town, with its wide variety of pubs and restaurants, would make for a fun and walkable destination for bachelor and bachelorette parties. Again, make arrangements beforehand. 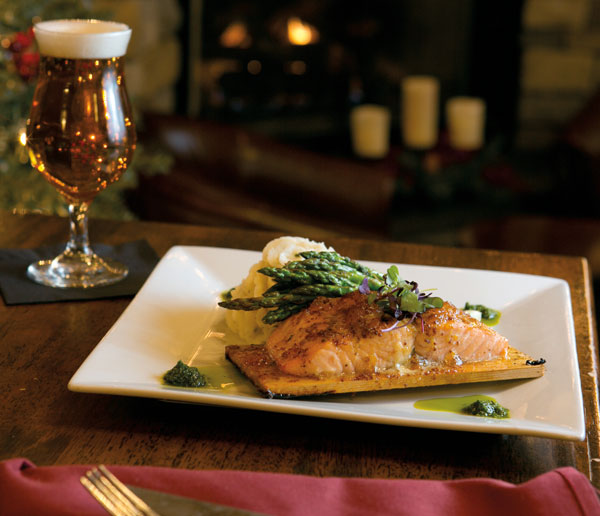 The flavor of the grilled Cedar Plank Scottish Salmon is enhanced with herb Dijon and apricot glaze. Accompaniments include chive whipped potatoes and grilled asparagus.