Imagine Covid doesn’t exist and you have a day off from work. You are free to spend the day doing exactly as you please. Inspired by U2’s It’s a Beautiful Day – “It’s a beautiful day, don’t let it get away” – we asked Marshall W. Snively to describe his perfect Lancaster County day.

Born in Hagerstown, Maryland, Marshall earned a bachelor’s degree in architecture from the University of Maryland, College Park. After graduating, he quickly realized that his love for architecture and urban environments ignited a desire to support the growth of historic cities. Subsequently, his career has always revolved around the strengthening of urban communities.

After college, Marshall moved to Baltimore, a city he frequented regularly with his family while growing up. “I remember when the National Aquarium and Harbor Place were under construction and opened,” he says of the projects that were key to the revitalization of Downtown Baltimore 40 years ago. “I’m proud that I contributed to the growth of the downtown and the extended waterfront area over my 15 years in Baltimore,” he says of serving as vice president of economic development and planning at Downtown Partnership of Baltimore, a nonprofit business-improvement district. In his 10 years at the Downtown Partnership, he spearheaded the development and implementation of strategic plans for both business and economic development initiatives.

Before his move to Lancaster, Marshall served as special projects director for Struever Bros. Eccles & Rouse (now Cross Street Partners), a real estate development company focusing on restoring and strengthening existing urban communities in many cities along the East Coast, through the redevelopment of historic properties and in-fill new construction.

He lives in the city with his partner of 18 years, Paul Gibbs. Both are avid travelers, self-proclaimed foodies and Baltimore Ravens fans. 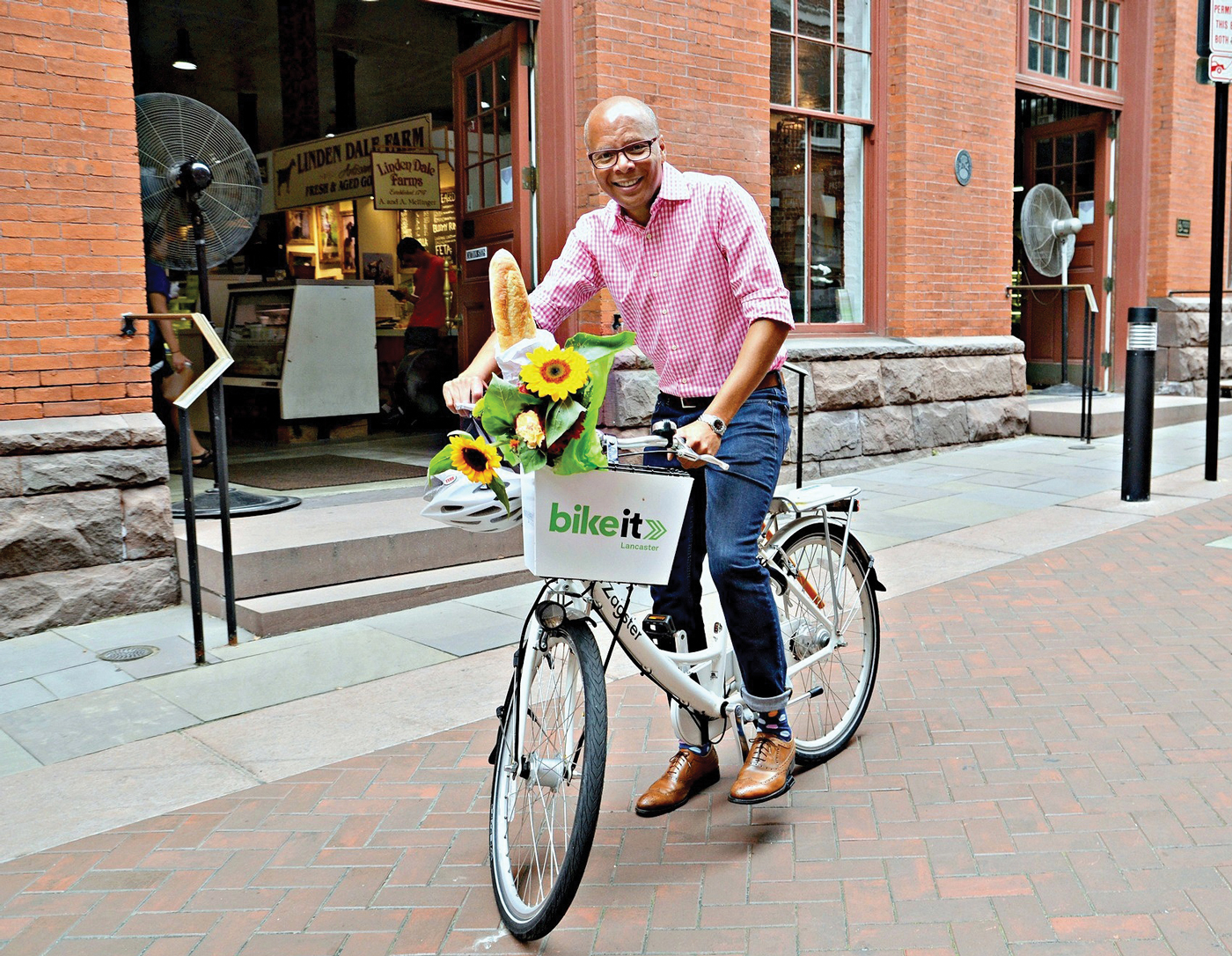 The Role of the Lancaster City Alliance

Created in 2013, the Lancaster City Alliance (LCA) represents the consolidation of two nonprofit organizations: the James Street Improvement District and the Lancaster Alliance, both of which were dedicated to community and economic development for the City of Lancaster. With a focus of empowering neighborhoods and setting the stage for increased investment, Lancaster City Alliance was charged with the development of Building On Strength, the city’s 15-year economic development strategic plan. Now in its sixth year, implementation of that plan remains one of LCA’s largest bodies of work.

Perhaps the most visible aspects of LCA are the red-shirted Bike Ambassadors and blue-shirted Clean Team members who work hard every day to ensure that the city is welcoming and clean.

According to Marshall, “Lancaster City has seen extraordinary growth over the last 15 years and we want to see that continue. Not only in Downtown, but throughout the city. Our work to enhance communities through partnerships with residents and small business owners is significant and through initiatives like our façade-improvement programs and entrepreneurship assistance, we are seeing great success. Everything we do is based on collaborations. We are truly an ‘alliance’ and we are able to leverage the support we get from our many partners, as well as our corporate, small business and resident investors to make a big positive difference in the city. We have a small but mighty team, all of whom are dedicated to the mission of LCA and that shows in our results.”

In His Own Words: Marshall Snively’s Perfect Day

It should be no surprise that my perfect Lancaster County day is city-centric. With the huge influx of investment over the last decade, the growth and diversity of our city galleries, boutiques, cultural institutions, bars and restaurants make it very easy to have a perfect day, if not week, in Lancaster City.

I’d start and end my day at home. When Paul and I renovated our city home, we included a rooftop deck. While they’re very prominent in Baltimore, at the time we didn’t see a lot of them in Lancaster City. It’s become our favorite place to relax and entertain. On a perfect day we would start and end it on the deck, especially if there is a game or event at Clipper Magazine Stadium (unless we are at a game), as we have the perfect view of the fireworks.

One of our favorite things to do is take a casual stroll to Downtown, stopping at galleries and shops – with several pit stops for small bites and a cocktail along the way. Especially on a nice spring, summer or fall day, our stops would include several of the many outdoor or rooftop options throughout the city. Those who know us are aware that we are fans of the perfect Tito’s dry martini and our favorite bartenders usually have them at the ready.

If it is a nice Saturday, we would start with a trip to Central Market and then enjoy a Bloody Mary somewhere nearby. After dropping off our loot, we’d make our way back to Downtown – sometimes to meet friends, but always knowing we will run into people we know along the way.

A perfect weekend would start with a First Friday or Music Friday. A perfect week would include a show at the Fulton Theatre and our weekly Thursday date-night dinner.

But honestly, one of my most favorite things to do is to bring friends to Lancaster – especially those who have never been here before. Without fail, they are always blown away and instantly become ambassadors. After all, there is always something new to explore in the city, whether it’s a new store, bar, restaurant, exhibit or show. The city never disappoints and we feel really blessed to live here. The sense of community is unparalleled and the support that continues to be shown for our businesses that make Lancaster so special – even after the challenges of the last year – speaks to why our community is so unique and why I am so happy to live here and play a role in the continued growth of such a special place.